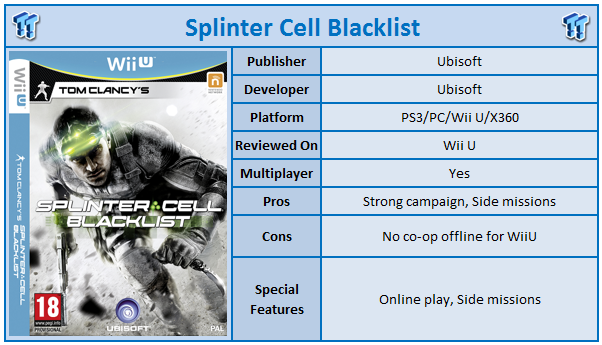 Given the size and popularity of the Splinter Cell franchise, it's hard to fathom that this is only the second game to be released in the current generation of consoles (aside from the Wii U, which is of course Nintendo's next gen). However, when you look back at some of the changes that Conviction made and how many gamers were not fans of those changes, it's easy to see why Ubisoft has taken its time. Blacklist is certainly not a return to the old school Splinter Cell, but is instead a mix of Conviction and its predecessors. It's a game that gives a lot of choice in how you play, and if Ubisoft wanted a balance between stealth and action, then they achieved their objective.

The storyline of Blacklist focuses on funnily enough the Blacklist. The Blacklist is a series of terrorists and planned terrorist attacks being led by one major terrorist group known as "the engineers". After a successful terrorist attack, Sam Fisher is thrown onto the case, along with some of his old crew like Anna and some new characters that enhance the storyline well. The days where Sam was a single killing machine are over, and instead you now have a lot more of a relationship with your staff and see how all the puzzles fit together for a successful mission.

One of the biggest changes to the series is the ability to upgrade structures. The main base of Blacklist is the Paladin, a large US air force plane, which contains the operations center for Sam to get the job done. As you progress through missions, you earn cash that can be used to upgrade the Paladin. For example, if you upgrade the infirmary, Sam will have access to purchase health upgrades, whilst upgrading the tech side will lead to access to black market weaponry. How you wish to play is up to you and this is the theme of this game. Ubisoft has tried to cater to everyone and no more so than the upgrade system. Sam can also be upgraded and you can have multiple load outs. 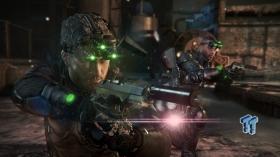 In terms of the gameplay, you can play how you choose. Ubisoft has spoken many times about how they wanted to bring back the true stealth of the series, but there is a few missions that puzzle us with regards to these statements. In fact, one of the campaign missions is closer to a Call of Duty mission than a typical Fisher mission. We are almost certain it's impossible to go through this game without killing enemies, although the game does encourage stealth, especially at the higher difficulty levels.

If you play in a stealth style, you are rewarded for it. You will gain cash for exploring areas of the mission that generally are only found on a stealth play through and you gain more cash for taking down enemies silently than in combat. Yet generally the way most people will play is a combination of both. That is aside from a few specific areas in the game where there is not much of a punishment for being detected, and as long as you can take the enemies that will charge at you down, the mission will continue on and even then you can just run towards the objective to progress as well. Once or twice we just bolted for the next objective, and as soon as it was reached, the previous enemies stood down and stopped following - not the most realistic AI in that regard.

It's hard to criticize Ubisoft because they have crafted an incredible experience. The old feeling of Sam being one of the toughest bastards on the planet returns, and as you silently take out enemies, it feels rewarding. It feels much more rewarding to creep through an area undetected, instead of just shooting the place up and that plays right into the hallmarks that makes Splinter Cell the franchise that it is. As well as this, many of the locations you visit are iconic, and there is one particular mission that gave us the same feeling the CIA mission did in the very original game. 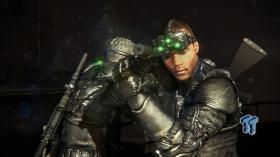 It's clear that Ubisoft is pushing the stealth style of play with the perfectionist mode removing the mark and execute feature, which returns from Conviction, but the upgrade system they have implemented is not without its problems. First of all when you begin the game the technology available to you is quite low and you have to rely on basic tech like night vision, for example. As the game wears on, you can upgrade to new technology, but it seems like the AI systems do not necessarily react to this improved tech. You will probably find the missions towards the end of the game easier than those which open the campaign. Of course that can also be attributed to the fact by the end you are well back in the Splinter Cell mode and accustomed to the game mechanics.

It would be remiss of us not to mention the control set especially considering we played it on the Wii U - the good news is the controls have ported just fine. The touchscreen is used in many ways and not just for a map. If you are controlling a drone that will be done via the touchscreen, whilst switching weapons quickly and easily can also be achieved on the tablet. It is also possible to play the game entirely on the tablet. By default, motion controls are enabled, and we found that frustrating and it increased the difficulty on some missions. Thankfully you can turn that off. 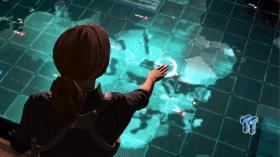 As you progress through the game, you also begin to unlock side missions from the other characters. These missions form the co-operative section of the game, however, they can be tackled solo as well, and in many ways these missions really help the game. The major issue that this can overcome is that the single player campaign isn't that long, however, these optional missions give you the opportunity to do so and in fact it makes sense to do so. Many of the missions slot into the storyline quite well and although they can be played after the campaign is done, it does seem disjointed when doing so.

On the multiplayer side of things the infamous spy's vs. mercenary's mode is back and better than ever. For those unaware in Spies vs. Mercs one team plays from a third person perspective, whilst the other, the mercs, play first person. The spies have to complete single player style objectives, whilst being hunted by the mercenaries. During its time it was one of the most original and interesting multiplayer features around, and it remains so. The only problem with multiplayer specifically on the Wii U is that local co-op is not possible.

Tom Clancy's Splinter Cell: Blacklist sure took its time to come out, but the wait has been worth it. The single player campaign is an interesting tale of typical intrigue from the series, whilst the additional co-operative play and multiplayer areas really add up to a well-rounded package. The Wii U port is fine when compared to the other consoles, and the lack of Wii U local co-op shouldn't be missed too much.