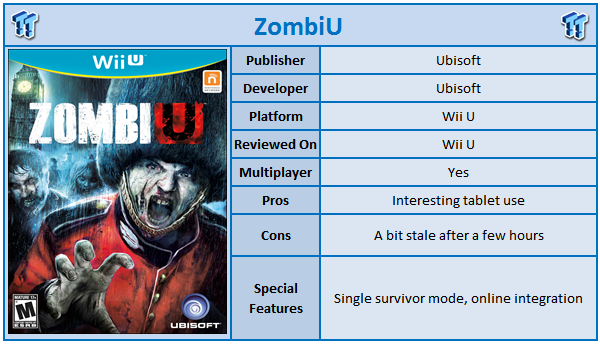 When the Wii U was first announced back at E3 2011, Ubisoft was one of the first companies to jump on board the Nintendo train of hype once again. Never one to shy away from console launches, they announced a cartoon alien game that in the long run never came to fruition. However, what it did leave us with was ZombiU, an interesting launch game that is possibly the only game that uses all of the systems mechanics well and shows why the Wii U should provide a unique gaming experience in the future. It's not without its flaws, but ZombiU is most definitely a game to play on the Wii U, even if zombie games generally are not your cup of tea.

One of the more interesting aspects of ZombiU is its lack of story. Set in London after a zombie outbreak, you wake up as a survivor in the underground with only a mysterious voice to help you. If you think this is starting to show shades of BioShock, you are correct, however the most interesting aspect is the survivor him/herself. As the popular 2012 term goes, you only live once, and no more so is this apparent in the video game world of ZombiU. 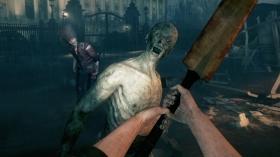 The reason is because you only play each survivor once. Whilst the game does not reset back to its initial state and progress remains, you play as a new character each time that the zombie hordes manage to overpower your character. Most of the time you will keep some of the important equipment, but other times the game will force you to go back, find the zombie survivor, and kill them to regain your gear that is required to progress.

ZombiU is not a run and gun game and it's not a game that can be played quickly. It is a tense, slow experience and in many ways show what the survival horror genre has been missing in video games for a few years now. With the knowledge that you are only a wrong turn away from being overrun by powerful zombies, progress is slow and scary. And this is where the Wii U tablet comes into play.

Whilst the Wii U tablet is like many games used to display the map of the current area, it is also used for interfacing with the game. To move items into and around your inventory you swipe and touch the screen and to bring up your backpack you do the same. The other interesting use of the tablet is the scanning of items. Hold the tablet up towards the TV and on the tablet screen, the main display will show allowing you to scan items to unlock doors or check for goods. This really is the only mature game we have played with the Wii U so far that has proven itself not to be able to be done on another system due to the unique use of the tablet.

The game is also hard. Aside from the chicken mode, this game will kick your butt over and over again. Whether you like that is a personal choice, but it does lead to a high level of reward and satisfaction when you manage to get just a little bit further the next time around. Ammunition and weaponry is scarce and should only be used in tight situations. Most of the time you will find yourself using melee weaponry and generally that means a cricket bat.

Striking with melee weaponry is about timing rather than button mashing. If you swing at the right time you can take a zombie out in two hits rather than five or so and the game slowly teaches you how to use the weaponry and the timing of that weaponry. Whilst you are thrown in the deep end, the game does give some assistance with unlocks for weapons available. Your character will level up as will the guns, but when the character dies, the character levels are dropped. This does ensure that weapon upgrades are not pointless, but some may view that as Ubisoft cheating and making the game a bit easier. It's not an easy game at all and this small concession at least makes it manageable.

The difficultly of the game comes from the placement of enemies rather than the number. They will chase you through rooms and just when you think you have escaped, they will appear right next to you. One memorable sequence was when we were crawling through a vent only to come across a zombie character. We had to quickly scramble out of the vent backwards, get out and wait for it after it followed us all the way. Moments like these are strewn throughout the campaign and every so often pop up to give a shock to the gamer. 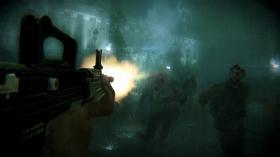 There are also some truly infuriating design decisions with this game. For example, if you find a safe house and do not go back to the starting point via the pipes to save, and if your character dies, that safe house is no longer unlocked and you need to find it again. We are not sure if this is a bug we encountered, but it did happen to us a few times. Given how few safe houses there are and how hard this game is, it's very frustrating when it happens. Also there are some elements to the game which are a bit underused. For example, you can barricade doors from being able to have zombies go through them. Throughout the game we only did this a few times, where as it could have been a very useful zombie defense mechanic.

One area where Ubisoft has done very well with is the replication of old London town itself. You visit numerous landmarks throughout the course of the game such as the Tower of London and Buckingham Palace, but as you traverse the landscape, you will also notice places such as Tower Bridge and even the Spire which is a very recent addition to the London skyline. There is no doubt that when Ubisoft chose to set the game in London that they did their research. In many ways London as a city picked itself as the venue given the storyline, but even so they have put in a huge effort to recreate one of the world's most famous cities.

Visually the game has its moments, but there are also times where you have to wonder where the grunt of the Wii U is. Having become accustomed to high definition graphics on the Xbox 360 and PS3 systems for seven years, it's nice to see a HD game on a Nintendo console. We cannot help but feel though that it would look better on the other two systems. This is clearly a launch game. The frame rate is rock solid and the animations of the zombies especially are well done, but sometimes the graphics can seem a little blocky. As mentioned before the game has its moments especially with the environments, but overall we expect to see more from the Wii U. With the little there is of it the voice acting is impressive especially that of the Prepper (the guy helping you out). This is a game that uses sound for atmosphere and cinematics rather than voice acting. This isn't a bad thing, though, as it builds the tension and the belief you really are all on your lonesome is this huge, derelict city.

ZombiU is a good launch game. We have to add that caveat. With what is available right now on the Wii U system the game is a must play, but overtime we think that the flaws of the game will be what is remembered as opposed to the game itself. It is the best use of the Wii U system yet in terms of its interaction between the tablet and the television, but that is not enough to keep it from having some disappointing elements. There are a few design decisions that really keep ZombiU from being the game it could have been, and that is a real shame.