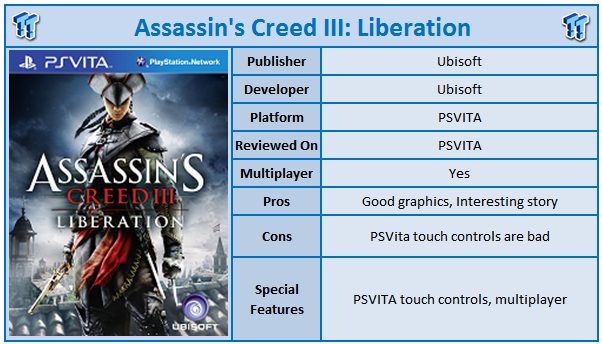 It's fair to say that whilst the Assassin's Creed II series of games were some of the most well received games this generation, the portable versions of the game haven't really set the gaming world on fire. Appearing only on the PSP (aside from the iOS games that were not 3D), the games focused on Altair, the original protagonist, rather than the very likeable Ezio.

However, with the release of a new platform, the PS Vita, Ubisoft decided to give the portable space another crack with the AC series and have come out with mixed results. Liberation is not necessarily a bad game, but there are some areas which can be quite infuriating to play.

Liberation for the first time introduces a female character as the main lead. You play as Aveline, the black daughter of a rich businessman in the 1700's. A result of infidelity, Aveline lives with her step mother and father in New Orleans as one of the wealthy and famous. However, Aveline wants to rid the world of slavery, especially for her people and sets about trying to bring down the tyranny which existed in the time. Set in the 1700's, the game takes place during the same timeline as that of the main console game, and to get the most out of the story, you need to play both. 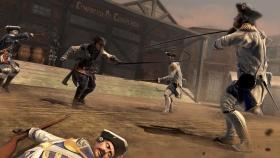 There are a few major changes for the franchise aside from the fact you now control a woman. The game introduces for the first time personas. Aveline has three; wealthy lady, slave and assassin. Depending on the persona (clothing) you are currently wearing will limit or improve the abilities Aveline has available to her. For example, in the wealthy dress, Aveline cannot climb buildings or walls whilst in the assassin clothing she will draw suspect looks from the guards right away.

As well as the main city, you will also visit the bayou of New Orleans which gives you the opportunity to partake in tree climbing and jumping. Ripped directly from the console game with Connor you can at will climb trees and often have to when completing assassination tasks. The game controls well and it's very obvious when you can and cannot climb trees. The Bayou has a very Metal Gear Solid 3 feel to it - a large, lush jungle full of crocodiles and other animals that can hurt Aveline. The main difference being that Aveline does not need to eat animals to survive.

The structure of the game takes on that of its console big brothers. The game includes nine sequences to complete which is a little on the short side and you will have this game down in around six to eight hours depending on how good you are at it. There is no difficulty setting so once you finish it, that's it really.

There are a number of side tasks to complete and there is a meta game where you can control a shipping company to gain money, but really in the grand scheme of things, you can ignore these and easily complete the game. One of the interesting elements is that the story you get if you just play the main missions is not the actual story. To get the real ending you need to take out a particular hidden character in each sequence.

One of the biggest bugbears we have with the game is the PS Vita controls. The main controls themselves are fine, but when the developer is trying to shoe horn in the touch mechanics of the game, it just starts to break. For example, the game will at times ask you to put the Vita camera near a bright light. It took us a while to find a light that would give the Vita what it wanted, and there was no indication at all whether we were getting closer or not.

There are also other sections of the game which use the back touchpad such as paddling a canoe. There is nothing wrong with trying to include Vita specific controls, but when they work like they do in Liberation (it's a lucky dip as to whether your motions will be picked up), it would have been best to leave them out.

The environments that the game is set in are impressive for a handheld product. The city of New Orleans is beautifully represented by period buildings and the actual city itself is quite large, but nowhere near what you find in the console games of course. The split of the bayou and the city is an interesting feature with both environments having graphical problems as well as also some impressive sections. Voice acting on the system is impressive especially for a handheld and whilst the soundtrack can become repetitive, it suits the game and setting well.

There is no doubt that Assassin's Creed III: Liberation is the most impressive handheld version of the series yet. Ubisoft has used some of Vita's power well, but also included some utterly frustrating mini games based on the touch and camera features. It is on the short side and that means it's not really suitable as something for a long distance trip, but for short spurts on the way to work, it works almost perfectly.