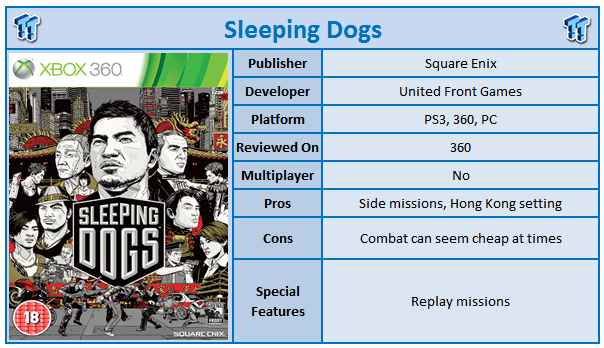 For quite some time this game was in trouble. Originally announced as a brand new entry in the True Crime series that was to be set in Hong Kong, Activision canned the project a few years back and it seemed that it was never going to see the light of day. Square Enix picked up the rights and the rest, as they say, is history. However, the game must have come a long way since the time it was dumped, as it is one of the most surprisingly polished games of 2012. It's hard to believe when a game goes through a development cycle such as the one this did, that it can turn out to be such a good game. But Sleeping Dogs proves us wrong and it just might be the first game to show Rockstar a thing or two about open world gaming.

Sleeping Dogs is set in Hong Kong. You play as a cop fresh to Hong Kong having lived in America for most of your teenage life, wanting to gain revenge on the triads who in many ways were responsible for the death of your sister. Wei, who you play as is assigned the most dangerous undercover task ever undertaken by a Hong Kong detective with the task being to work his way up in the triad gangs and ultimately bring the gangs down from within. However, the line between good and bad is often blurred in Sleeping Dogs, and many times you will wonder if Wei has forgotten his police roots.

Sleeping Dogs as expected is based on its True Crime heritage with an open world set in a sprawling metropolis. To gain missions you visit characters, get the mission and go off to complete it. It's a formula that we have seen many times before, but it is this freedom that enables Sleeping Dogs to be such a good game. The reason being those side things the game offers are actually quite interesting to play. For the first time in an open world game we found ourselves wanting to revisit Hong Kong after the end credits roll because United Front Games has done a fantastic job with the side missions.

It is possible to mainline the story quite easily (although the game does force some diversions every so often), but doing that would rob you of some of the better sides of the game and also some key story areas. For example, some of the missions where Wei is actually performing police duties are optional, but they also form some of the best missions in the game so exploring is key to enjoyment in Sleeping Dogs. 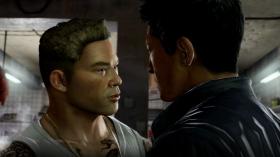 When it comes down to the missions themselves, they can feel a bit run of the mill at times. For the most part the story based missions are varied and exciting to play, but every so often a boring derivative mission such as a "˜chase down and destroy this car' mission comes along. Thankfully there is enough variety all over the game to keep Sleeping Dogs from getting stale and if the main story isn't interesting to you, you can very much take a break and return to it later.

Reason being is that Sleeping Dogs has so many things to do. Be it take on car races, and buy new cars, gamble on roosters in fights, take girlfriends out on the town or just perform some police work, there is always something to do. It is fair to say we have not seen a game with this level of scale since the likes of GTA IV.

One area where the game becomes a love/hate relationship is the combat. There has no doubt been a high level of focus on this system in development (with Georges St Pierre from UFC assisting the developers) and whilst the combat does feel more realistic and brutal, it can also be incredibly frustrating. In many ways the game reminds us of Ezio where the key to success is block, block and block some more before you get a chance to make a counterattack. Patience is key to combat in Sleeping Dogs with one false move leaving you open to a beating that just might end that mission there and then. Especially with some of the boss characters present in the game.

To assist with this you can upgrade Wei's abilities. As you perform police missions you can gain points to upgrade police based perks such as being able to shoot without recoil or jump over items better. There are also triad upgrades and a more neutral combat upgrade system. Each mission will give you points in the triad/police category depending on how you complete that mission. Finish a mission without killing someone and you will get very high police points, whilst tear up the town and smash everything up (basically the opposite of police work) leads to triad points. How you want to develop Wei is completely up to you and driven by how you play the game.

There has been some decisions made with Sleeping Dogs that just make sense. First of all each mission has a checkpoint system which lowers the frustration factor of some of the tougher missions, however sometimes the checkpoints do feel further apart than they need to be and there is no consistency in this area. One mission might have a checkpoint every 100 metres, whilst another may seem like it is a mile between checkpoints. As well as this you can replay missions you have completed allowing you to play the best of the missions over and over again.

Along with the combat system the environments and environmental damage are also impressive. When taking on enemy vehicles, for example, you are going to find it a lot easier to take them out by shooting the tyres rather than just randomly shooting. This kind of detail is what makes Sleeping Dogs the game it is and is present throughout. Another surprise is that the map of Hong Kong is pretty much entirely unlocked right from the outset. This again encourages exploration and no stupid reasons have been concocted by the developers to stop you exploring from the get go. This is a major positive.

Visually the game is impressive on the Xbox 360, but those with a PC that can handle it should go down that path. The HD pack which is available for no extra cost enables Direct X 11 feature sets and the game at its highest level of graphics; it looks like what an early next generation console game may look like. Even on the Xbox 360 the game runs quite well with nary a frame rate drop and the city is beautifully rendered. Wei and the other characters animate well. There are a number of famous people present for the voice acting such as Emma Stone and Lucy Liu, but unfortunately they are more in a cameo role rather than directly impacting the game with most of them having 5-10 lines of dialogue.

Sleeping Dogs could possibly be the first real surprise of 2012 and begins the lead up to the blockbuster season in earnest. United Front Games known primarily for kart racing games has put together an absolute masterpiece that fans of open world games will adore and play for hours and hours.

It is brutal, it is mature and it is simply a must play game.