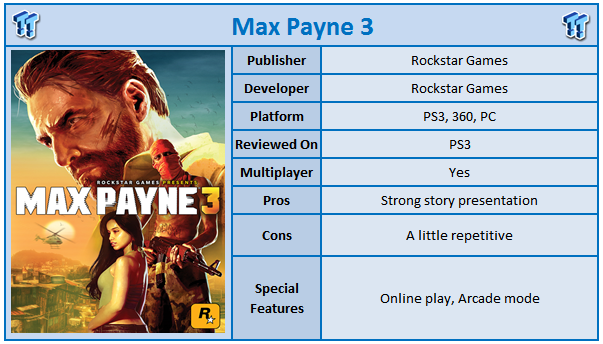 As video game characters go, Max Payne has had a tough life. Starting as a New York detective on the beat, he arrived home to find his wife and daughter murdered by the very criminals he is trying to put away. Max fell into a spiral of depression and vowed revenge.

Over the first two games we encountered Max trying to move on and learn to love again, whilst taking down the criminal syndicates that took everything dear away from him. Max Payne was one of the most awarded and anticipated games early this century and so it goes without saying that this game has been one of the most anticipated games of 2012. Could Rockstar really take the third person shooter and update it for what gamers expect in 2012? The results are mixed, but in general yes. Max Payne 3 proves that despite the numerous third person cover shooters released in the last five or so years, he still has a place in gaming and Rockstar has done enough to keep this game relevant.

Max Payne 3 picks up with Max doing what Max does best. Chugging down alcohol and taking pain killers, slowly killing himself on this cocktail of drugs. Max remains a bitter and broken man. He is out of the police force and instead working as a PMC (private military contractor) for those who have too much money to know what to do with. One even changes Max's life and realising he can no longer live in New York. He takes a job in Brazil to protect the family of a wealthy banker. The storyline is one of the strongest sides of Max Payne 3.

The reason is the presentation. Max Payne has always had a very powerful storyline and strong performances from the voice actors, but MP3 takes this to a new level. Instead of playing out in a comic book style ala the first two games, in-engine cut scenes are the order of the day and there is an aspect to this that some gamers won't like. In certain areas of the game it seems like you are losing control every five seconds. There are a lot of cinematic sequences in the game, but rather than harm the game, they add to it and add more tension to the situations Max finds himself in. To convey that you are going the right way, Rockstar slow Max to a pace making the transition between gameplay and cut scene (and vice versa) seamless. Max Payne 3 really is one of the most well-presented games in terms of story for quite sometimes, but given the pedigree of the series, this should surprise no one. 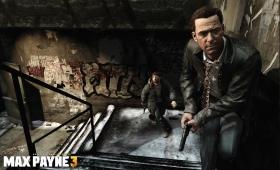 Where it matters, the game also excels. Initially when we started to play through Max Payne 3 we thought that Rockstar had potentially screwed up in a major way. How could they take the gameplay from 2003, ship it in 2012 and expect it to still be seen as a game pushing a genre forward, or at least matching it with the best. However, as time went, on this feeling eroded and we started to again experience why Max Payne is such a good series. The addition of cover to the series is an interesting one.

Whereas in the previous games you relied on bullet time and shoot dodge to take down enemies, this time around you have access to cover. However, this comes with a catch. Max Payne 3 is one of the most difficult games you are likely to play in 2012. This is not a game where you can be flanked and survive by quickly taking down the enemy. If an enemy manages to get to the side of you without you noticing, Max is already dead.

There are times in the game where you will quite literally want to smash your controller. Some design decisions contribute to this. One such item is the checkpoint system; often they are too far apart, which leads you having to play through the same lengthy section of gun fights over and over again. This is wildly inconsistent. It seems on some missions the game will save more often than others.

The positive on this aspect is that once you do finally get past a tough section, you feel a sense of accomplishment and relief. Even on the easiest difficulty, this game offers a challenge. Again this shouldn't be a surprise because this was a hallmark of the first two games with many gamers still not finishing Max Payne 2 to this day.

The gameplay itself is incredibly good. Although at first the AI can seem dumb, they do become smarter as the game progresses. Stuck in cover? The AI will rush at you rather than wait for you to build up enough bullet time. This can lead to some instant deaths and means you must always be aware of your surroundings. Max can also disarm enemies and perform a number of brutal executions.

Given that you can often run out of ammunition if you don't play well, this is a good thing. Even though the mechanic was designed a long time ago, shootdodge and bullet time remain as effective as ever. There really is nothing like diving towards an enemy down stairs shooting in super slow motion. We've seen a number of games try and take the bullet time mechanic and fail. The true owner of the feature is back and it's even in multiplayer.

One of the criticisms of the older games was the replay value was not as good as it could have been due a lack of multiplayer. Not only has Rockstar added multiplayer, they have added a new feature into single player to give some back story. As you progress through if you go off the linear track so to speak, you will find clues such as a blood stain to gain back story - a nice touch for those who want to go discovering. Some of the modes from the previous games make a return with arcade and New York minute making a comeback. Arcade puts more focus on gaining points and trying to beat scoreboards, whilst New York minute remains the ultimate challenge.

As Max shoots enemies he gains time with the goal being to finish each mission in the shortest time possible. And aside from this there is also a very strong multiplayer component which plays a lot better than we expected. The animations are fluid, the gameplay is strong and there are enough game modes to keep you happy. One disappointment with multiplayer is that some of the game modes are initially locked. The worry we have with this is if that gamers pick this up a few months down the track, no one will be playing the old game modes and so they won't be able to unlock the new modes.

Max Payne 3 uses the RAGE engine and it shows. The environments are stunning, as are the character models and the animations are some of the best in the business. Rather than magically put a gun away when you stash it, Max will either carry it or holster it. So for example if you have a machine gun and switch to a pistol, Max runs with the machine gun in his off hand. It's a small thing, but it adds a lot to the game. Rockstar is a company that revels in putting in that attention to detail and it is one reason why their games are always such a visual master piece.

The frame rate remained rock solid throughout which given some of the huge gun fights that take place is rather impressive. Although the missions are very linear as you would expect, they are lengthy and large. And as mentioned before there is a little scope to go exploring for new clues. The cinematic soundtrack suits the game perfectly (with the music dying down when Max has taken out the last enemy in the area) and the voice acting is nothing short of stunning. You can tell the voice actors really cared about their characters in this game and Max really does come across as an emotional wreck at the end of his tether.

Max Payne 3 was no doubt a risk for Rockstar. The series was looked upon fondly by many gamers and some had feelings that it should have been left back early this century, thinking that this game wouldn't translate to the next generation. Well Rockstar has proved the doubters wrong and Max Payne 3 is a cinematic triumph. Whilst the gameplay can at times be very difficult, and in some ways they haven't changed that much since the original two games, the presentation of the game is almost second to none in the genre and the animations and voice acting brings home this gritty story. You should definitely play this game. 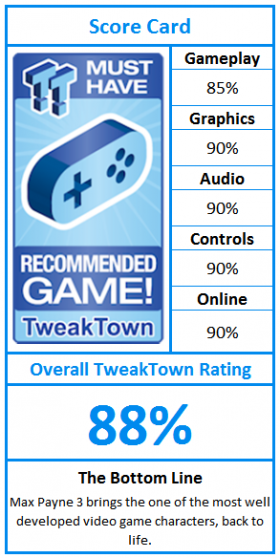