Metal Gear Solid has been one of those series that over time have come to be one of the best, most intriguing and most polished around. There have been highs and lows for the series on both the console and handheld side of things, but there are not many people out there that consider Snake Eater to be one of the poorer Metal Gear games. In fact in 2005 upon release on the PlayStation 2, it was seen as one of the games of the year, a true masterpiece and having played through the HD re-release recently, it still remains a masterpiece to this day. However, cramming all of that gameplay, story and controls into the 3DS was always going to be a major challenge. One that Kojima has met head on, and in most areas, succeeded.

For those of you who haven't played Snake Eater before, it's set during the 1960s after the Cuban Missile Crisis. The Cold War is in full effect and the US and Russia is playing a game of cat and mouse of building country destroying weapons. One particular weapon under development in Russia strikes fear in the US heart and it is up to Snake to end that threat once and for all.

However that side of the storyline is only part of the game. The other side focuses on Snakes struggle to survive in the harsh jungle and with no rations. What you find in the game world is what you can use to survive and this adds an incredibly unique aspect to the game. You as Snake must manage his stamina by eating animals found throughout the world such as snakes, frogs, crabs as well as maintain camouflage to give him the best chance of staying hidden from the enemy. 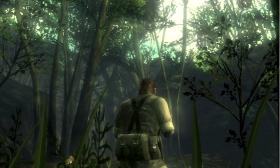 This is one reason Snake Eater was lauded back in the day. A survival mechanic that made you think about your battles and character, rather than just the action. You have to always be aware of the world around Snake. There can be mines, traps, animals that bite and poison and various other challenges for Snake to deal with.

Like all Metal Gear games, the focus is on sneaking around and making as little noise as possible to alert the enemy. Do so, and for a few minutes you will have to hide and be patient whilst the enemy realises no one is around. This is no different for Snake Eater although lethal options seem to be a bit more acceptable in this game (and for that matter MGS4) than in some of the previous MGS games.

The game has translated well to the 3DS which is quite a surprise. The PlayStation 2 was no slouch in its day and for that game to now exist, in 3D, in your hands, is quite a showing of the power of the Nintendo 3DS system. There are times where the frame rate dips of course, but these are few and far between. Most of the problems with the 3DS game come from the fact this was originally a console game and that no changes have been made to accommodate the fact this has now moved to a console where you may be playing on the bus.

One of Metal Gear Solids more controversial aspects is its lengthy cut scenes and these are obviously still present in the 3DS game. However it's not all bad news. The game can go to sleep during these scenes and pick up where it left off, and if you have played the game before they are skippable. It's just disappointing that no solution was added such as watching later to the portable game given the different nature of handheld gaming.

The other problem with the game is the small screen. When Snake Eater was first developed, it was produced for a system that generally was connected to at least a moderately large television - definitely bigger than the 3DS screen, anyway. Shrinking the game down to the small console as well as the small screen, paired with the fact a lot of the game takes place in the evening hours, makes it hard to see things sometimes. The snakes you can kill for example didn't stick out to me anywhere near as much on the 3DS game as the television versions of the game and considering you have to kill these to survive, that's a problem.

However it's not all bad news and Konami has added numerous new features to the 3DS game to try and entice veterans back into the game. You can take photos with the 3DS camera and then use those photos to camouflage Snake. Of course this completely breaks the camouflage system because you can use it to cheat your way to very, very good camouflage, but it's still an interesting use of the camera and technology.

The game also supports the Circle Pad Pro and this means that it has avoided the problems of the PSP games past. Without the CPP, the controls revert to a PSP style face buttons to control the camera, stick to control snake. The game controls significantly better with the CPP, almost on par with the console versions and so it is highly recommended you pick up a CPP before you pick this one up.

As mentioned before it's quite a feat that they managed to get this game running well on the 3DS system. And not only that, the game looks good - almost on par with its PS2 cousin. The 3D effects really bring home the world that Snake is in, although we did find some areas very difficult to play through with the 3D turned on such as the boss fights. The cut scenes have been re-done to show in 3D which means even if you have ploughed through this epic game before, it's worth doing so again on the 3DS. The music and voice acting remains as crisp and clean as on the console versions and the 3DS sound does its very best with what's on offer.

Metal Gear Solid: Snake Eater 3D is a fairly good port of a smashing console game. Of course whether you should play this comes down to a few questions. Do you want to play this masterpiece on the run? If not, then it's time to pony up for the recently released HD versions. However, if you are about to take a long haul flight, or bus trip then Metal Gear Solid: Snake Eater 3D will suit the bill fine. It's lengthy, it's fun and it's one of the best games on the 3DS so far.