Many were just expecting the launch of Intel's 9th Generation 8-core desktop consumer CPU, but Intel delivered a heck of a lot more than just that. 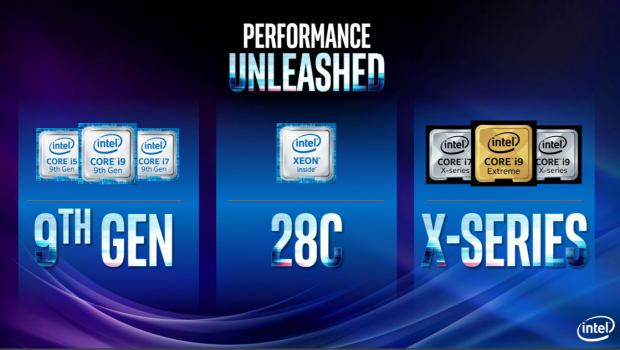 For starters, they did launch the greatly anticipated 9900K as well as her little brothers, but they also surprised many with announcements about the 28 core CPU that will launch in December of this year and a refreshed 9th Generation of X-series CPUs. 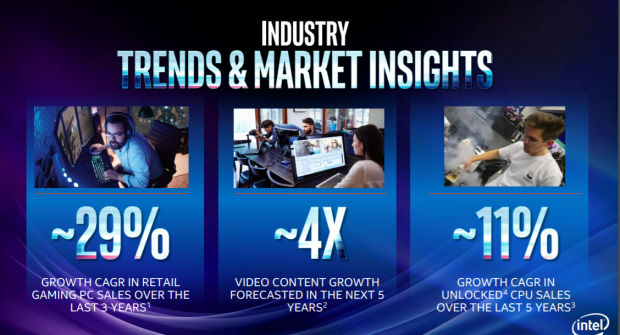 Intel talked about all the new market trends they anticipate making a huge impact on the desktop PC market, and the one that stands out as huge is gaming. They even brought in professional gamers to explain to us the impact and growth of the e-sports market they have witnessed first-hand. However, there are two more growing segments; video content growth and the demand for unlocked Xeon CPUs.

Let's pause for a second and get the new Z390 chipset out of the way. The new Z390 chipset is an addition to the 300-series chipset line up and all 8th and 9th generation CPUs are compatible with all 300-series motherboards (some might need a BIOS update) at the moment. The new chipset offers up a lot of new 10Gb/s USB 3.1 as well as an integrated MAC for WIFI that can go over a Gbit in speed. It also integrates an improved audio processor.

A rumor going around that the 9000 series of CPUs would be soldered turns out to be true. Intel calls it solder thermal interface material (STIM), and as we all know it helps a lot with cooling the CPU. It's probably part of the reason for the frequency gains.

The new Z390 chipset is a maxed out version of the H390 chipset Intel launched earlier this year.

It seems that Intel didn't want to cannibalize their i7-8700K and i7-8086K, so they opted to not give it hyperthreading. All CPUs have a 95W TDP, which was one of the most surprising parts of this slide. The cache numbers are interesting as well, as the 9900K and 9700K have the same core count but the 9900K has 4MB more cache. While prices have been kind of high online, we find that the MSRP of the 9900K is under $500 at $488. Now, here is the kicker, in the footnotes we find that these new CPUs have hardware patches for Meltdown V3 and L1 Terminal Fault.

We find that the 9th Gen core CPUs are based on the 14nm++ processor, feature a unified cache, as well as AVX2.

Here we see the comparison between the new CPUs and their 8th generation counterparts. According to Intel, there is a 10% increase in gaming performance. 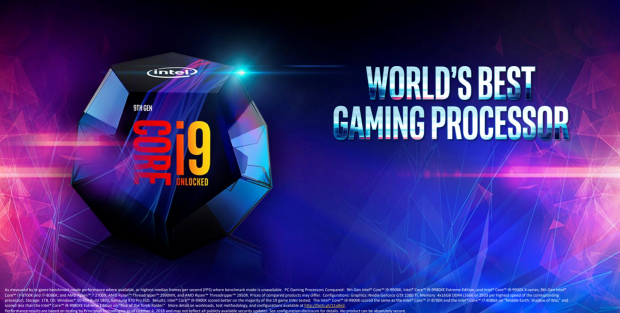 Finally, Intel has dubbed the i9-9900K the "World's Best Gaming Processor", which is similar to Skylake's "Best CPU Ever" statement during Skylake launch. Skylake's basic microarchitecture has lasted 4 generations so far and is still selling like hot cakes, so maybe Intel can tell the future. 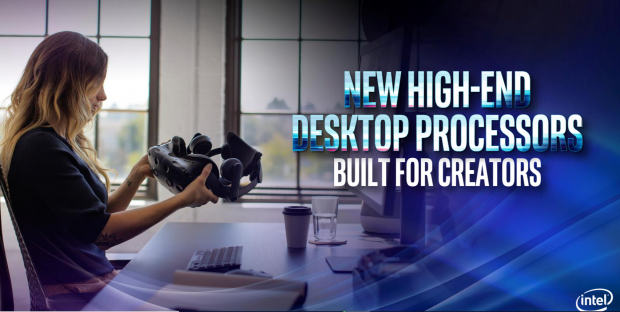 Intel has also seen demand for high-end desktop processors that sell in more niche marketplaces, and has devised two lines of CPUs to meet that demand. One of those lines includes just a single CPU.

Dubbed the Intel Xeon W-3175X, the 28 core 56 thread CPU will be a fully unlocked Xeon. It will use the same C621 chipset that current Scalable Xeon platform uses, and the CPU will feature 48 PCI-E lanes. It will also support 6 channel memory in the same fashion as the current Xeon platform, so it will have ECC and RAS support.

The TDP is 255W, but you will get a Turbo up to 4.3GHz with a base clock of 3.1GHz. It also features 38.5MB of cache. We should mention that while the 9th generation desktop processors for consumers feature two hardware fixes for exploits, this new CPU seems to be adapted from the current Xeon line, which does not. 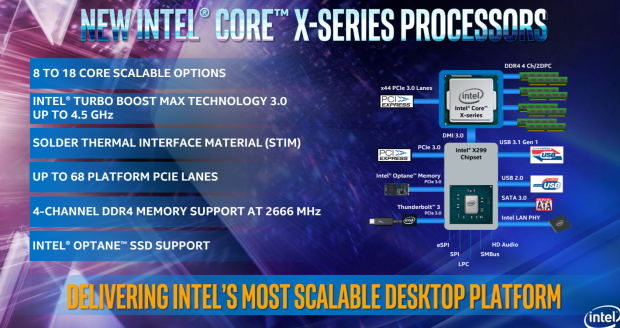 We can and will speculate widely about the price of the 28 core beast that can hit 5Ghz with a chiller, but we will instead focus on CPU's that have a material price. Here is the refreshed X-series processor platform, a much more affordable platform that uses the X299 chipset. Intel didn't drop the ball with TIM this time, instead, they will solder the new 9000 series X-series CPUs. While they keep the same core counts and PCI-E lane count, Intel has made sure that every SKU from the 8-core to the 18 core features 44 PCI-E lanes.

While some of the lower core count Skylake-X 7000 series CPUs featured TDPs at 140W, the new CPUs will all feature the 165W TDP. Core frequency has been boosted a lot, and while more base frequencies will remain around 3-3.5Ghz, Turbo Boost two frequencies have been increased to 4.4GHz for all but the 9820X. All the CPUs have a Turbo Boost Max 3 frequency of 4.5Ghz, except for the 9820X, which is an odd CPU since there is already a 9900X with the same core and thread count yet more cache. Cache sizes vary widely and don't always scale evenly with core count. Intel seems to have had a change of heart and instead of charging $1,999 for their 18 core CPU is now only charging $1,979. Like the W-3175X 28-core CPU, these CPUs do not have the hardware patches the new 9th generation of desktop consumer processors have, but we are grateful they are soldered.

Intel isn't introducing any new technologies into the new CPUs, they have just improved upon their clocking rates and have made some tweaks here and there, so you still get AVX-512. 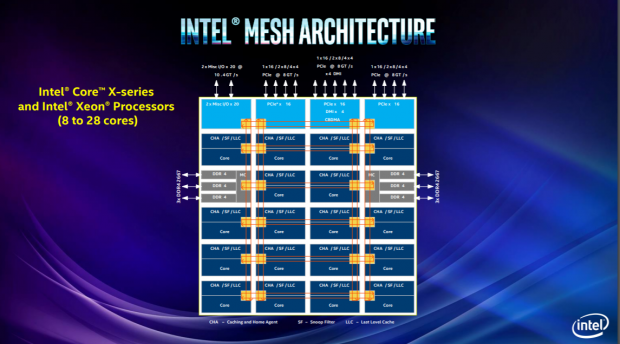 The MESH isn't anything new, but it's still very important since cores don't have to wait for other cores to finish to start working.

Here we see Intel pitting their 9980XE against AMD's 2990WX, and we can see improvements in specification applications, especially if it's a very mix threaded program that relies a lot on single threaded performance (Turbo Boost Max 3.0). We will test out the new CPUs when they are ready and pit them against what is on the market, but for now, this is a little teaser.