For many companies, portable SSDs were a vessel to purge poor selling models wrapped in a designer enclosure. In recent years that changed thanks to advances in the interconnect technologies. The pinnacle for external storage for the time being is Thunderbolt 3 with 40Gbps of throughput performance over a single commodity connecting cable. That's where we start our HP Portable SSD P800 Review today. 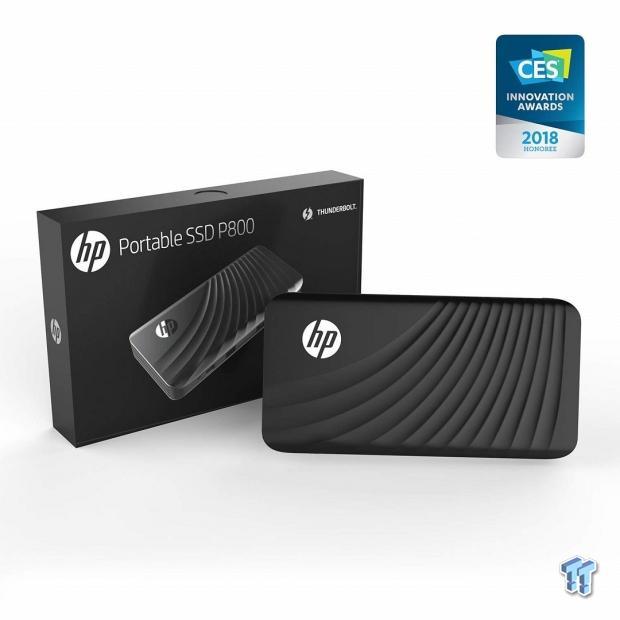 Thunderbolt 3, not every PC has it, not everyone needs or even wants it. Most people don't even know what the hell it is. Apple users know, as do "creatives" and power users. Thunderbolt 3 is awesome when paired with the right components. It offers a 4x increase over USB 3.1 Gen 2 technology that regular computer users are compliant with. If you crave something more, the HP Portable SSD P800 is a product you should know more about.

This drive pairs Thunderbolt 3 with a high-speed NVMe SSD that gives users up to 2,400 MB/s of sequential performance. The drive isn't as small as some others but you don't have to worry about thermal throttling or burning yourself from handing the drive either.

HP Brought the P800 to market in three capacities that range from 256GB to 1TB. Internally, the series uses a HP NVMe SSD that gives users control of the entire capacity. Performance tops 2,400 MB/s read and 1,200 MB/s sequential writes. HP is one of the few companies to list random performance with this series. Random performance comes in at a blistering 290,000 IOPS read and 190,000 IOPS write.

HP turned it up to 11 with the P800 but it also used the two storage technologies that do the same with pricing, Thunderbolt and NVMe.

The Portable P800 1TB sells at Newegg and Amazon for $449.99. It's a number that gives regular consumer sticker shock but is well within reason for professional users that rely on high-speed technologies to enhance their income. The 512GB model comes to a more affordable $279.99 and that drops to just $188.98 for the 256GB model.

HP backs the series with a 3-year warranty. The company doesn't advertise any endurance limits. 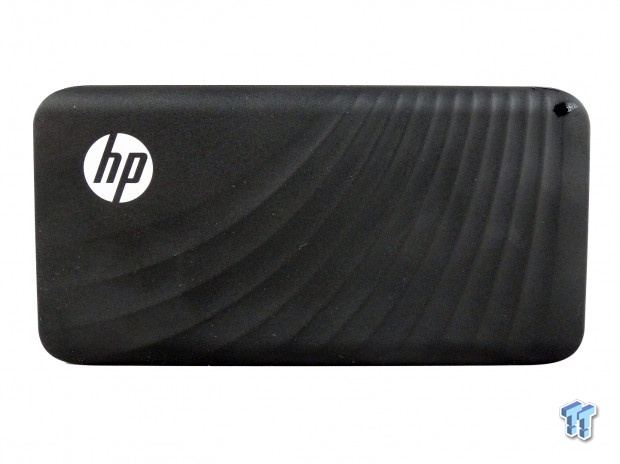 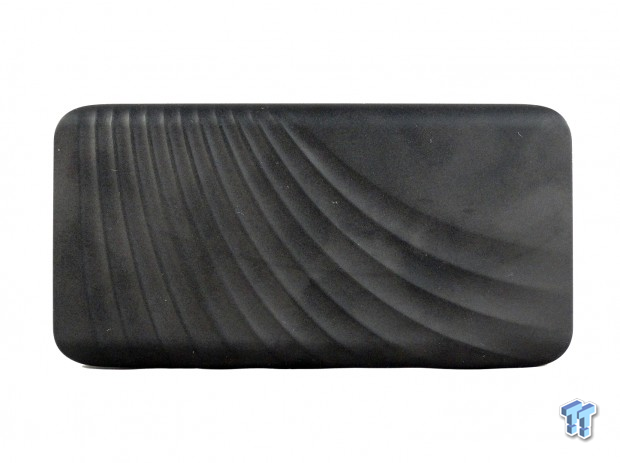 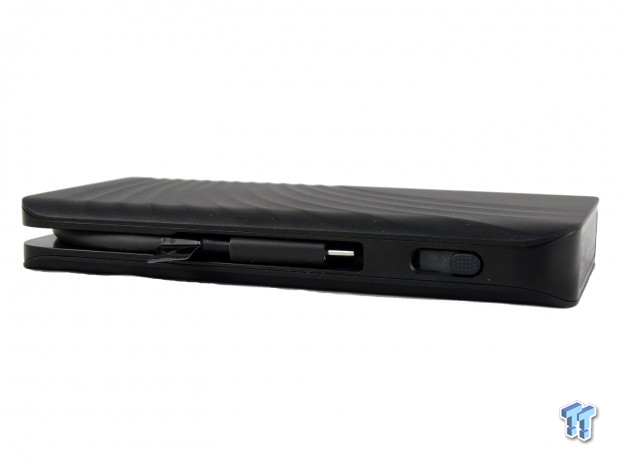 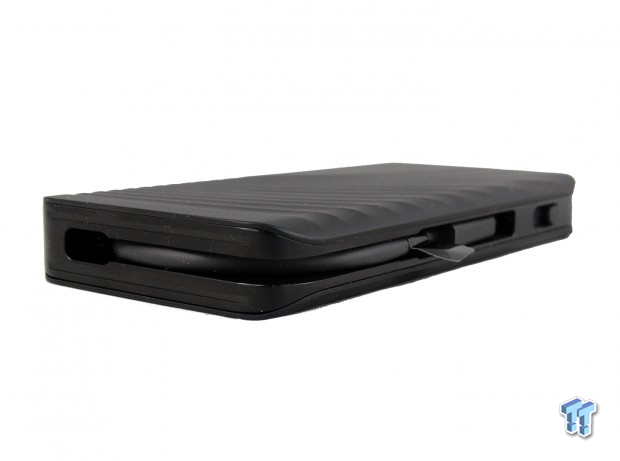 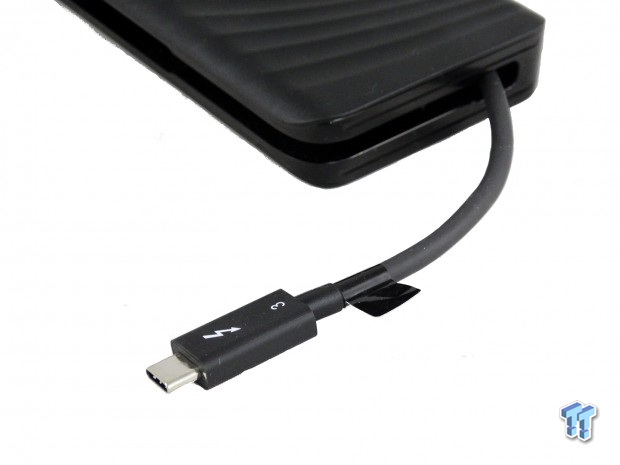 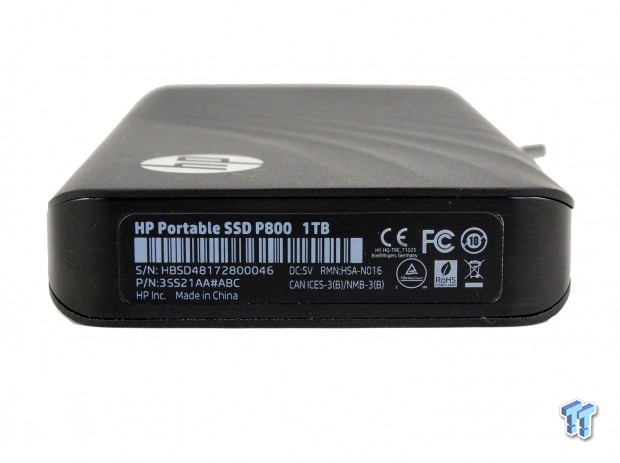 The P800 uses a fixed cable for connectivity. The attachment connector is Type-C, the standard for Thunderbolt 3. Electrically, the Type-C will not operate in USB mode. The connector tucks into a cutout on the housing. A small lever pushes the connector away from the housing so you can extend the cable away from the recessed storage groove. 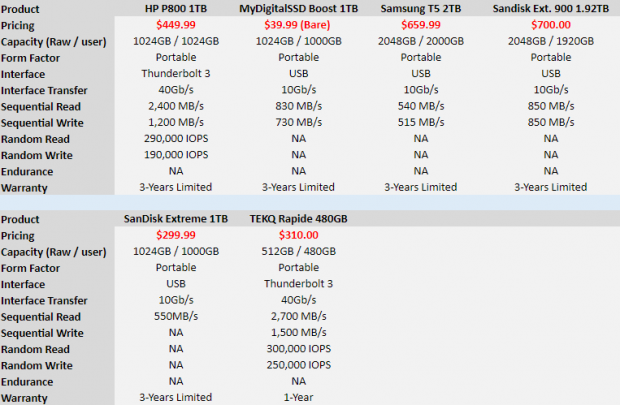 We pulled our fastest portable and external flash SSDs to compare to the HP P800.

The MyDigitalSSD Boost only sells as a bare enclosure now but at one time you could purchase it loaded with two Samsung 512GB OEM mSATA SSDs preinstalled. The Samsung Portable SSD T5 is one of the most popular drives in this category today. The SanDisk Extreme Portable 900 is the USB 3.1 Gen 2 version of the HP P800. It uses a large housing like the P800 but instead of NVMe, it uses two SATA SSDs to deliver high transfer speeds.

The new SanDisk Extreme rolls the advanced technology back to SATA, but decreases the overall size by using a smaller internal drive.

The TEKQ Rapide is the only other Thunderbolt 3 portable SSD in this review. It also uses an internal NVMe SSD to reach very high transfer rates. On paper, the Rapide is faster than the P800 but our numbers show more balance between the two than the specifications lead us to believe. 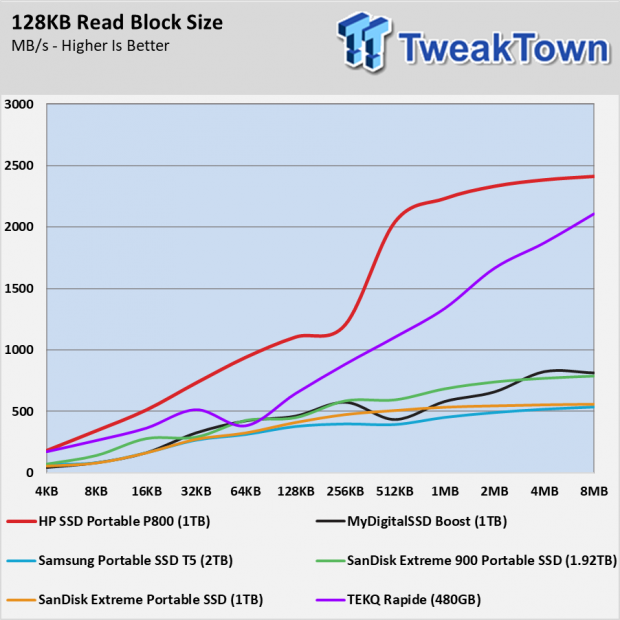 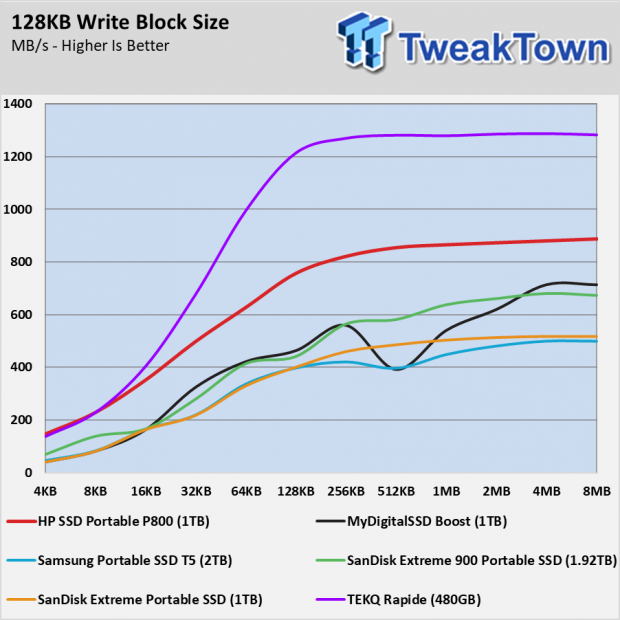 The HP P800 is faster reading data than the TEKQ Rapide. The number most people should care about is 128KB, the standard large block used by the Windows file systems.

The tables turn writing data. The Rapide is faster when you move data to the portable drives. Both drives show nearly peak performance at the 128KB block size. Thunderbolt 3 allows the NVMe drives to move a lot of data in a short time. 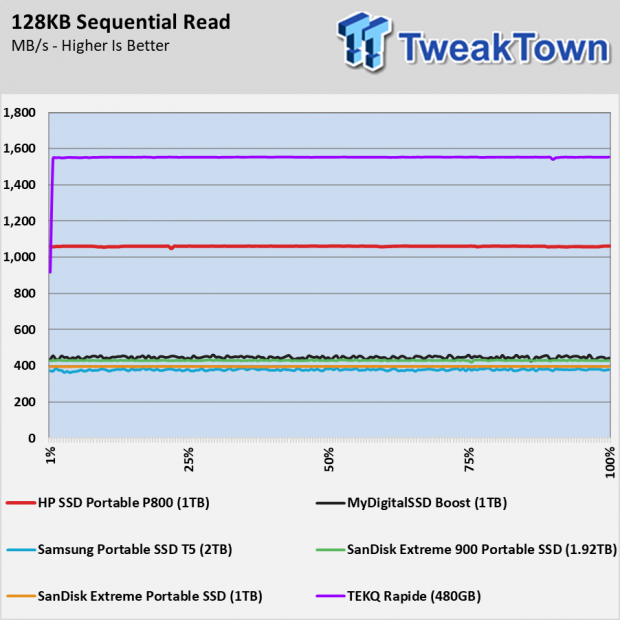 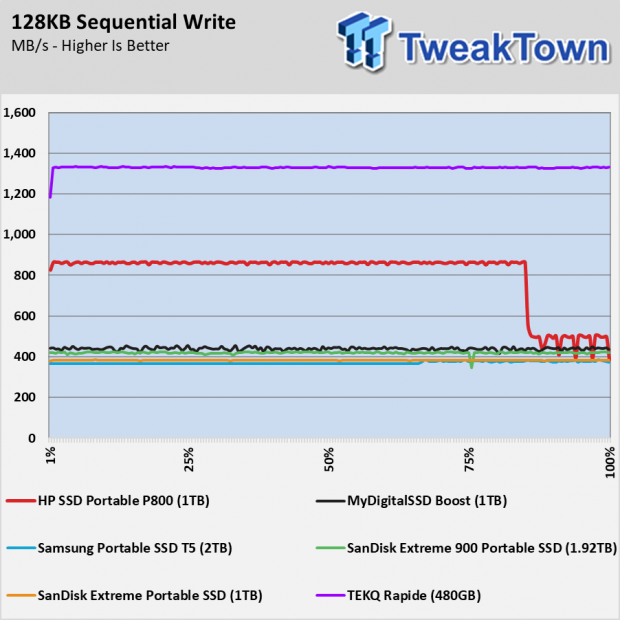 The 128KB sequential tests show a single large block file, like a movie, transfers to and from the drives. This is where the MLC flash in the Rapide comes to life and the 3D TLC in the P800 could use a little help. When you move several files at the same time, you increase the queue depths.

With NVMe SSDs the performance ceiling is much higher than the limits of a single transfer. The P800, as we saw in the block size test, is capable of achieving the same and even better performance than the Rapide in some real-world use cases. This is just not one of them. 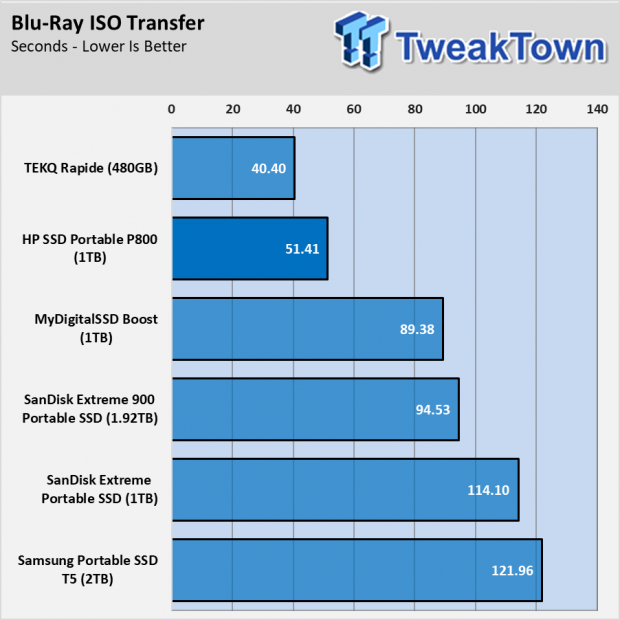 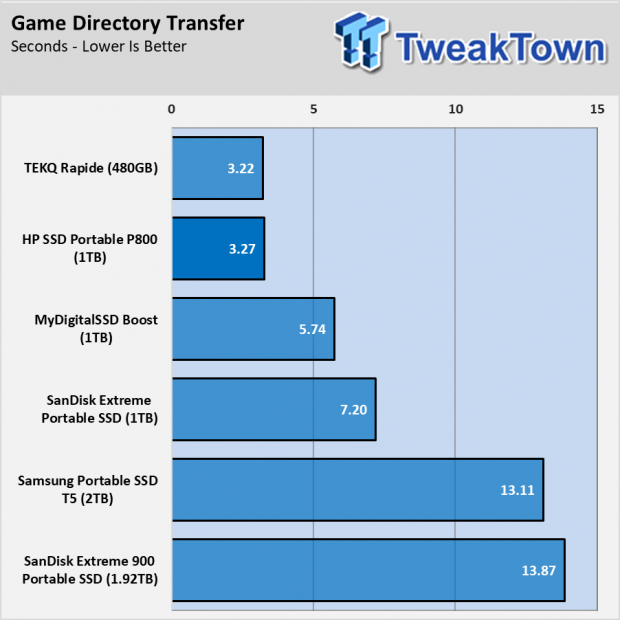 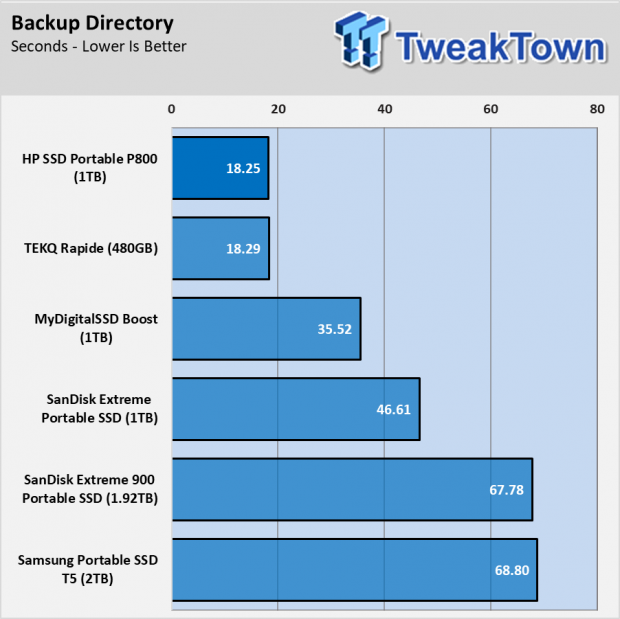 In real-world use, the two Thunderbolt 3 drives deliver nearly identical performance with each taking a win. The type of data really matters when transferring to the drives. The important takeaway from these tests is just how much faster the Thunderbolt 3 drives over the USB-connected models.

For professional users, Thunderbolt has been a game-changing technology. It came to market well before most of us muttered 10-gigabit Ethernet. At the time, most large external storage systems used expensive and complicated fiber channel technology. Over the years, the single cable technology moved closer to the consumer space with products like the LaCie Big series and eventually to single drive portable products like the one we tested today.

Modern products have stalled in the professional product sphere for the most part. It's not a problem with the drives, but more of an ecosystem issue. Apple has adapted Thunderbolt 3 but the famous "Apple Tax" keeps many people away from the products. On the PC side, we see Thunderbolt technology shipping on more systems and motherboards. Most of those products hover at the upper tier of the market. Intel has dropped the licensing fees for chipmakers to build lower-cost controllers. Until Intel spurs motherboard makers to make Thunderbolt 3 a standard feature, it will remain a costly add-on that most users will not spend more to use it.

Professional users on the other hand have lower cost devices thanks to the emerging ecosystem that has gained market share over the last three years. Thunderbolt 3 with commodity Type-C cables has certainly helped. NVMe-based drives that just started coming to market in the last fifteen months also helped to lower prices by removing expensive RAID controllers and a second drive in an array to achieve performance targets.

The HP P800 Portable SSD costs more than what most users will spend on a portable storage device. The model we tested today sells for $449.99 but it gives you back the only resource in the world that is nonrenewable, time. At CES in January, we saw a number of companies with products similar to the P800. The HP drive was one of the few that looked retail ready and it's one of the very few shipping today. It costs less than the Rapide, but also ships in a massive 1TB size that TEKQ doesn't offer. The construction is not as robust, but the aluminum alloy is strong enough to absorb any reasonable rough handling or fall.

Overall, we really like the HP P800 Portable SSD but are more excited about future generations when increased market share will lower prices across the board.