Since NVMe SSDs came to market, we've largely ignored M.2 SATA products. At one time, these were the hot new form factor responsible for enabling slim PCs and millions of devices support the form factor. M.2 SATA SSDs generally costs less than NVMe models and work in most of the same notebooks and desktops including the system you just built.

The technology media wasn't the only group to ignore M.2 SATA SSDs. Since 2017, the number of new devices in this form factor has dwindled. At the height of M.2 SATA, nearly every new SSD announcement included details for both 2.5", mSATA, and M.2. The only fab company to release a new mSATA SSD in recent memory was Samsung. M.2 should outlive mSATA since it shares the same interface with NVMe on the M.2 standard but the options will continue to thin.

Currently, there are two M.2 SATA SSDs that standout from the rest. The Samsung 860 EVO M.2 and the Crucial MX500 M.2 show superior performance to other products on the market today. The Western Digital Blue 3D NAND M.2 is also a contender with high performance and a low price; at the moment we just don't have one on hand to test. 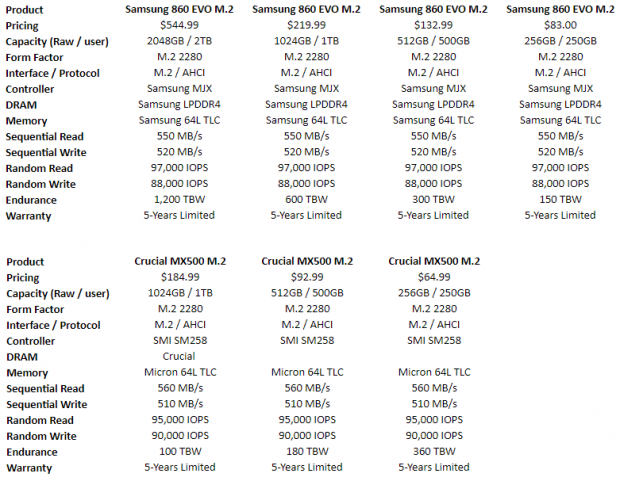 With two products in our review today we'll start to separate some of the comments.

Samsung released the 860 EVO M.2 series in four capacities ranging from 250GB to 2TB. The series introduced the new MJX controller and updated LPDDR4 DRAM to Samsung's SSD lineup. Both go relatively unnoticed next to Samsung's new 64-layer flash memory that brings industry-leading endurance to consumer-facing SSDs. The performance is consistent across the 860 EVO M.2 series. The sequential reads peak at 560 MB/s and sequential writes are not far behind at 520 MB/s. Random performance comes to 97,000 IOPS read and 88,000 IOPS write.

The Crucial MX500 M.2 came to market in three sizes ranging from 250GB to 1TB. The MX500 series, along with the Western Digital Blue 3D, are the only competitive SSDs to Samsung's 850 and 860 EVO products.

Both the MX500 and 860 EVO share features that stand out from most other SATA SSDs shipping today. The drives support user encryption with both IEEE 1667 (Microsoft's eDrive) and TCG Opal. Both also include access to clone software, a software management suite and a DRAM cache feature to increase performance and longevity. 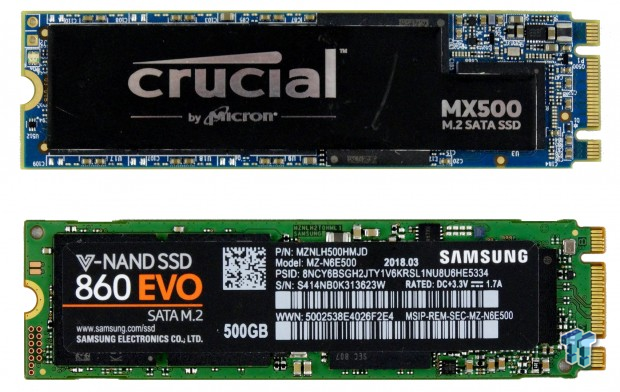 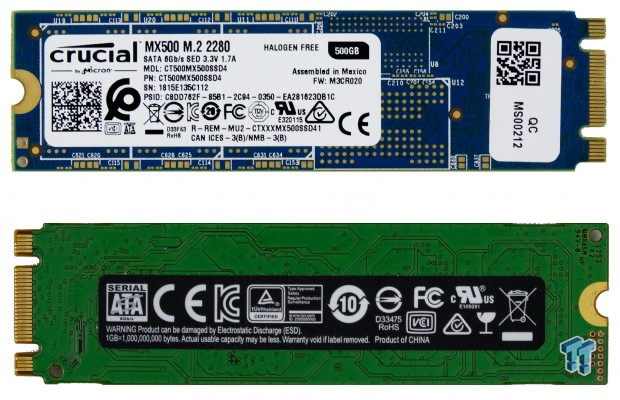 There is really not much to look at between the two drives. Most stay hidden in a notebook or in an M.2 slot with a video card covering them.

We kept the charts light today to focus on the two new drives. We did include two older M.2 SATA SSDs still sold today. The MyDigtialSSD BP5e M.2 uses a Phison S10 controller with Toshiba 15nm TLC memory. This drive represents a similar configuration to several OEM-focused SSDs shipping in notebooks sold in 2016 and 2017. The SanDisk X400 M.2 is an actual SSD that currently ships in notebooks and desktops from large system builders. The X400 M.2 is the only 1TB drive in this article. 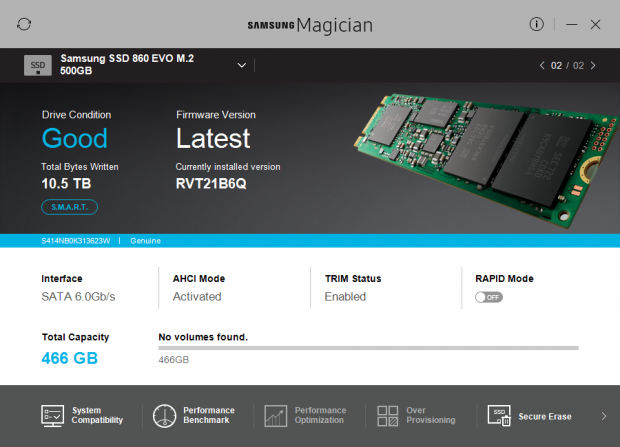 There are some fine details to consider with this form factor. Heat can become an issue without proper airflow. The circuit board is smaller than a standard 2.5" SSD. The SATA drives don't suffer from thermal throttling as much as the NVMe drives that are capable of reading and writing four to six times faster than the products we're testing today. You should still be mindful of placement.

Not all motherboards will allow you to use every M.2 slot for SATA. We use Z270 series boards from Asrock to test SSDs and the slot between the CPU and first PCI Express slot is PCIe-based storage only. We tried a M.2 SATA drive in the system and the initial screen noted an error and refused to boot further. We had to configure one of the M.2 slots at the bottom of the board to M.2 SATA in the BIOS. 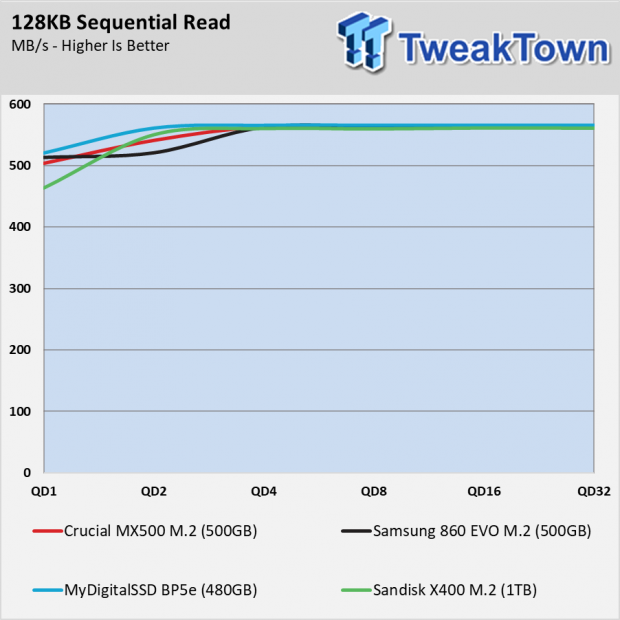 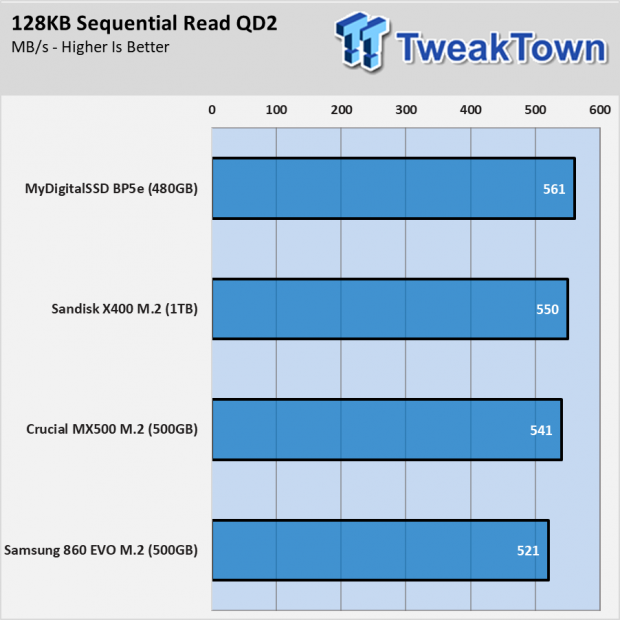 All of the drives exhibit very high sequential read performance. Most variation between products comes at lower queue depths, but that is where most consumer workloads fall. This test is the equivalent of reading a large block size file from the drives, like a movie. The queue depth (QD) is now many files you read at one time. A QD2 test is the same as reading two movies back from the drive, or transferring them from one drive to another. 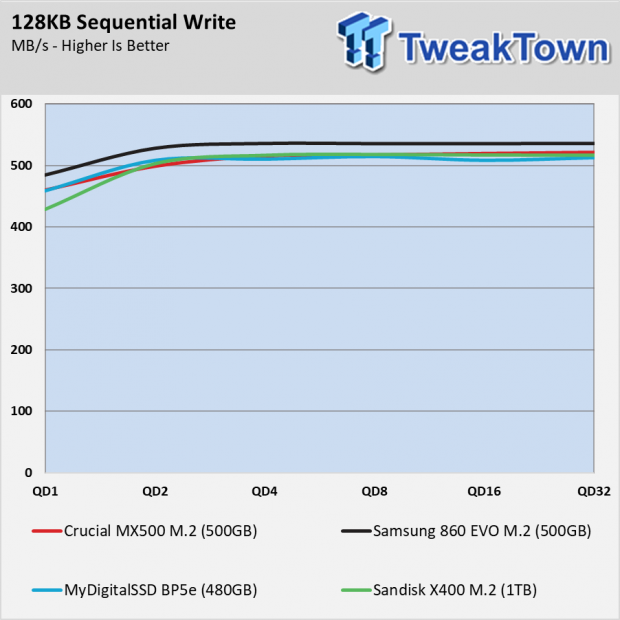 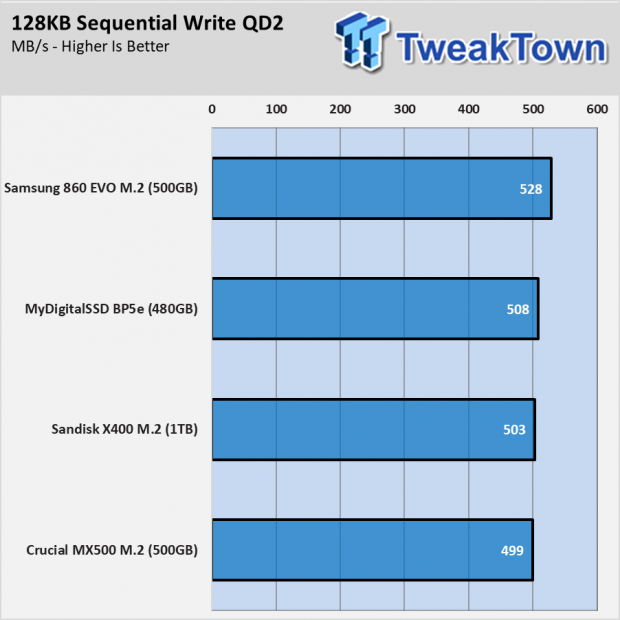 The sequential write test is the same but in the reverse order. In this test, we write large block size data to the drives. This is where Samsung has historically dominated during the 3-bit per cell (TLC) era. Micron closed the gap to Samsung's write performance with 64-layer flash and not long after Toshiba/SanDisk released 64-layer memory to do the same.

In our burst test, the drives are all fairly equal as the SLC buffer does a very good job on each of these products to keep performance high for a short period of time. 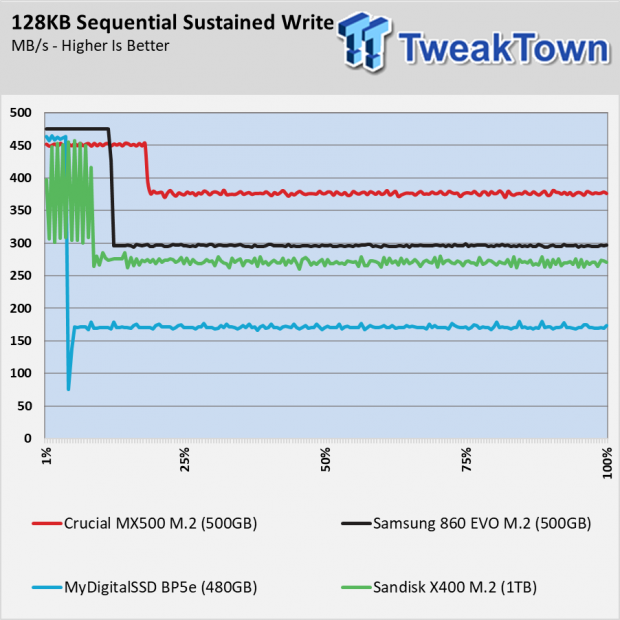 The MX500's SLC buffer is not as fast as the 860 EVO's but it does stay at a higher speed tier for longer. Post SLC buffer the MX500 delivers a higher native TLC write speed, around 375 MB/s for the 500GB drive. The 860 EVO 500GB writes large block size sequential data at 300 MB/s after the initial SLC buffer fills.

For reference, the other two drives use older 2D TLC memory and have a lower sustained write speed after the initial SLC hit. There are many advantages to using 3D memory. For people that transfer large volumes of data this can be the most significant. 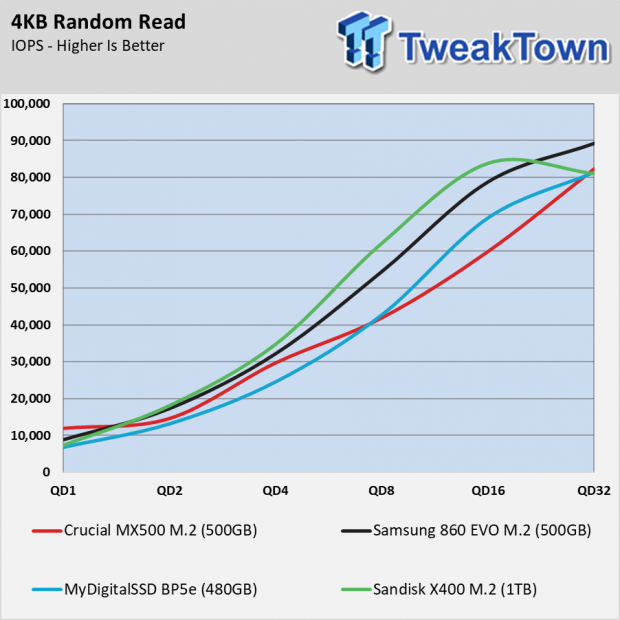 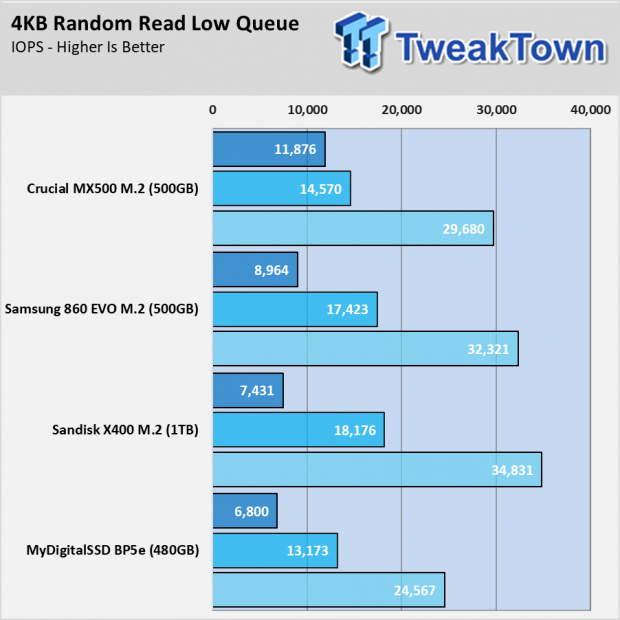 We talked about Micron catching up to Samsung's VNAND but in some areas, the Micron 64-layer memory is superior. The MX500 and some NVMe SSDs like the Adata SX8200 with Micron flash technology outperform Samsung's SSD in random read performance.

This is where the user experience comes from, what makes your computer "feel" fast. Samsung's 860 series took a small step backwards in QD1 random read performance compared to the previous generation, 850 EVO.

The MX500 has a strong advantage here and it's one of the reasons why we like this product series so much. 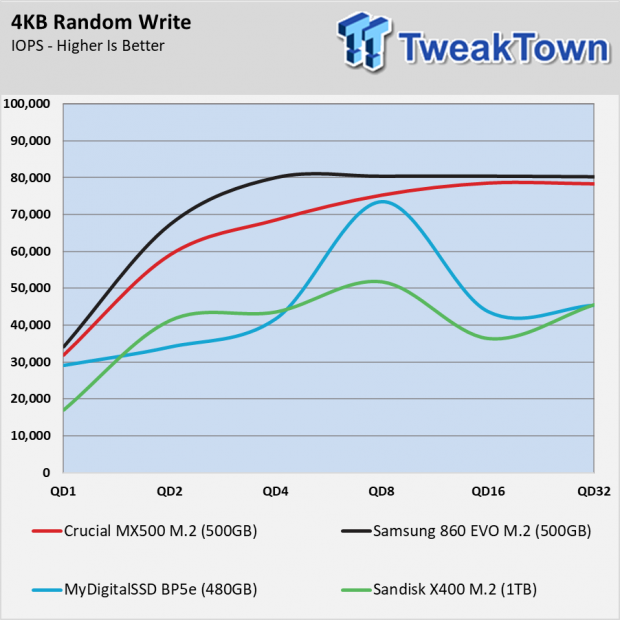 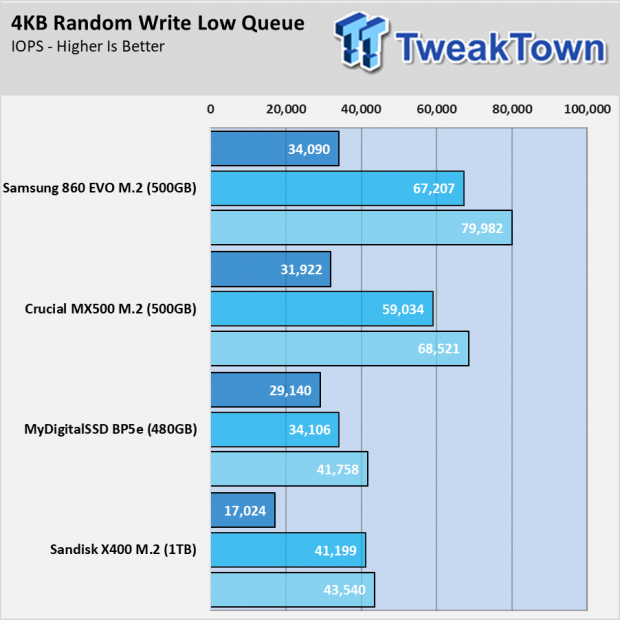 Micron flash doesn't win every test through. This review will show the MX500 and 860 EVO going back and forth depending on the workload. Samsung's TurboWrite, the fancy name for the SLC buffer technology, is a fixed size that writes random data faster. Crucial's Data Write Acceleration (DWA), the brands fancy name for the SLC buffer technology, is dynamic. It will change the amount of high-speed area depending on the amount of data already on the drive, and the working workload at the time. Both technologies are very good and superior to what we see from most companies today. In the performance charts, the Samsung shows an advantage but under real-world use, there is very little difference at the keyboard. 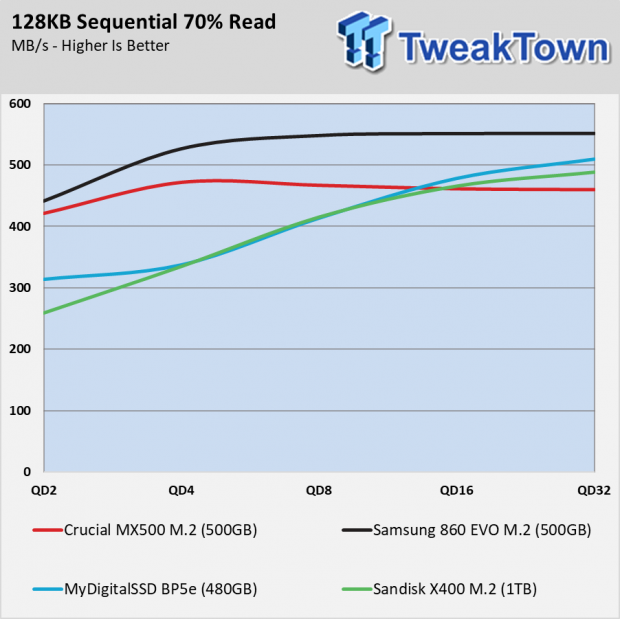 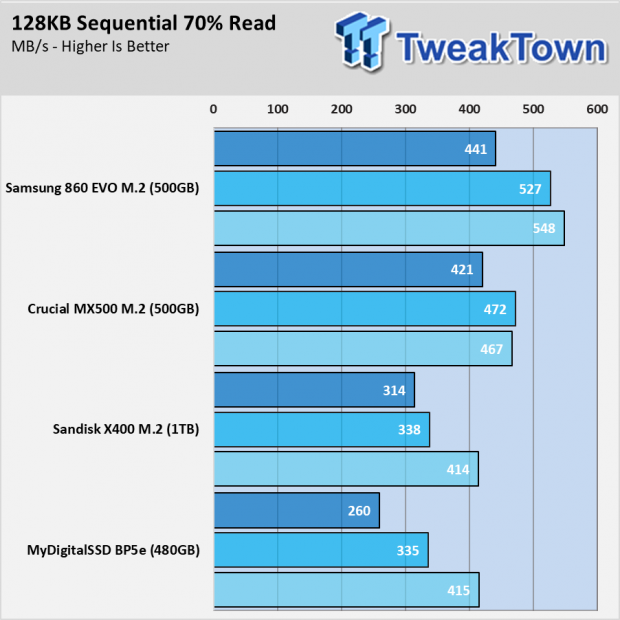 We start to see some division in performance under mixed workloads. With sequential mixed data, the Samsung outpaces the Crucial with a gap you may notice transferring large amounts of data in your system or over a high-speed network. 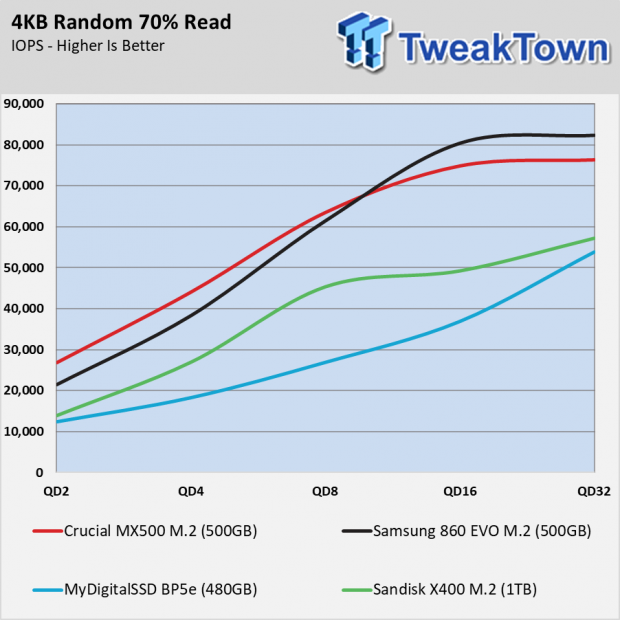 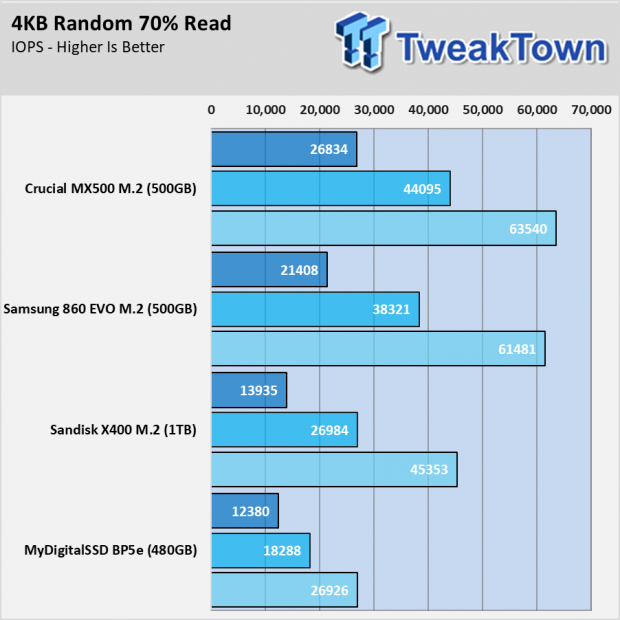 In the same vein, the Crucial delivers better random mixed workload performance thanks to the faster memory at low queue depths. The MX500 will feel faster under normal use. In two identical notebooks, we ran the MX500 and 860 EVO side-by-side during the SYSMark test. We were able to see the MX500 completing tasks faster, even booting and rebooting. The problem is that without a side-by-side comparison, you wouldn't see the improvements. Both drives feel very fast as the boot media for a PC. 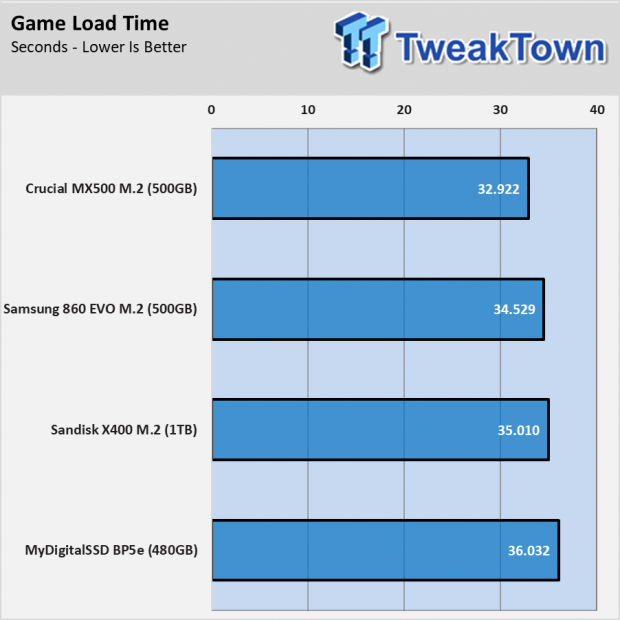 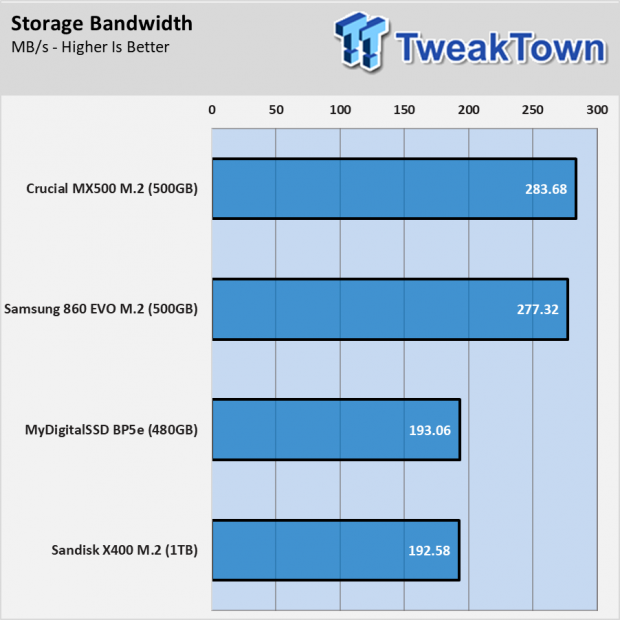 It's been a very long time since Samsung's flagship consumer SSD lost to another product in the PCMark 8 Storage Test. It's been even longer since Crucial sat at the top!

Both drives are close enough to call it a draw though. The performance increase over other companies previous generation products is significant. If you already use an older SSD, there is a reason to upgrade to newer flash technology that will increase the user experience. 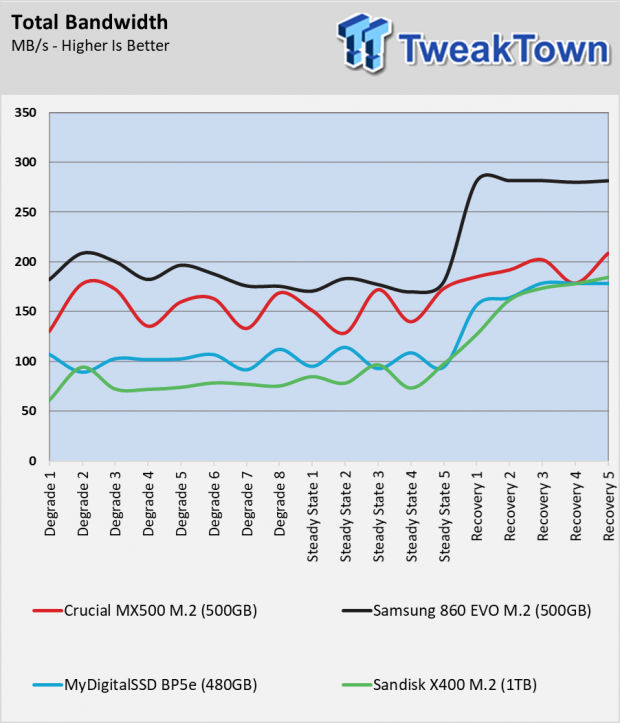 Neither drive's architecture was meant for true workstation use. Samsung's 860 Pro and 970 Pro NVMe product still dominate the workstation market for flash-based storage. 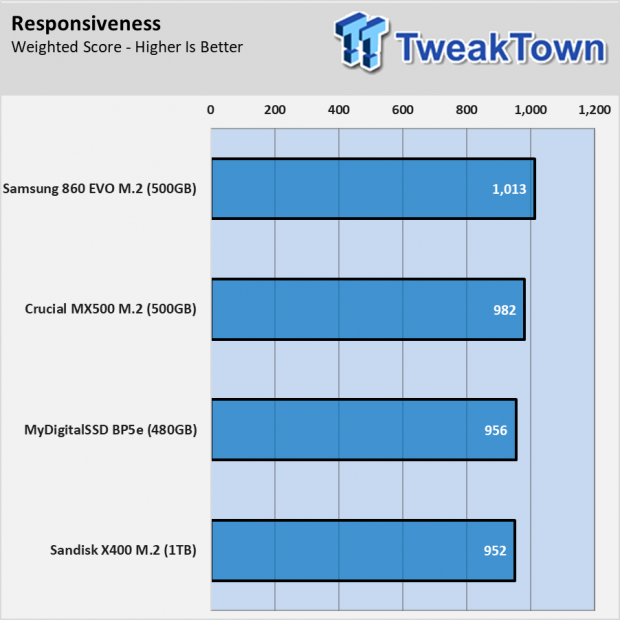 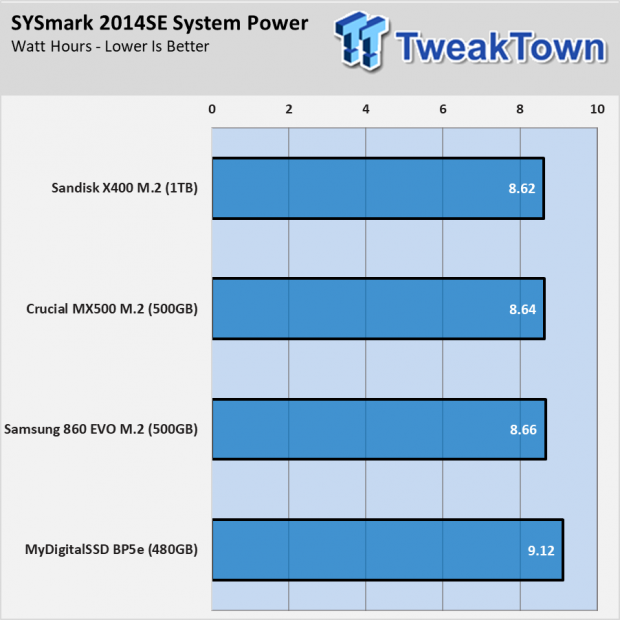 The MX500 is faster at the start of the SYSmark 2014 SE test but hours of office-work takes a toll. Overall, the 860 EVO delivers a more responsive user experience in the test, but it's not a clean victory. We will talk more about this on the next page. 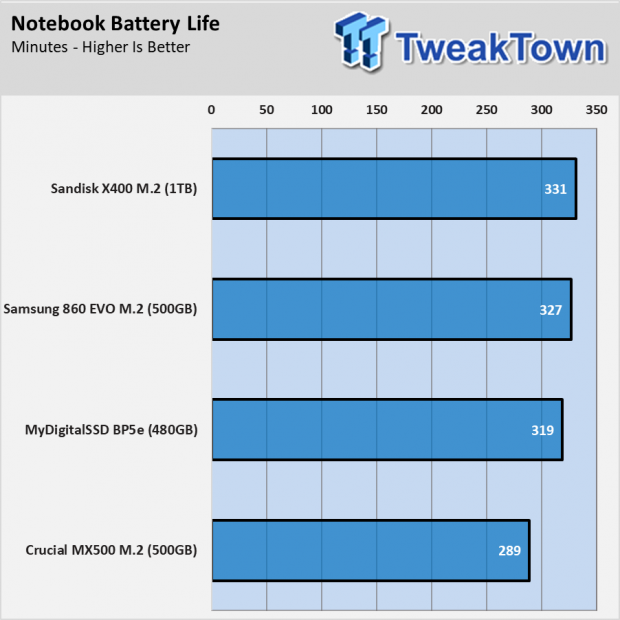 Between the two drives we're focused on today, the 860 EVO delivers longer notebook usability on a single battery charge. The difference in our Lenovo Y700-17 gaming notebook came to 4 minutes. In a system designed for long battery life, the gap would increase.

There isn't a clear winner today because both the Crucial MX500 and Samsung 860 EVO are great SSDs. That doesn't mean you can't leverage one drives strengths over the other to choose a product best suited for your specific needs.

The $92.99 500GB MX500 has the highest random read performance of any SATA SSD we've ever tested. With your operating system loaded on the drive, your system feels brisk. Even coming from a four or five-year-old SSD, the MX500 gives you that first SSD performance all over again. The drive can get sluggish during and for a few minutes after you write a lot of data to the drive. This isn't a drive you want to run with most of the capacity full because the dynamic SLC buffer shrinks as you load the flash cells.

Crucial did a good job with the endurance of this series, but it's not the best available. If you write a lot of data to your SSD this is not your best option. In this capacity, you get 180 terabytes of data writes under warranty. It is a tremendous amount of data, but some of us do not have any issues downloading 180TB in just a couple of years.

The Samsung 860 EVO is not the company's workstation model, but it shares the same 5-core controller with the 860 Pro. The extra cores allow the EVO to deliver superior performance under intense workloads. The secret is dedicating cores to background activities and predictive algorithms. Under normal consumer workloads, the 860 EVO is nearly as fast as the MX500. You wouldn't be able to tell the difference in a back-to-back sitting, but there is a small difference with two systems sitting beside each other.

Samsung gets the nod for endurance. The 500GB 860 EVO gives users 300 terabytes of data writes under warranty. The series leads the industry in every capacity after you overlook the 860 Pro that doubles the endurance of the EVO series.

Both drives are amazing and represent the pinnacle of SATA SSD development. They may be the last of the breed. Pressure to make SSDs cheaper, emergence of QLC, and the performance ceiling of SATA III will all weigh heavily on next-generation products. Moving forward the high-performance products will move to NVMe and SATA will move to cold storage for enthusiasts. M.2 SATA SSDs are simply a transition product between the two eras.