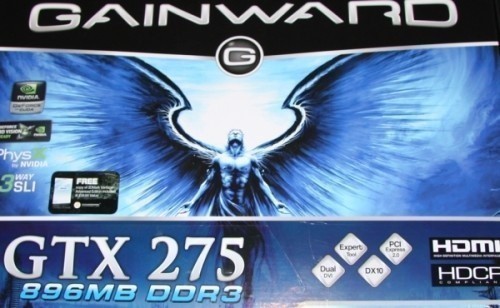 Recently we looked at how the new HD 4890 from ATI went in the overclocking department. Today we take a closer look at how NVIDIA go with the new GTX 275 which has just been recently released to compete against the new ATI offering.

While overclocking on NVIDIA cards is slightly more involved due to the fact that the drivers don't have any embedded overclocking software (unlike ATI with its Overdrive functionality), NVIDIA's cards do only require the installation of a small program called RivaTuner to get around this.

With RivaTuner installed and plenty of spare time, we went on our merry way to increasing the memory and core clock to a point which gave us a nice increase in performance, whilst still being completely stable at the same time.

How far up did we move from the stock 733MHz core and 2268MHz DDR memory clock? - Jump forward a single page and you will find out. From there we will get stuck straight into the benchmarks and see what kind of performance increase these new clocks give us.


Utilizing RivaTuner we took the time to increase the GPU, Shader and Memory clock. Bumping the card up 10MHz - 15MHz at a time and running a loop of 3DMark Vantage in between lets us find a sweet spot for clocks.

Based on a GTX 200 series product we have a shader clock unlike the HD 4890; in this case we chose to keep it linked (an option under RivaTuner) with the core, meaning both increased together.

These increases should give us a nice little increase in performance. To find out just how much, though, we're going to run through a number of our benchmarks today. So let's get stuck into it and find out what exactly is going on here.

Straight away we see a good increase in both the P and X settings under 3DMark Vantage. Hopefully we see these healthy increases translate to real world games as well.

While there's a fair bit of movement in the averages, in the more important minimum department we don't see the best gains till 2560 x 1600. The 5 FPS increase, however, translates to an increase of almost 20%.

With CINEBENCH not making use of the overclock, we see a bit of score fluctuation being the only difference between the two cards.

Like PT Boats we see some nice movement in the averages. The minimum department is a bit of a weird one; 1920 x 1200 sees a massive boost while 1680 sees nothing and 2560 sees only a slight increase.

Across the board we see gains in Warhead. What we really see here, however, is the stock clocks sitting just behind that 30 FPS we want to see, while the overclocked card jumps a huge 20% beyond that minimum. This is the difference of nice smooth game play and a bit of choppiness.

We continue to see good gains at all resolutions, especially in the average department. In the minimum department we see gains range from 5% to 10%.

While still offering pretty poor performance, we do see the heavily favored ATI game get a nice little boost in performance thanks to the extra MHz on offer.

Like we've seen all along, we have some good gains here thanks to the extra MHz on offer.

Not quite enough to get that 30 FPS minimum, but a nice step in the right direction. Dropping to 4x AA should solve the problem, though.

Again, a nice little boost and like we saw in Warhead the difference is smooth game play from a bit of choppiness with the overclocked offering getting us past that 30 FPS minimum.

Finally we leave with L4D and like we've seen all along, a nice boost in performance with the overclock is what we have here.

Like the HD 4890, we see a good boost in performance thanks to the overclock we've achieved here. While we know that companies out there won't push the cards this high, we should see some companies who like to live on the edge give us a core of around 700MHz and a memory clock around 2400MHz DDR.

Over the next few weeks it's going to be interesting to see what both sides do when it comes to overclocked models. No doubt ATI will be able to close the gap between the HD 4890 and GTX 275 with some overclocked models, but at the same time we don't doubt that NVIDIA aren't going to sit back and not try to extend the lead they have by pushing their clock speeds north.

At the end of it all, we can see that the GTX 275 offers some good potential when it comes to overclocking. While the task might take slightly longer than ATI offerings due to 3rd party software needing to be installed, it really is nothing for the results that can be obtained in doing so.

The one thing to remember, though, is just because we achieved these clocks today it doesn't mean you will; some cards might not go as high, while others might choose to go even higher.

Like the HD 4890, the GTX 275 extends the value the card offers by giving us a decent overclock. The best thing about this is that in a few of our tests we saw that the overclock helped make the difference between the game running silky smooth by passing that 30 FPS barrier and not.

Overall, a great card that shows serious overclocking potential. If you want to save some dollars and get some extra performance, buy a stock clocked model and overclock yourself. A card like the Gainward we used today is a particularly great option thanks to the aftermarket cooling on tap.