We chucked our new Tweakipedia build under the bus a few weeks ago, seeing how it would fare with two NVIDIA GeForce GTX 780s in SLI at 7860x1440. That resolution is quite strenuous on any system, mixing three 2560x1440 panels and the latest games with two of the fastest GPUs is always fun.

Well, NVIDIA were kind enough to throw two GeForce GTX 770s our way, so we're going to see how these much, much cheaper GPUs do at the same resolution through the same benchmarks.

We'd like to thank Corsair, NVIDIA, GIGABYTE, AMD, Patriot Memory, and InWin for making this all happen - without you, we couldn't have done it. 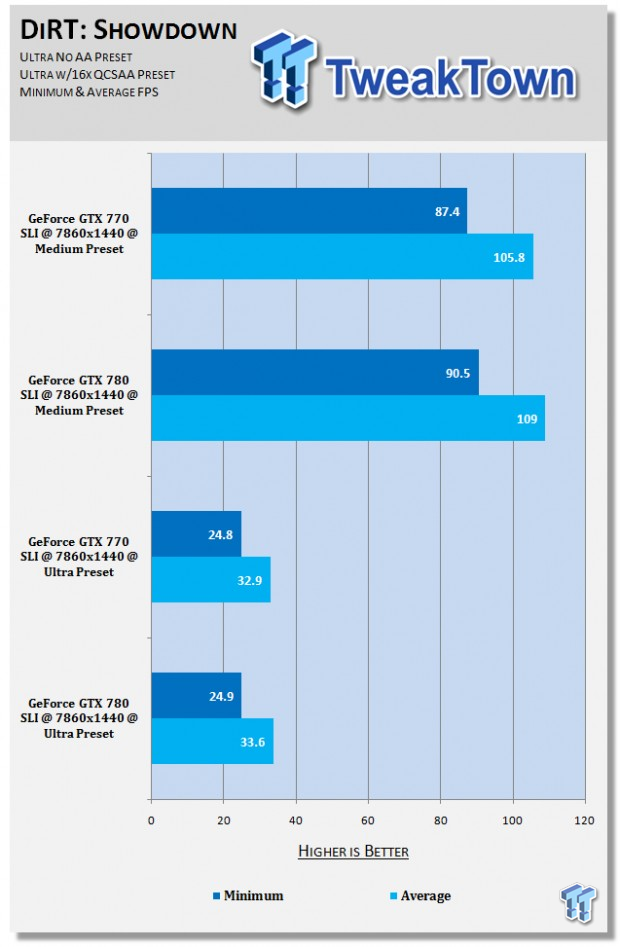 Starting with DiRT Showdown, the GeForce GTX 770 performs close to its bigger, more expensive brother. Beginning with the Medium Preset, we see an amazing 87.4FPS minimum framerate, which is exactly where we want to see it. The average FPS sits at a tidy 105.8FPS, which is nothing short of amazing for these two cheaper GPUs.

Cranking things up to the next level and moving onto the Ultra Preset, we see the frame rate drop heavily, but nothing we haven't already seen on the GTX 780 GPUs. The minimum FPS drops to 24.8FPS and the average sits at 32.9FPS which is still OK to play with. 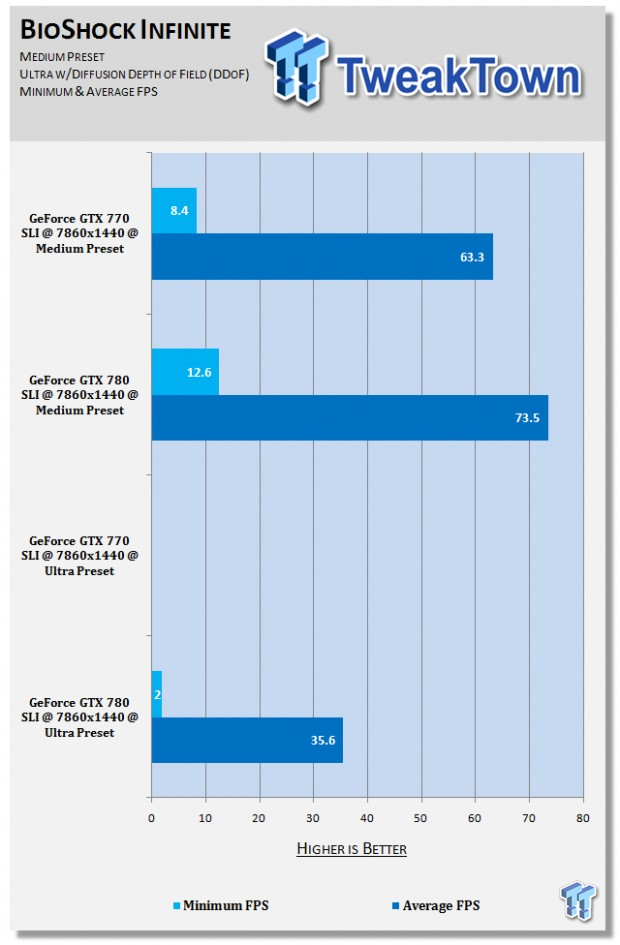 Our second game on the benchmarking chopping block is BioShock Infinite, which saw some very, very mixed and very disappointing results. First off, we have the Medium Preset which saw a minimum of 8.4FPS and an average of 63.3FPS. The average is absolutely fine, something that is quite playable for sure.

Moving into the Ultra Preset, which saw frame rates in the single digits and then BioShock Infinite completely locked up. I thought it was a once off, but this repeated twice more for three times total not being able to complete the benchmark. 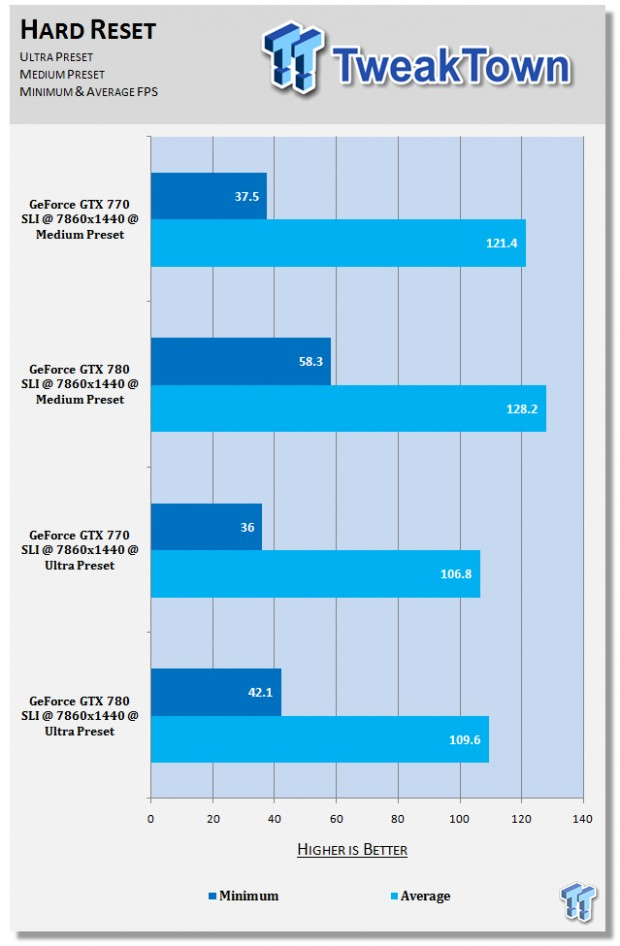 I've only been using Hard Reset for a few weeks now, but it is an impressive looking game which runs so well at 7860x1440. Starting with the Medium Preset, where we find out GTX 770 SLI setup spitting out a minimum of 37.5FPS and an average of a super-impressive 121.4FPS.

Increasing the detail to the Ultra Preset doesn't really change the numbers all that much, with a minimum of 36FPS and an average of 106.8FPS - something that is awesome to experience on a triple 1440p setup. 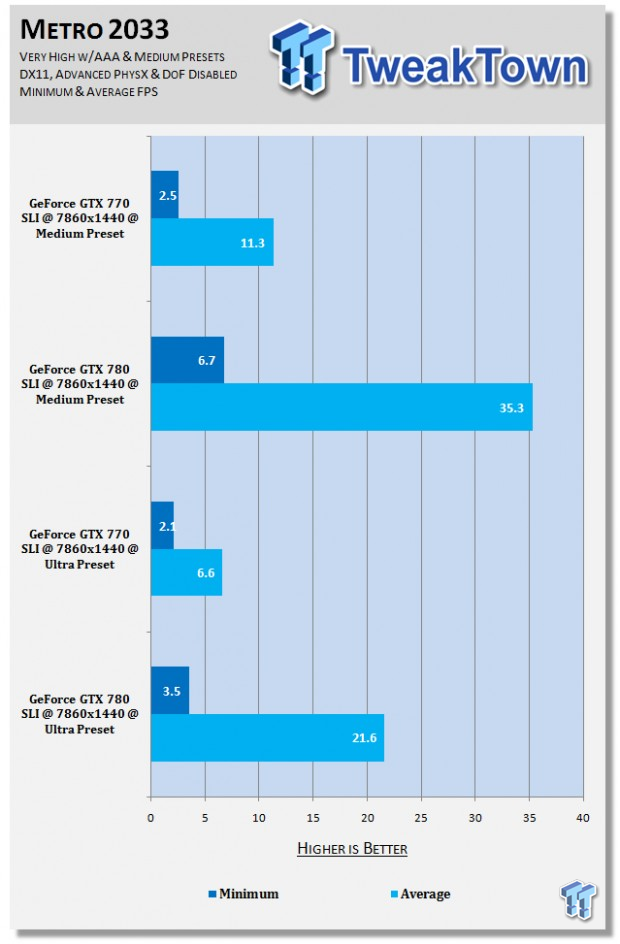 Oh, Metro 2033 - either you have problems, or you spit out some truly disastrous results with a high-end setup on multi-monitors. Our GTX 770 SLI setup could only manage a minimum of 2.5FPS, and an average of an unplayable 11.3FPS.

But that's not the worst bit: the Ultra Preset provided a mind-blowing 2.1FPS as a minimum, and an even worse 6.6FPS average. This is simply unplayable. 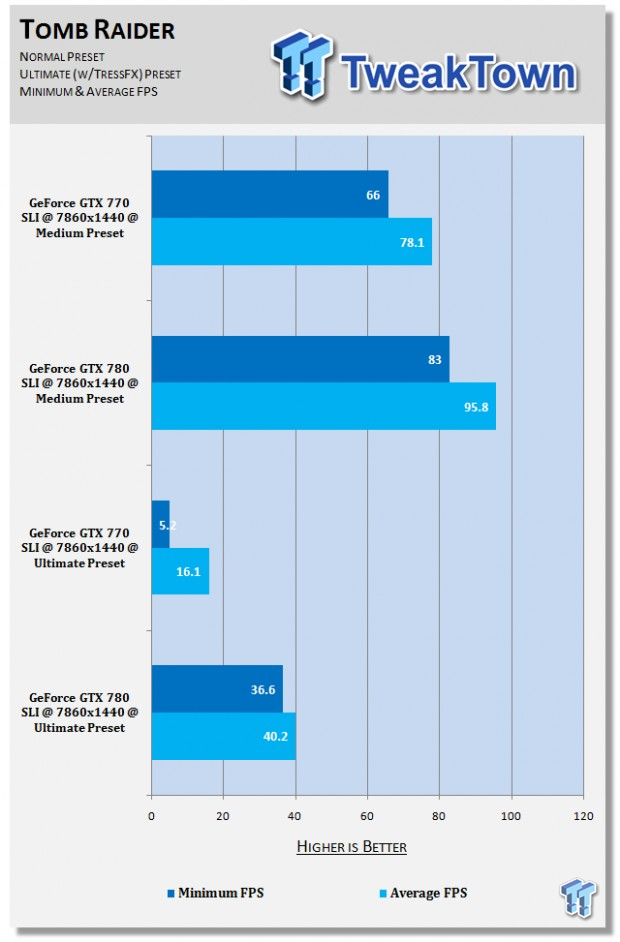 Tomb Raider was another game with some mixed results, where the GTX 770 SLI setup kept its pacing throughout the Medium Preset testing, providing a nice minimum frame rate of 66FPS and an average of 78.1FPS. Cranking things up to the Ultimate Preset with that stressful TressFX hair on the other hand, was an entire new ballgame.

We saw a drop to just 5.2FPS as a minimum frame rate, and a barely better 16.1FPS average. This is unplayable, so I would definitely recommend sitting on the Medium Preset, which still look gorgeous. 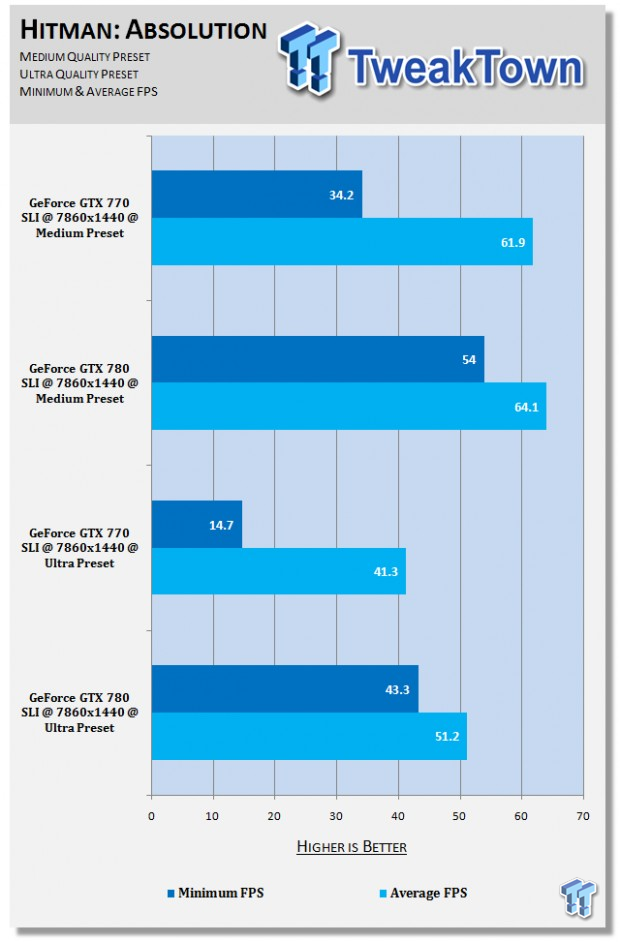 Hitman: Absolution was another strong fitting for the GTX 770 SLI setup, showing off with its Medium Preset results of a minimum of 34.2FPS and an average of 61.2FPS. When results spit out anything over 60FPS at 7860x1440, we stand here impressed.

The Ultra Preset netted some impressive results, but not so much in the minimum FPS department. Hitman: Absolution at 7860x1440 on our GTX 770s in SLI provided just 14.7FPS as a minimum frame rate, but picked up considerably with an average FPS of 41.3.

Before I started testing the two GeForce GTX 770 GPUs, I expected close to the same results that we saw with our GeForce GTX 780 SLI benchmarking at 7860x1440 and I wasn't disappointed, for most of the games.

Starting off, we have a huge price difference between the GTX 780 and GTX 770, with the former being $649 and the latter priced at a competitive $399. The GTX 770 is an impressive GPU for the price, and stands up against its bigger brother at the super-high resolution of 7860x1440.

But, let's face it: if you're going to spend the money buying three 1440p screens, you're going to want to enjoy them, right? Well, that would result in you grabbing the GTX 780s, or even the GTX Titan's.