This has been a long time coming, slowly getting the parts that we needed to get to this point, but we're here! We have our new system built, which you can check out in this post, and the video below.

The new system kicks all sorts of ass, thanks to some of our closest friends who sent over boxes of hardware to make this happen. We'd like to thank Corsair, NVIDIA, GIGABYTE, AMD, Patriot Memory, and InWin for making this all happen - without you, we couldn't have done it.

We're going to start off our new articles with the GeForce GTX 780s in SLI at 7860x1440 with stock clocks on everything. This means that our Core i7 4770K processor is at stock clocks, and so are the two GeForce GTX 780 GPUs. We'll continue to get articles out showing the difference between stock and overclocked GPUs, and then we'll see how an overclocked CPU can help a high-end, multi-monitor, multi-GPU setup. 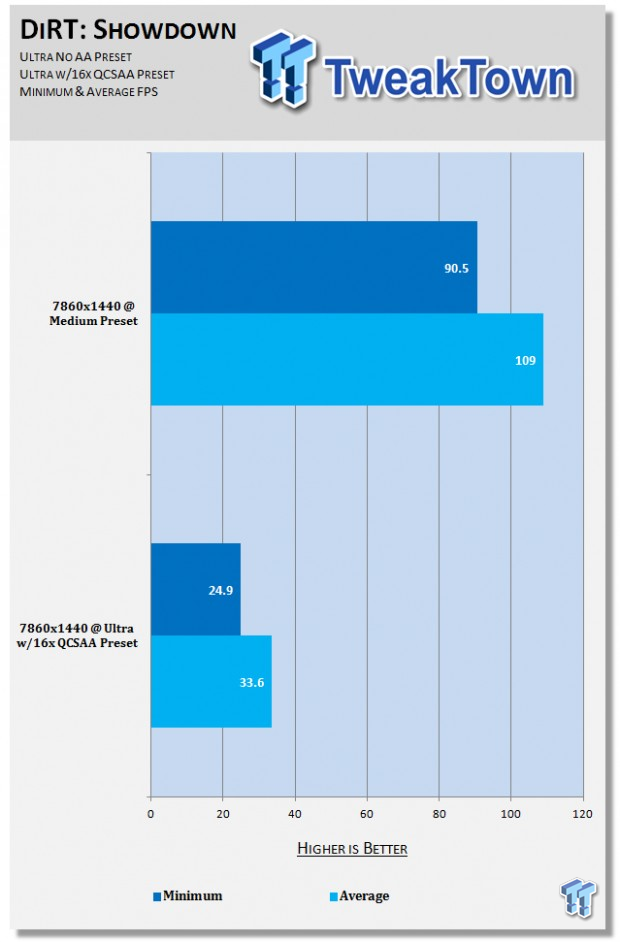 DiRT Showdown is one of our new games to be welcomed onto our rotation of benchmarks, with some incredible graphics being displayed, especially at 7860x1440.

At 7860x1440, DiRT Showdown on its Medium preset provided us with a minimum of 90.8FPS and an average of 108.1FPS. This is nothing short of incredible at such a massive resolution - something that really knocked me back for the first benchmark run.

Cranking it up to the Ultra setting, the graphical improvement is nice, but not worth the dip in performance. We see the minimum FPS taken down to just 29.7FPS, with an average of 40.1FPS. 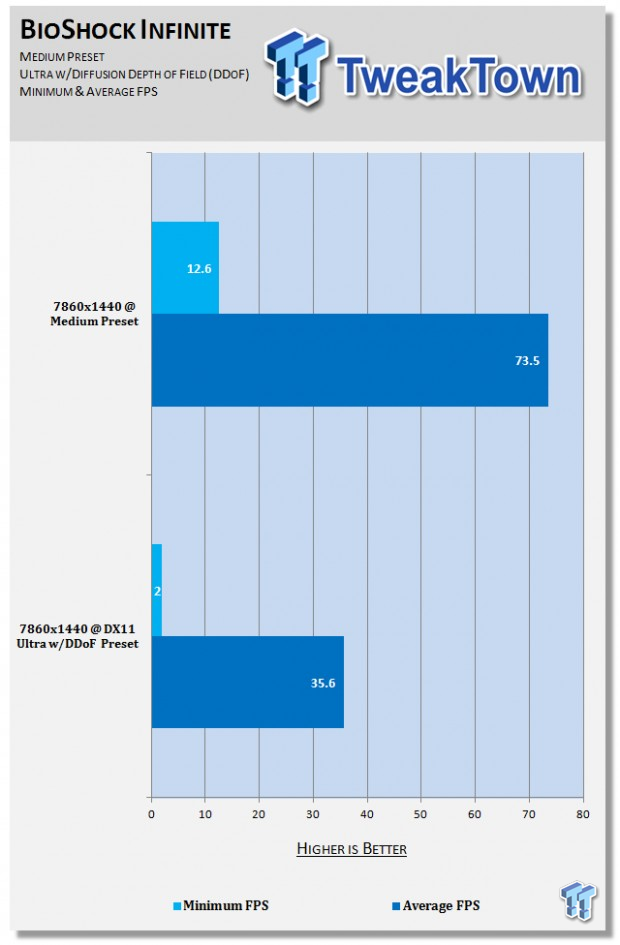 BioShock Infinite is a beautiful game, and that beauty only increases with the resolution. Our first run on the Medium preset saw some great results, with a minimum of 12.6FPS, but an average of a swish 73.5FPS. 7860x1440 at an average of 73FPS is a great result, and would provide a great playing experience.

The same can't be said for the DX11 w/DDoF preset, which dropped the minimum FPS to just 2FPS, spitting out an average of 35.6FPS. Anything above 30FPS is alright, but you really want to his 60FPS - especially on triple-monitor setups - to have a great experience.

BioShock: Infinite was great on our 7860x1440 testing, but the Medium preset is definitely what we would recommend using. The drop in detail wasn't that noticeable, but the improvement in the frame rate is instantly noticeable and provides a much better gaming experience. 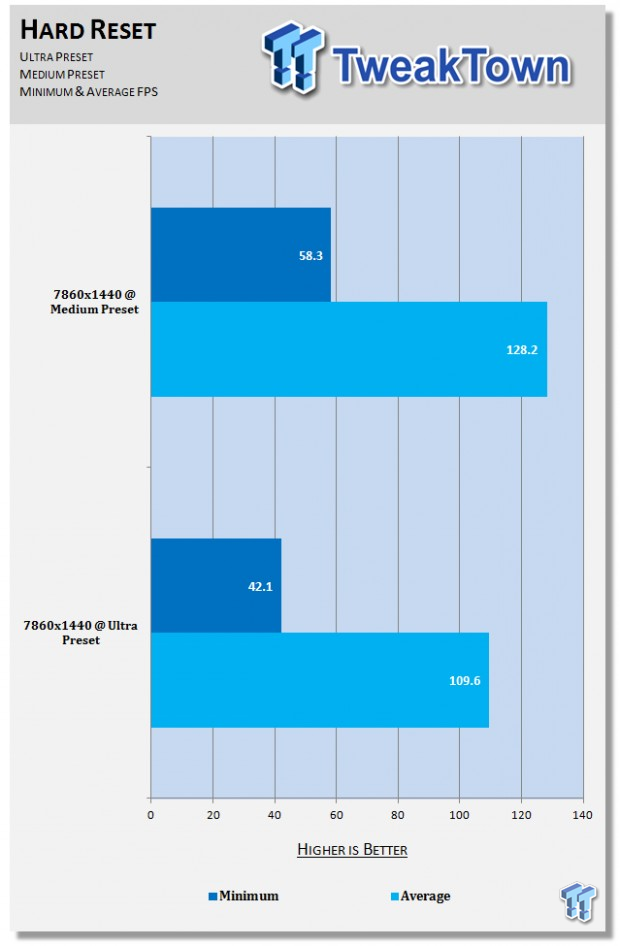 Hard Reset is our second new entry to our Tweakipedia benchmarking, as it is a game that is exclusive to the PC. Thanks to this, it runs incredibly well, even at the GPU crushing resolution of 7860x1440.

Sitting on its Medium preset, Hard Reset pumped out a minimum of 58.3FPS and an average of 128.2FPS - yes, 128.2FPS! This is absolutely stellar, and I would put this down to the game being optimized for PCs only, which can't be said for 90%+ of titles these days.

Hard Reset even performed amazingly on its Ultra preset thanks to our GTX 780 SLI setup, with a minimum of 42.1FPS and an average of 109.6FPS! This is a great result, as we see just a near 20% drop in performance, but at maximum quality! 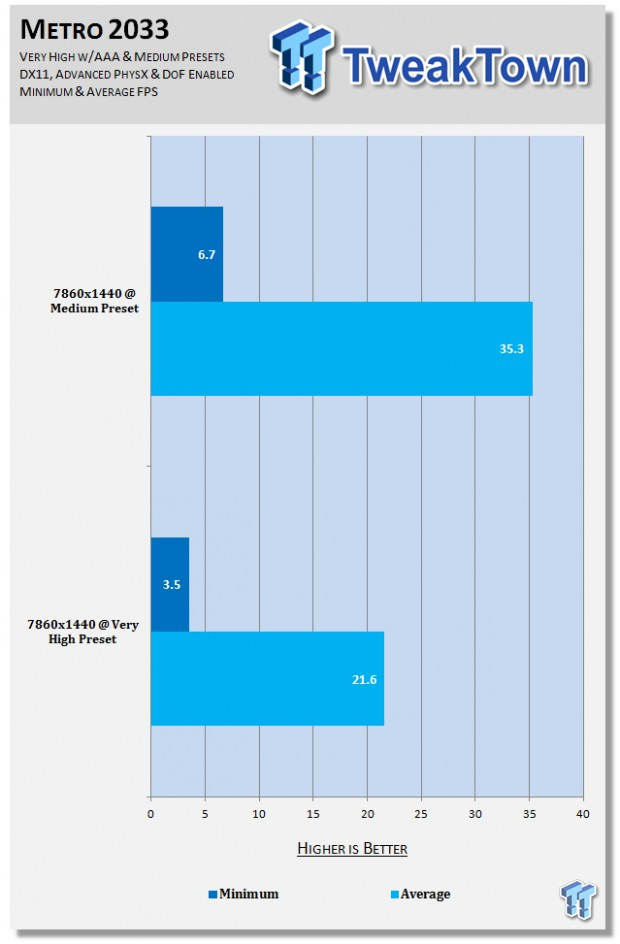 Metro 2033 had a few issues on our setup, but we got it working in the end. Metro 2033 provided a minimum of 6.7FPS and an average of 35.3FPS on its Medium setting, which isn't that great of a result.

The Very High setting with 'AAA' anti-aliasing provided worse results, as you would expect, with just a minimum of 3.5FPS and an average of an unplayable 21.6FPS at 7860x1440. 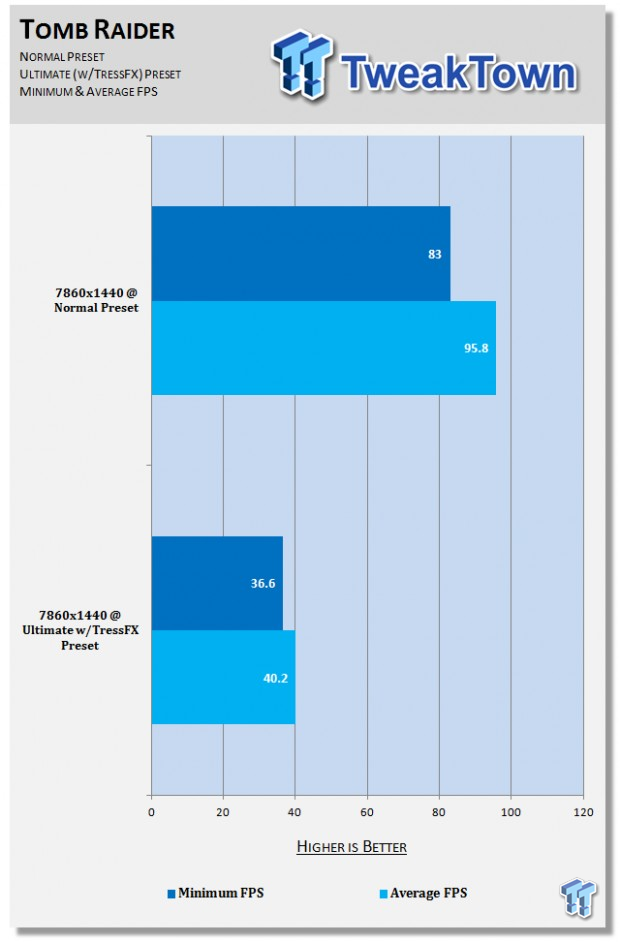 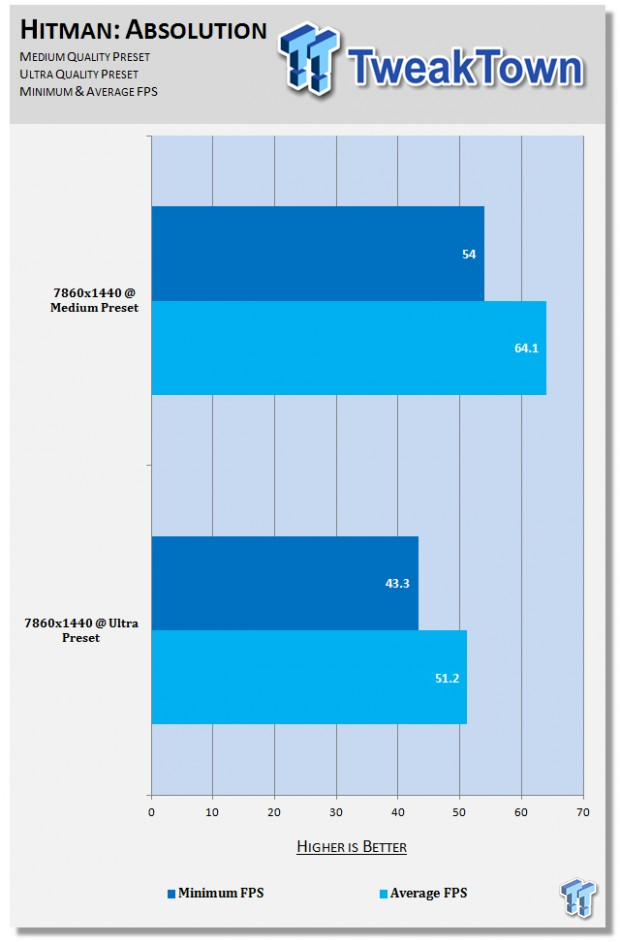 Hitman: Absolution played quite nicely with our GTX 780 SLI setup at 7860x1440, providing a minimum FPS of 54 and an average of 64.1FPS on its Medium preset.

Cranking it up to the Ultra preset saw the minimum FPS drop to 43.3FPS while the average FPS at our new super-high resolution was 51.2FPS, not a bad result at all.

Gaming at 7860x1440 on NVIDIA GeForce GTX 780s in SLI is great! I thought we'd see much less performance, but this is why we're providing you with the results from the Medium Presets. You don't need to crank both the resolution and detail level, and as you can see from the various benchmarks, it's not always possible with over 60FPS.

It's not worth dumping $1500 or so on some new GPUs if you're going to be seeing sub-60FPS, so you can just tweak the in-game graphic settings to Medium, and most, if not all of the time enjoy over 60FPS in the latest games.

We see an average of around 40FPS at 7860x1440 on each game's maximum detail levels, and around 60-90FPS at Medium. This is something I would recommend, running the high 7860x1440 resolution, but taming down those graphic details.

There's always the option of tweaking it to your liking, such as running Medium Presets in the game, and then tweaking a few of the details (shadow details on low, but increasing other graphic details).

Overall, gaming at 7860x1440 is a glorious thing, something I'm going to enjoy doing going into the next couple of months with Battlefield 4. We're going to follow this piece up with some overclocking on our GeForce GTX 780 GPUs, where we should see some improvements on the benchmarks at such a massive resolution.