Before this drive arrived on my doorstep, I, like many of you, hadn't heard of addlink. It turns out they have decades of experience in the mobile storage industry, and In recent times, they have partnered with Phison to produce both internal and external SSDs, including the S70 in 2019 and S90 Gen4 from last year; two drives we had in the lab for review.

Their most recent release comes in the form of the P20 portable SSD. This is a small form factor solution, aluminum chassis, and NVMe setup inside to offer 1050 MB/s read and write, which Addlink markets to consumers wanting to transfer high-resolution video and photos.

Capacity options include 512GB and 1TB and 2TB, all three using USB 3.2 Gen 2 with a USB-C interface. MSRP of the 2Tb model sent for review comes in at $299.99 with a three-year warranty. 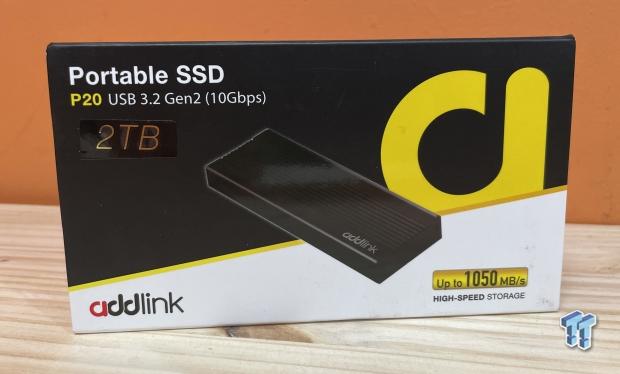 Packaging includes the capacity to the left at 2TB Addlink branding along the bottom and performance listed on the right. 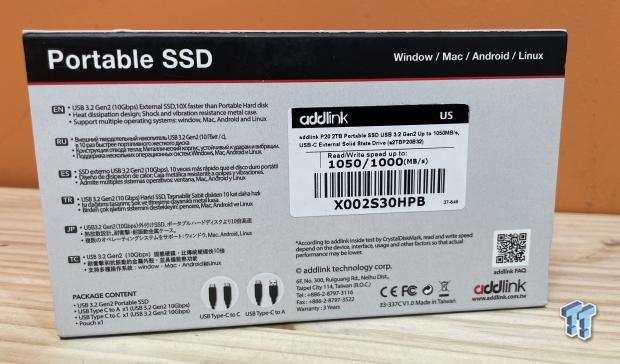 The back goes into detail about the drive's performance in several languages. Support for Mac, Linux, and Windows is noted along the top right. 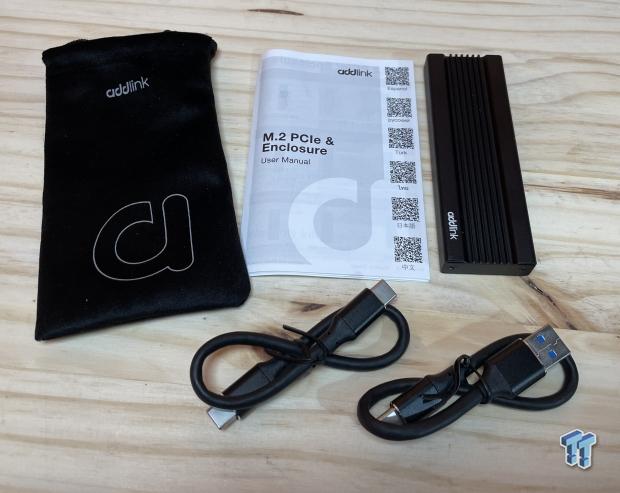 Addlink put together a rather nice kit for the P20. This includes the drive far-right, USB-C and USB-A cables, and a felt bag to store the drive.

The enclosure for the P20 is a rather basic gum stick aluminum shell complete with fins and addlink branding. 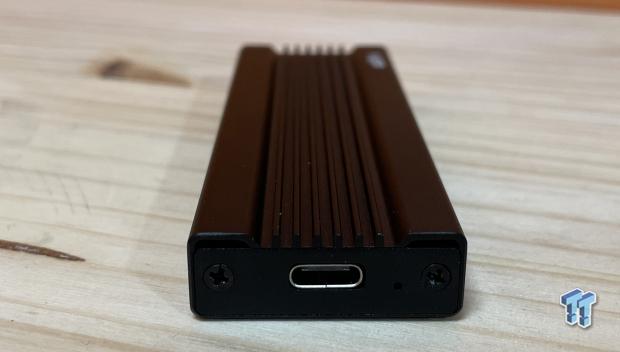 The end includes the USB- C connection and screws retaining the internal PCB. 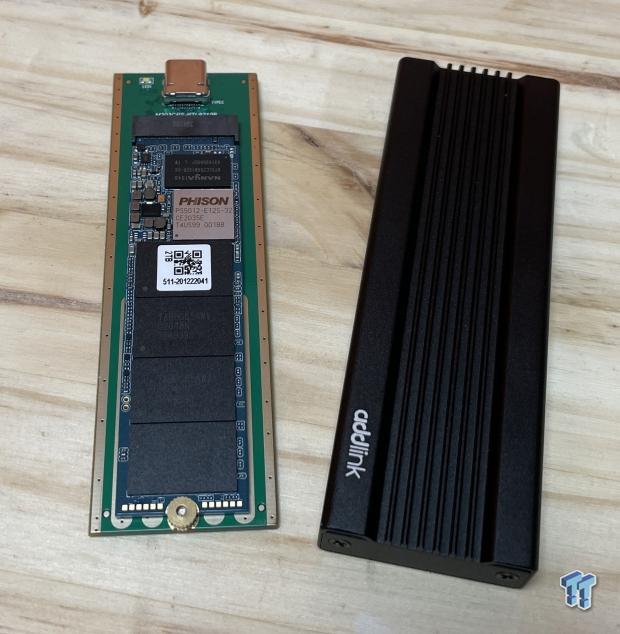 This wouldn't be a TweakTown review if I didn't pull the drive apart, so above, we have the addlink removed from the enclosure. A Phison E12S powered drive similar to the S70 is installed. 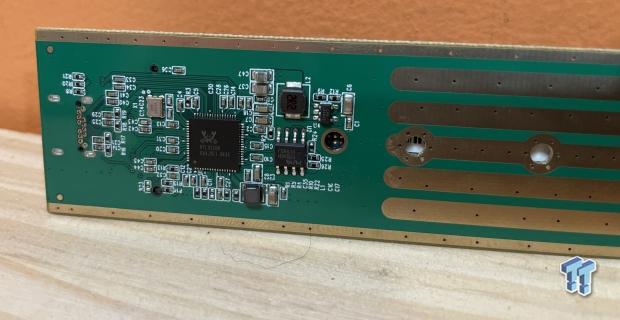 Above, we see the Realtek chipset for the USB-C to NVMe bridge. 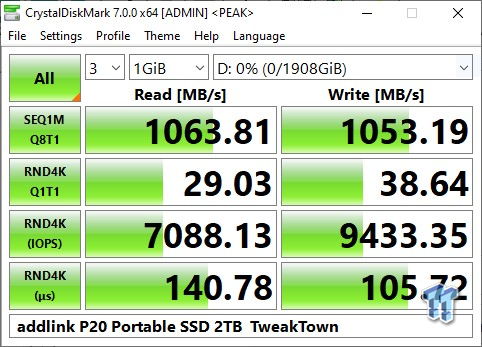 Testing included a few passes through CDM. This gave us 1063 MB/s read and 1053 MB/s write on par with marketing numbers. 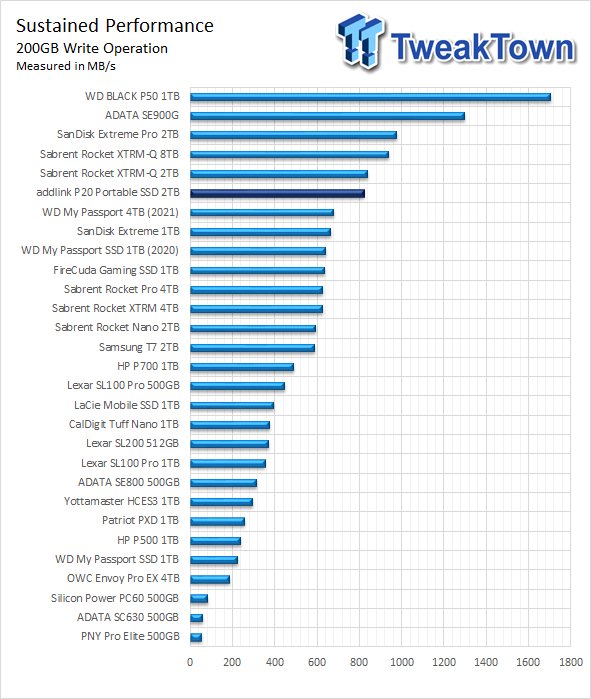 Putting this drive through our sustained performance testing, our 200GB file writes landed the addlink right behind the Sabrent XTRM-Q 2TB at just over 800MB/s sustained. 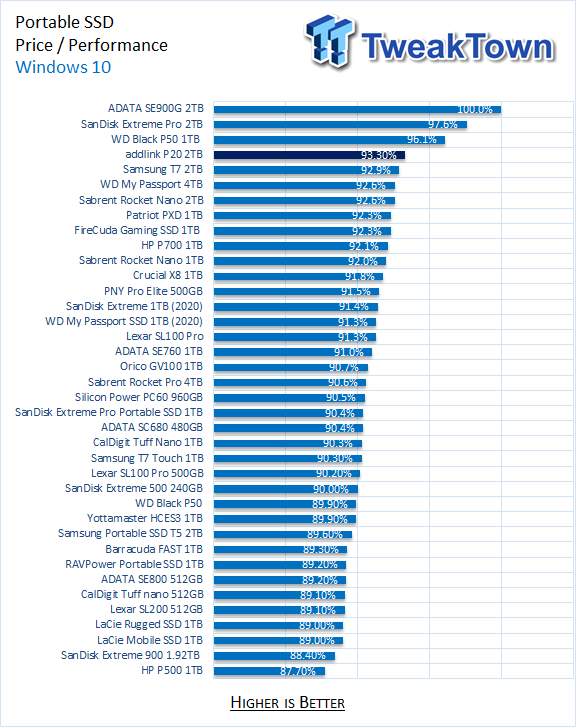 Putting together the drive's performance with its MSRP, we have the addlink P20 2TB solution and 93.3%, third in our charts for price/performance.

The addlink P20 is really a rather surprising portable drive that came out of nowhere to take top marks in our sustained and price/performance charts. This really speaks to the prowess of Phison behind the scenes creating platforms that vendors can design their own products around and still compete within the busy storage market.

Performance is legit for the P20, reaching the peaks of its interface at 1060 MB/s read and write and, as mentioned, an impressive solution, top 6 in our charts for sustained performance.

Build quality is likely the only place I see corners being cut; the enclosure isn't anything to write home about, just your basic aluminum shell similar to the bare enclosures being sold by Sabrent, MyDigitalSSD, and others on Amazon. With the enclosure having cooling fins, I would have liked to see addlink install this solution with a thermal pad to put it to use, but alas, we can't have it all. 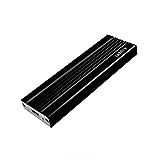 Addlink has a strong competitor in the P20, but market pricing is a bit on the high side and really should be addressed.