Consumers looking for a Thunderbolt 3 DIY storage solution have a solid option in the EC-T3NS from Sabrent!
Buy at Amazon

Earlier in the year, Sabrent released its first tool-free NVMe enclosure and quickly followed that up with a rugged model for those needing increased durability. Now, we are a few months removed from those releases, and we have the third enclosure, this time around beefed up with Thunderbolt 3.

Enclosures are extremely popular for consumers who want to DIY their own portable storage solutions. With the m.2 form factor offering increased performance and increased capacity options, it's the perfect fit for Thunderbolt 3.

The Sabrent EC-T3NS is a rather small enclosure, full aluminum in design at 4 x 1.5 inches. It is tool-free internally for securing the drive and the enclosure itself, offering connectivity over Thunderbolt 3 and the Type-C connection. It is important to note this is a TB3 device only and does not support USB 3.2 connections behind the USB-C port. 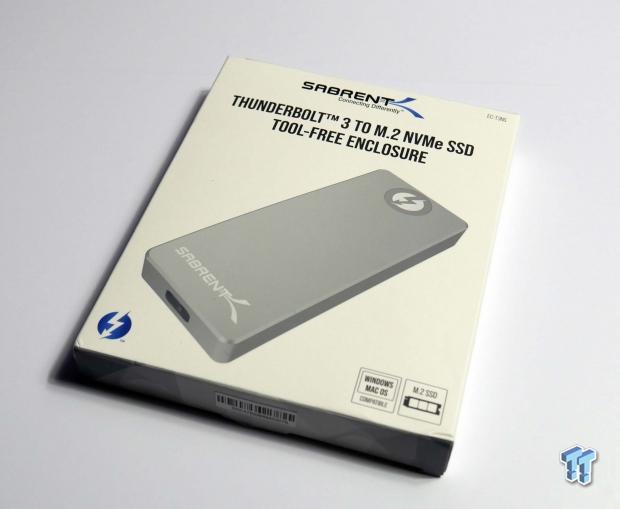 The packaging is quite similar to the portable drives we received from Sabrent. We have an image of the enclosure on the front marketing down below. 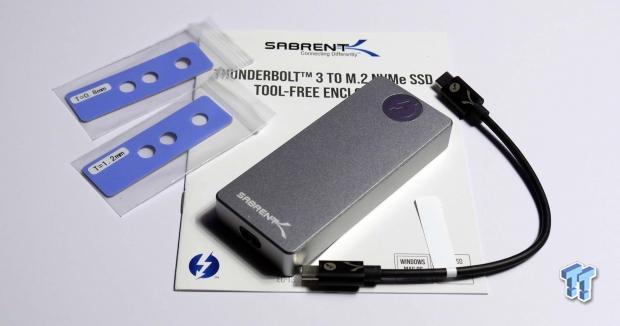 The enclosure itself is full aluminum, Type-C connection on one end with the Sabrent logo right around the corner. 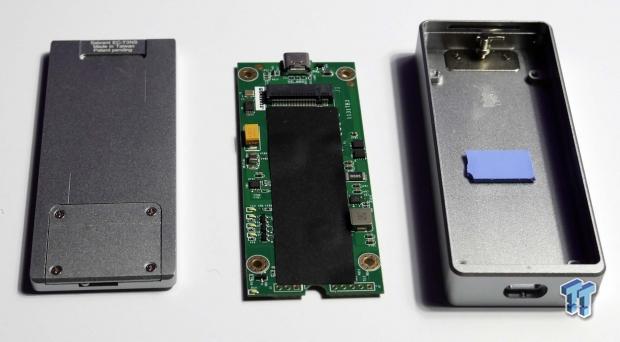 Opening up the enclosure, we have three pieces; the lid, PCB, and enclosure. The PCB uses the Alpine Ridge 6240 Thunderbolt 3 chipset, a low power solution that utilizes a PCIe 3.0 x2 link. 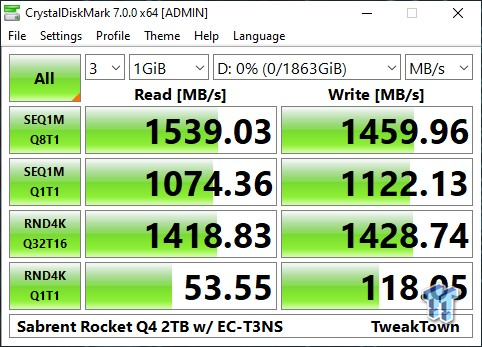 CDM is a staple in performance testing; version 7 has seen some updates in the testing workloads. Our first run through CDM produced; 1539 MB/s read and 1459 MB/s write using the Rocket Q4. 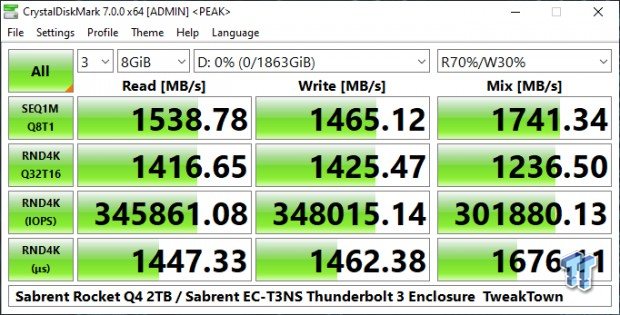 Looking back at the last two enclosures that have landed in the lab from Sabrent, the EC-T3NS sports that same level of quality we have come to expect. The fit and finish are smooth outside with a fantastic machined enclosure that perfectly fits the internal PCB. At the same time, the door includes a smooth finish locking mechanism completing the overall package.

The performance of the EC-T3NS is held back by the low power chipset used. Sabrent says this is to ensure wider compatibility for higher capacity devices that may draw more power. For our 2TB Rocket Q4, we had no testing issues and reached the benchmarks set by Sabrent marketing just under 1600 MB/s read and write.

As for pricing, the Sabrent EC-T3NS is a hard sell for me at $89.99 when you can pick up the EC-TFNE USB 3.2 enclosure for half the cost maintaining all the compatibility while sacrificing 25% of the performance. That said, the T3NS isn't a bad enclosure by any means; it is likely the best enclosure they have made to date, but it will be more suited for those that run data back and forth on multiple macOS platforms taking advantage of Thunderbolt 3 exclusively. 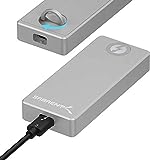 Consumers looking for a Thunderbolt 3 DIY storage solution have a solid option in the EC-T3NS from Sabrent!