TP-Link has done quite well over the last few years with its Archer line of wireless routers. Moving forward, they look to take that momentum and push into Wi-Fi 6, and for us, that journey starts with the Archer AX6000.

The design of the AX6000 goes back to the C5400, and most recently, the Archer A20 offering an octagonal footprint, perfect for mounting antennas on the corners. The Archer AX6000, like most first-gen Wi-Fi 6 solutions, is a Broadcom-powered platform.

It is based on the BCM4908 silicon offering four cores at 1.8GHz. Vendors do get some flexibility in the amount of memory they choose to implement, and for TP-Link, this happens to be 1GB. They have also added in 128MB of NAND flash for the firmware OS. Radios include two BCM43684 offering 4x4 connectivity for both the 2.4 and 5GHz bands; this equates to 1148Mbps for 2.4GHz and 4804Mbps for the 5GHz band. Switching of the eight 1Gbe ports is handled by the BCM53134, while a BCM54991 controls the 2.5GBe WAN interface.

This router supports Wi-Fi 6, 1024QAM, and Bluetooth 5.0 for setup along with band steering, link aggregation, and DFS channels. 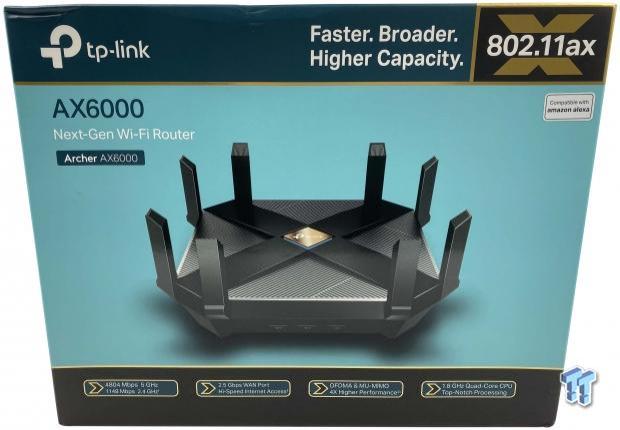 Packaging has changed slightly with the latest generation of Archer products. We have a calmer colorway with an image of the router centered, marketing along the bottom. 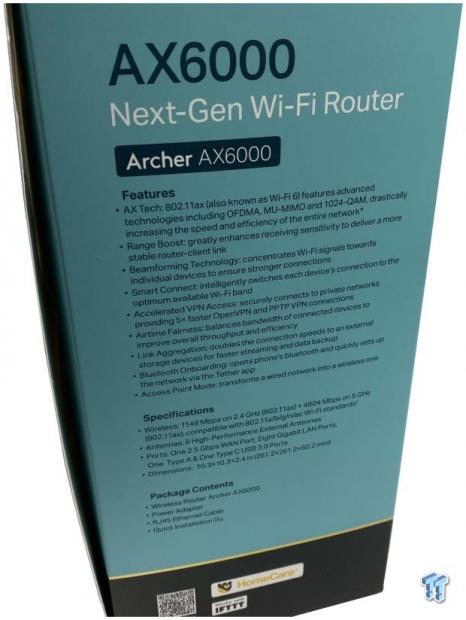 The spine offers a list of features and package contents. 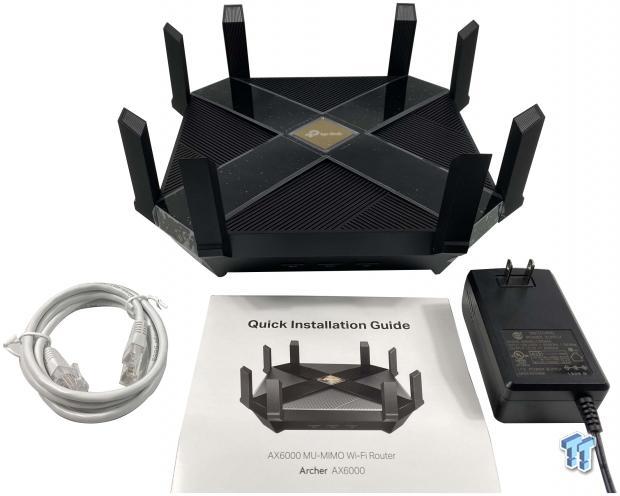 Package contents include the router, ethernet cabler, and power adapter. 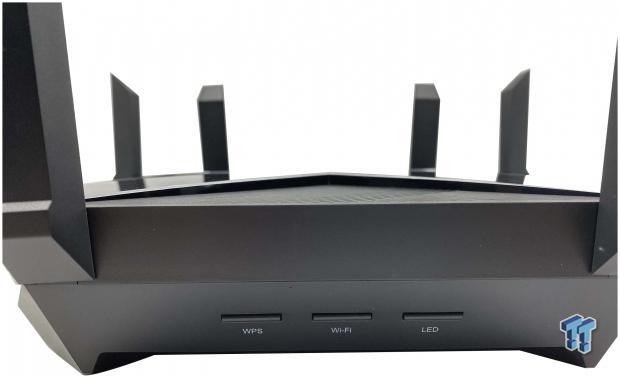 Diving into the router, we start on the side where we found a set of buttons for controlling WPS, Wi-Fi, and LEDs. 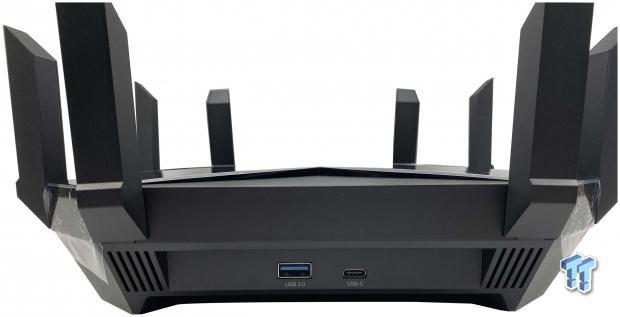 On the opposite side, we have USB ports, including a USB-C port. 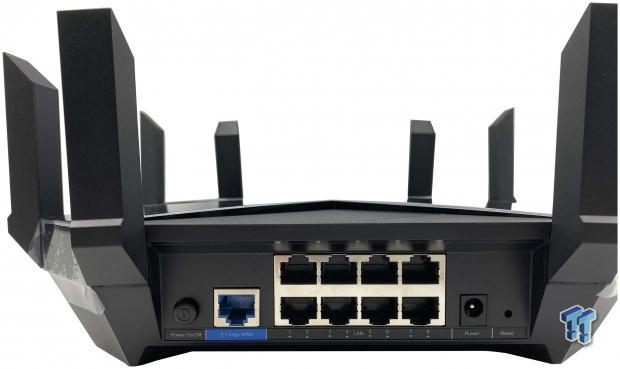 The back is full of connectivity with eight 1Gbe ports, centered power to the right, and 2.5GBe WAN to the left. 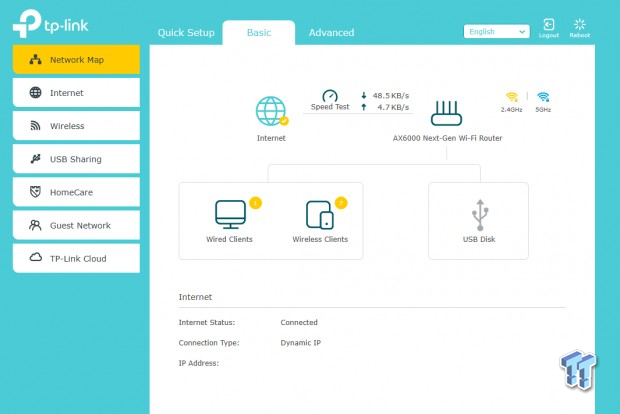 The firmware platform has stayed the same with minor adjustments. We have a dashboard offering a client list with an automated speed test included. 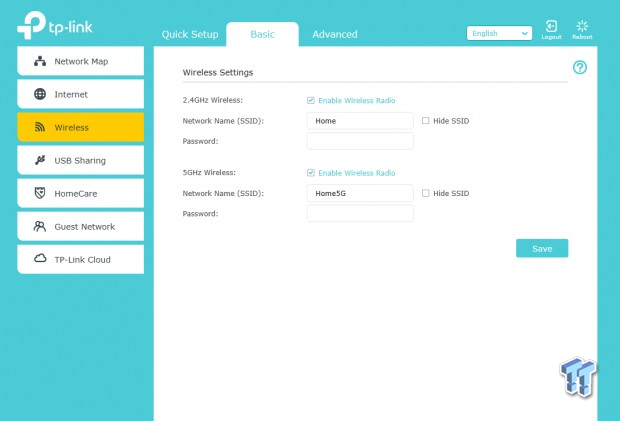 Moving through the settings, we have the ability to change SSID and password in the wireless menu. 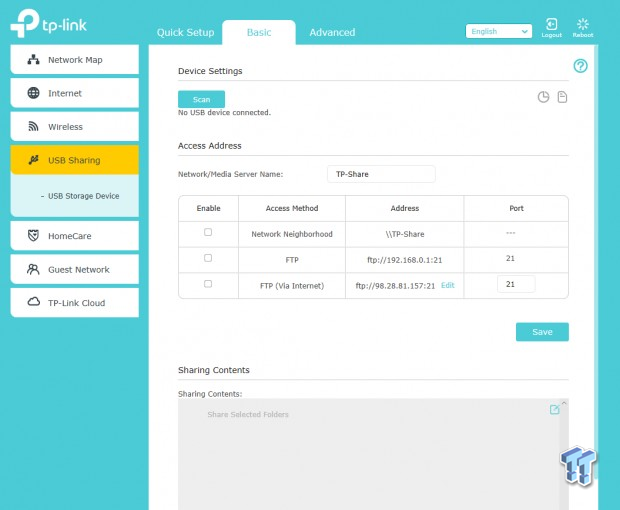 USB Sharing offers FTP and SMB access to any storage plugged into the USB-C or A ports on the side of the router. 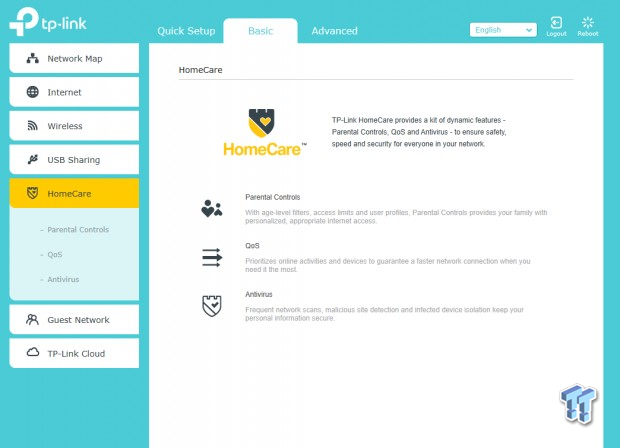 Homecare wraps parental controls, QoS services, and antivirus into one package for all TP-Link routers. 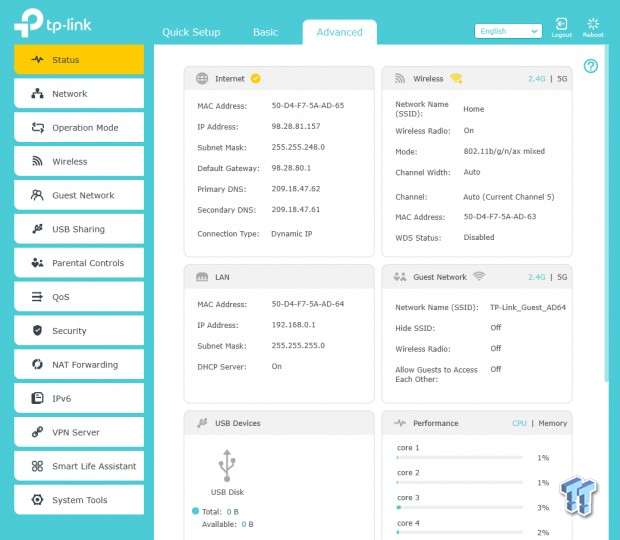 For those that want a finer level of control, you can switch to advanced mode opening up the router completely for your tinkering. 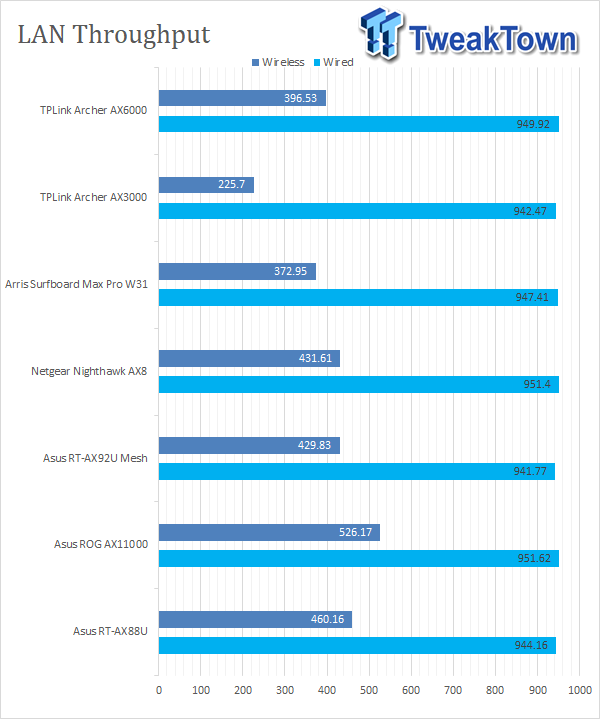 Testing put the Archer AX6000 right with all previous Wi-Fi 6 devices in our LAN throughput testing. Wireless to Wireless came in at 396 Mbps. 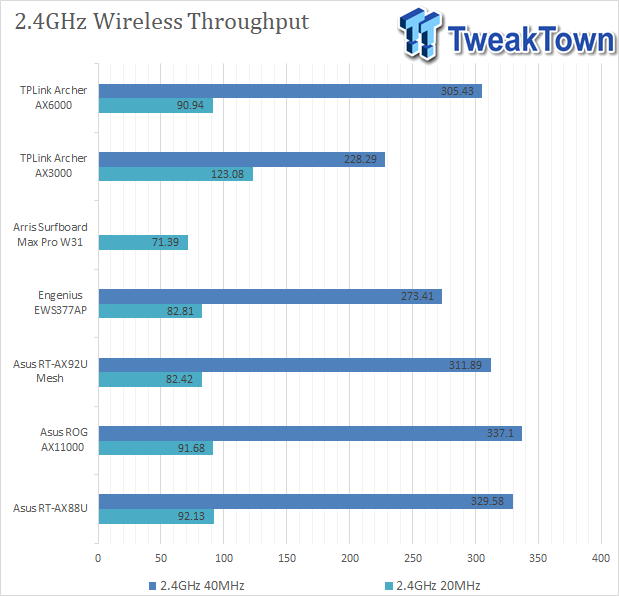 Getting into testing further, we have our 2.4GHz results for the Archer AX6000. Above, we were able to reach 305 Mbps with the 40MHz spectrum and 90 Mbps on the 20MHz band. 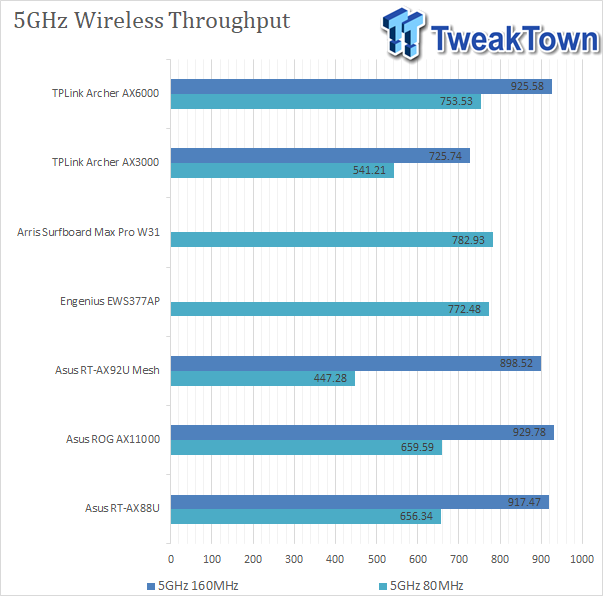 Into 5GHz, we see a pretty solid bump in performance testing the 160MHz spectrum, with results landing at 925 Mbps. The 80MHz band produces 753 Mbps. 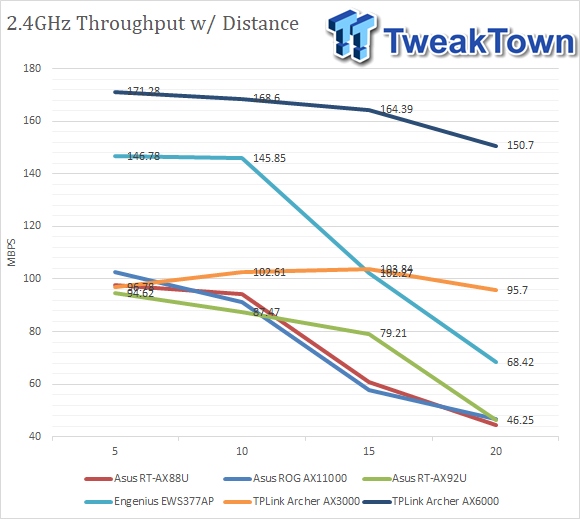 Testing with our iPhone11 gets us pretty decent mobile numbers, starting at 171 Mbps for the AX6000 ending at 150 Mbps at 20ft. 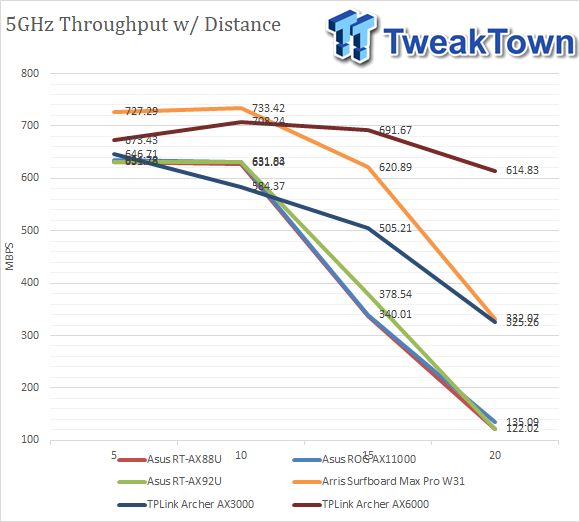 It should be known before we get too far into this, that performance of this and any routers going forward will be higher once 4x4 client adapters hit the market. For now, we are stuck with a plethora of devices that take advantage of the AX200 chipset from Intel, all 2x2.

The build quality of the AX6000 carries on from the WiFi5 Archer lineup with solid QA on the plastics and antennas. Like a few past appliances, the antennas are not replaceable and live on the edge with a hinged design, so don't get too crazy when folding them out.

The performance of this solution is at the top of our charts consistently and, most notably, with 5GHz 160MHz performance reaching the peak of our current capabilities. We did peak out LAN to LAN at 942Mbps and achieved a solid number in W2W testing as well at 396 Mbps.

The firmware platform hasn't changed too much since our last look at it with the Archer A series, and for me, that's a plus, as stability is fantastic in its current state. TP-Link does offer a substantial number of features with Homecare, including parental controls and antivirus, and with its advanced menu, it does provide all the control enthusiasts will love.

The current pricing of the Archer AX6000 has fallen below the MSRP a considerable amount. At the time of writing, several retailers are offering this router at $269.99, while the launch MSRP was $349.99. It's a solid deal. 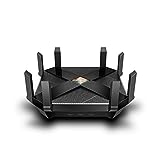 The Archer AX6000 is a fantastic mid-range offering with solid features and price point that is well worth a look.