When I first heard about the RL08 and saw that it was based on the same chassis as the LD01, I was admittedly apprehensive. However, with the mesh front, I feel more comfortable with this chassis even if it is still limited in HDD cage movement and component fitment. Overall the RL08 proved itself to be a good option if not a well suited one. Albeit with an optical bay.

During testing, the RL08 did quite well. The observed ambient during testing was 22.9C, with an RH of 44%. The RL08 showed an average delta over ambient for the CPU of 44.5C. The GPU came in at a delta of 40.3C. This is quite good as it is a little over 3C cooler than the LD01 with a smaller AIO, and also, the GPU temps saw a drop of 3C as well. This is likely caused by the included fans in which the LD01 arrived devoid of fans. I do like that SilverStone is finally coming around to the RGB trend, albeit slowly. I am not the aptest fan of RGB, but it has its place in the aesthetics of a build, and I can respect that. The RL08 and its included fans do a great job keeping the components cool and rather quiet during testing. The front mesh seems to flow quite a bit better than the glass on the LD01, although I'm not surprised, it is an entirely different aesthetic. The deeply smoked glass helps to hide cable management or lack thereof if you don't want it shown.

I still feel that the RL08 could be better from several aspects. The HDD cage should be on slotted tracks and removable for users who do not want or need it. The ODD bay, while I understand some users may want it, is unsightly to most users, and I hope as this case moves out of its life cycle and is replaced, we see some of these changes such as the omission of the ODD bay. The RGB connection of the fans is weird as it's a direct 4-pin plugin, and I do wish there was a more intuitive way to connect them for novice users. Also, the manual really could use some love as well, since many aspects will be hard to grasp for novice builders, and while the manual has illustrations, it's not always as helpful as we would expect. Lastly, in regards to the manual, please list every fastener included in the accessories; otherwise, even a seasoned reviewer may be left scratching their head at times.

The $119.99 price point that SilverStone has the RL08 listed for is not horrible. To be frank, this is a relatively reasonable value for what you are getting, although the RGB implementation of the fans could be better. The cooling due to the triple included fans opens up the possibilities of serious cooling of hardware right out of the box.

SilverStone did a good job of updating the existing LD01 chassis and making it something I can recommend for the right type of build. 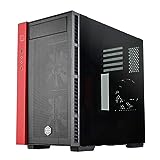 SilverStone made the RL08 into an inverted mATX chassis that has style and features that will impress many users. While the chassis is not perfect, it's a defined improvement over its predecessor.