Owners of Zen 2 PC platforms have been riding high since AMD snatched the performance crown from Intel. AMD's newest platform has introduced us to new technologies, process nodes and breathed new life into competition driven consumer bliss. Of everything Zen 2 has to offer us, we storage enthusiasts are most excited by PCIe Gen4 technology.

Our excitement stems from the fact that potential performance gains offered by PCIe Gen4 can be immediately realized with PCIe Gen4 SSDs. The same cannot be said for Gen4 graphics cards that use the next gen bus, because current graphic cards do not even fully exploit the full bandwidth of PCIe Gen3 x16.

Consumer NVMe SSDs are another story altogether. Because consumer NVMe SSDs typically use 4 PCIe lanes, it has not taken long for most flagship SSDs to be able completely saturate the PCIe Gen3 x4 interface with sequential performance. We've been stuck at a maximum of about 3,600 MB/s sequential performance for well over a year now because of the limited bandwidth available from a PCIe Gen3 x4 interface.

Zen 2 has changed all that by offering PCIe Gen4 x4 M.2 slots for NVMe SSDs. With double the bandwidth of a Gen3 x4 M.2 slot, PCIe Gen4 x4 M.2 slots that are populated with Phison E16 powered SSDs are delivering sequential performance of up to 5,600 MB/s. We mention Phison's E16 Gen 4 x4 controller specifically because it is the one and only consumer Gen4 SSD controller on the market today. Phison is the industry leader in this respect. Patriot does a nice job of protecting the VP4100 from potential shipping damage by placing the SSD itself in a very thick and substantial clamshell container. The drive features a low-profile all-aluminum heat sink that is both attractive and functional. To test how well the integrated heat sink does its job, we monitored temps as we filled the drive with 798.5 gigabytes of 80/20 mixed data on our open-air test bench with no active airflow.

The VP4100's integrated heat sink dissipated the heat coming off its powerful E16 controller with ease. The highest temperature reached while filling the drive with our data mix was a cool 59c. We say cool, because the drive will not even begin to throttle until it hits 82c, and the drive is rated to function all the way up to 125c. One thing is for certain, the VP4100 is throttle proof with its integrated heat sink in place. 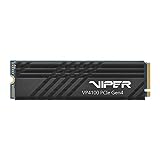