The last time we had our hands-on GeIL RGB memory was a while back, right about the time when RGB really started to take off in DDR4. With the EVO X kit we tested then, GeIL opted for switches and multiple cables to achieve RGB, and with others not requiring such installation hassles to deliver RGB illumination, we thought then that GeIL would not take long to catch up. The RAM we have today is much more user-friendly, and has gone the mainstream route of RGB illumination in the latest kit to hit the office.

The newest RGB RAM from GeIL comes in many flavors. Kits can be had in single, dual, and quad channel configurations, and the heat spreaders can be white or black. Speeds start as low as 2133MHz and top out with 4133MHz sets, with densities from a single 4GB stick, on up to 32GB kits, and the CAS timing ranges from fifteen to nineteen, voltage can vary from 1.25V to 1.35V, and for full control of the RGB lighting, you must have a compatible motherboard, as no GeIL software exists for it.

What we have to show you is somewhere in the middle of those specifications. In our hand is the GLS416GB32-C14DC kit, better known as the GeIL Super Luce RGB Sync. Our kit offers 3200MHz speed using the XMP 2.0 profile, and it comes with 14-14-14-34 2T timings. Even though GeIL kits are put through rigorous testing on the DYNA 4 SLT tester that GeIL has developed, if an issue comes up, you are backed by a limited lifetime warranty. 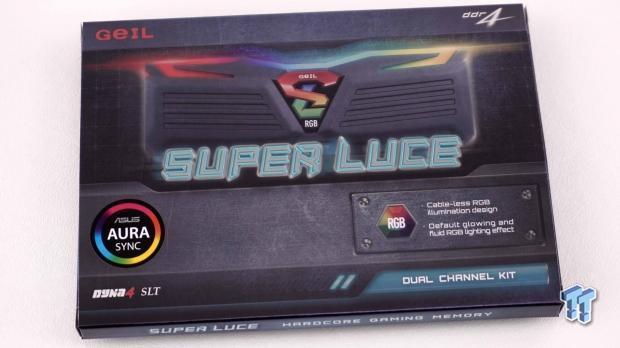 The packaging has an attractive appeal, with the look of metal while displaying the Super Luce module in an image near the top. While ASUS Aura Sync compatibility is shown with a sticker, the site shows compatibility with RGB Fusion, Mystic Light Sync, and Polychrome Sync as well. GeIL is also specific that this is a cable-less design, and that it does come with a default RGB effect for those without motherboard support. The last thing we see is that this is a dual-channel kit, but to see the RAM inside of the box, you have to flip it over. 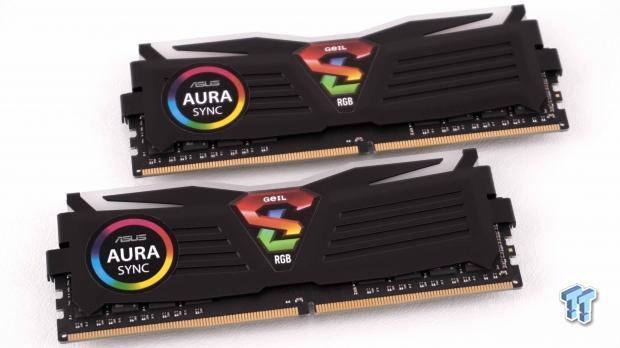 While these can be had with white heat spreaders, we have the black version to show you. Use of a black PCB is always a great start, and covering them and the ICs with highly stylized and grooved spreaders doesn't hurt it one bit. Again, we see the stickers for ASUS support on the modules, which we feel could have been left off the sticks, but it does go with the GeIL Super Luce RGB logo in the center. 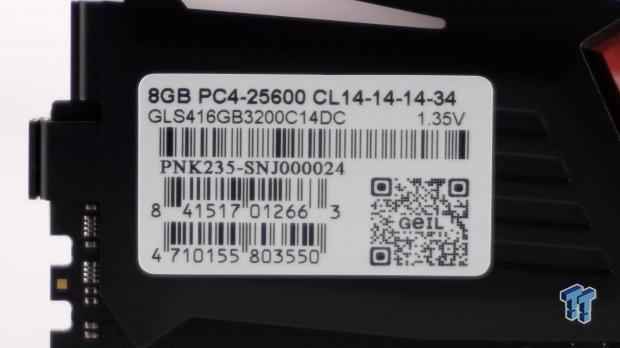 Spinning the module around to look at the other side, the ASUS sticker is gone and replaced with what is seen here. We can see that this is an 8GB stick of 3200MHz memory. The timings are shown, as well as the voltage, for the XMP 2.0 profile, and there is also a QR code to take you to the GeIL website. 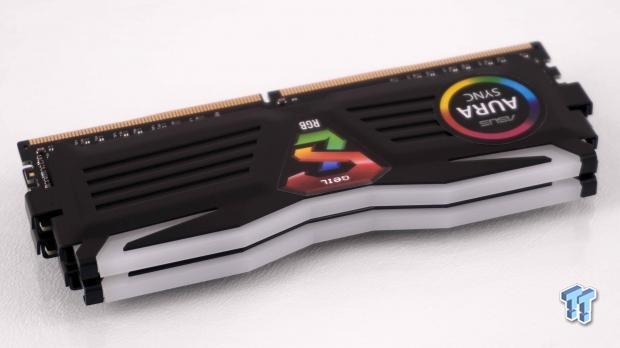 Part of the heat spreader makes what look like wings at the top, as the flank either side of the RGB light bar. The light bar is covered with bits of metal at either end, but as the bar angles in and back out, this area is flooded with RGB lighting from the LEDs mounted on the PCB. 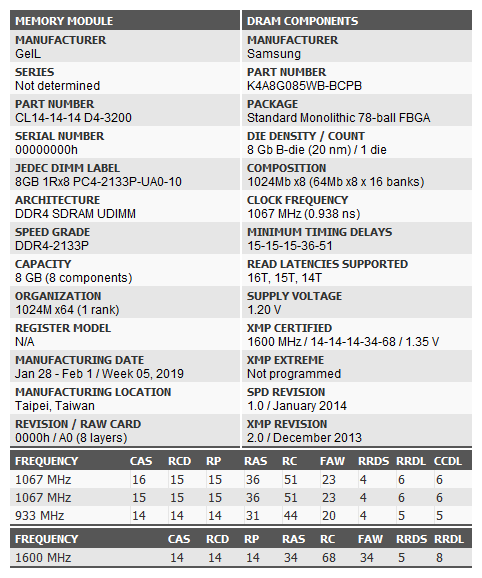 Rather than remove the heat spreaders, we opted to let software read the SPD file. Doing so shows that this kit is built upon Samsung K4A8G085WB-BCPB or B-die ICs. Along with the XMP information, we can also see that this kit was programmed only a few weeks ago. 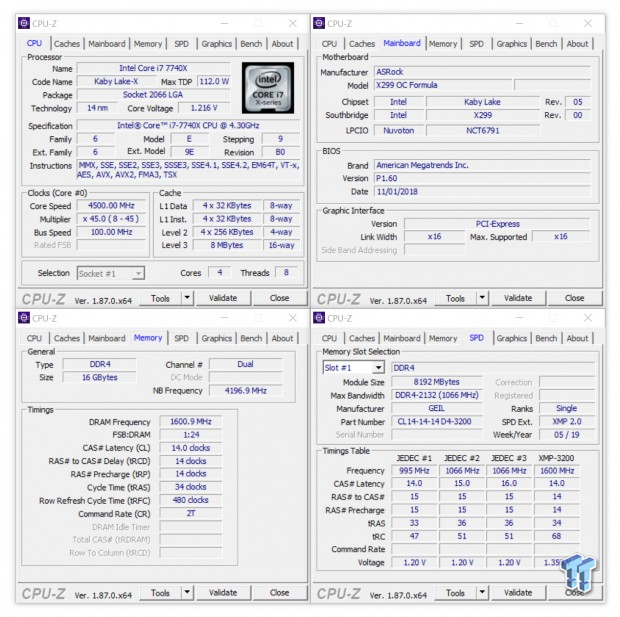 Our initial boot into Windows is with the XMP profile enabled, and we see we get everything the sticker on the memory says we should. Using 1.35V to power the VDIMM, our kit gets right to the 3200MHz speed with 14-14-14-34 2T timings. For reference, our motherboard took the VCCIO to 1.20V and the VCCSA to 1.35V when applying the XMP 2.0 profile as well. 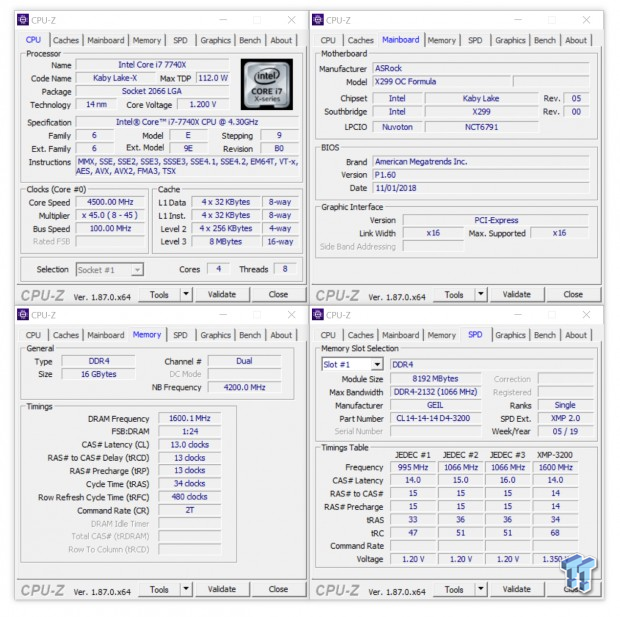 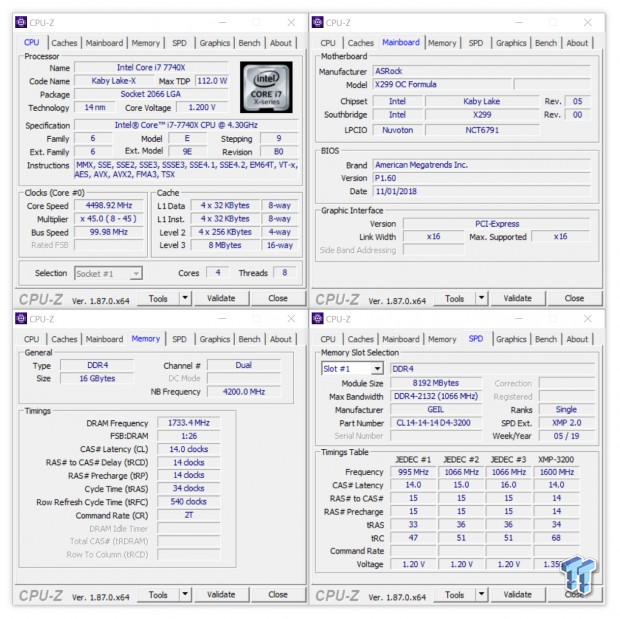 With the same voltages set as in the lower timing run, we were able to get more speed from the Super Luce RGB Sync. With nearly an extra 300MHz to gain for free, we got this kit to 3466MHZ with 14-14-14 timings. We did see higher speeds in Windows, but with the voltages we were applying, it was not stable enough to pass testing.

Using the results from AIDA 64 to tell the tale, the Super Luce RGB Sync perform better than any other 3200MHz kit, and even better than some of the 3400MHz kits we have in this chart. Reducing timings lowered all of the results, which is possible, but this benchmark shows that if you want the best performance, try overclocking with the XMP timings applied. 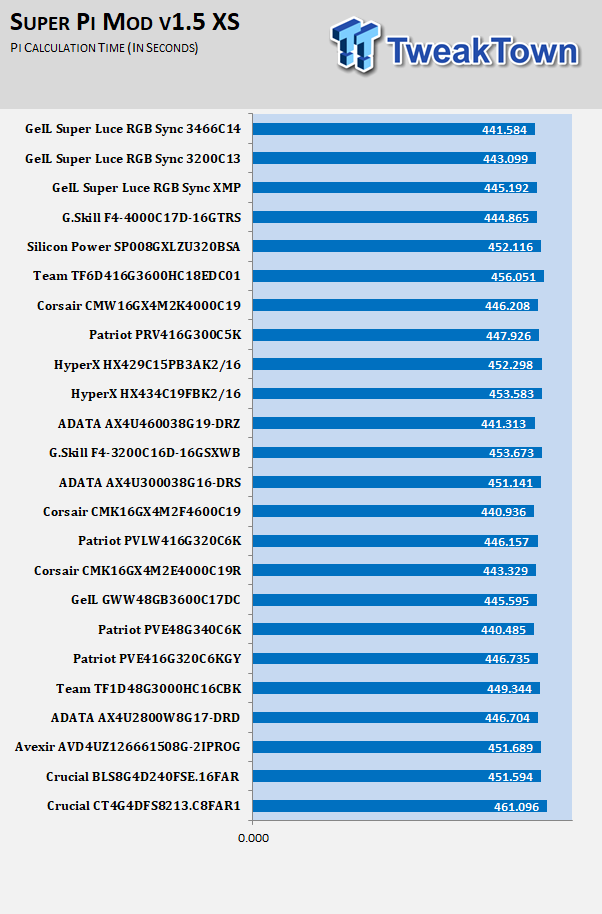 Super Pi, again, shows the superiority of the Super Luce kit over others we have tested at this speed. Nearly competing with 4000MHz memory, the results in this chart speak for themselves. Reducing timings does affect here, of about two seconds gained back, but when using the higher speed, it wins out overall comparing to what the ADATA 4600MHz kit delivers. 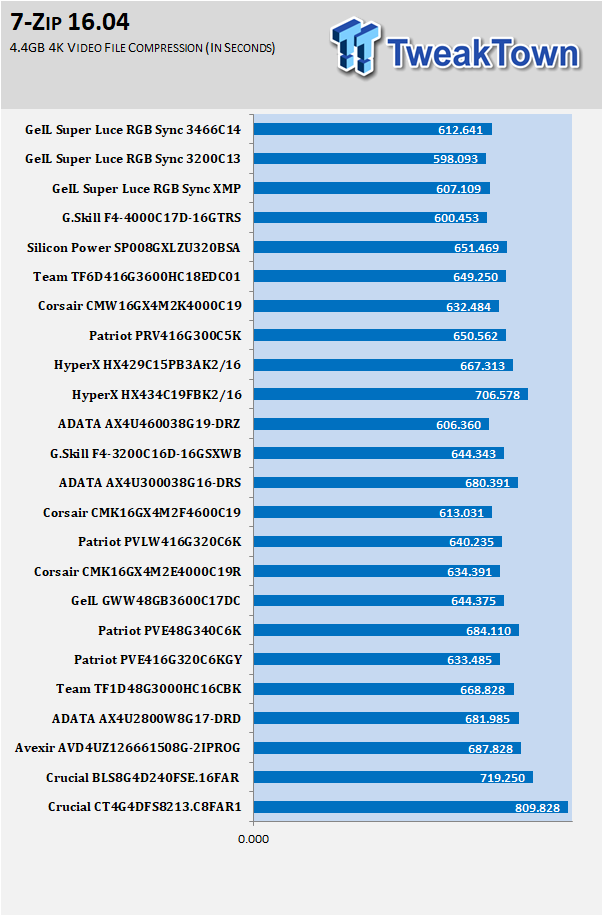 Compressing files is where the Super Luce pulls ahead yet again. With the best results of any 3200MHz RAM we have tested, and closer to 4600MHz testing results, we have to say GeIL put together an excellent kit of DDR4. Lowering the timings will gain quite a bit of time back from the XMP 2.0 settings, but higher speed proved to be a bit too fast. It is stable, but there are points where you can go so far as to reduce the gains.

Testing was a bit of a shock, and while many will profess that 3000 to 3200MHz is the sweet spot for DDR4 on both AMD and Intel systems, we have never had a kit perform as well as the GeIL have. While looks are a significant factor of any purchase for many, with numbers like we saw in the charts, we wouldn't personally care if they were bare PCBs.

Of course, RGB lighting, and motherboard RGB sync is more common than not these days; we appreciate the effort that went into the styling of the spreaders, and the way they contour with the LED light bar. We do wish the ASUS sticker was not on the spreaders, but as you will soon see, it is not that sticker that becomes our issue. 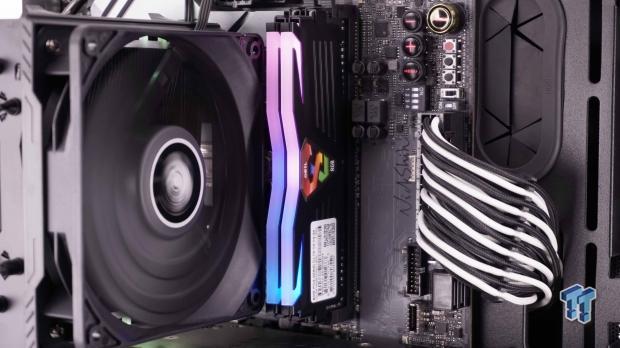 In our test system, the Super Luce RGB Sync memory is driven by our AsRock software. In a rainbow mode, as our motherboard changed colors, we say two, and sometimes three colors at once migrating from top to bottom. The LED illumination is not intense, as the opaque bar diffuses the light into a frosted display of color matching RGB effects. While we can see how, for the end-user, the product sticker is handy on this side of the sticks, but for the enthusiast, the sticker seen should be on the other side. At least we don't have the ASUS sticker showing on our ASRock motherboard though.

For the average user, we feel that GeIL has priced this specific kit out of your hands. Most 16GB kits at this speed start at around $115, and GeIL does offer a set of 16-18-18 timed 3200MHz memory at this range, but you will have to pay up for the binning and performance gained from this process. At $209.99 at Newegg and no showing of this product on Amazon, there is a premium for RGB lighting and use of Samsung B-die to deliver the impressive performance, as seen.

In our minds though, we would rather pay up for the performance this kit offers, and take the lighting and style as a bonus. While there are cheaper alternatives, GeIL has repeatedly shown in this review, why you should use these over many other options. Unless the 48.7 overall height is a concern, if we were in the market for some awesome looking sticks with performance to match, we would opt for this exact set of DDR4, as the GLS416GB3200C14DC are all around impressive.

The Bottom Line: The GeIL Super Luce RGB Sync preform above their class. Not only do they fall into the DDR4 sweet spot, they hammer on nearly everything in our charts. They do cost a bit more than the average set, but it is worth it to spend a bit more for these!