Synology had sizable success with its first two iterations of the wireless router. The RT2600ac to this day is one of my favorite platforms for a stable storage driven router. 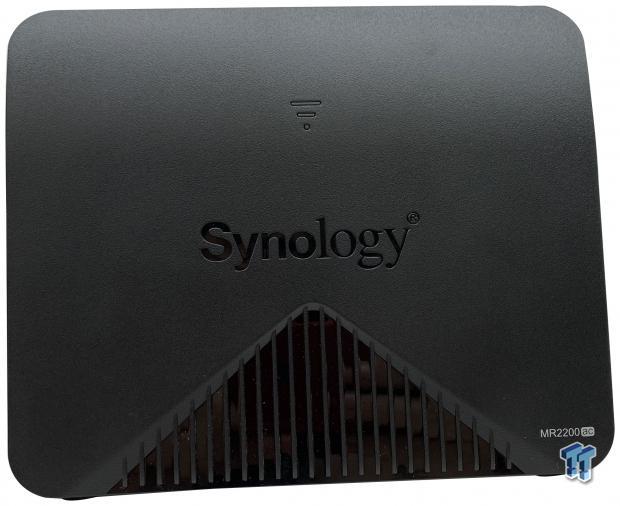 With the success of mesh platforms in the last year, Synology went to the drawing board to design and implement a low-cost option to adding nodes to it already popular SRM platform. The results of this are the MR2200ac, a tri-band platform offering two 5GHz bands at 867Mbps and a 2.4GHz band at 400Mbps.

This platform takes things an extra step offering MU-MIMO Wave 2 support along with Beamforming and DFS. Further, the MR2200ac is the first Wireless Router to support WPA3 and OWE. Like the RT2600ac, the MR2200ac takes advantage of Qualcomm with the IPQ4019, four cores at 716MHz.

This is paired with 256MB of memory and 8MB of flash as a buffer to the 4GB SRM uses. Radios include the 2:2 solution that's part of the 4019 along with a secondary QCA9886. The Ethernet switch used is the QCA8072. 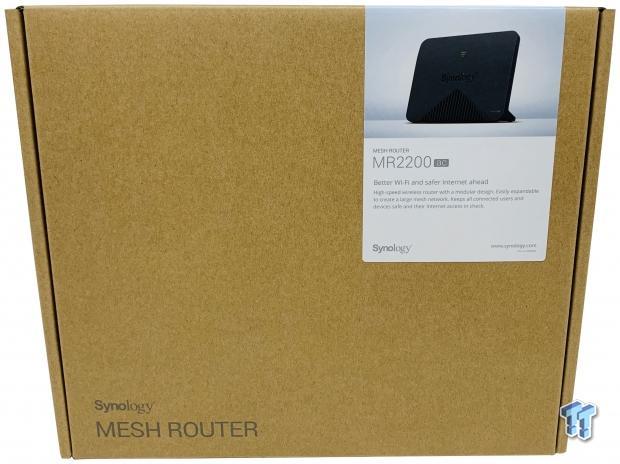 Product packaging follows what we see as the standard for Synology. Brown box with a sticker carrying model number. 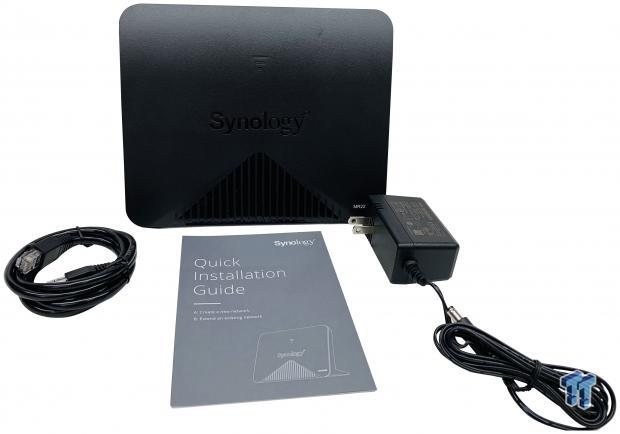 The scope of delivery includes the router, ethernet and power adapter along with a quick guide.

The MR2200ac is a vertical standing platform, saving space. The front offers branding, and a signal strength LED at the top, model number bottom right. 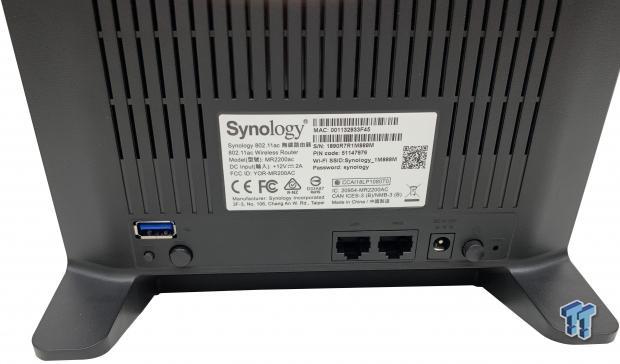 The backside offers USB 3.0 connectivity with LAN and WAN ports to the right. 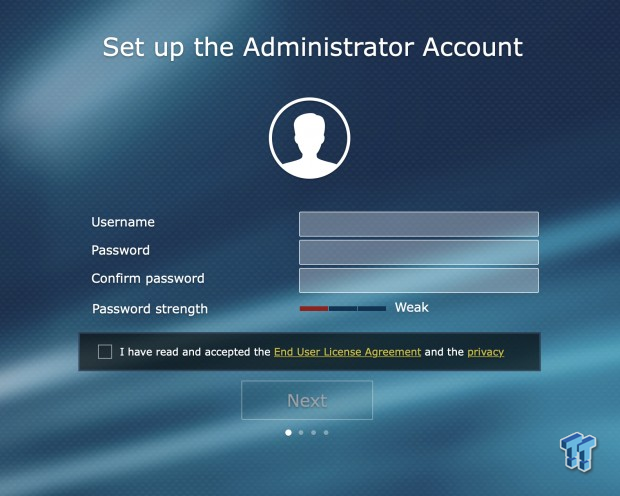 Setup follows the same process as the 1900ac and 2600ac. That said we won't go into too much detail but we do begin by setting usernames and passwords for the admin account. 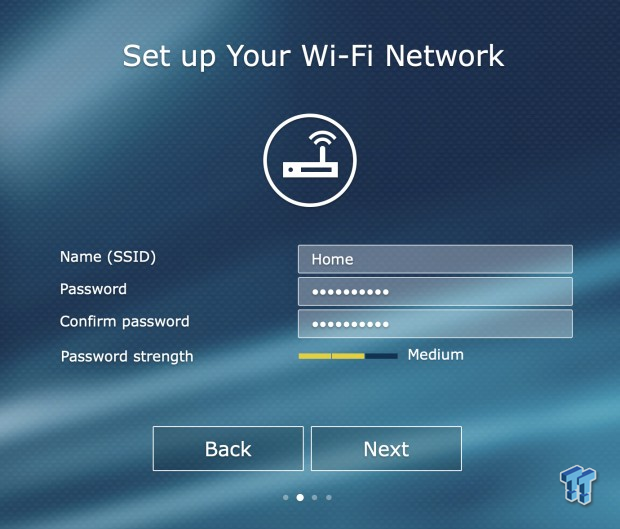 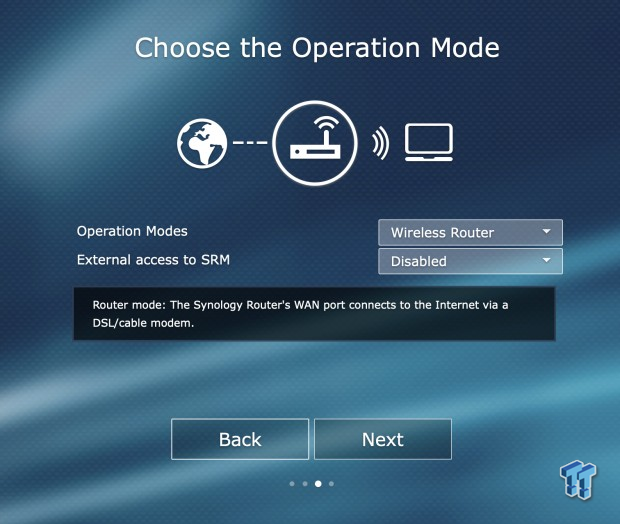 Continuing setup, you can choose here to use the MR2200ac as a router or node for mesh.

The dashboard offers access to desktop items such as file station for USB 3.0 storage, package center and control panel. Further, we have Wi-Fi connection for setting up mesh nodes and Network tools that offer traffic and device stats. 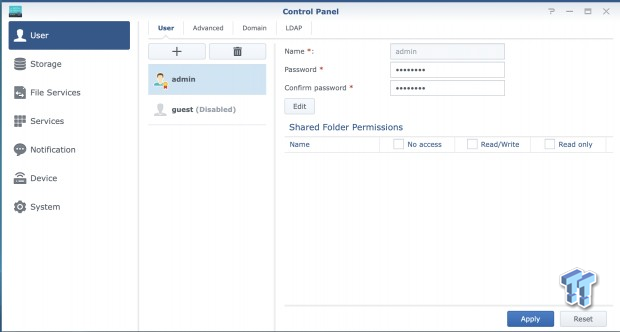 Control panel offers the ability to set up users for storage along with file services and notifications. 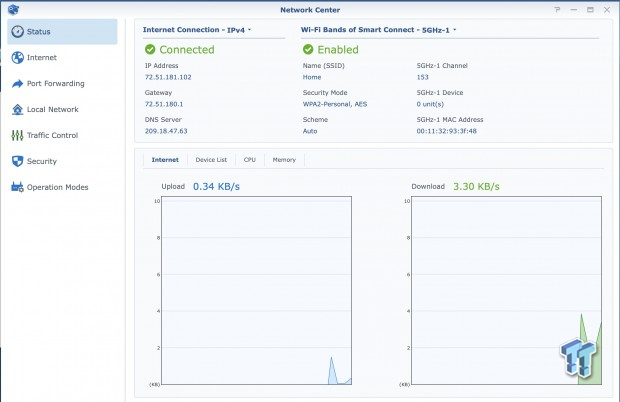 Moving into the Network Center, SRM offers WAN information along with traffic stats below. To the left are the controls for port forward, traffic control and security. 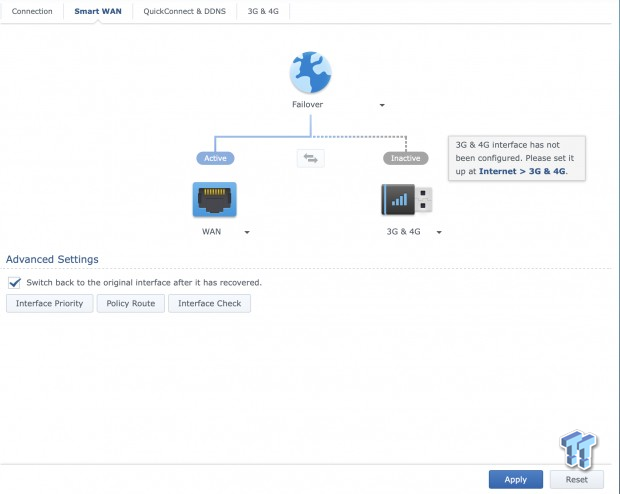 A unique feature of SRM as it has evolved is the ability to handle dual ISP connections with the ethernet WAN port and USB 3.0 with a 4G dongle allowing for failover if the router detects the primary broadband connection has gone down. 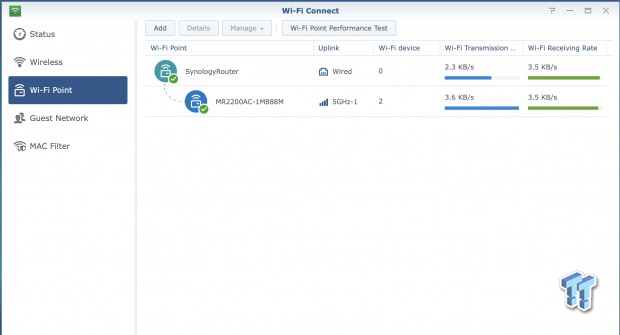 As mentioned, Wi-Fi Connect allows you to connect multiple MR2200ac units to the RT2600ac to create a mesh network. 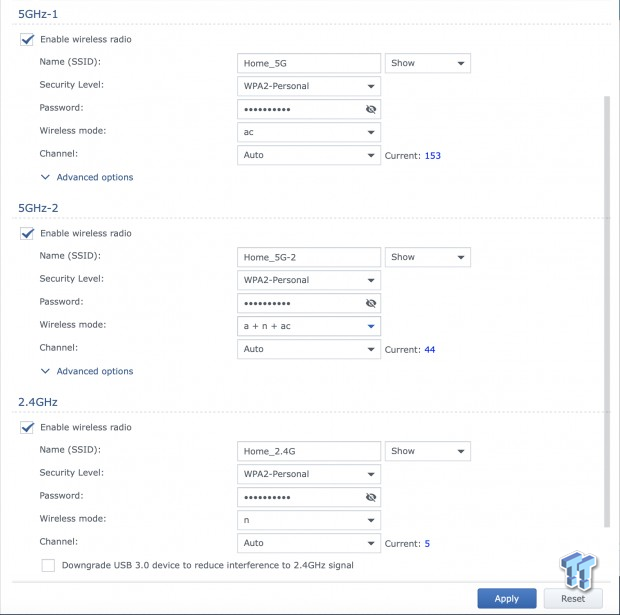 Last, we can take a look at the wireless option in the network center. As with previous SRM platforms, we have access to SSID, passwords and channel options. 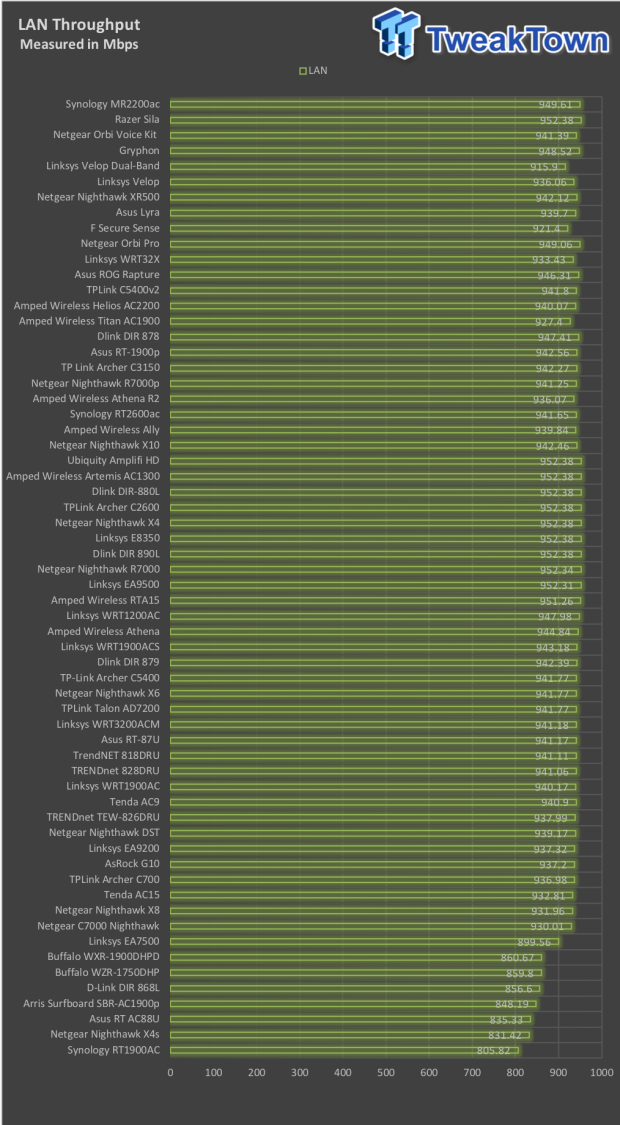 Wired performance is on par with the MR2200ac, although in this case the testing was done from WAN to LAN using a static network. 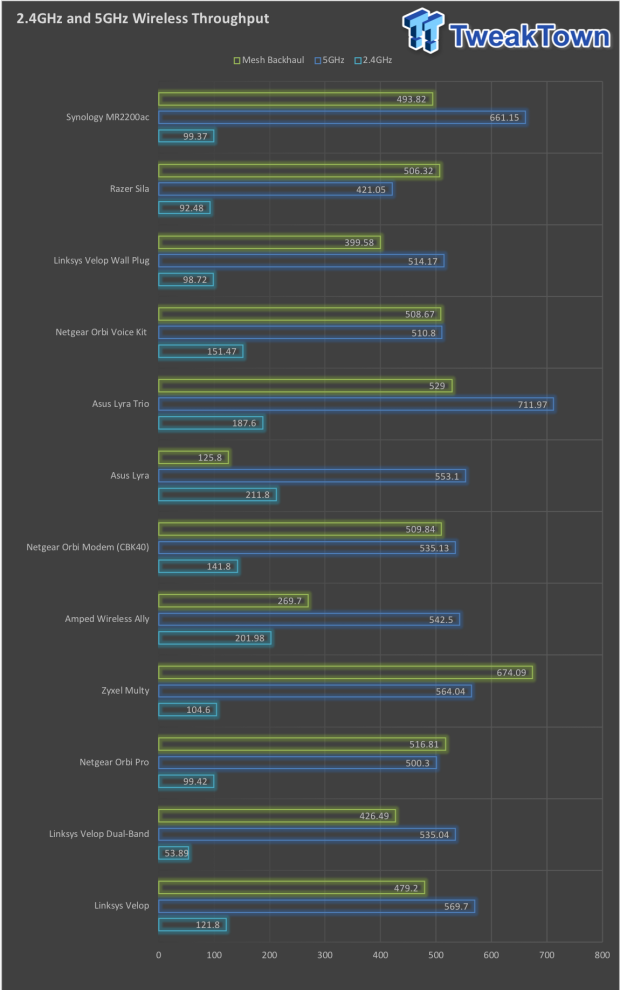 Moving into wireless performance, I was quite surprised by the 5GHz performance reaching 661MBps making it the second quickest Mesh platform tested. With 2.4GHz we see 99Mbps, average for all mesh platforms. 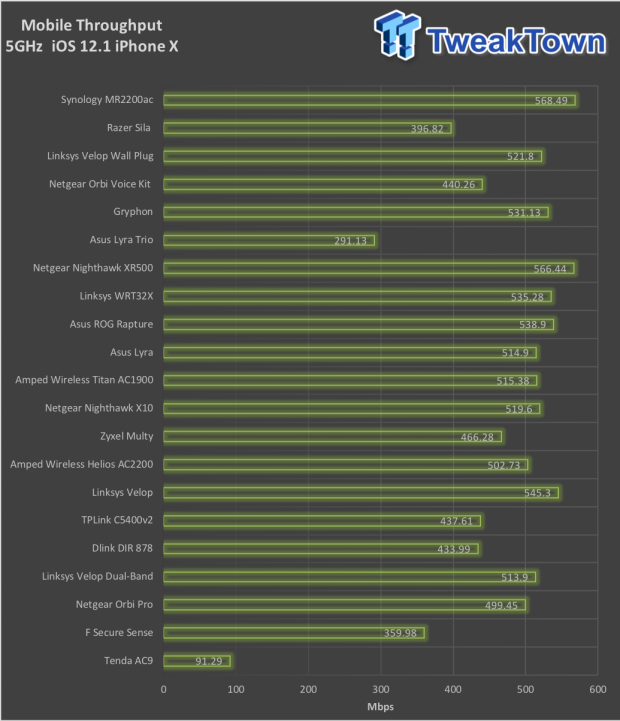 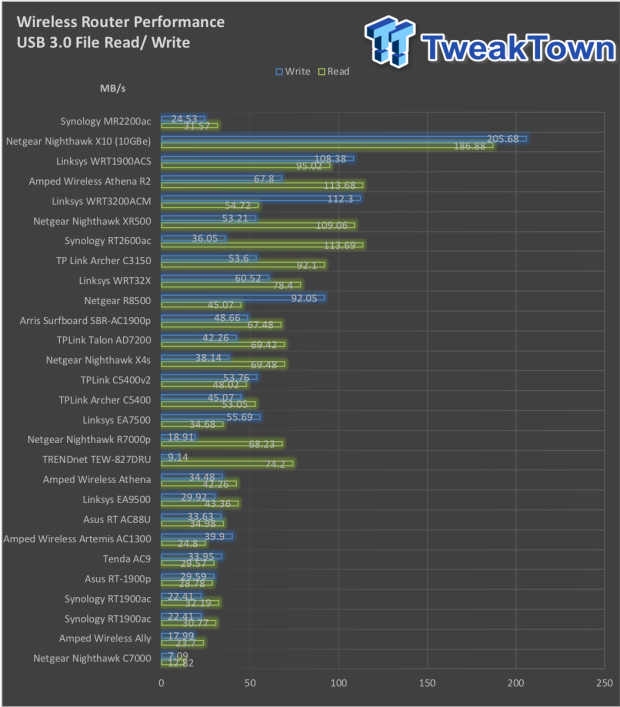 Storage performance came in at 31 MB/s read 24 MB/s write, easily the worst we have seen from a Synology SRM platform.

Like the Sila, I have had the MR2200ac since early November maybe even October. With new platforms arriving every week I often get a week or two at the most to evaluate the performance of a router in my own home network. With the Synology, I was able to use it for most of December before finalizing my testing and writing this article. That said, I'm quite impressed with the hardware Synology has put together for such a low price. Further, I think competing vendors have taken notice as well as many have released comparable solutions priced similarly.

Build quality is equal to the RT19 or 2600ac and really typical for consumer router platforms. I do like Synology has opted for internal antennas on this platform as the unit is already a vertically oriented solution, antennas would only make it taller. The front-mounted LED system is quite helpful in placing the node during setup and on that subject adding the MR2200ac to an existing RT2600ac as a node is as simple as a few clicks in SRM.

The performance was superb in 5GHz, where I was able to reach 661Mbps second only to the ASUS Lyra in testing. 2.4GHz performance came in at 99Mbps, average among recent 2:2 mesh platforms and backhaul while decent was a bit low to sustain the 5GHz performance across nodes, peaking at 493Mbps.

The MR2200ac is a unique platform that while being designed as a mesh node fit for pairing with your RT2600ac can really function quite easily as an entry-level router. In fact, the hardware used in this platform is equal to much more expensive solutions like Google Wi-Fi, Linksys Velop and Orbi. That said Synology has positioned the MR2200ac perfectly, offering it at a $139.99 MSRP making it cost effective when building out your home network, especially if you already rely on them for network storage.

The Bottom Line: The MR2200ac completes Synologys Wi-Fi 5 portfolio with a mesh node that offers the performance we want at an amazing price.