Packing in 18 cores and 36 threads into a CPU with a 200W CPU and the ability to scale up, results in excellent performance from the Intel Xeon Gold 6154. 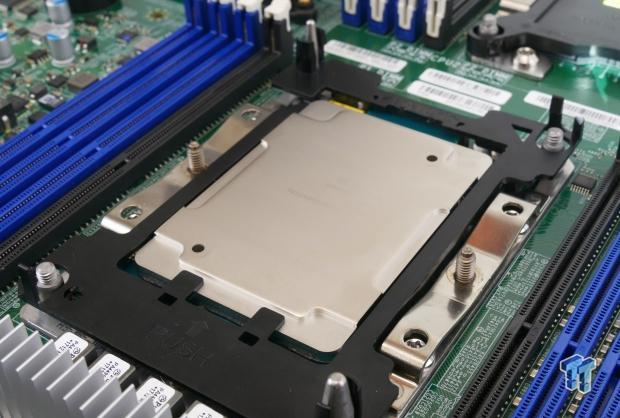 Have you ever wondered how an enterprise-grade CPU does with consumer workloads? Well, today you will find out just that. We take two Intel Xeon Scalable processors, two Xeon Gold 6154 processors, run some workstation benchmarks, and then some more consumer-facing benchmarks.

The CPUs are pitted against the latest and greatest CPUs from Intel and AMD in benchmarks such as CINEBENCH, SuperPI, and even 3DMark. We also do compare it to a previous generation dual Xeon system and an AMD EPYC system, although the EPYC system uses only a single CPU.

We won't be going into crazy depth about the microarchitecture of the CPU, but we will cover some basics. The CPUs each have 18 cores and 36 threads, and all cores are connected through the mesh architecture instead of a ring bus, which is much better for heavily multi-core CPUs.

The CPUs are built on 14nm lithography, and both CPUs have a 3GHz base clock and a 3.7GHz turbo frequency. The TDP of each CPU is 200W. The CPU has three UPI links and is capable of scaling up to four CPUs. Each CPU has 48 PCI-E lanes and supports up to 768GB of 2666MHz in six channels.

Surprisingly, the CPU doesn't support Optane Memory or Turbo Boost 3.0 like it's consumer Skylake-X counterparts, but it does support more manageability features. You also get support for AVX-512 (or called AVX3 sometimes). 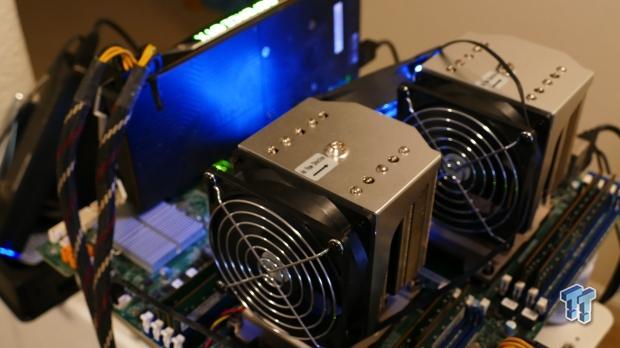 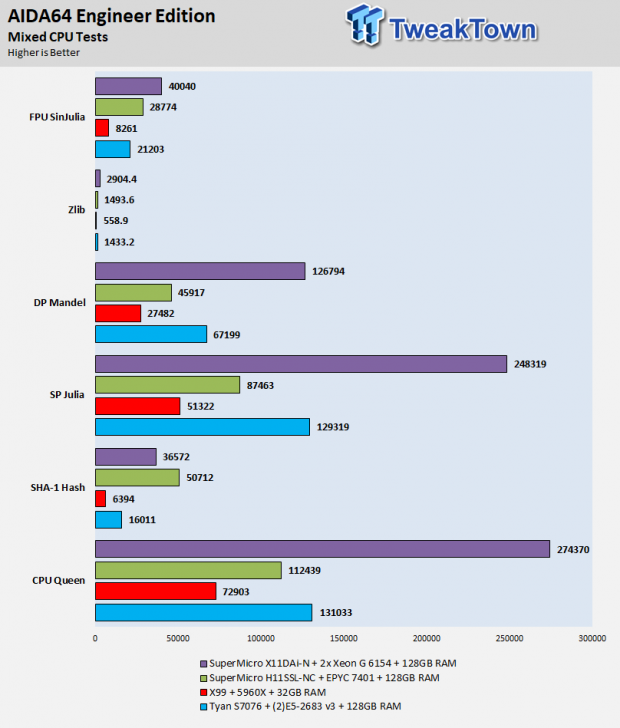 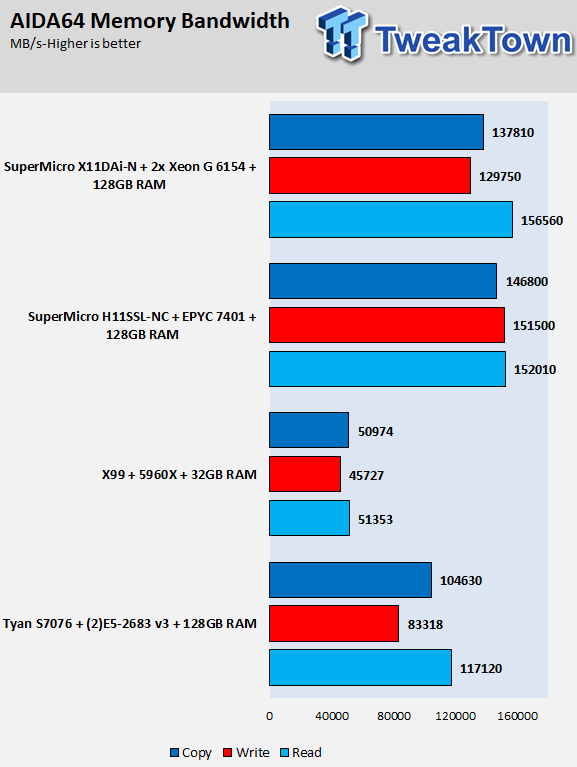 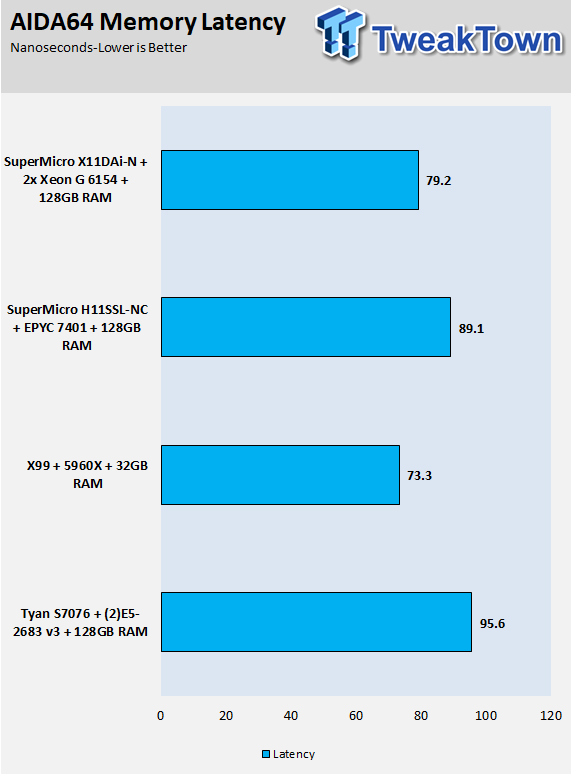 There are a few things you might want to consider before judging the performance of the processor, for starters, it's actually two processors and not just a single CPU like AMD's EPYC processor. It also features a 3GHz base clock, which is quite high. The CPUs do exceedingly well when both CPUs can be utilized, but you should be aware that not all consumer programs allow for both CPUs to be utilized, but SPECwpc does.

AIDA64 tests seem to be a mixed bag of results, but most looked like they made use of both processors, and we can see huge generational improvements over the two Xeon E5-2683 V3 CPUs. Memory bandwidth is slightly faster or slower than EPYC depending on the test, but memory latency is slightly better. 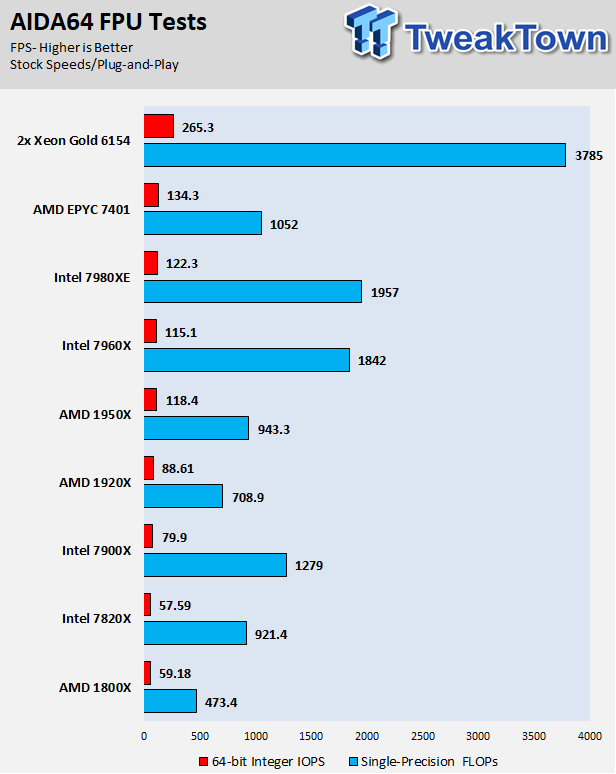 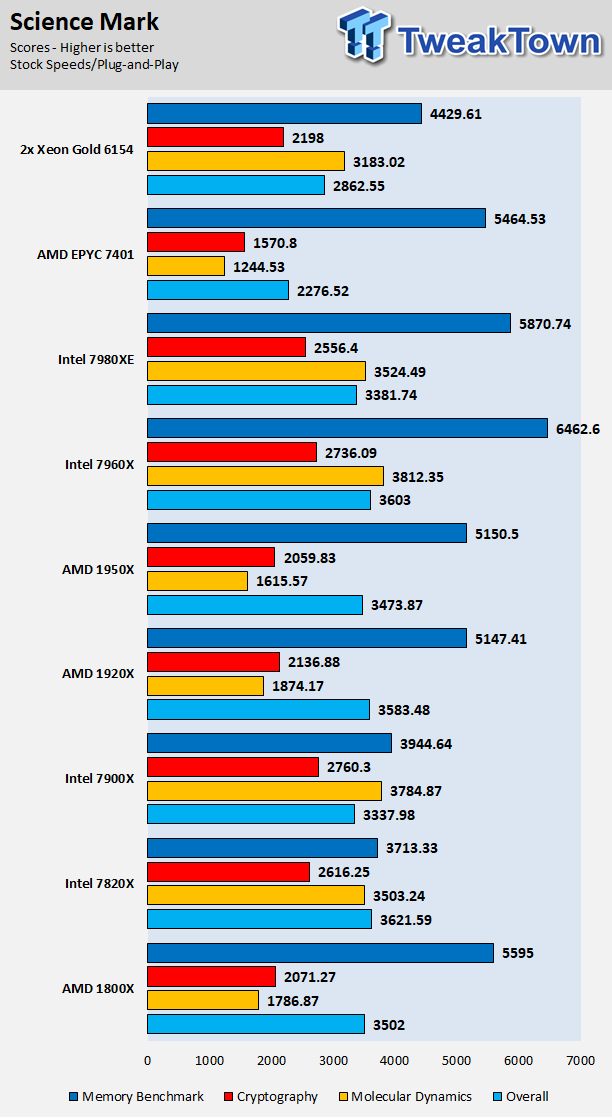 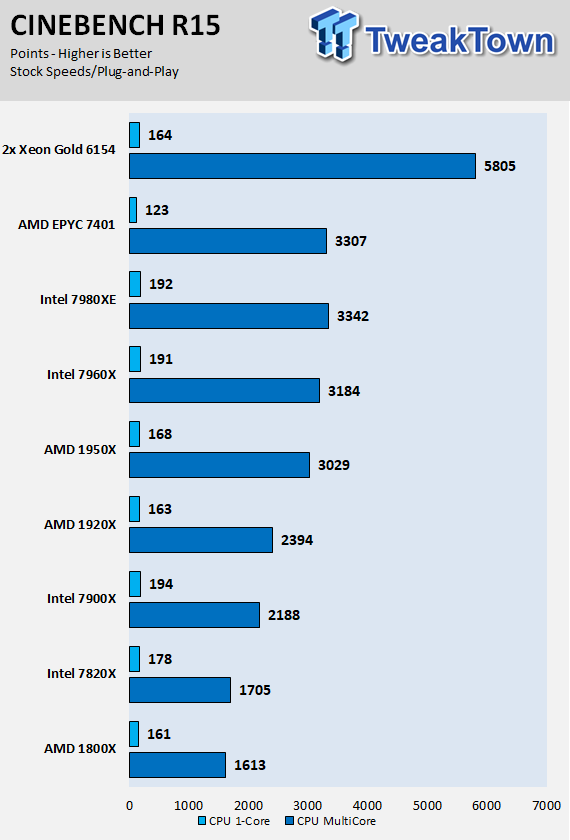 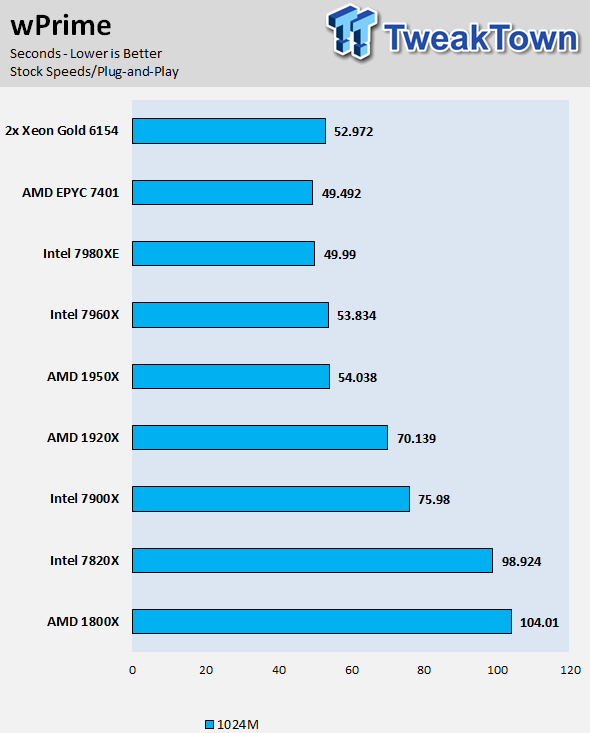 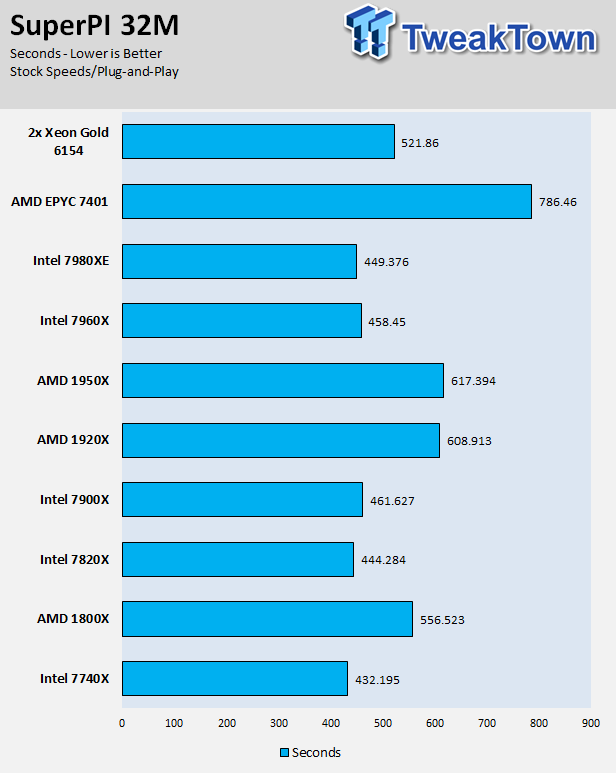 Now we compare the CPU against retail CPUs in a variety of tests. Look at those AIDA64 IOPS and FLOPOs numbers. Science mark is an interesting benchmark, and it doesn't seem to scale well with more cores, as it's limited to 32 cores.

However, it's higher base clock gives it an edge of the EPYC CPU. CINEBENCH results are crazy, single core performance is in line with the 1950X, and multi-threaded scales well. We want to remind you that each of the two CPUs costs around $3,500, so cost wise it doesn't scale well. Oddly enough it doesn't win in wPrime, and EPYC and the 7980XE do better. SuperPI results show the decent single core performance of the chip. 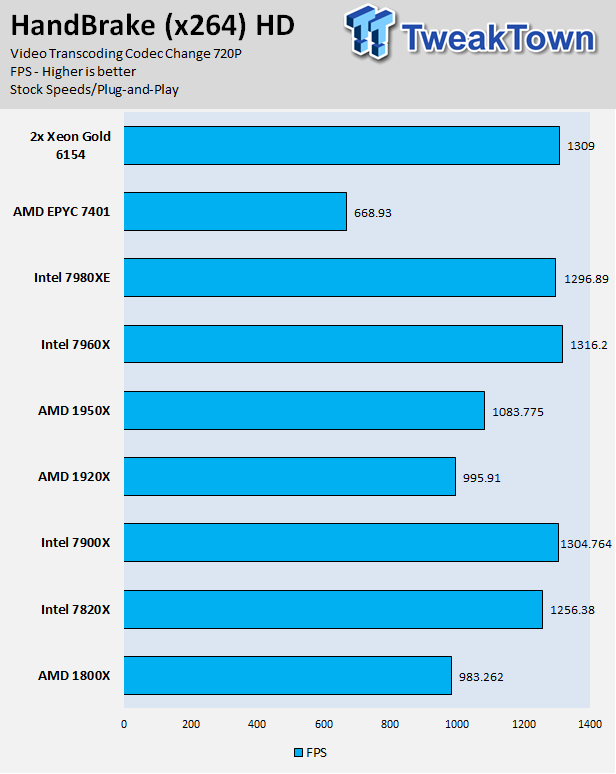 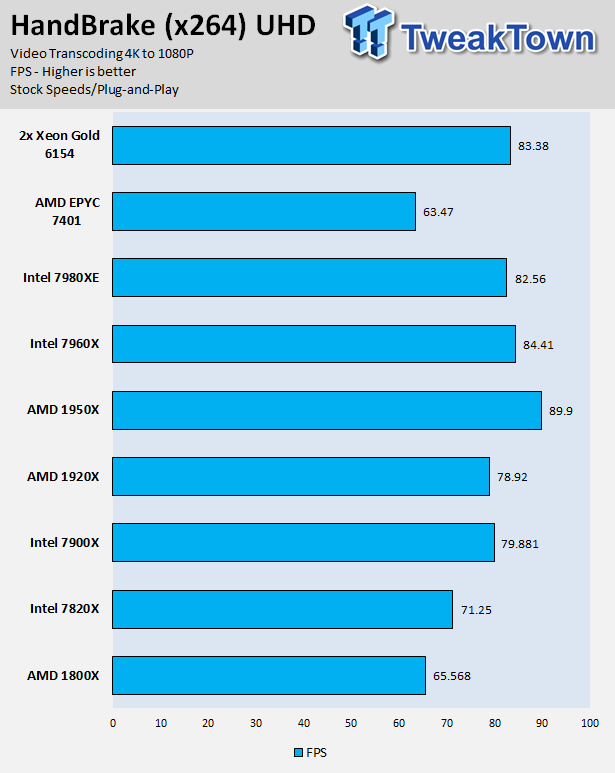 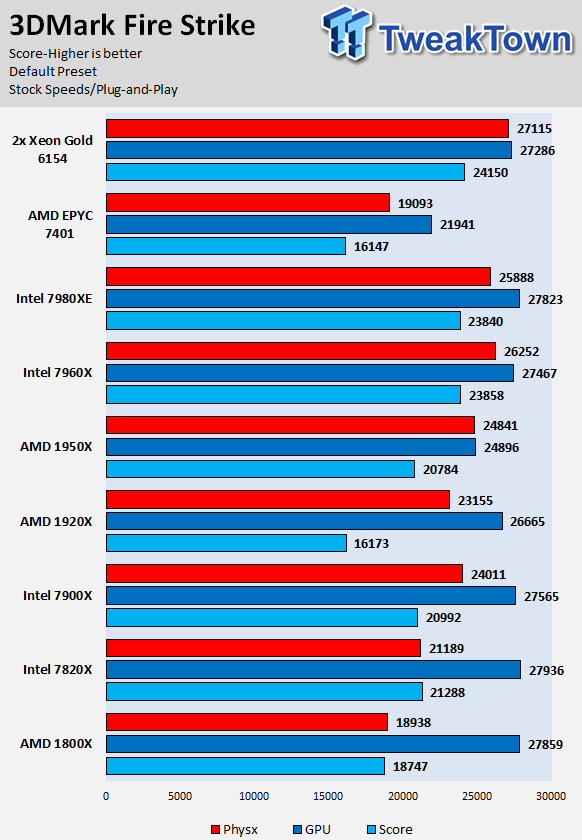 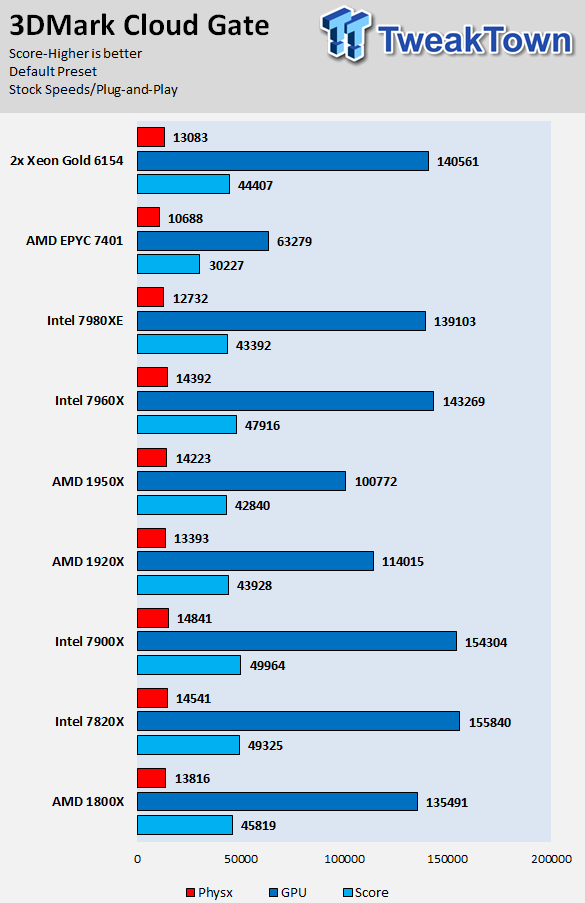 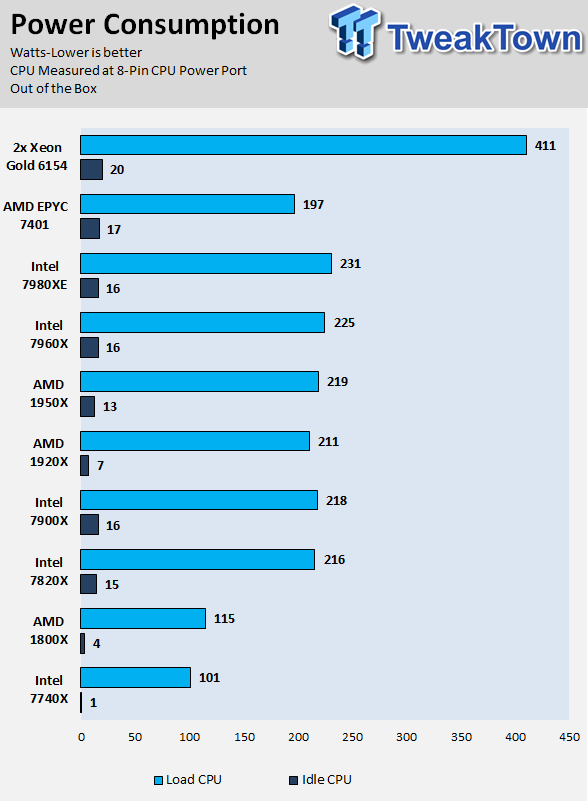 HandBrake typically doesn't use both CPUs, so what we are seeing is mostly single CPU performance. While it does well in Handbrake converting 720P videos, it doesn't do well as other CPUs with 4K videos.

Gaming results are quite decent, which was very surprising, this is possibly due to the higher frequencies the CPU offers. Power consumption is insane, with a power bill around $6 a day for me if the system sits idle. We should mention there are two CPUs so that matters.

This is where you can fast forward to the final section of the review, and get a quick recap and points on the Xeon Gold 6154 Processor.

Cores: With Intel's move towards a mesh architecture and a reallocation of cache resources, they are now able to better utilize very high core count CPUs. At 18 core and 36 threads, the Intel Xeon Gold 6154 is a beast.

Six-Channel DDR4: With up to 768GB of DRAM per CPU and the ability to run up to six channels, you get the ability to load up close to 2TB of ECC registered memory, and have it work at 2666MHz.

Scalability: Intel actually re-branded the Intel Xeon line to Intel Xeon Scalable Processors, and the Intel Gold 6154 can scale up to 4 CPU systems, which is quite intense and packed with power density.

Omni-Band: The version of our CPU did not support built in 100Gbit Omni-Path in the CPU, but that feature exists on Skylake-F Xeons and can be an easy and effective mechanism to hook up your CPU to a 100Gbit network.

Price: The Xeon Gold 6154 Processor is said to cost around $3540 each, which is over $7K for both the CPUs here. Looking at performance, it doesn't perfectly scale with price.

High power consumption is merited with two 200W TDP CPUs, but teaming that up with price really shows the part of the CPU that lacks. Cost of ownership is very high, but so is performance in a wide variety of applications.

Its performance is made possible with 18Cores and 36 threads on each CPU, the ability to scale to four CPUs, and the high base and Turbo clocks compared to other enterprise hardware. Overall, Intel's new Skylake based Xeons are beasts, but beasts with very high costs. These CPUs are not for the budget user nor the penny pincher, but they offer very high performance. 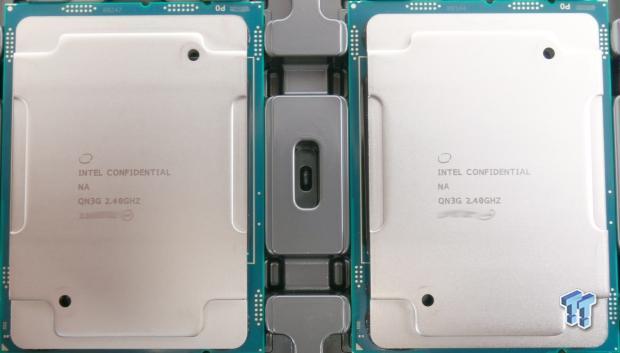 The Bottom Line: Packing in 18 cores and 36 threads into a CPU with a 200W CPU and the ability to scale up, results in excellent performance from the Intel Xeon Gold 6154.