The AC86U is a fantastic solution from ASUS offering consumers an extremely powerful platform with a plethora of advanced features.

ASUS has been at the top of the networking market from day one. When they launched their 802.11n lineup, I had the opportunity at that time to review the "Dark Knight" or RT-N66U, I loved that router and only replaced it after the launch of 802.11ac. Today, ASUS has hundreds of routers under their belt and a router for every situation or use case.

For those of you that need raw power to handle tons of wired and wireless devices, the RT-AC5300 or ROG Rapture fits the bill. If you need modest internet over a large estate, Lyra can easily take care of your needs but for most of us a simple single node platform does the trick and late last year, ASUS announced and launched the latest, RT-AC86U.

This latest platform from ASUS has a lot going for it. Its built on the new AiMesh firmware platform allowing you to pair multiple routers together to create a customized "Mesh" Network.

At the heart this platform it offers 750Mbps on the 2.4GHz band and 2167Mbps on the 5GHz band, both bands supporting 1024QAM. To get this signal in and out, the RT-AC86U uses three external antennas, all detachable with SMA connections and one internal antenna rated at 3dBi. 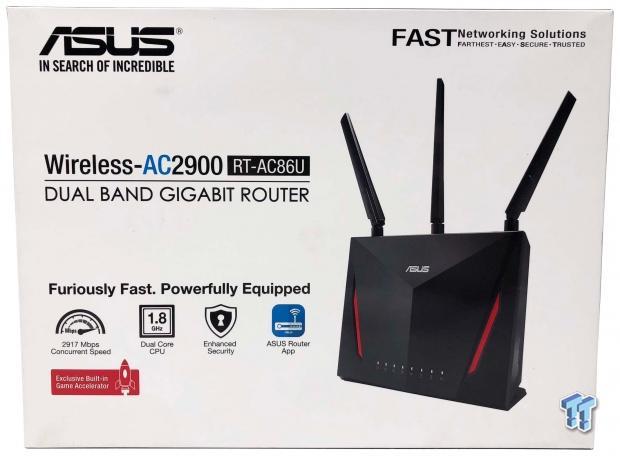 Packaging takes on a new modern look with the 86U. We have marketing information to the left side and an image of the router to the right.

The spine of the box gives a full specifications list including its wired and wireless performance characteristics. 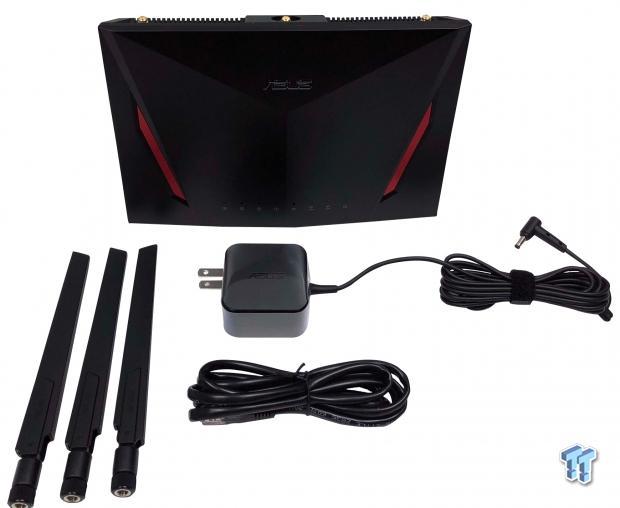 Included in the box, we have the router, three antennas, power adapter and Ethernet cable. 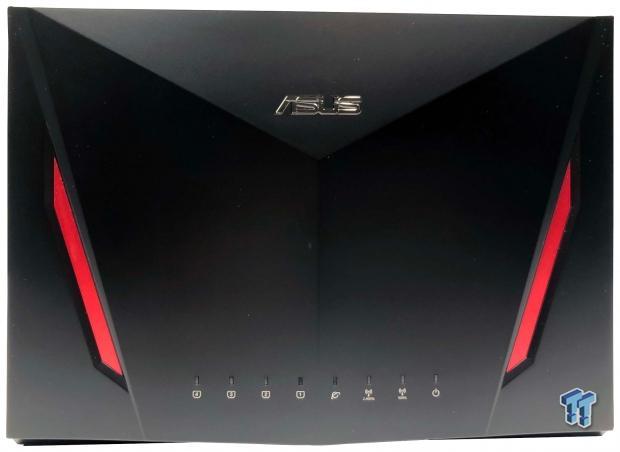 On the front of the router, we have the black and red ROG styling carried over. A series of LEDs along the bottom denote everything from power to activity across each band and internet connectivity. 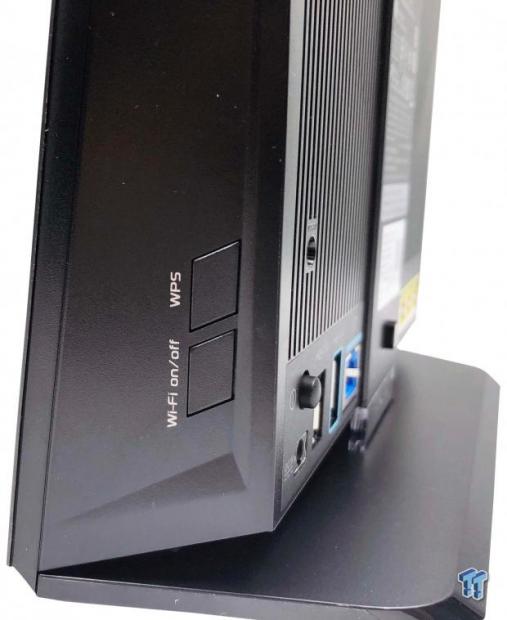 The right side of the router houses a Wi-Fi on/off button and WPS button. 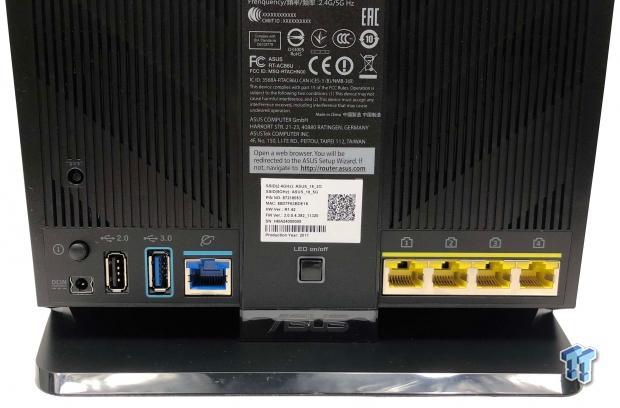 On the backside, the top left is a small reset button. Below this, we have the power input and switch above followed by USB 2.0 and 3.0 and WAN in blue. The four Gigabit LAN ports are colored yellow with a LED switch in between. 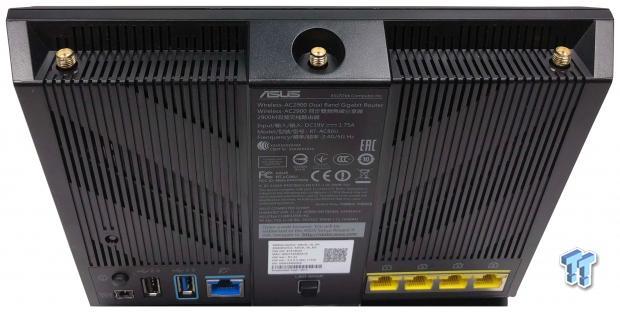 The top of the router houses all three antenna connections. 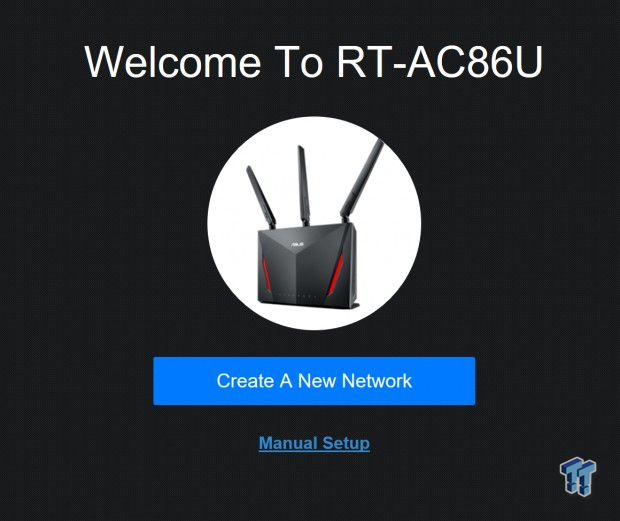 Setup starts with the screen above. From here you can choose the wizard with the "create a network" or choose manual setup below. 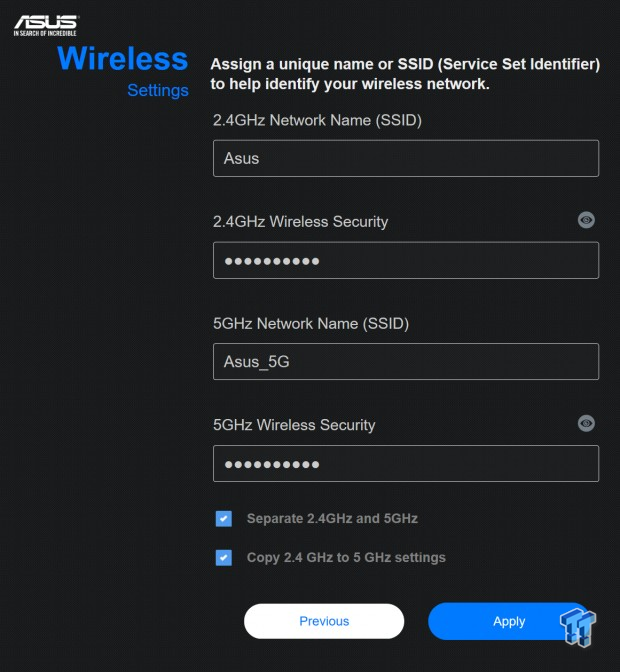 Choosing the wizard, we start by naming each SSID and giving them a password. 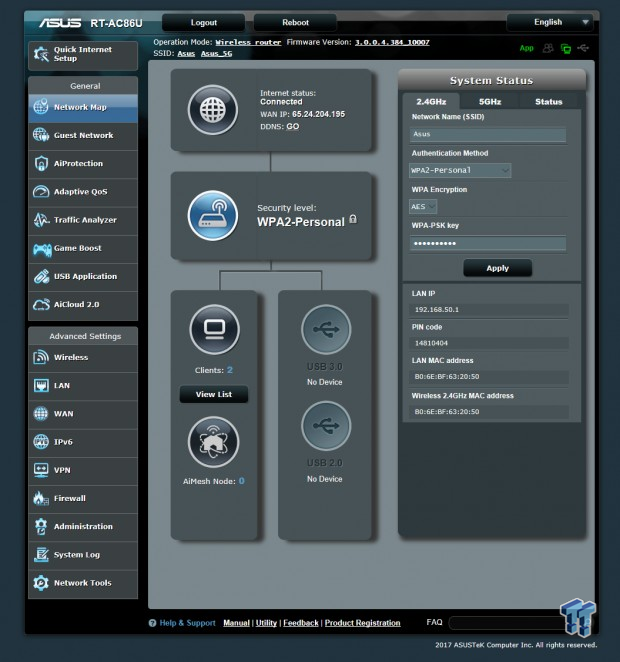 The dashboard should be extremely similar for anyone that has used ASUS routers in the past. We have a quick overview with client list and USB devices at the bottom and system status to the right. 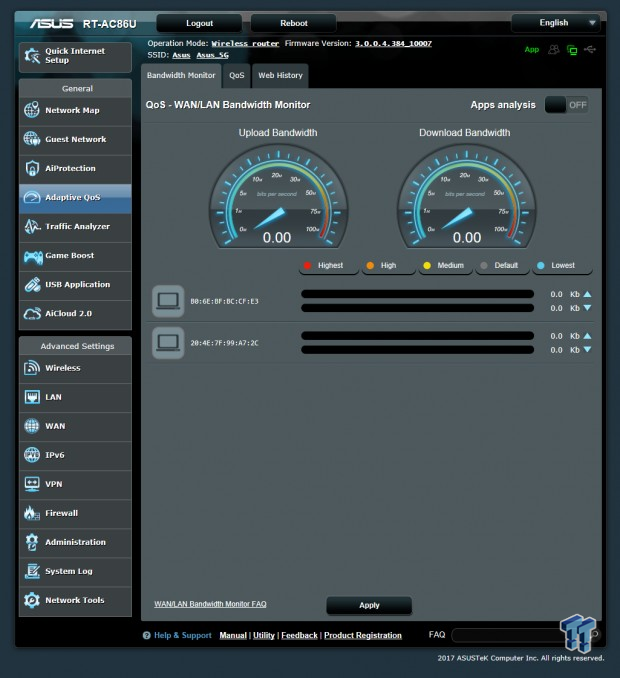 One of the more unique features of the ASUS platform is its QoS system, which in my own experience is fantastic. I used this router for more than two months and even though I stream and game on multiple devices at once I never once had a hiccup. 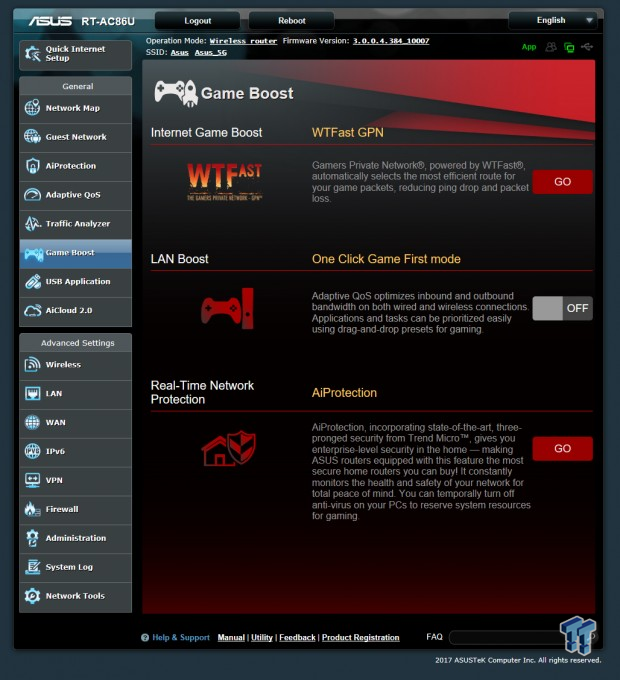 Gaming features include WTFast GPN, LAN boost along with AiProtection which is a built-in security feature powered by Trend Micro. 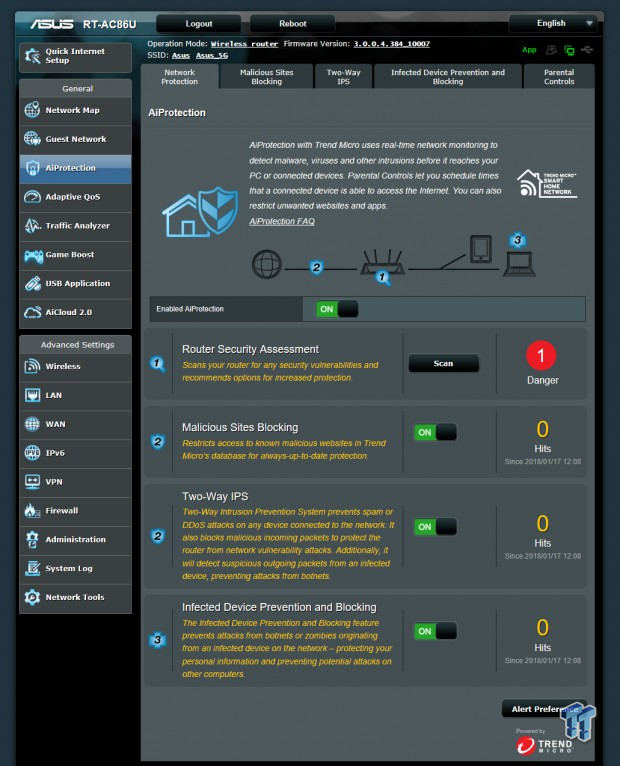 Above, we have the AiProtection menu which can run an assessment on the router to make sure settings are secure. It also watches for malicious content and network intrusions. 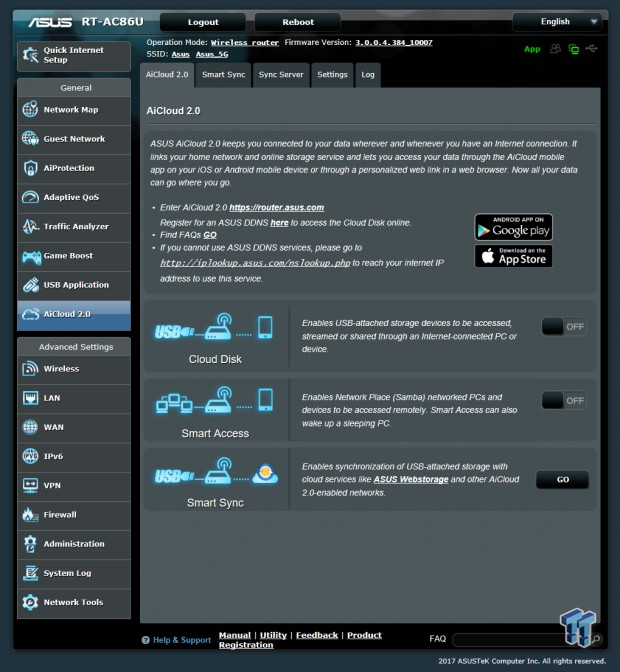 AiCloud takes USB 3.0 storage to the cloud allowing you access your stored data on the go. 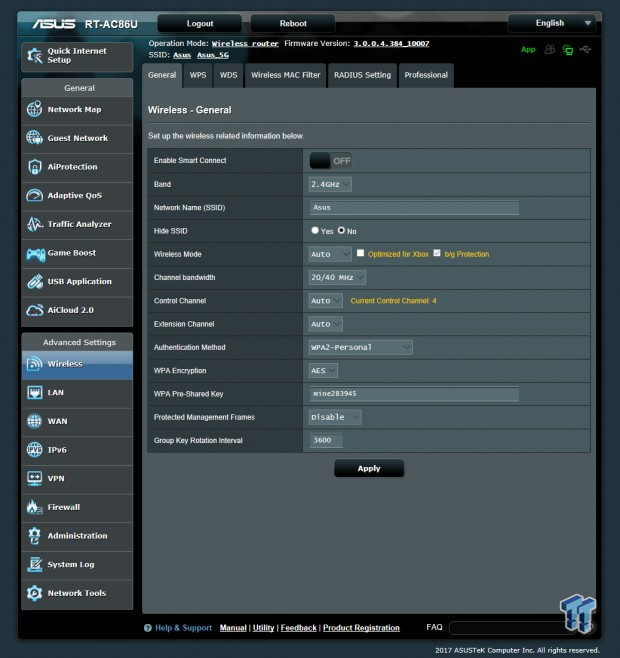 Diving into the wireless menu, we have controls for each band within one menu. The drop-down box at the top switches between these bands and below we have options for wireless mode and channel width. 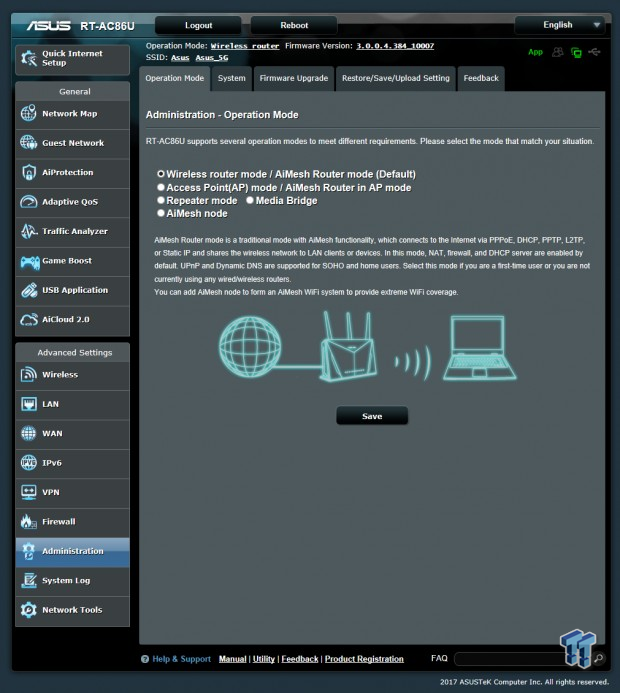 The administration tab allows you to switch this unit from a router to an AP, repeater or Media bridge. You can also switch a router to be a AiMesh node from this menu. 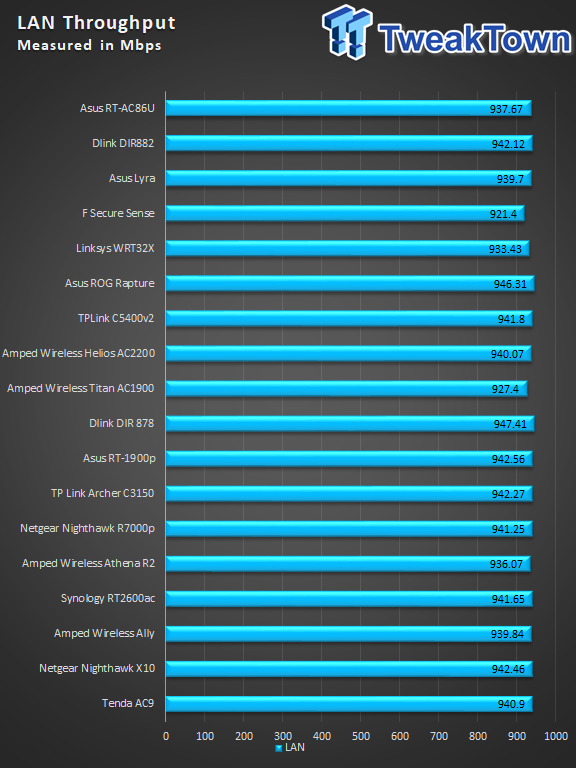 To start off testing, we hit wired throughput where I found the 86U to reach 937Mbps. 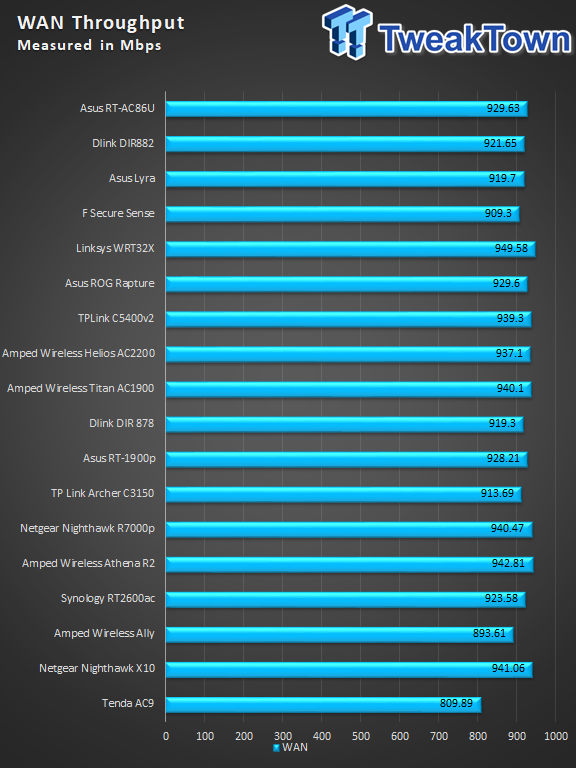 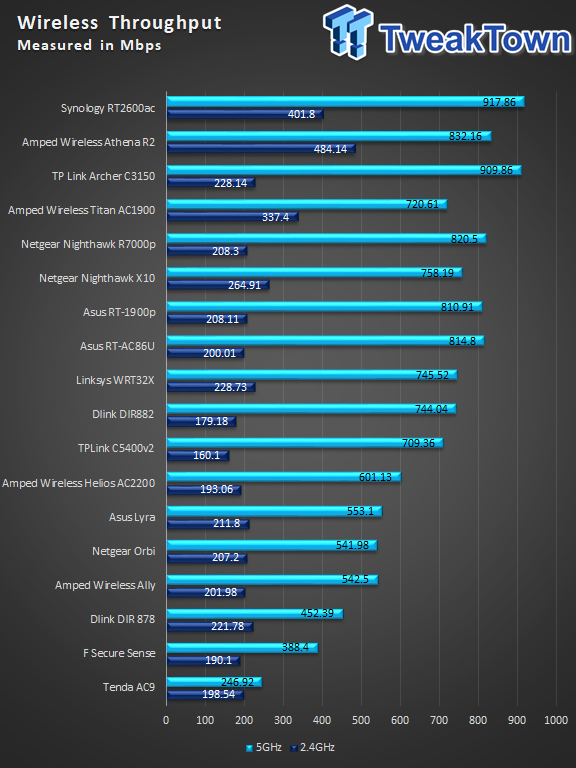 Wireless testing started off with 2.4GHz where the ASUS produced 200Mbps. Switching to 5GHz, we saw a solid increase to 814Mbps. 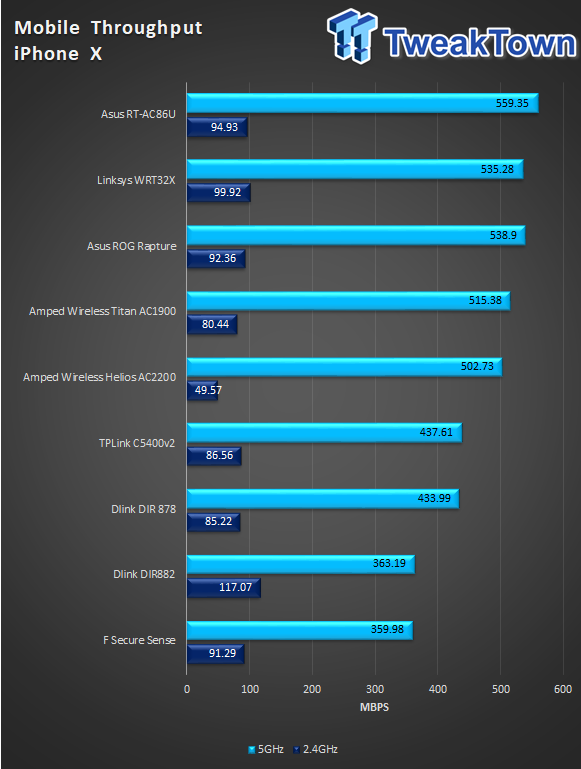 Mobile throughput using our new iPhone X, reached a peak of 559Mbps on 5GHz and 94Mbps with 2.4GHz. 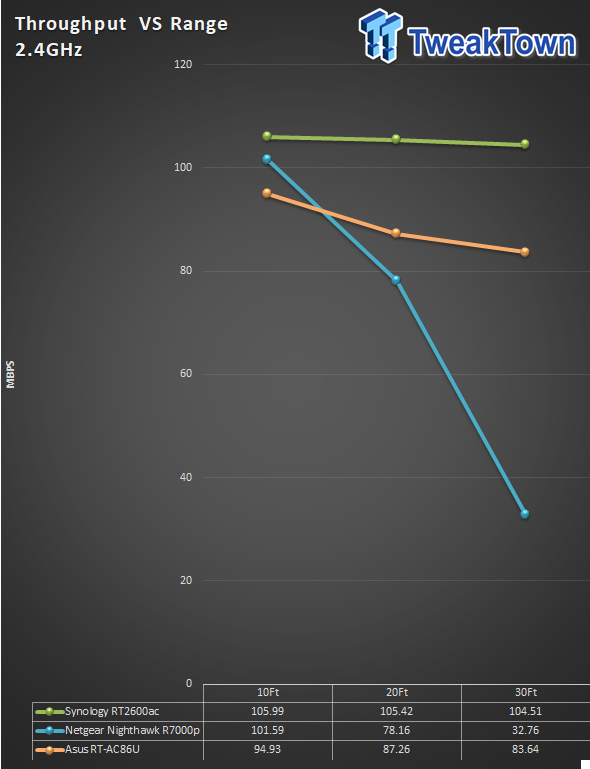 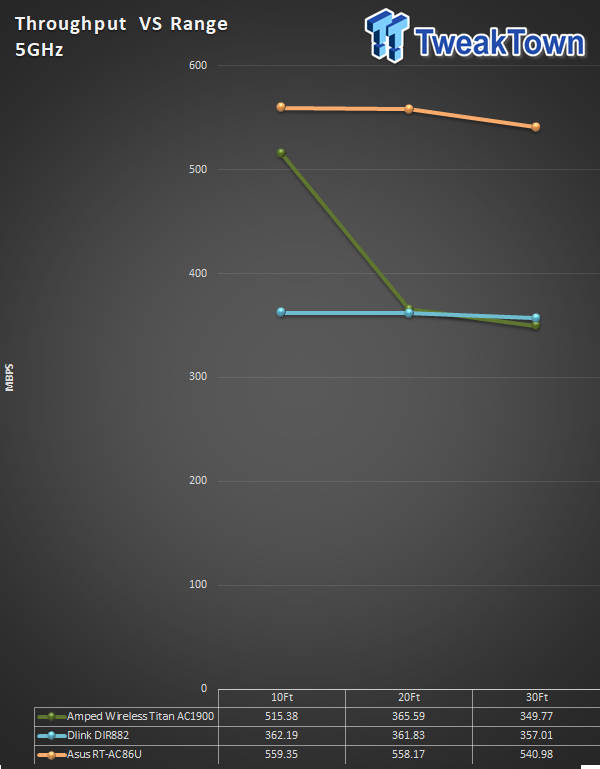 With 5GHz, we start at 559Mbps at 10Ft and moving out to 30Ft very little drop in performance ending at 540Mbps. 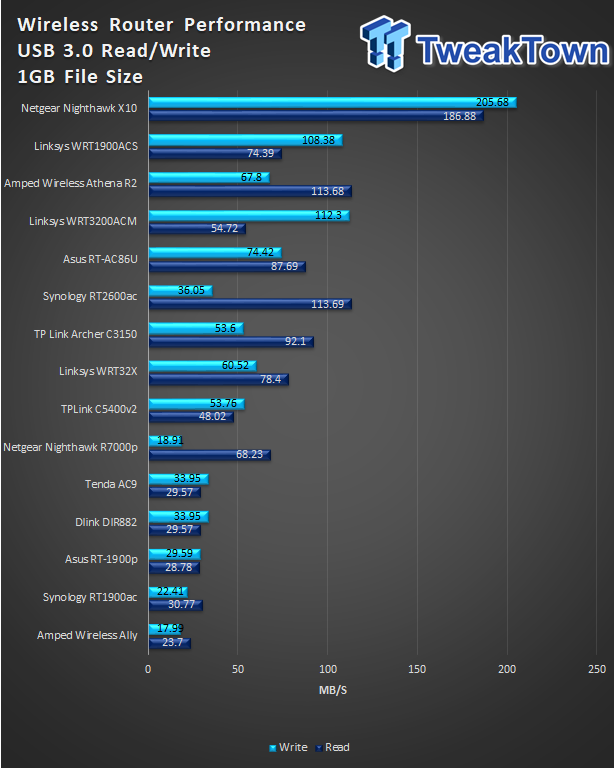 For file transfer testing, I use my SanDisk Extreme Pro USB 3.0 flash drive. Its formatted with the exFAT file system. The 86U was the 5th quickest solution in our modern charts coming in at 87 MB/s read and 78 MB/s write. 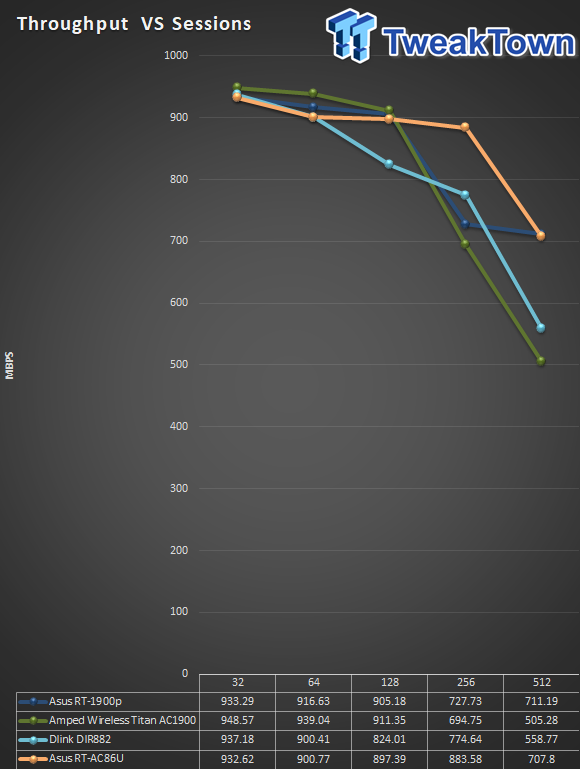 Looking at this chart, the 86U in orange was among the best routers I have seen at handling large amounts of connections. We started with 932Mbps with 32 pairs and all the way out to 256 we lost very little throughput. We ended testing at 512 connections at 707Mbps seconds to the AC-1900p by 4Mbps.

ASUS has a gem of a router with the RT-AC86U, like I mentioned earlier in the article I used this solution for nearly two months in my home network and it's perhaps the most solid platform I've ever used.

To me that says a lot, because every solution that you see reviewed here does go through at least two weeks as my main home network router. I do this to get a feel for how these solutions perform on a daily basis and sometimes to help the vendors iron out any quirks they may have.

That said the ASUS enjoys solid build quality as do many of their platforms, with durable plastics and of course the "gamer" red and black theme from their ROG lineup. The only downfall of the 86U is its vertical only orientation, there is no option to wall mount or remove the base to lay it horizontally on a desk.

The performance was great for the 86U, we have top-notch wired throughput with Lan to Lan and WAN. Wireless performance had this unit top 10 for 2.4GHz and top five for 5GHz performance. With our mobile device, we reached the highest 5GHz throughput we have seen at 559Mbps on the 5GHz band.

Range testing showed average performance for the 2.4GHz band losing 10Mbps going from 10 to 30Ft from the router while 5GHz was rock solid 559Mbps at 10Ft and 540Mbps at 30Ft.

In closing, for the consumer on a budget that wants a little more than an entry-level router can provide, the ASUS RT-86U is fantastic. To me it's the best mid-range router ASUS has in its current portfolio, it's a solid upgrade for users of the 66 or 68U and it's not overkill like the RT-AC5300 or ROG Rapture.

The Bottom Line: The AC86U is a fantastic solution from ASUS offering consumers an extremely powerful platform with a plethora of advanced features.