The 882 has one goal; to be the best entry-level AC2600 class router available and for my money, Dlink has delivered.

As of late DLink has been filling market gaps in its portfolio, first with its Mesh solution DLink Covr and today we look at a rather low cost AC2600 class solution from the EXO lineup, the DIR-882.

The DIR-882 is built from the same hardware as the DIR-878 and while the 878 was capable of AC2600, DLink had turned a few things off to make it competitive in the AC1900 class market. For the 882, DLink is aiming for a efficient gaming and streaming solution with features like QoS, Advanced Beamforming, and DLNA support. 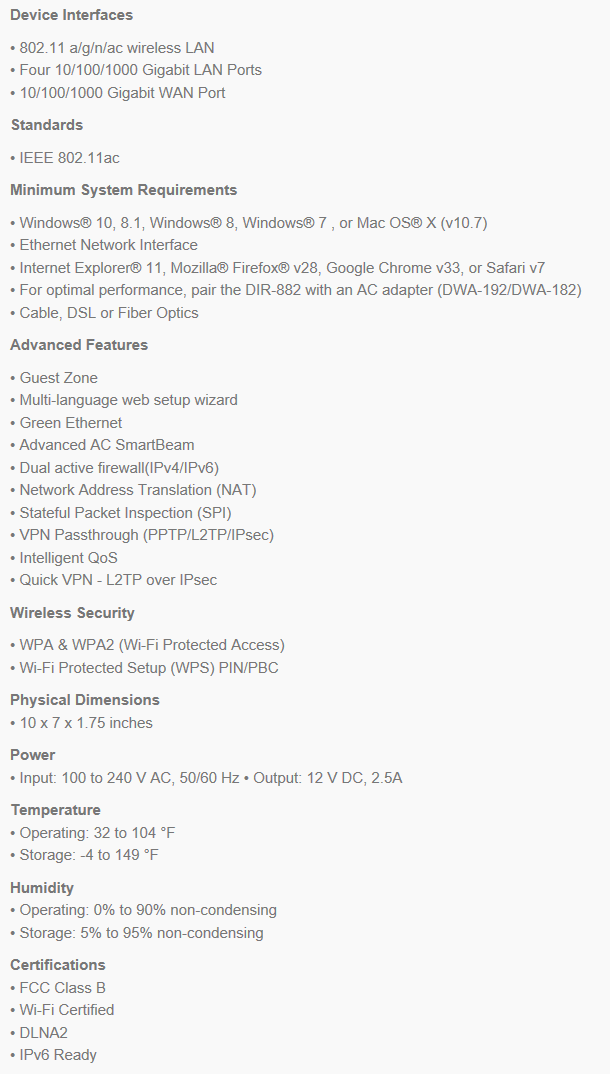 This solution does support and feature USB 3.0 ports for storage while offering dual-band performance of 800Mbps on the 2.4GHz band and 1733Mbps on the 5GHz band. This comes through in a 4x4 configuration supporting both 80 and 160Mhz streams on the 5GHz band

Hardware specifications of the 882 give us a simple look at the setup of the router. For instance, we have support for 802.11agn/ac with four-gigabit ethernet ports and one gigabit WAN port.

Doing a little digging on this solution we found it is a MediaTek platform offering a dual-core 880MHz processor backed by 128MB of memory and 128MB of NAND Flash. The Wi-Fi chipsets are the same for each band in the MediaTek 7615N with the ethernet switch also from MediaTek in the 7621A.

Moving down the list this solution supports WPA and WPA2 along with WPS PIN setup. Its compatible with DLNA 2, IPv6 and is Wi-Fi certified. The MSRP of the DLink DIR 882 comes in at $149.99 with a one-year warranty. 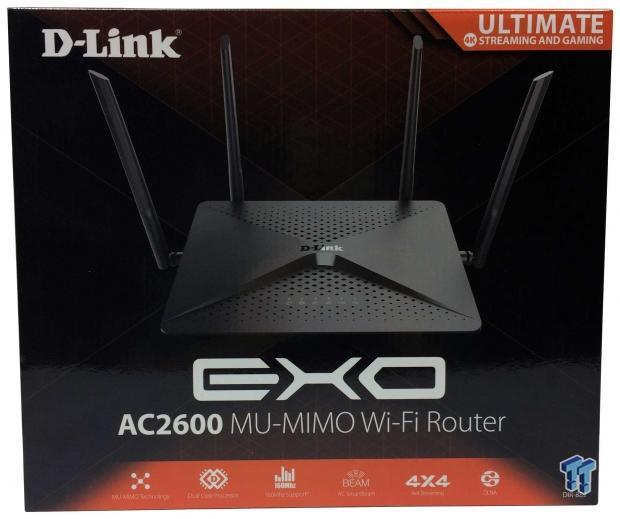 The packaging gives details along the bottom including its 4x4 and 160MHz features. We have a large image of the router above and its place in DLink portfolio at the top right. 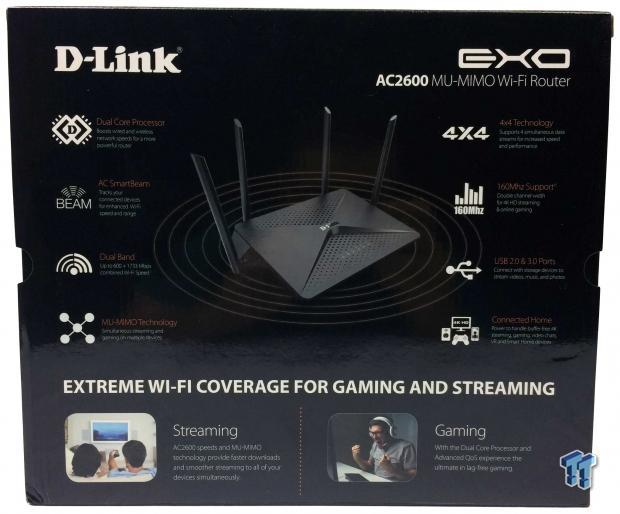 The back side carries more in-depth marketing details. 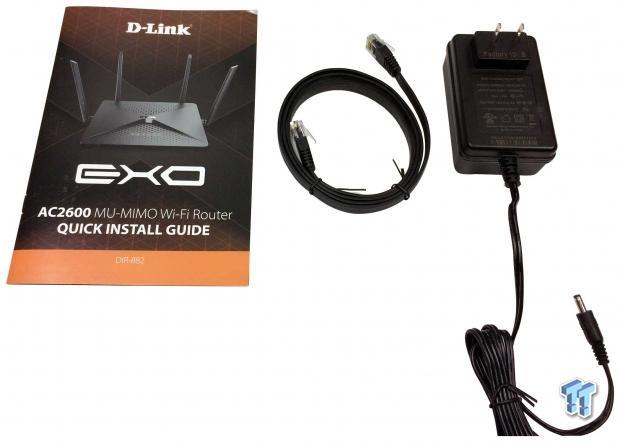 The scope of delivery includes the power adapter, reading materials, and ethernet cable. 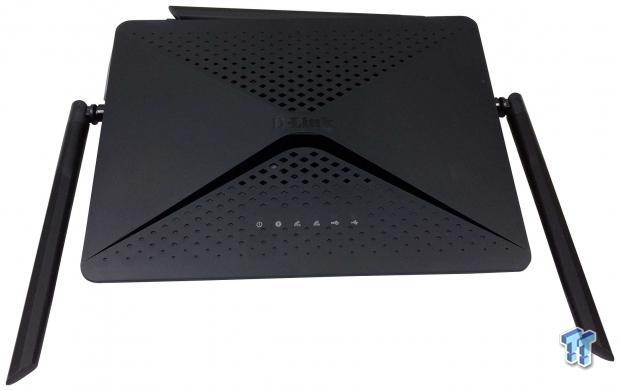 The top of the router has venting to expel any heat from the router along with a set of LED lights for activity. The antenna design is non-removable, but we do have four of them.

The USB 3.0 port is placed on the underside front of the router 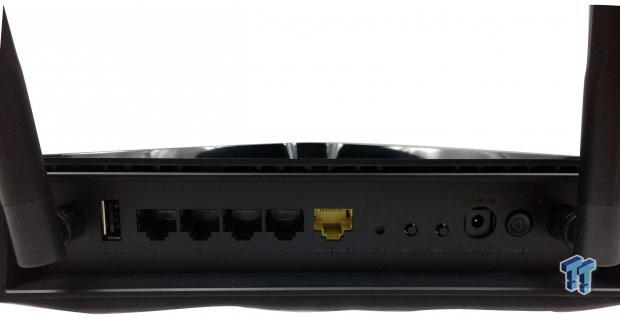 The I/O gives us USB 2.0 followed by four-gigabit ethernet ports and a single WAN in yellow. This is followed by a reset, WPS, and Wi-Fi on/off and the power input. 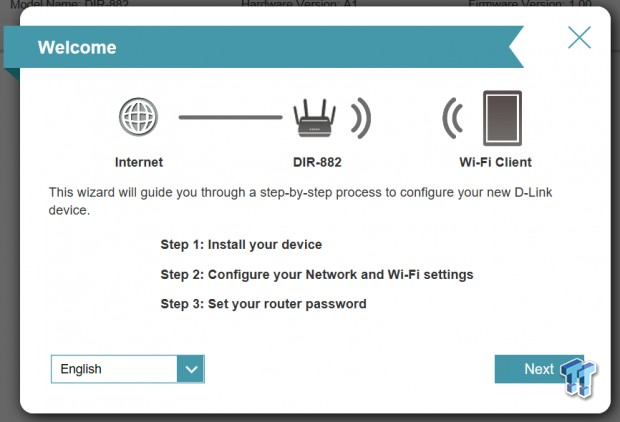 Setup is the same on the 882 as past DLink solutions. 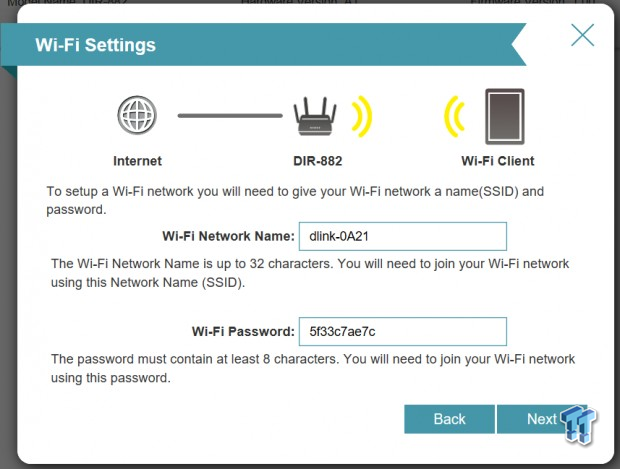 To complete setup we push through the wizard setting up admin username and password along with SSID and passwords. 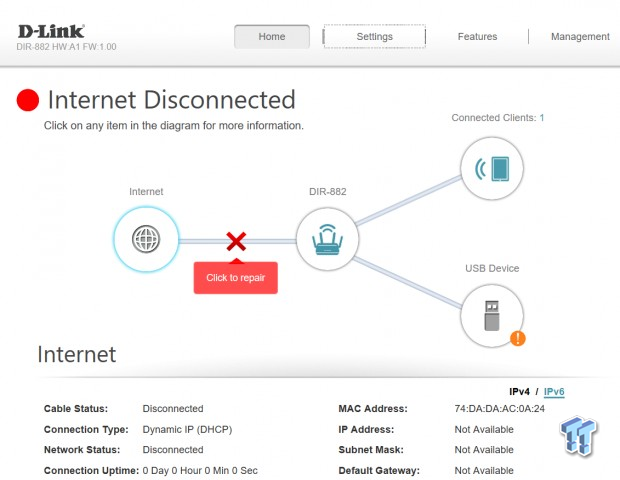 The dashboard gives a quick look at whats going on with the 882. At the bottom, we have detailed status of your internet connection while up top we have connected clients and USB devices listed. 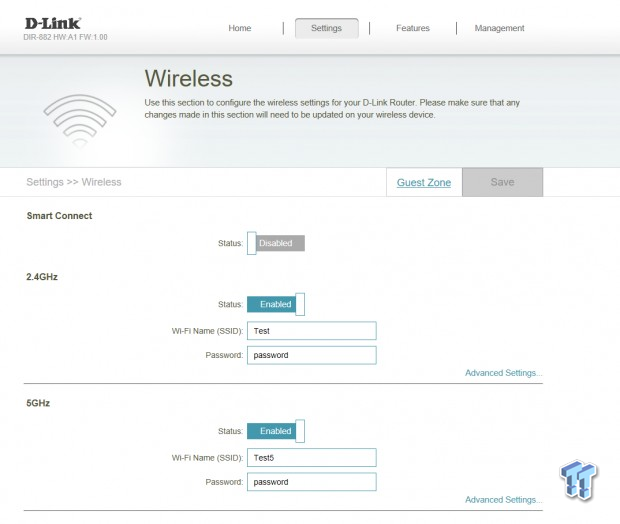 This router does support smart connect if you want to run a single SSID and let the router sort things out. You can also go old school and do it all yourself with advanced settings. 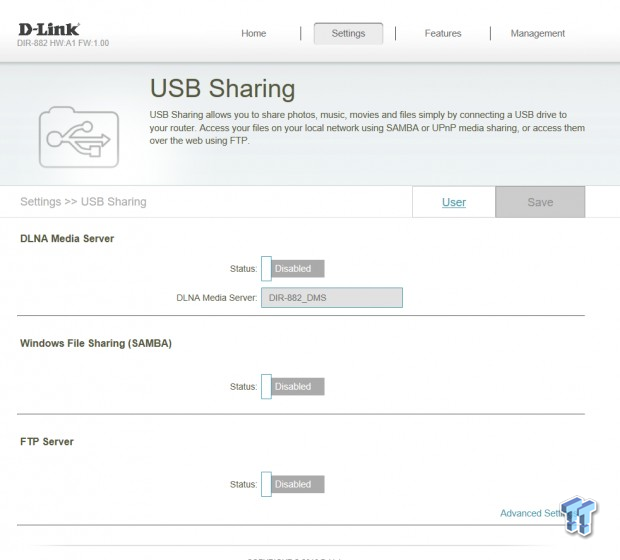 The sharing menu allows access to USB devices through DLNA, SAMBA, and FTP. 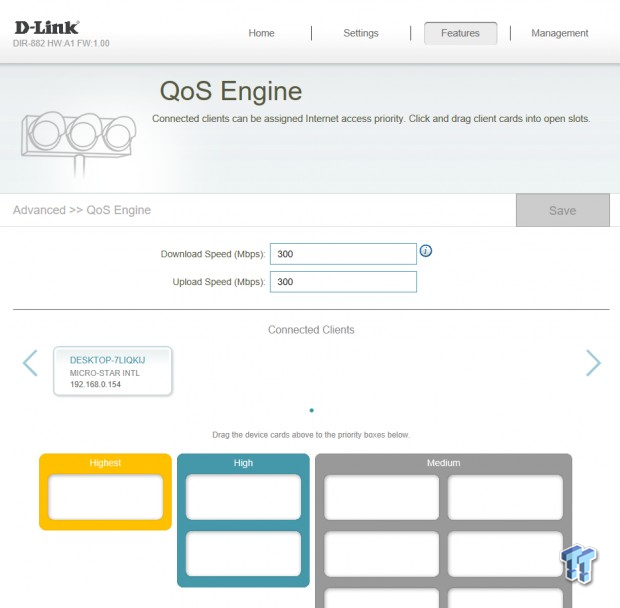 The QoS engine is one of the easier platforms to configure with simple drag and drop actions to each category and manually entering your internet throughput at the top. 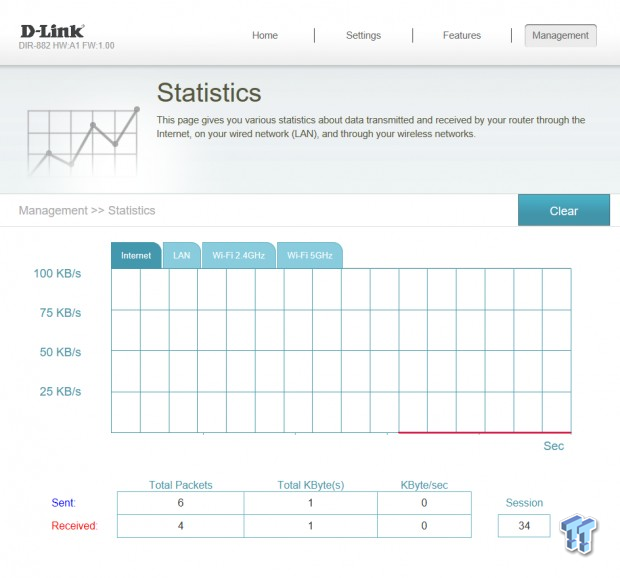 DLink is also one of the only platforms to offer a nerdy side on its platform, allowing you to look at statistics of your router traffic and performance. 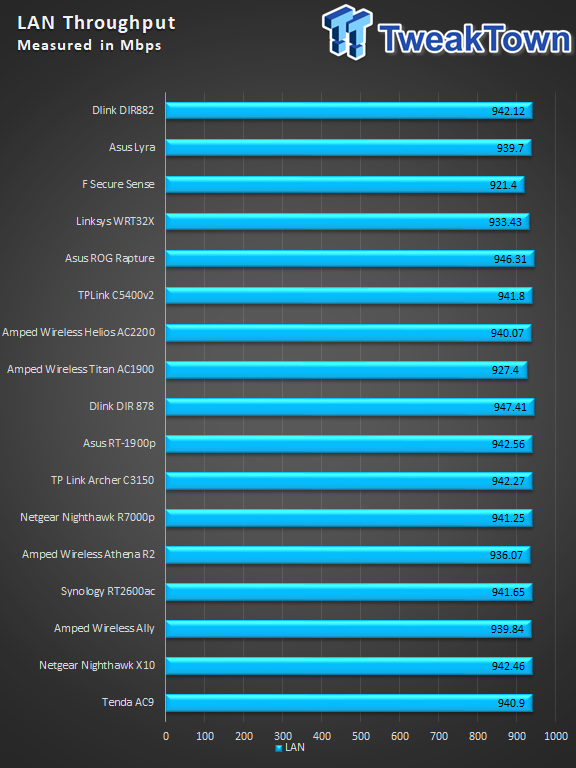 The 882 was one of the most surprising platforms of 2017, offering top-tier throughput on the gigabit connections at 942Mbps. 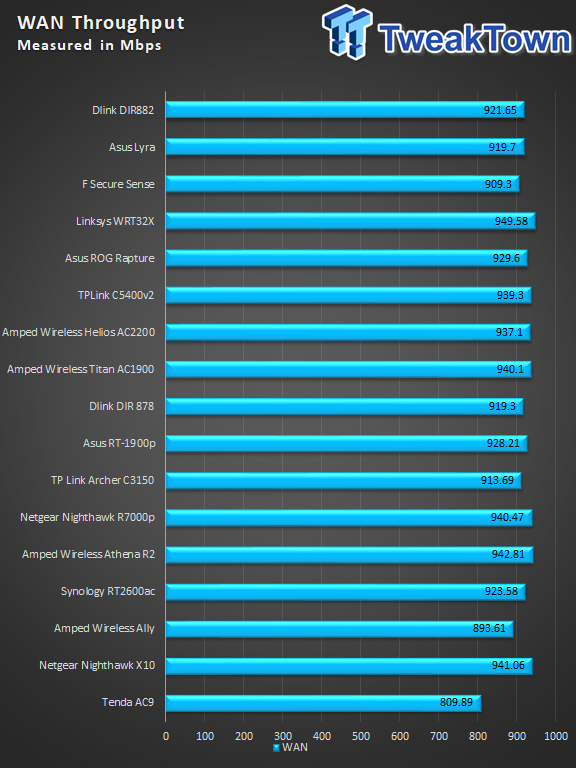 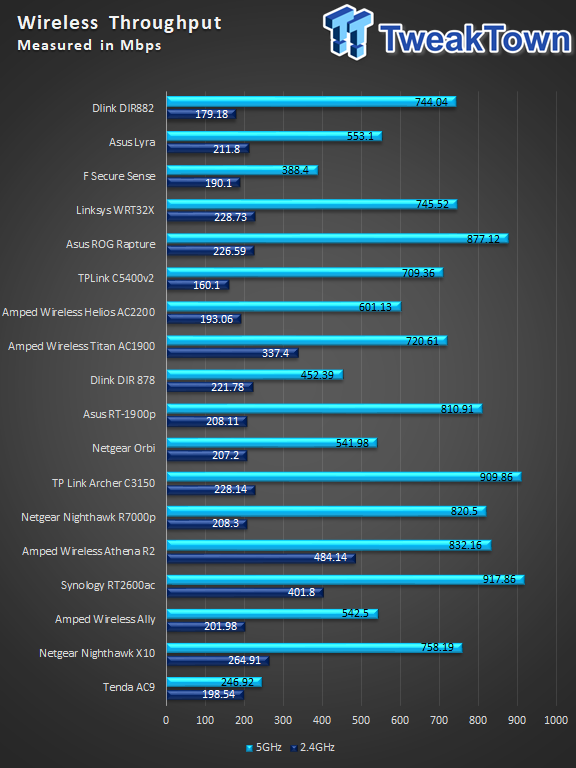 2.4GHz reached 179.18Mbps for the 882 slightly below average for all the platforms we have tested. At the same time, it pushed out a nice 744Mbps on the 5GHz band which is number seven on our list and just as quick as the WRT32x. 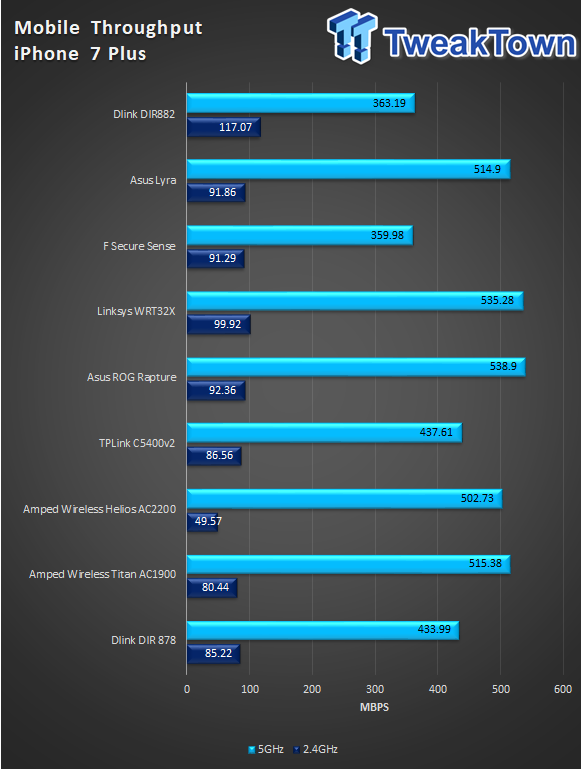 Our next test for this new setup is seeing how range affects performance. With this, we start at 10Ft and move out to 30Ft. Routers are tested in their default configuration for this part, the client device is the iPhone 7 Plus. 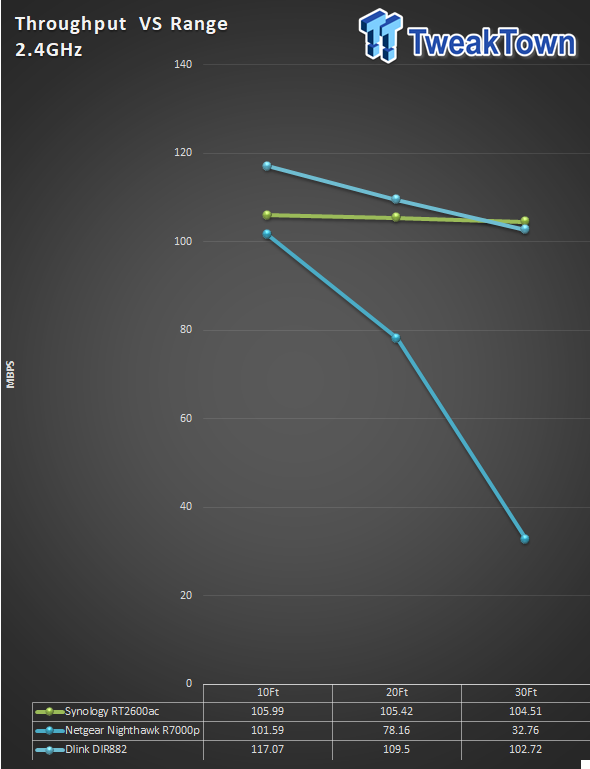 The Synology RT2600ac has been our best AC2600 class router all year long and the DIR-882 puts that to the test holding solid 2.4GHz performance from 10 through 30ft. As you can see in the chart the 882 started at 117Mbps and ends at 102Mbps, 2Mbps slower than the Synology. 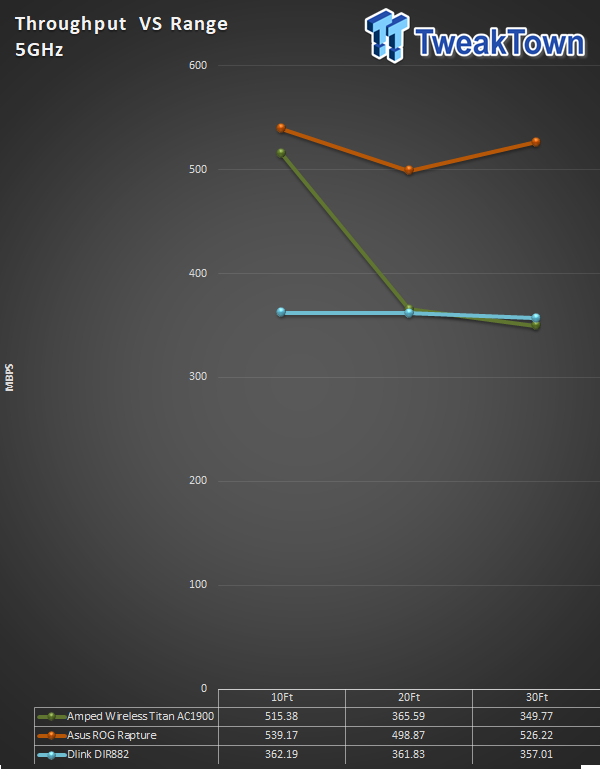 For 5GHz the ASUS ROG Rapture has been the best at carrying its performance over distance while the Amped Titan has been the solution to lose the most performance from 10 to 30ft. The 882 doesn't fall into either category but rather is quite stable with its performance, starting at 362Mbps and ending at 357Mbps. 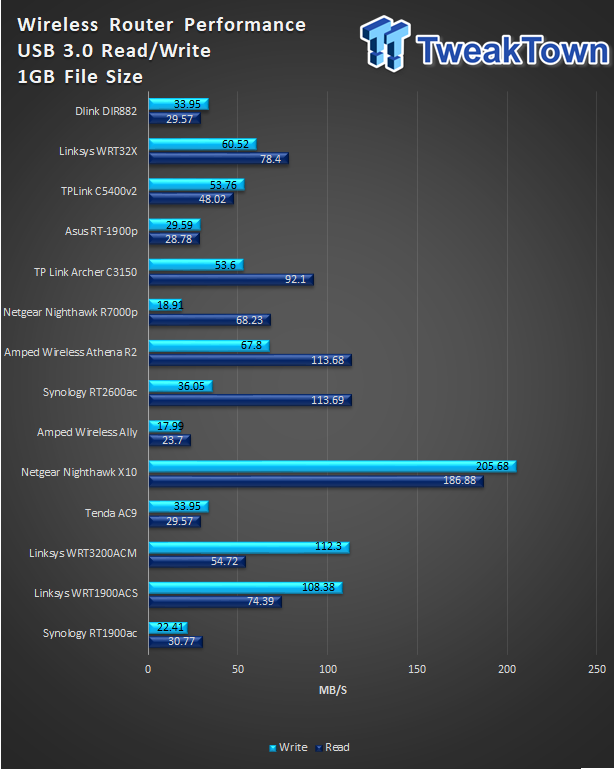 It has been a little bit since we last tested a DLink solution and it was good to see what they have been up to. With that said, its quite apparent with the 882 that build quality wasn't the number one goal.

The enclosure of the router feels hollow and plastics are very cheap. The antennas aren't removable leaving room for potential breakage without a way to replace or upgrade.

On the other hand, the 882 has it where it counts and that's performance. The gigabit ports are pushing through at wired speeds and the WAN port isn't holding anything back for those of you with legit broadband connections.

The wireless performance rivals that of much higher-end routers and to be honest, there only a few routers we have tested that offered higher 5GHz performance. In range testing the router wasn't the quickest but it was able to hold its performance through 30ft for both 2.4 and 5GHz testing thanks to the high gain antennas.

The firmware OS is one of the cleaner solutions on the market with simple menus to navigate while still offering the mild enthusiast enough features to play with.

With that, this isn't going to be a router you want for storage as the USB 3.0 ports are atrocious in terms of performance but this solution does offer and represent one of the best bangs for your buck on the current market.

The Bottom Line: The 882 has one goal; to be the best entry-level AC2600 class router available and for my money, Dlink has delivered.