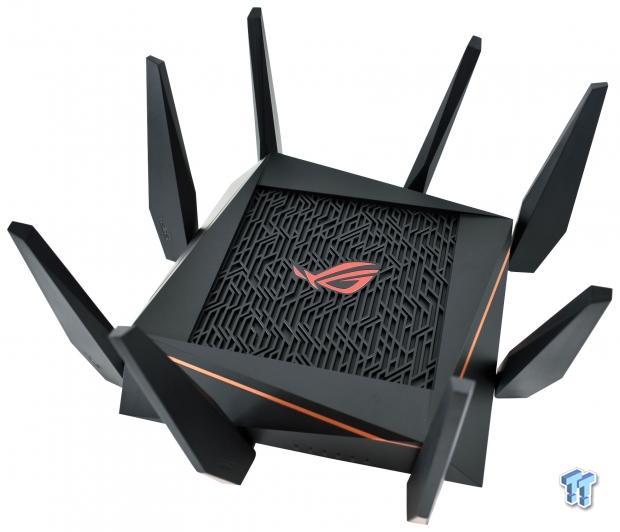 There is no doubt ASUS went all in on its Republic of Gamers brand many years ago. Today they push that brand into the consumer networking segment with a complete redesign of their RT-AC5300. This redesign is more than just a badge swap on a chassis though as ASUS has tailored the firmware for gaming with aggressive QoS profiles and Ethernet ports specifically setup for gaming and port aggregation.

This transition from consumer platform to gaming router does go even deeper. The RT-AC5300 launched early 2016 with a Broadcom BCM4709 dual-core SoC operating at 1.4GHz and paired with 512MB of memory and 128MB of NAND flash. It had three BCM4366 radios to support its two 5GHz bands and single 2.4GHz band. The GT-AC5300 or ROG Rapture, on the other hand, has been updated to include the Broadcom BCM4908, a quad-core SoC operating at 1.8GHz paired with 256MB of NAND flash and 1GB of RAM.

The radios too have been updated to BCM4366E with the same configuration as the RT-AC5300. That configuration gives us a single 2.4GHz band capable of 1Gbps via 1024QAM and two 5GHz bands bring in 2.16Gbps with 1024QAM.

The antenna configuration gives us two on each face of the router for a total of eight antennas. The wired configuration for this solution is one of the most populated we have seen in a consumer platform with a single Gigabit WAN and eight Gigabit LAN ports. 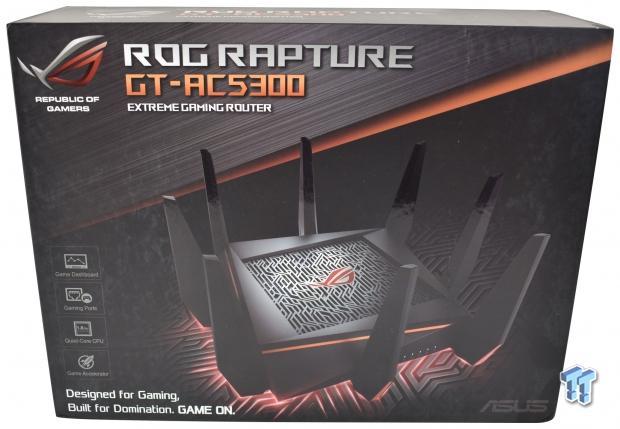 Packaging for the Rapture has the ROG branding top left with a rather small amount of marketing bottom left. 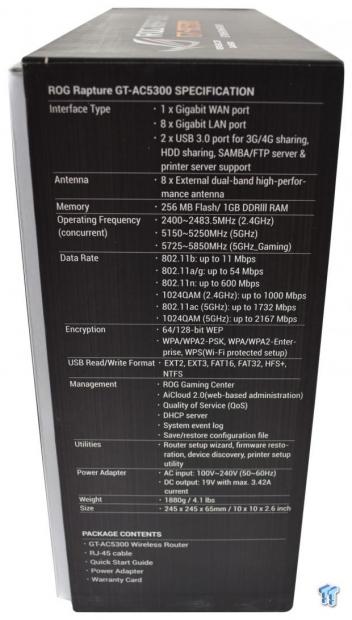 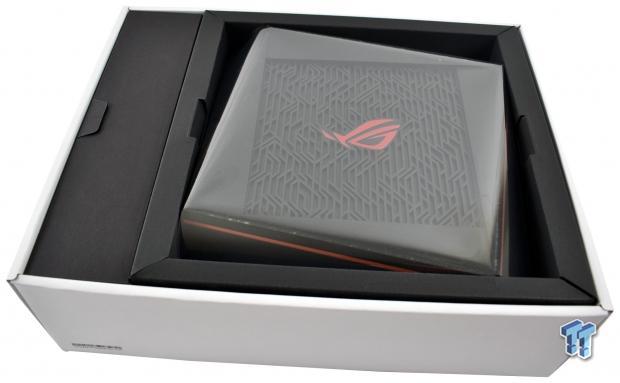 Opening the box, we have our first look at the Rapture 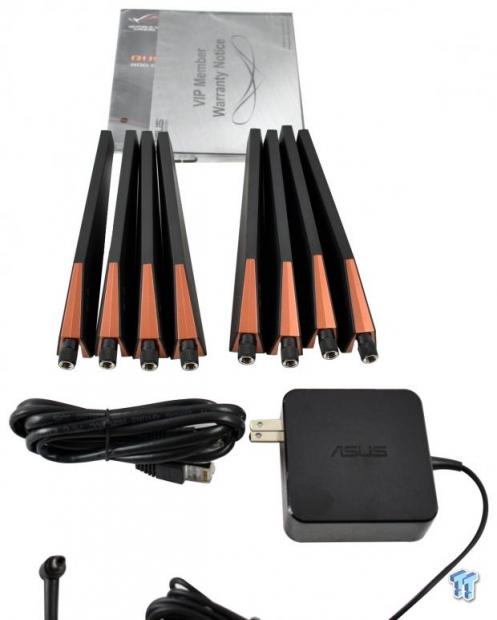 The scope of delivery includes all eight antennas, power adapter, and ethernet cable. 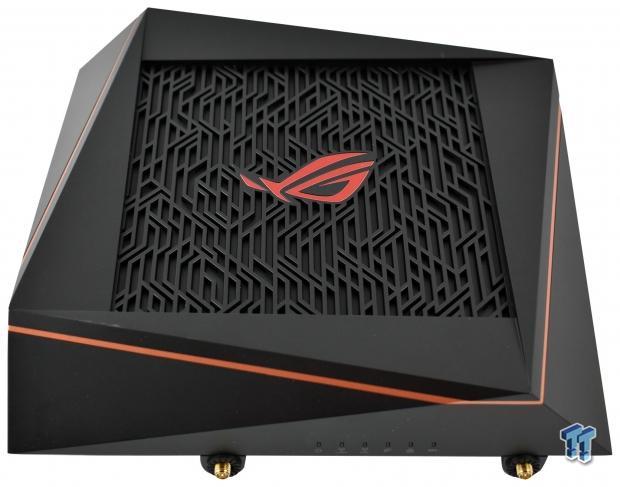 The router itself shares the chassis from the RT-AC5300. The top logo has been swapped of course to the ROG branding.

The backside is all business with power entering on the left side followed by dual USB 3.0 ports and a host of Gigabit LAN ports. 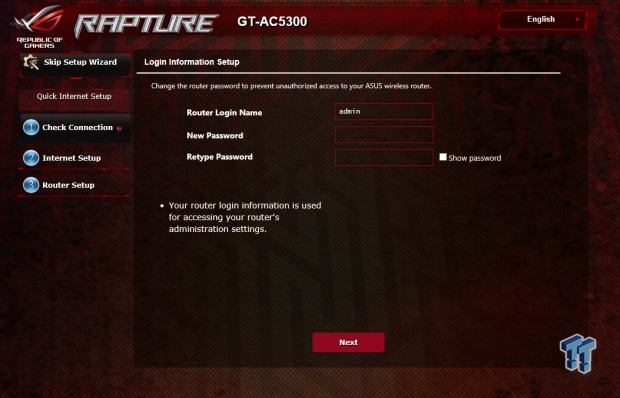 A good amount is going on with this router interface, but we start with the setup wizard. For the Rapture, it's a three step installation process. 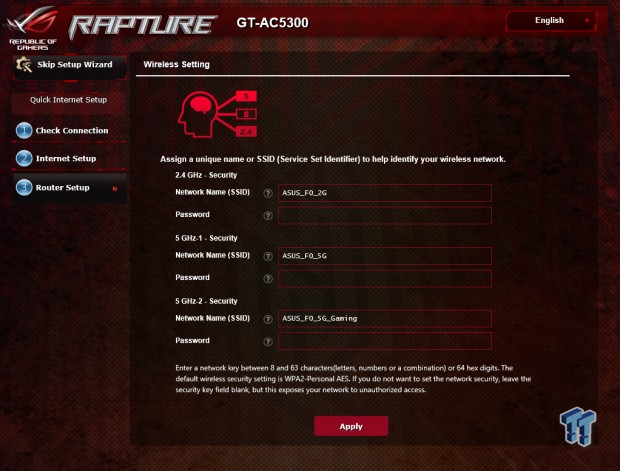 The second step lets you choose your SSIDs for all three bands along with passwords. 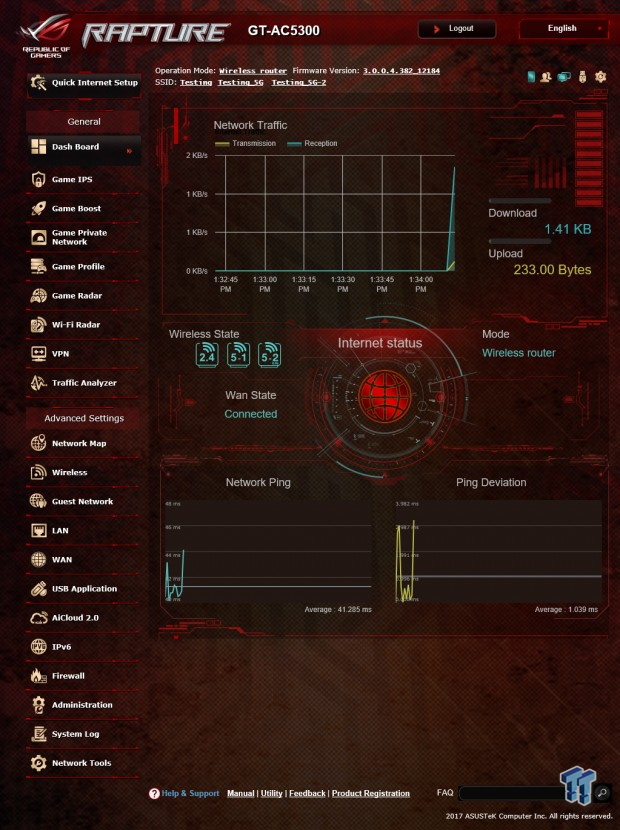 Diving into the dashboard, it's quite apparent this is a full-on ROG solution. Nothing was held back with the left side menu having a ton of options. 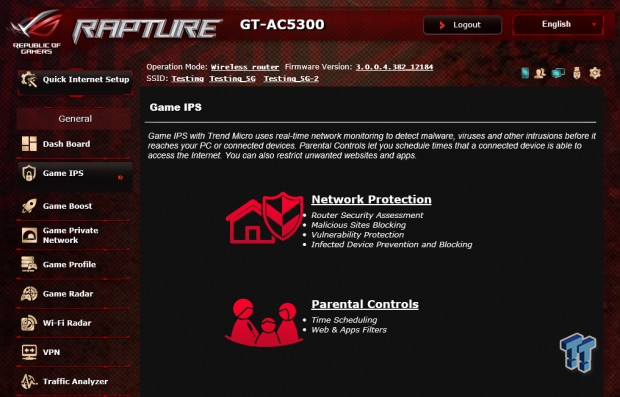 Game IPS is a feature ASUS has implemented using Trend Micro security to detect malicious content on the network - it includes parental control too. 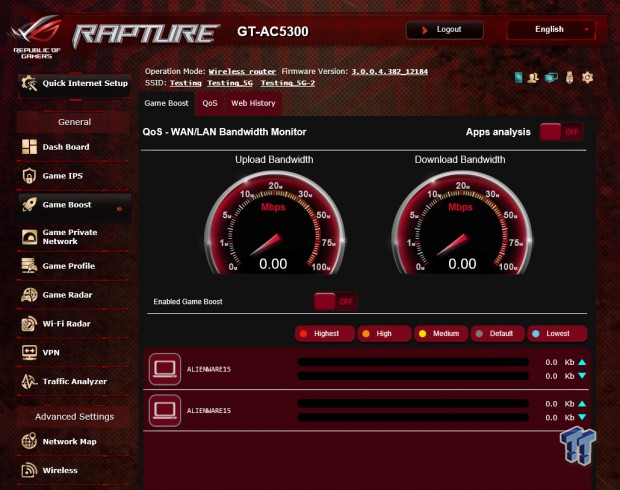 Game Boost is part of the QoS platform for the Rapture. You can set priority based on the machine along with app analysis. 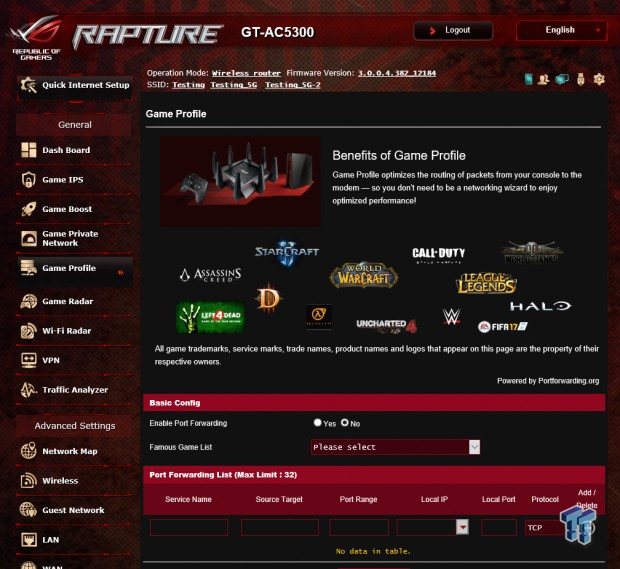 Game Profiles let you choose the game you are running allowing the router to forward all the correct ports to your PC for optimized experiences. 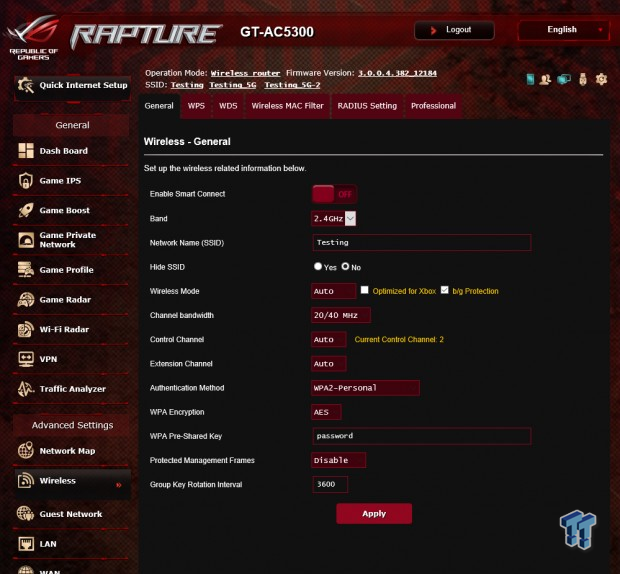 On to some standard features, the wireless menu gives you access to all the control for your three bands. At the top, you can enable Smart Connect to turn on band steering letting the router manage wireless connections. 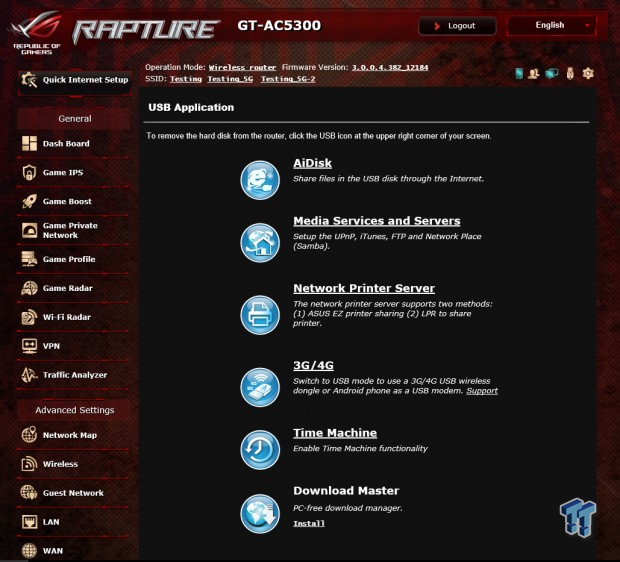 USB applications have long been a staple of ASUS routers, and the Rapture is no different in that regard. We have AiDisk for storage along with media servers and printer servers. 3G and 4G USB modems are available options along with macOS Time Machine and download master. 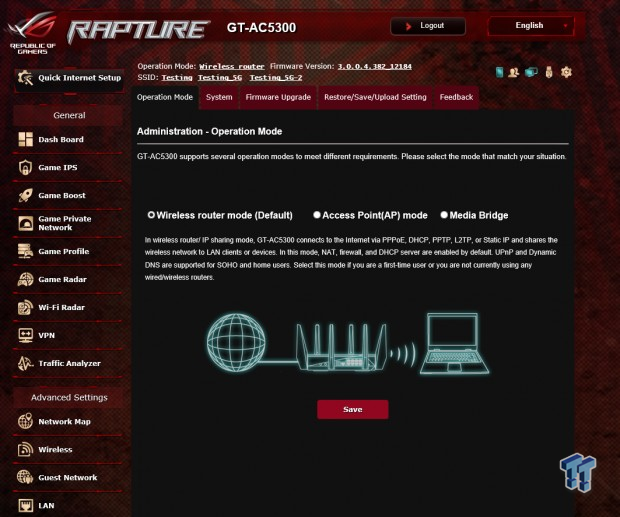 Last but not least, we have operation modes that allow you to turn the Rapture into an AP or media bridge. 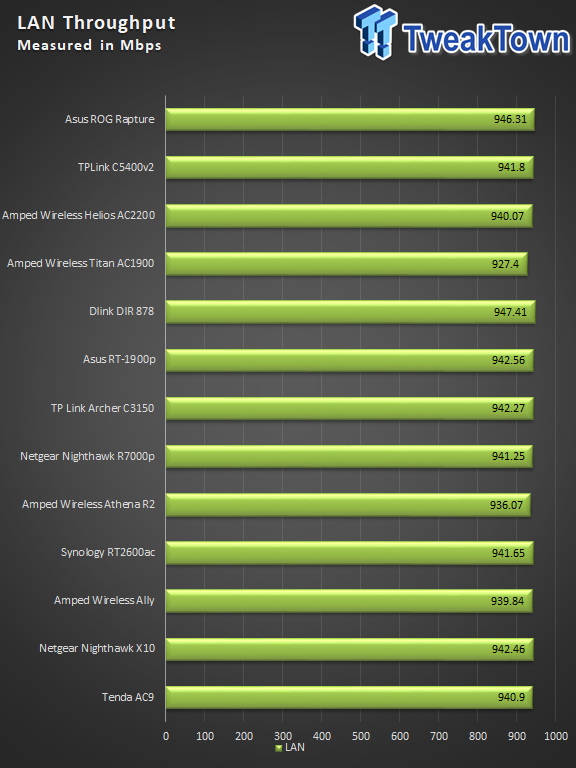 LAN throughput was top notch - 946 Mbps for the ROG Rapture. 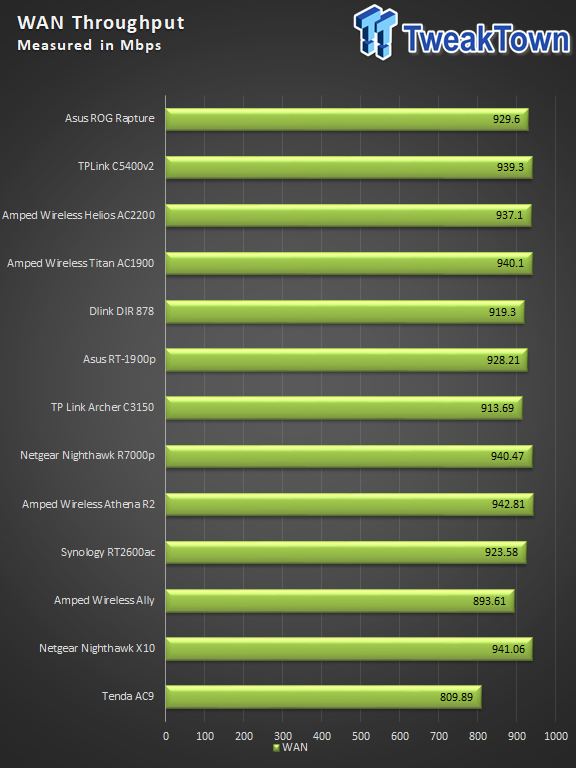 Moving over to WAN throughput, without QoS enabled, I pulled 929 Mbps through ROG Rapture. 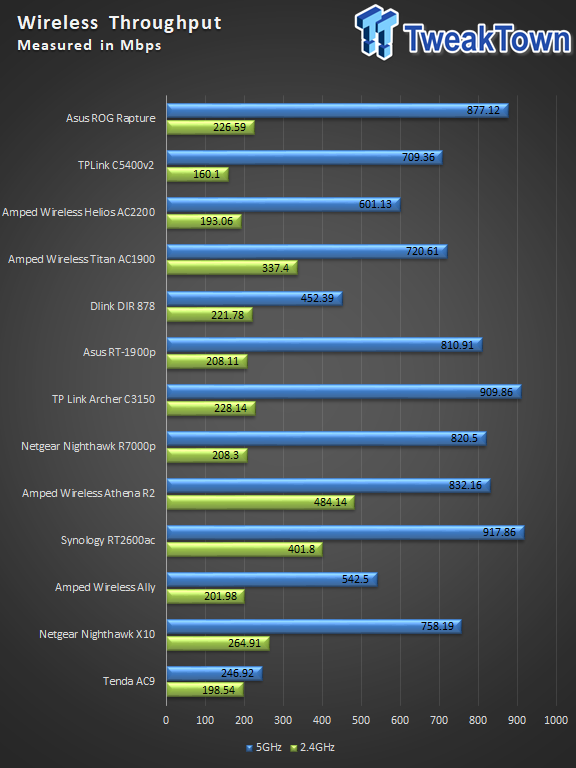 2.4GHz performance reached a peak of 226.5 Mbps which seems to be about average on our test platform. 5GHz nearly allowed the Rapture to become the quickest we have tested but ended at 877 Mbps. 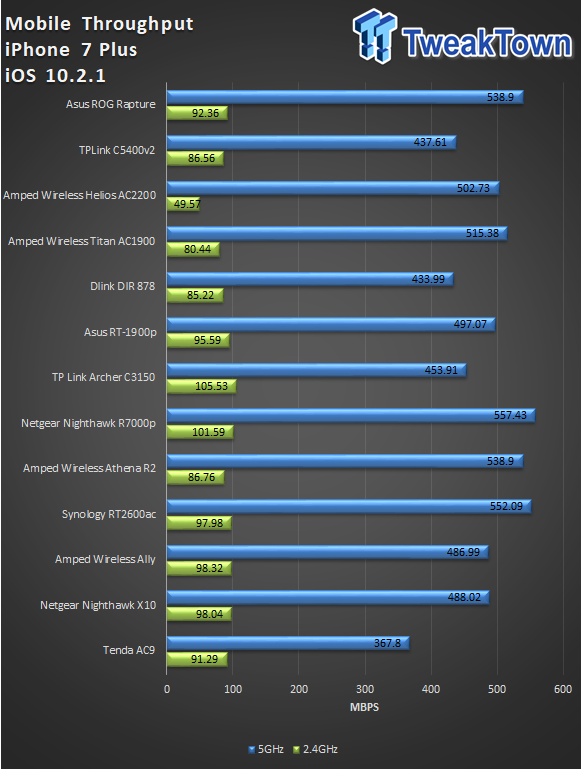 As we ramp down and get ready to change our mobile test platform, the ROG Rapture brought in a solid 538 Mbps with our iPhone 7 Plus.

Our next test for this new setup sees how range affects performance. We start at 10Ft and move out to 30Ft. Routers are tested in their default configuration for this part; the client device is the iPhone 7 Plus. 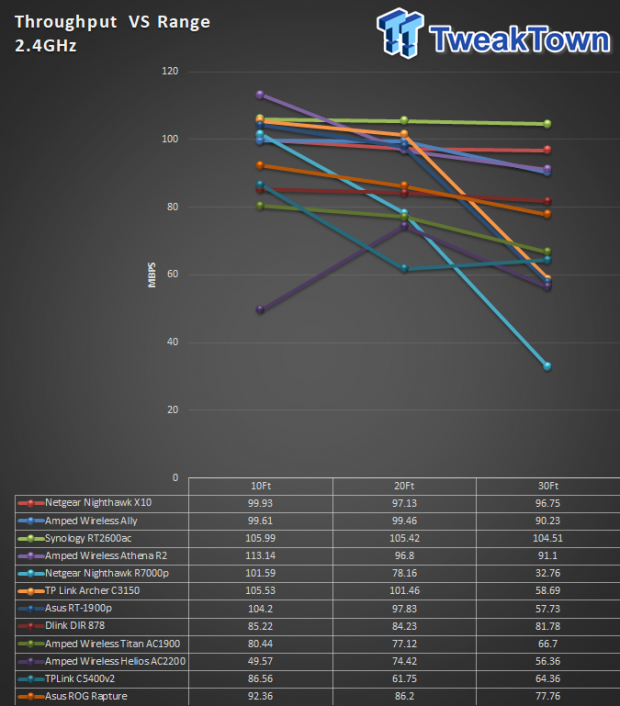 The Rapture is the burnt orange in the charts starting at 92 Mbps at 10Ft and at 30Ft holding on too much of that performance at 77 Mbps. 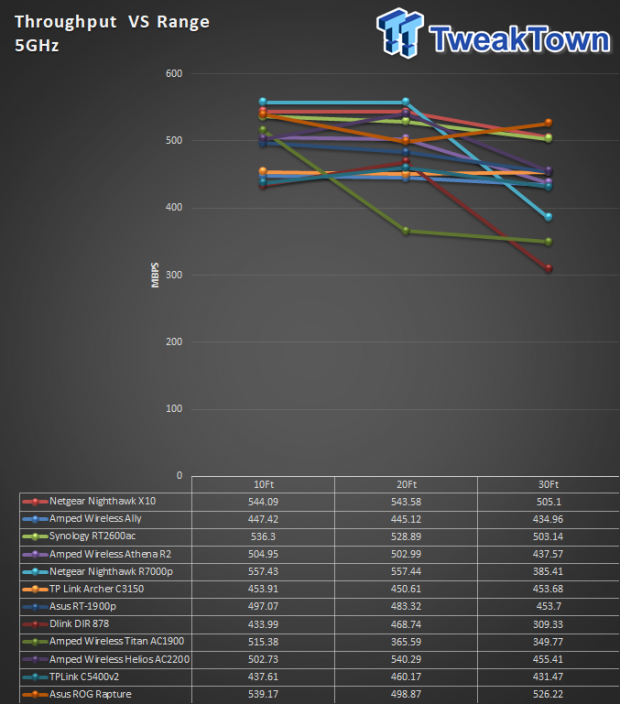 The 5GHz band does even better starting at 539 Mbps at 10Ft and ending at 526 Mbps at 30Ft, losing basically no performance. 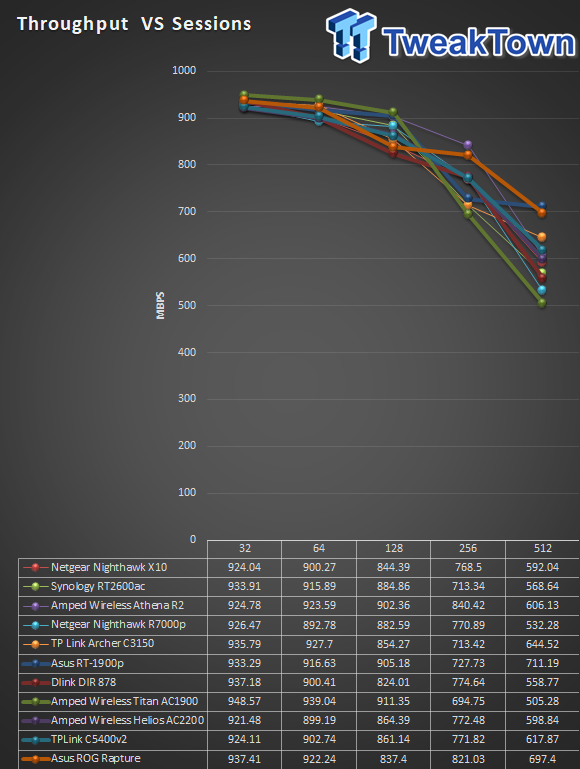 This test gives the router a quick stress to see what kind of load the router can handle.

The battle of the $399 router is quite interesting. This price point gives consumers the option of broad range mesh platforms from Linksys, ASUS, Ubiquiti, and others, or extreme performance single node solutions like a Nighthawk X8, Archer 5400v2, and now the ASUS ROG Rapture.

The Rapture fits right in at this price point as one of the most feature rich platforms I have tested. Build quality fits the ROG brand well with solid materials all the way down to the antennas.

The performance of this router put it close to the quickest I have tested on several occasions. In our sessions test, it was second only to the RT-1900p from earlier this year, and LAN throughput put it at 946.3 Mbps, 1.1Mbps behind the DIR-878 from D-Link.

5GHz throughput at 877 Mbps had it just 40 Mbps behind the Synology RT2600ac for the top spot in desktop testing while mobile throughput needed just 20 Mbps more and it would have taken top honors there as well. Also, the range of the 5GHz band was top notch and took the top spot in our charts.

The interface or WebGUI of the Rapture isn't going to be for everyone. For me, it's easy enough to navigate because I have setup so many routers at this point I can do it blind folded. Even so, the Rapture is flooded with options that for the home user can get a bit confusing. For those wanting a clean UI that's simple to navigate, the Rapture is not for you. For the average gamer, most of these options will come quite easy to understand, and the level of customization will suit their needs even more. Further, Game Center allows you to monitor ping and bandwidth among others in real-time while optimized gaming ports take things to a new level.

Overall, the ROG Rapture is at the top of the stack when it comes to AC5300 class Wi-Fi solutions. This device is perfect for consumers that want the utmost control over their network including optimizations for gaming.

The Bottom Line: For consumers that want performance, quality, full control, and gaming customizations, the ASUS ROG Rapture gaming router is likely the best router your money can buy.