The RE2200T Helios-EX is the more powerful solution in our two-part look at Amped Wireless range extenders. Our first review took a look at the RE1300M Artemis-EX, a capable budget AC1300 solution. As mentioned today, we are shifting over to the Helios, while slightly more expensive, it does have some unique features.

Earlier in the year at CES 2017, Amped Wireless announced the Helios router and extender would be the first set of products to utilize the new Qualcomm Tri-Radio platform. With this new technology, solutions such as the Helios-EX now have a dedicated backhaul to the router, offering the consumer higher performance. Throughput gives the Helios-EX 400 Mbps on the 2.4GHz band and 866 Mbps on the 5GHz band - there is also a second 866 Mbps 5GHz band dedicated for the DirectLink feature. Additional hardware includes the quad-core SoC paired with 128MB of DDR3.

The MSRP of the Amped Wireless Helios-EX comes in at $179.99 with a one-year warranty. 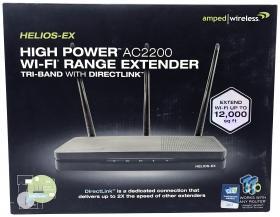 Packaging carries an image of the Helios on the front. The bottom right shows the innovation award with marketing info across the bottom.

The spine of the box has a comparison of Amped Wireless products. 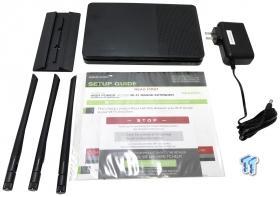 The scope of delivery includes the three antennas, power adapter, and stand.

Looking at the Helios-EX, it uses the same enclosure as the Artemis lineup. This time we have Helios branding on the right with the LED panel in the center.

The rear panel houses three SMA connections, USB 3.0, and four LAN ports. The single WAN is split to the right of the middle SMA. 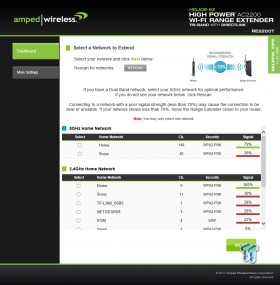 Setup is very similar to the Artemis-EX, except with its dedicated backhaul, you are only choosing one SSID from your router. It's certainly best if you have a 5GHz connection for this, but it will work with 2.4GHz as well. 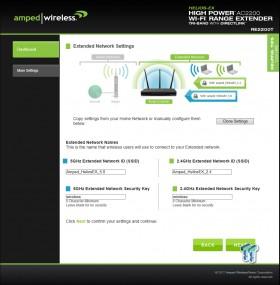 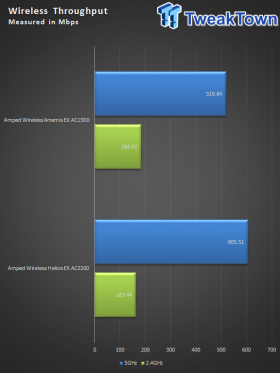 For 2017, we started the year off with a new test platform. Staying with real-world results, we use the ASUS PCE-AC88 as the client adapter for all testing. With that, these two Amped Wireless solutions are the first to go through with this new setup. For the Helios-EX, I was able to pull in 163 Mbps on the 2.4GHz band. The 5GHz band was able to pull in 605 Mbps. 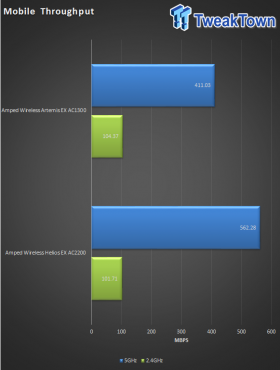 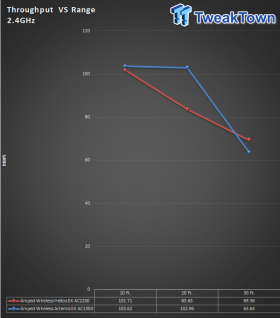 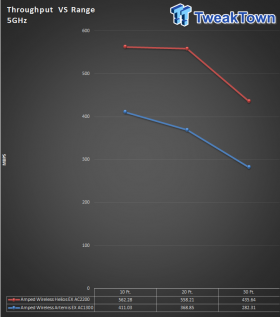 The throughput of the Helios is much greater than the Artemis, and as such we start out at 562 Mbps at 10Ft and hold that through 20Ft. At 30Ft, we drop down to 435 Mbps.

I must say between the two, Artemis-EX and Helios-EX, I enjoyed both equally. The Helios has its obvious benefits, with higher performance and slightly more range. Also, it has the dedicated backhaul which I will start looking at that throughput in future reviews.

As mesh solutions have started to boom here in early 2017, it is nice to see some vendors staying dedicated to the router and extender method allow consumers more choice in how they want to build their network. Build quality of this solution was ample for what it is, the enclosure isn't flimsy or anything, and it does come with a vertical stand should you want to save some space.

The software for this solution is simple and straightforward. A wizard will guide you through setup showing you a signal meter so you can better position the Helios for best performance. Overall, the Helios-EX is a solid solution that carries decent performance. The 2.4GHz band does seem to be slightly weak at 100Mbps real-world, but the 5GHz band makes up for that.

The Bottom Line: The Amped Wireless Helios-EX AC2200 Range Extender is complimented by a solid set of features, most notably DirectLink, that gives it higher throughput with a dedicated backhaul to your router.