SilverStone's TS231U-C RAID DAC carries top tier quality and performance coupled with a decent price point, providing pretty much everything a consumer would want in a two-bay RAID capable DAS.

SilverStone is a brand many of us know from their chassis and power supplies rather than storage. There for a while SilverStone had branched off their storage division under its own wing called Teratrend, but whether the brand wasn't gaining traction in the market or they just decided to end it, it appears that brand is gone.

Instead, today's USB-C refresh of the TS231U carries the SilverStone logo. It's likely a smart move considering the brand recognition and aura of quality that comes with SilverStone-branded products - surely much easier than starting from scratch.

So, the TS231U-C, like I briefly mentioned above, is a refresh of the Teratrend TS231U that I reviewed in 2013. This solution shares a rather similar enclosure but does include true USB 3.1 Gen 2 support via its ASMedia 1352R chipset, allowing for top-tier performance in a two-bay DAS. RAID modes include JBOD, RAID 0, and RAID 1 with operating system support for Windows 7+ and MacOS 10.5+. 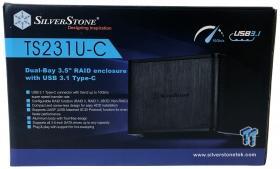 Packaging for the TS231U-C is highlighted by the large USB 3.1 logo in the top right. We have features listed over to the left and an image of the enclosure. 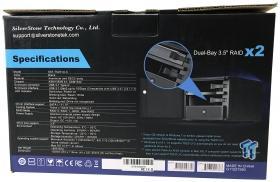 The back of the packaging has a full specification sheet for this solution. 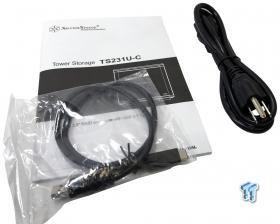 The scope of delivery included a Type-C to Type-C cable to give end users the broadest compatibility. We also have the power cord and manual. 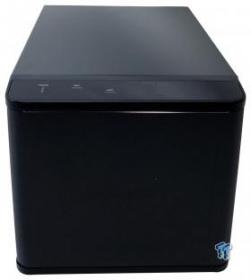 The enclosure itself is very similar in appearance to the original TS231U. However, it does differ with LEDs on the top for the drive activity and power button. 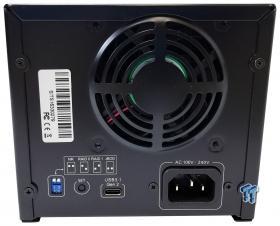 The back now houses the USB-C connection along with the switches for RAID control. 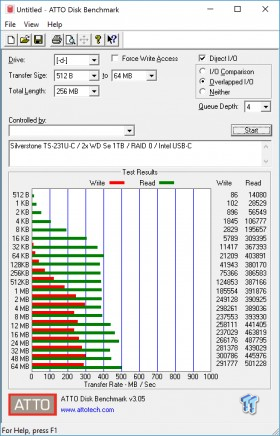 I used ATTO to test the TS231U-C in several RAID modes. I also started out using WD SE HDDs and did a peak performance run later with SSDs. Above, we have RAID 0 with the two HDDs on an Intel USB-C controller. Performance for this combination topped out around 501 MB/s read and 300 MB/s write. 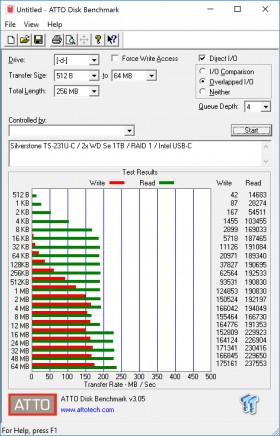 Using the same configuration, I moved the array over to RAID 1. Peak performance then reached 237 MB/s read and 175 MB/s write. 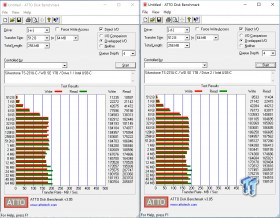 The above image shows each drive being tested at the same time while the enclosure is in single disk mode. As you can see, the internal controller is plenty capable of handling simultaneous backup to separate drives at once. Each drive reached 200 MB/s read and 180 MB/s write. 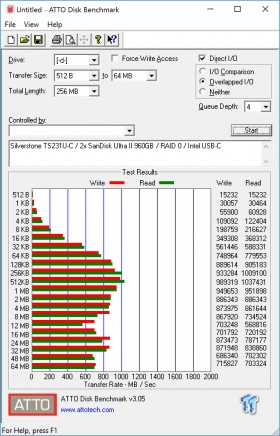 We now moved on to using two SanDisk Ultra II 960GB SSDs. I ran them through a secure erase before testing, so they were reasonably fresh drives. With that said, in RAID 0 this enclosure reached a peak of 1037 MB/s read and 989 MB/s write. 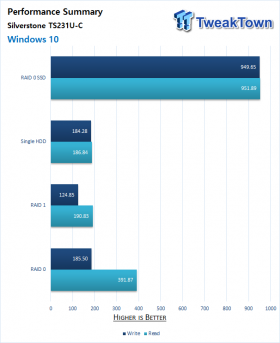 Using CrystalDiskMark we ran the same tests as above and came up with the summary of performance above. As you can see, ATTO produces higher numbers in some situations, but performance is close.

One thing I always count on when reviewing a product from SilverStone is the quality. Even their budget solutions often carry good attention to detail and the same goes for the TS231U-C. The exterior of this unit is very solid with steel construction throughout while the aluminum front panel in its brushed design adds a bit of aesthetics to the unit. The one downside is the sometimes-finicky switches used for hardware RAID modes, but the flip side would be to use software RAID, and I'm not much for that personally.

The performance was wonderful with the TS231U-C. Using the SanDisk Ultra II SSDs, we proved this unit has plenty of throughput for any hard drive that would be installed, reaching 950 MB/s read and write. Additional testing also showed this unit is more than capable of handling simultaneous transfer to independent drives which is a plus for anyone that wants one drive for backup and another for games or data.

In closing, the TS231U-C is a worthy successor to the original, as it carries substantial build quality, top tier performance, and a price that makes it quite competitive in the current market.

The Bottom Line: SilverStone's TS231U-C RAID DAC carries top tier quality and performance coupled with a decent price point, providing pretty much everything a consumer would want in a two-bay RAID capable DAS.