Warping out of the gate with a clever concept which allowed the Star Trek series to respect to what had come before but also allowing it to chart its own path, the 2009 J.J. Abrams reboot successfully welcomed a new audience to the franchise by making hip and sexy for the first time since 1966, even if it's new, less subtle sensibilities left some long-term fans out in the cold of space. With no limit to the narrative possibilities, its 2012 sequel Into Darkness was a disappointingly regressive follow-up, inexplicably shoe-horning an appearance from one Khan Noonien Singh, which only confused new fans but angering old ones, alongside some behind the scenes subterfuge thrown in for good (bad) measure.

Three years later and releasing on the occasion of Star Trek's 50th anniversary, Beyond reunites the reboot cast with a new director, screenwriting team and a fresh new attitude that sets phasers to 'fun'. 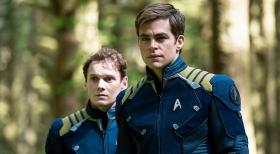 Three years through their five-year mission, the crew of the Enterprise led by Captain Kirk (Chris Pine) takes the opportunity for some much-needed R&R on star base Yorktown when their leave is inexplicably cut short in favor of a rescue mission to a nearby system. Unfortunately, the mission turns out to be a ruse when their ship is attacked by a swarm, downing the Enterprise and her crew on a hostile alien planet. 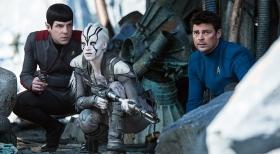 There's definitely something to be said about the creation of art through adversity, with some of the most memorable motion pictures of all time, such as Apocalypse Now and Titanic suffering notoriously troubled productions. While Star Trek Beyond isn't quite of the same caliber, it had more than its fair share of behind the scenes issues, with J.J. Abrams directorial replacement Robert Orci walking from the project, script problems, the death of Leonard Nimoy and an immovable release date all contributing to a potentially pressure cooker of a situation. But not only is Beyond not a disaster - it's the best of the three reboot films and more fun than its two predecessors combined. 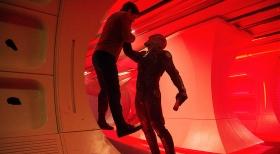 The third time around for the new crew of the Enterprise finds them noticeably more comfortable in their roles. Years have passed both behind and in front of the camera, and there's a tangible sense that these characters have grown. Chris Pine's Kirk is less brash and more thoughtful, while Bones is actually given a meatier role which expands on his token appearance in the first two. The introduction of Sofia Boutella as Jaylah is a welcome touch which gives the main cast another fun character to play off, and as the introduction of Rey in The Force Awakens, it's great to see some ass-kicking female characters in traditionally male dominated series (but not done in an awful, misandrist way like Ghostbusters 2016).

I don't know why, but consistently the weakest point in almost all of the Star Trek film is its villain. Unfortunately, Beyond doesn't buck the trend. Despite casting the fantastically talented Idris Elba, Krall is an entirely one-dimensional villain with a paper-thin motivation who also doesn't feel like an entirely convincing threat. 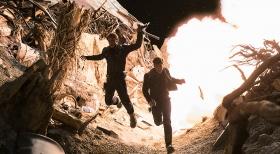 For the first time in the reboot series, almost all of the ensemble cast are granted their moment to shine. The script by Simon Pegg (who also plays the role of Scotty) and Doug Jung is a self-contained love letter to Trek lore, topped with a touchingly emotional tribute to Leonard Nimoy's Spock (I was seriously close to tears) and littered with references and sight gags to honor fifty years of Star Trek lore.

It's ironic that it's taken the director of four Fast and the Furious films to introduce an improved pace to the series, which allows the audiences to breathe and enjoy the sights just a little more. Sure, there are frequent moments of breathless action, but Beyond brings back a sense of wonder to everything the Federation has built and achieved - from the Enterprise herself, to huge starbases. There were many (myself included) who raised a single Vulcan eyebrow to the news that Justin Lin was directing the picture, but just as outsider Nicholas Meyer rejuvenated the series with The Wrath of Khan and again with The Undiscovered Country, Lin helms Beyond with competence, confidence and skill. I'd love to see what Lin could do with another.

While Star Trek opened the door to infinite possibilities and Into Darkness seemed intent to squander them, Beyond resets the reset universe by introducing compelling new elements and paying homage to the series rich legacy. I hope it lasts for another 50 years - and 50 years beyond that. 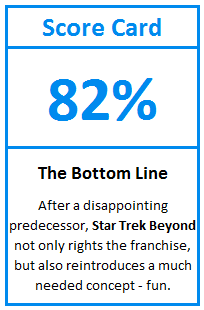