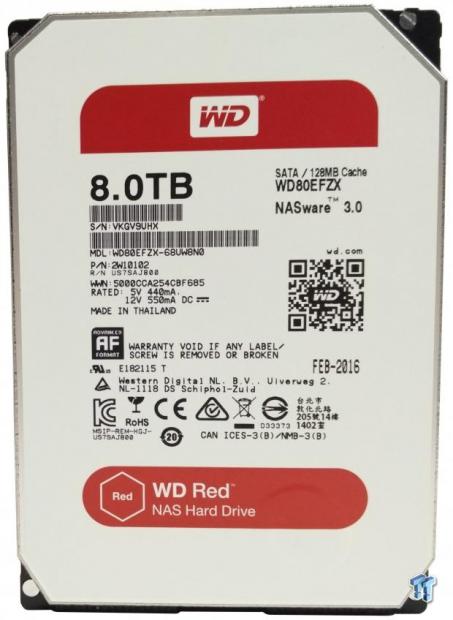 It has been quite a long time since I have dusted off the HDD test equipment, so I was certainly excited to get the new helium-filled WD Red 8TB in the lab. With Seagate now expanding their SMR technology into all product ranges, it's good to see WD getting their technology where it needs to be to compete in the market.

With advancements in technology, WD has now brought their HelioSeal technology to the NAS market in the 8TB WD Red. This drive like the 6TB utilizes NASware 3.0 which significantly improves the reliability and performance, along with StableTrac and 3D Active Balance improving the resilience of the Red platform in multi-drive installations.

The 8TB Red is supported in up to eight-bay tower platforms while the Red Pro is dedicated to Rackmount infrastructure. To get into more detail, let's slide down and check out the spec sheet from WD. 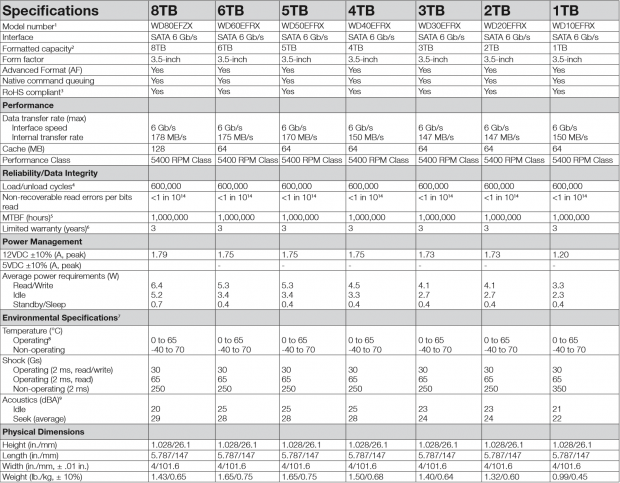 Diving down into the specifications, we start with the model number, WD80EFZX. From here we move down and find the 8TB using the SATA 6Gb/s interface with a formatted capacity of 8TB. The form factor is the standard 3.5" with Advanced Format and Native Command Queuing support.

Sliding down into the performance section, the internal transfer rate is listed at 178 MB/s featuring a 128MB cache and a "5400 RPM Class" spindle speed. Load/Unload is listed at 600,000 while the MTBF is at one million hours. Warranty is still the standard three years on the Red platform while power consumption is said to average 6.4 watts in a read/write situation and 5.4 watts at idle.

The 8TB Red ushers in with a new sticker design, still with the Red branding at the bottom but a cleaner more organized look. Capacity is listed in bold print while the cache and model number are off to the right. 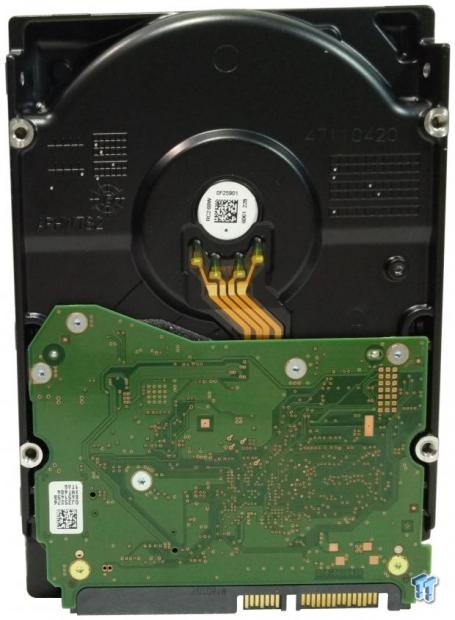 The backside of the drive doesn't appear to be much different than any other 3.5" drive.

Looking at the PCB, we see everything is in order for drive trays and sleds. 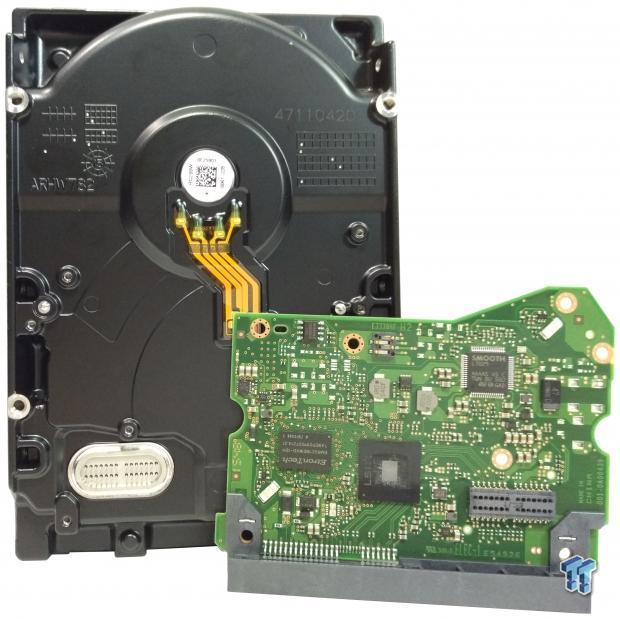 Pulling off the PCB, we find a new layout for the PCB that includes an LSI controller, Etrontech DRAM, and Smooth motor driver. 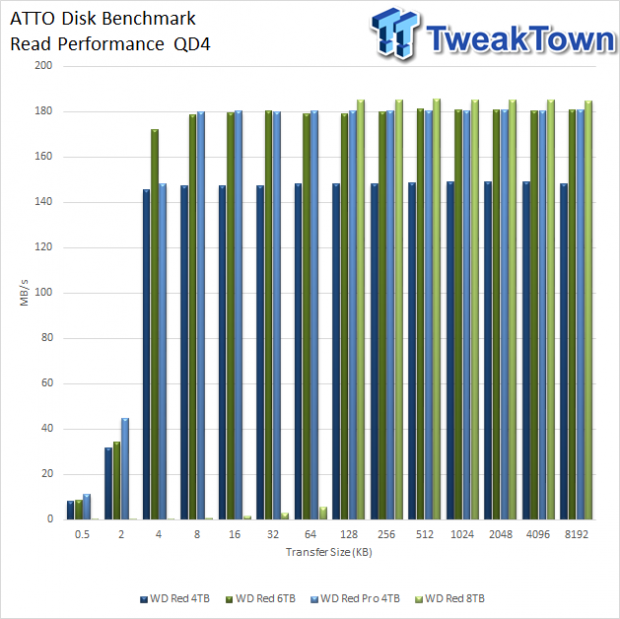 In ATTO read testing, the Red 8TB took slightly longer to get moving but in the end was the quickest at just above 180 MB/s. 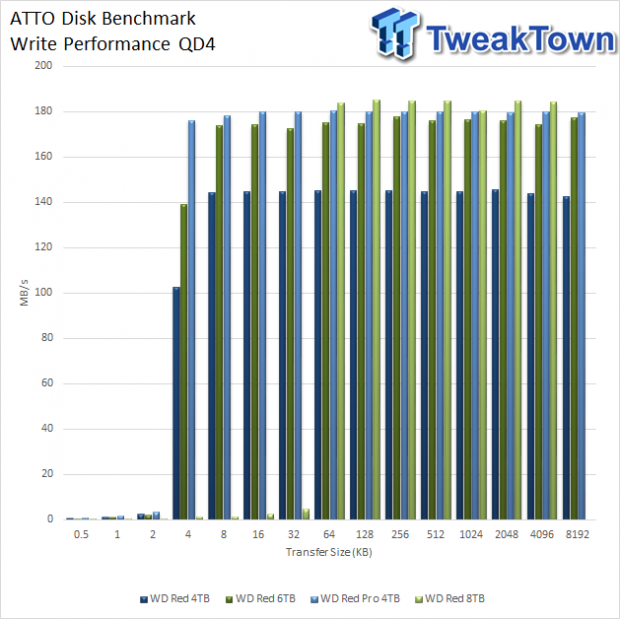 Write performance was similar though the drive was able to get up to speed a full QD prior. Performance still was able to match at 183 MB/s. 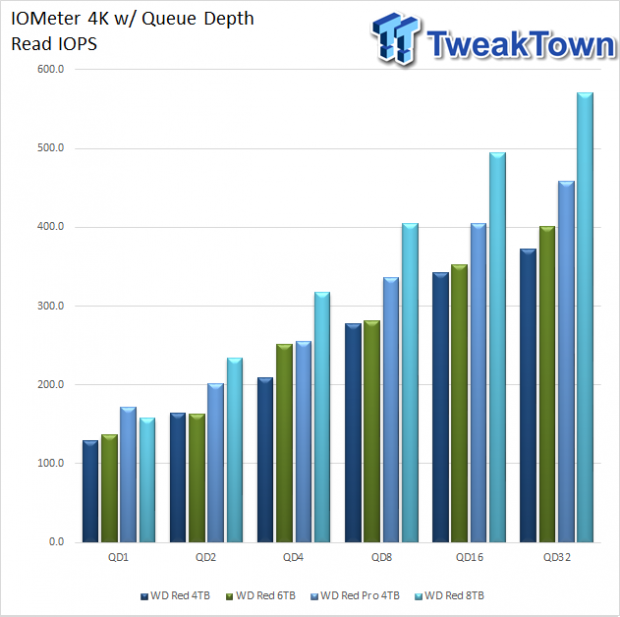 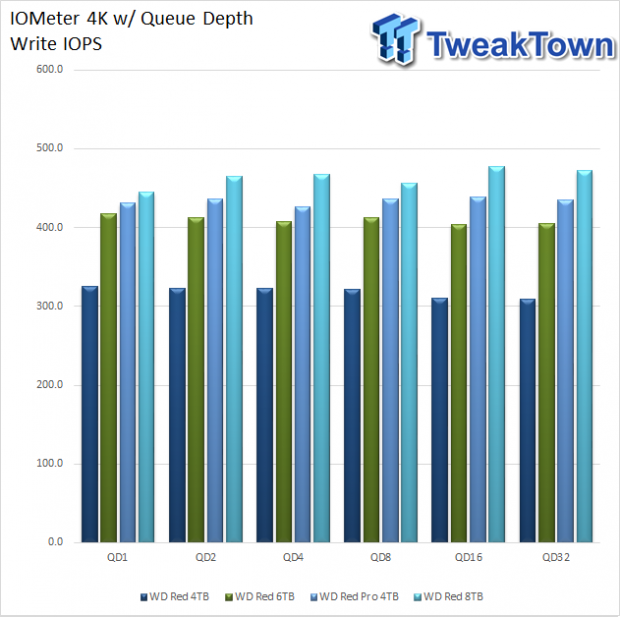 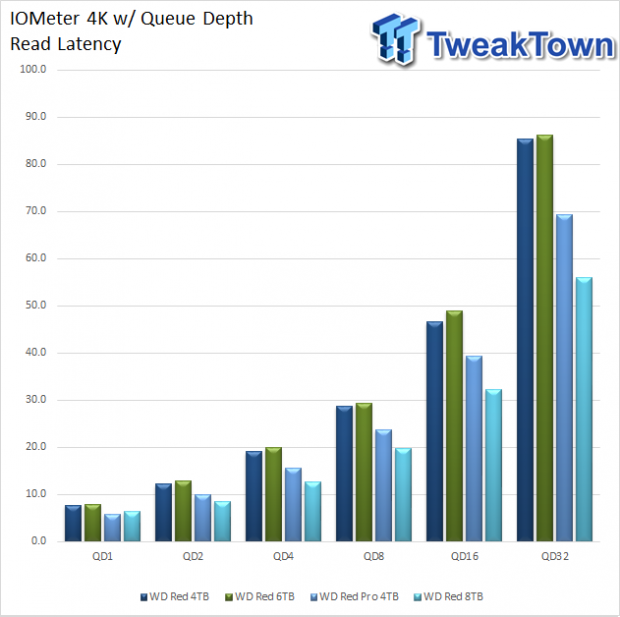 The latency results tell the story even better as the 8TB Red sticks under 60ms even at QD32 while the previous "best" model the 4TB Red Pro is closer to 70ms. 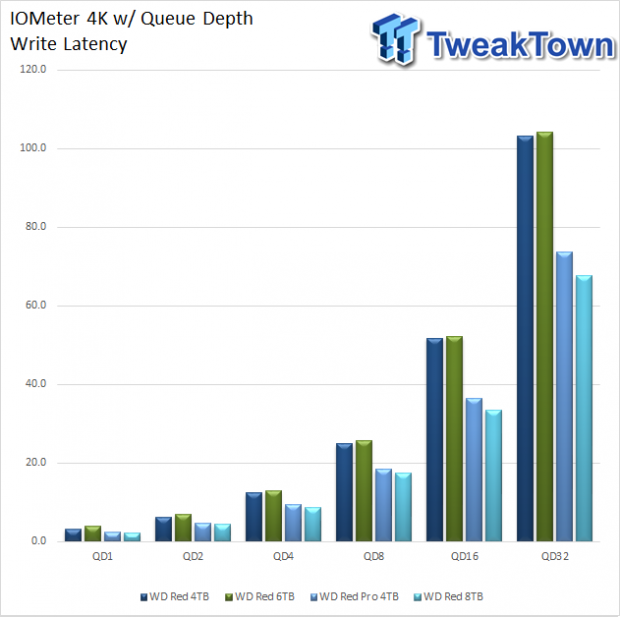 Write latency was rather good as well, with the 8TB beating the 4TB Pro by a slim margin of 10ms. 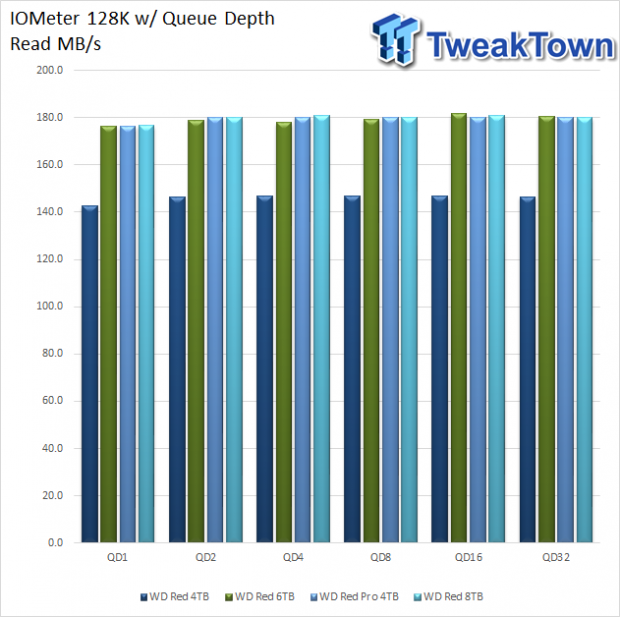 Over to sequential performance, the 8TB Red matched the performance seen with the 4TB Red Pro and 6TB Red, near 180 MB/s. 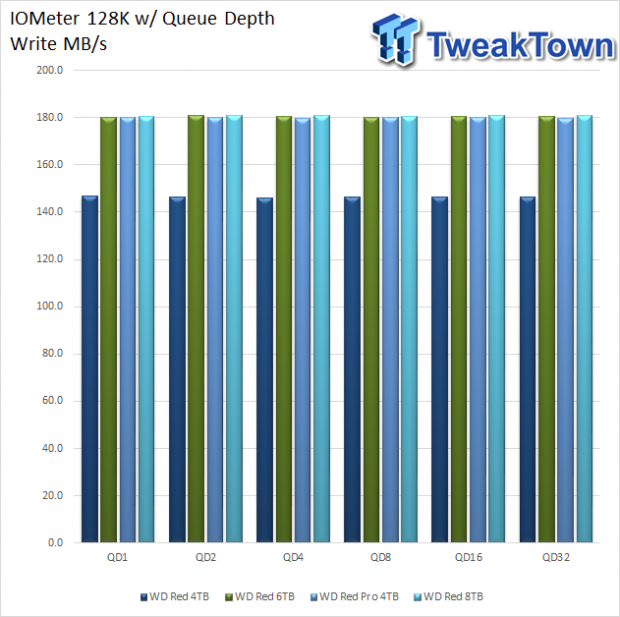 Sequential write was more of the same song and dance with the 8TB staying right with the two previous Red models. 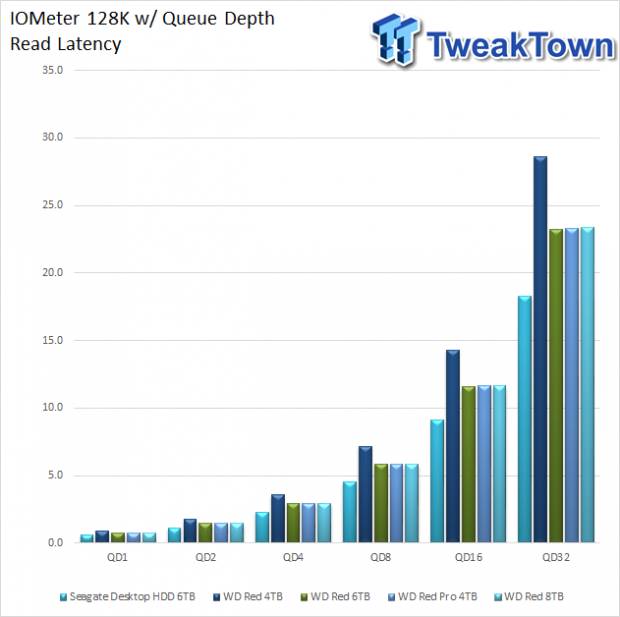 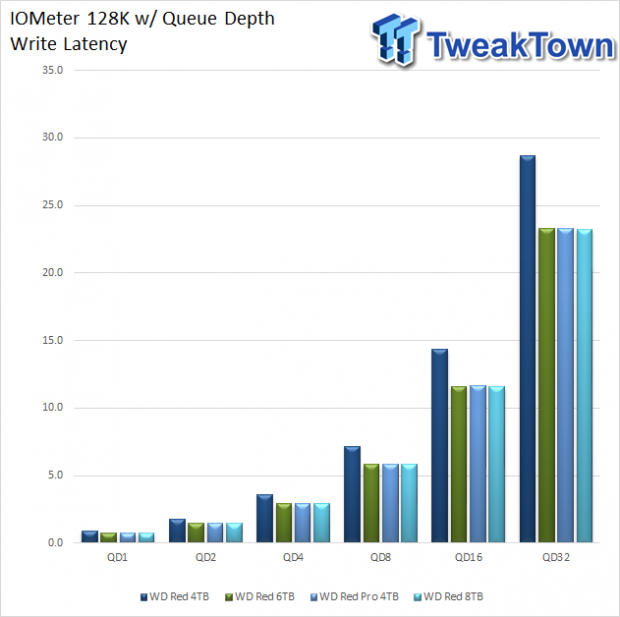 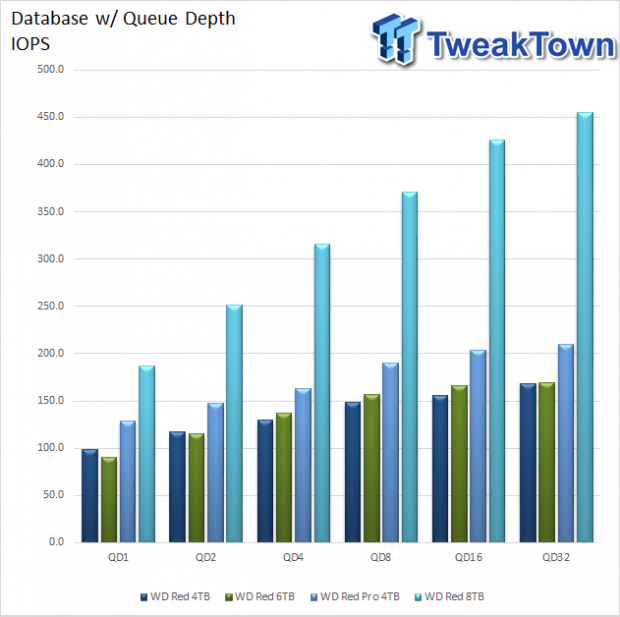 Moving on to our workloads, the 8TB Red quite honestly demolishes every drive previous by a large margin. It appears this drive has been finely tuned by WD. While previous drives produced a peak of 200 IOPS, the 8TB reached 450 IOPS at QD32. 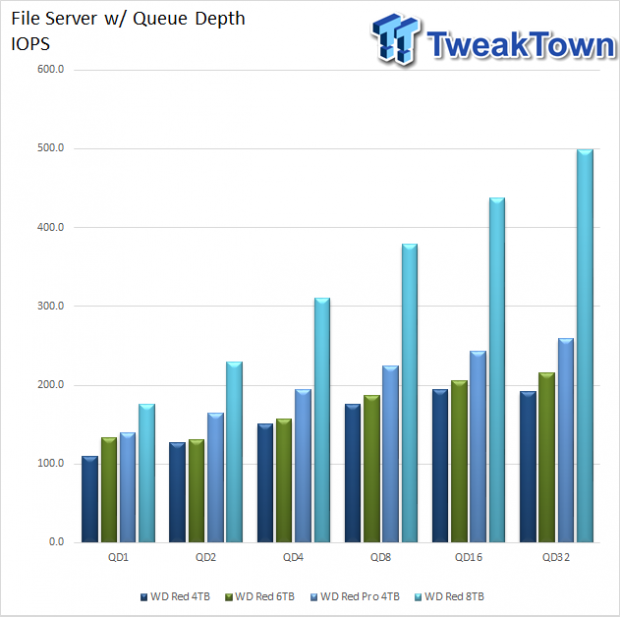 It doesn't take long to figure out we have a pattern forming. In File Server, we see the same large performance increase from the 8TB, this time peaking at 500 IOPs. 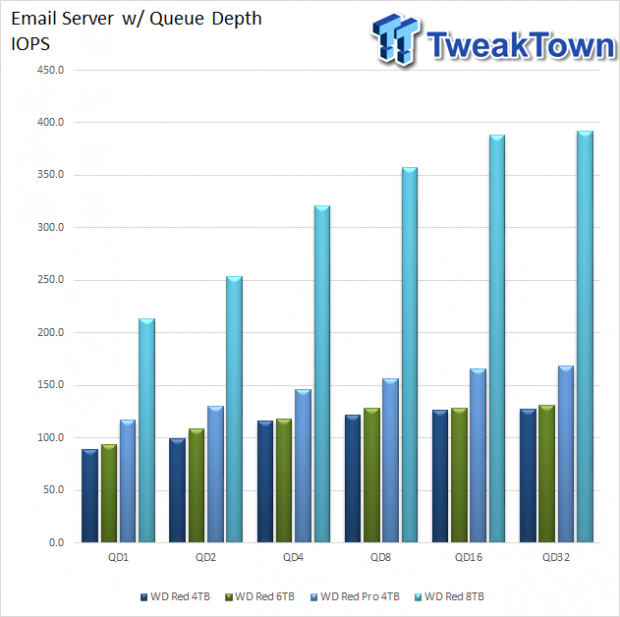 Email server too was quite good, nearly touching 400 IOPs at QD32. 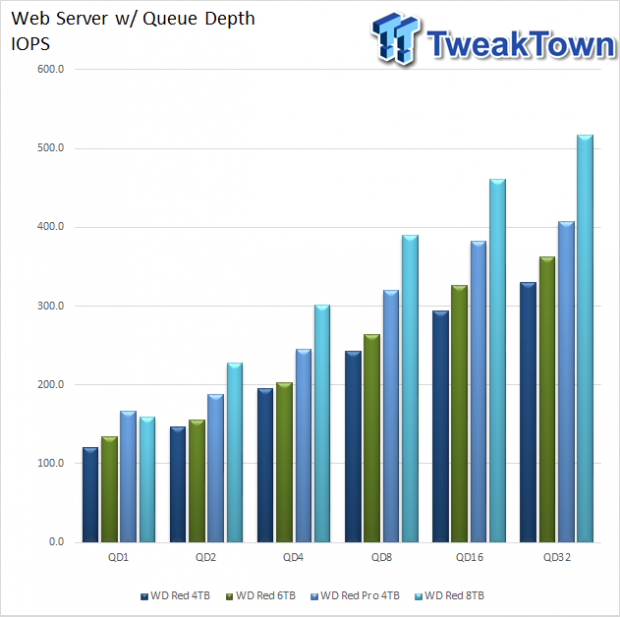 Web Server was a little closer for the Red Pro, but the 8TB still topped it by 110 IOPs. 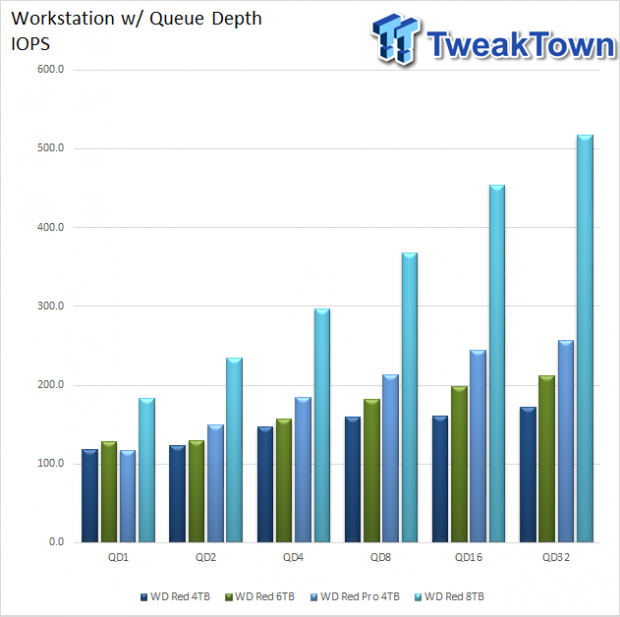 Workstation shows the 8TB Red easily doubling the performance of every drive on the chart. 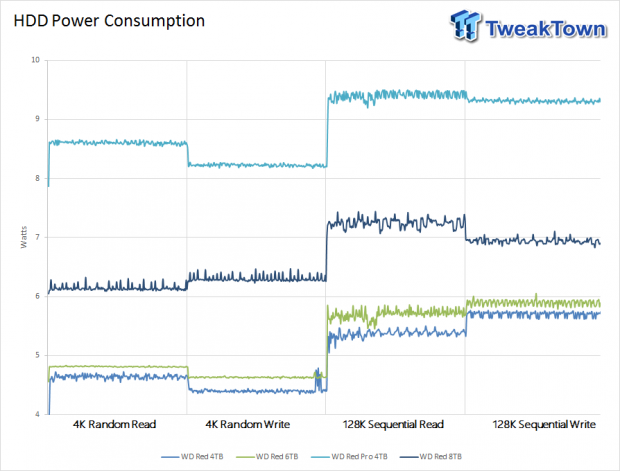 The 8TB Red starts off with random read and a solid 6.2 to 6.4 watts, write does increase the load but only slightly to around 6.5 or so.

Moving to sequential read and write, we have a jump above 7 watts nearing 7.5 watts and then moving back down to 6.9 in sequential write.

These numbers put the 8TB in a solid position in terms of performance per watts, especially considering how well it did against the Red Pro.

Prior to the month or so I have had these drives, I had never had the opportunity to test helium technology. With the launch of the 8TB Red, WD has seemingly stabilized the platform enough to trust it out in the wild with consumers and in introducing this with the NASware 3.0 platform, consumers do get a sense that these new drives have undergone "FIT" testing. In addition, with the 8TB Red now being launched, we have options for drives designed to be used in multiple drive enclosures such as NAS, DAS, and workstations.

The performance of the 8TB Red was quite good. At the beginning of testing when I was running through IOMeter and several other benchmarks I normally run, I didn't really notice how good the 8TB was. It wasn't until I started punching numbers into the charts that I saw it placing a beating on many of the drive I tested in the past, including the Red Pro. ATTO disk bench produced 180 MB/s on both end read and write and moving to Random testing, the Red was able to knock out nearly 600 IOPS read and 50 IOPS write.

IOMeter with sequential was spot on with what we saw in ATTO, 180 MB/s read and write but moving to the "SMB" or Workloads testing, I was genuinely astonished to see how well this drive did. Database produced 450 IOPs, 250 more than the Red Pro, while File Server and Email Server brought in 390 and 500, respectively. In finalizing my testing, I ran through the Workstation load and once again the 8TB Red topped all with 520 IOPs.

In closing, the WD Red in the new 8TB capacity is one of the most impressive drives I have tested, and that's after seeing nearly every new drive come through in the past four years.

The Bottom Line: The 8TB Red from WD is one drive to get excited about offering both performance and capacity in one solution, with a comfortable price point considering what it has to offer.