As the cost of NAND flash decreases by the day, vendors have begun offering higher capacity options in commonplace items such as flash drives. When we first started reviewing flash drive religiously a few years back, the most common capacity received was either 16 or 32GB. In today's market, 128 and 256GB solutions have taken over and become quite common.

The Rage 2 is one of two flash drives announced at CES 2015 from Patriot Memory. The Rage 2 is available in both 128GB and 256GB capacities and features high quality MLC NAND, along with the latest IC controller. Marketing specifications for the Rage 2 offer up to 400 MB/s read and 300 MB/s write.

OS compatibility is listed as Windows ME and later, Mac OS 9+, along with Linux Kernel 2.4+ support. MSRP of the 256GB Patriot Rage 2 is listed at $199.99 with a five-year warranty. 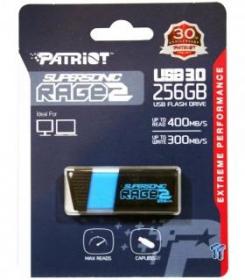 Packaging for the Rage 2 is the standard bubble type we have seen in the past. Marketing information is found next to branding on the right side.

With our first look at the drive, we notice the Rage 2 carries on where its predecessor left off. Here we have the reverse slider design along with the blue on black color scheme. 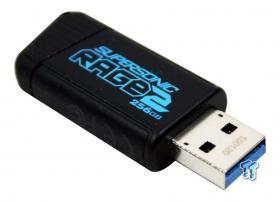 The Rage 2 is a rather small flash drive and it does so by allowing the USB 3.0 port as seen above to slide out from the end. 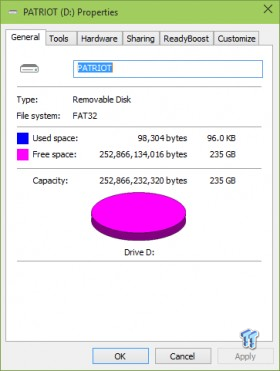 The Patriot Rage 2 is factory formatted with the FAT32 file system, ensuring compatibility between Windows and Macintosh computers. The usable capacity after formatting is 235GB. 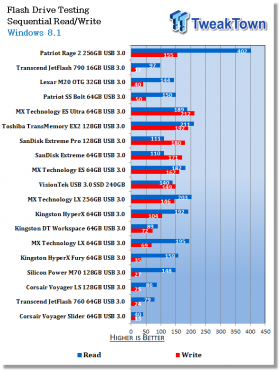 Testing within Windows 8.1 allowed our sample of the Rage 2 to reach an impressive 402 MB/s read. Write speed, on the other hand, didn't quite make it to the 300 MB/s we were hoping for, coming in at just 155 MB/s. 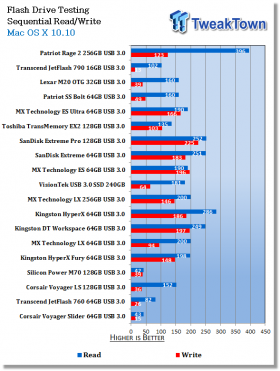 Switching over to our MacBook Pro, we ran the Rage 2 through sequential testing yet again. Here we came up with 396 MB/s read and 123 MB/s write. 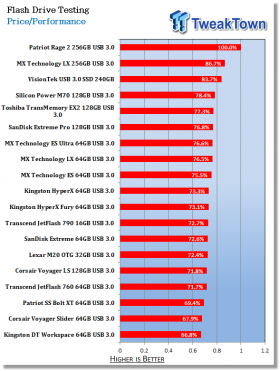 Even with the Rage 2 not reaching its full potential with write performance, the raw speed of its read operations coupled with its price per GB hovering around 78 cents, launched this solution to the top of our charts.

The Rage 2 is one of the largest capacity flash drives to come through the lab. With that said, having capacity is only one part of the equation, while most solutions as seen in our charts are only capable of producing near 200 MB/s read, the Rage 2 topped 400 MB/s. In fact, the average read speed across all the flash drives we have tested is 154 MB/s, while that same metric produces an average write speed of 94 MB/s.

Another metric I tend to focus on is build quality. Let's face it, nobody wants a flash drive that's going to fall into pieces the first time they drop it, and you certainly don't want something that's going to block adjacent ports or be a royal pain to plug in. I'm glad to report with the Rage 2 that we had no issues with this drive blocking ports or dropping out during testing. The sliding mechanism used with this drive operates quite easily, to the point you can open it with a single finger, if you're so inclined.

Performance of the Rage 2 was on par with marketing when it came to read operations. Both our Windows and Mac test platforms showed results near or over 400 MB/s when testing sequential read. However, I was slightly disappointed to see just 155 MB/s write with Windows, and a worse 123 MB/s write within OS X. Of course, performance isn't everything, and the Rage 2 jumped to the top of our Price/Performance chart due to its price per GB at 78 cents.

PRICING: You can find the Patriot 256GB Supersonic Rage 2 Series USB 3.0 Flash Drive for sale below. The prices listed are valid at the time of writing but can change at any time. Click the link to see the very latest pricing for the best deal.

The Bottom Line: The Rage 2 is the quickest flash drive when it comes to read performance, holding it back is its write performance, but overlooking that a great bang for your buck flash drive.