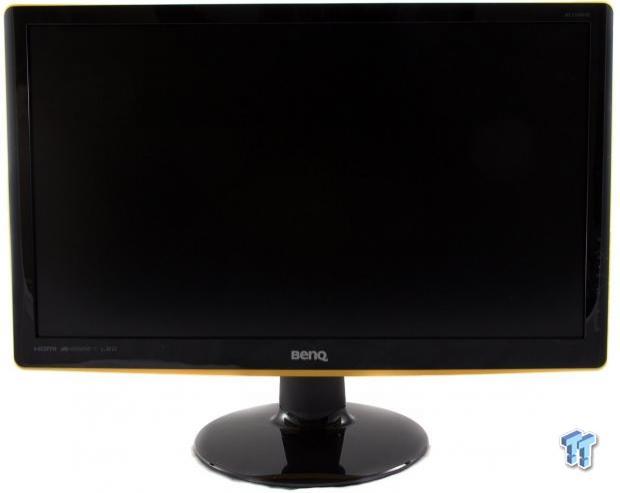 We've got another BenQ monitor passing through the lab today. This time, the monitor we have in for testing is a 21.5-inch gaming monitor aimed at those who like playing real-time strategy (RTS) games such as League of Legends or StarCraft.

In fact, the front of the box shows the Gambit team, a team of professional League of Legends players, further adding credibility to this monitor's capabilities as an RTS gaming monitor.

We're going to put it through our again updated monitor regimen. We've added more aspects to our monitor reviews, as you'll soon see when clicking through the review, so sit down, have a drink, and let's get on with it.

Instead of covering all of the specifications, we're going to direct you at the chart below, taken from BenQ's product page. After the image, we're going to highlight some of the more important specs before moving on to the features, pricing, and gaming specific features. 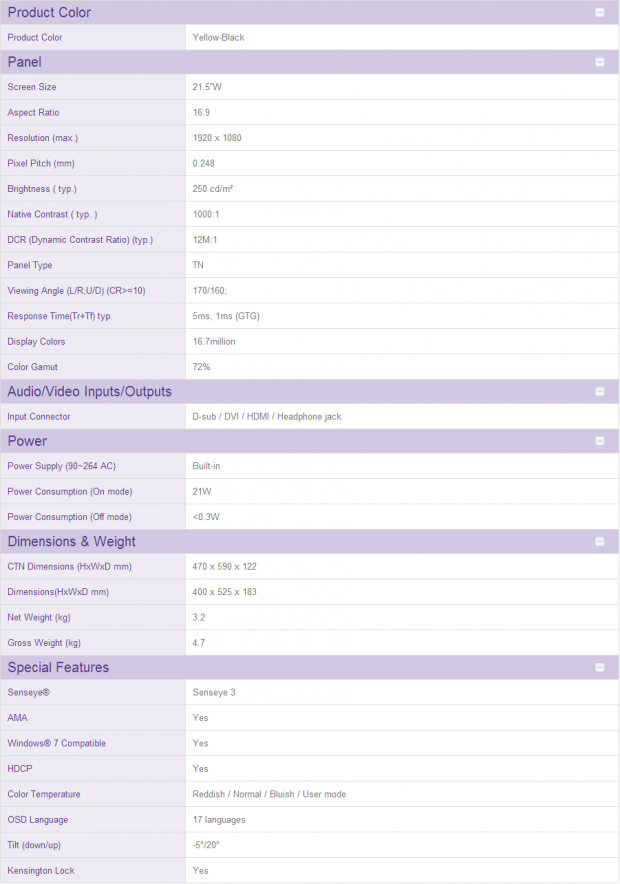 The panel is of the TN variety, meaning color reproduction and viewing angles will be affected, but it reduces the cost of the monitor. BenQ rates the viewing angles at 170/160 horizontal/vertical. It features VGA, DVI, HDMI, and a headphone jack for connectivity.

BenQ says the monitor draws 21 watts, a spec we will put to the test later on in the review.

This is really a no-frills monitor, providing only what you need to get a great RTS gaming product. Of course, it has rapid 1ms GTG response time. It also features the ability to adjust the monitor screen size to your liking.

As with most, if not all, BenQ monitors, we have ZeroFlicker technology, that is designed to eliminate flickering at all brightness levels. ZeroFlicker should allow for extended gaming with reduced eye fatigue.

Next we have an important feature for the RTS game category: Black eQualizer. This is a feature that BenQ has added to brighten up dark scenes without over-exposing the white levels. The idea is that hidden details in dark parts of the scene will be brighter and easier to spot, track, and attack.

Of course, BenQ has packed in exclusive RTS modes that are tuned to bring out the details in various RTS games. Picture modes are how you access these preset settings. RTS 1 mode is for StarCraft II, and RTS 2 is for Dota II.

PRICING: You can find the BenQ RL2240HE Gaming Monitor for sale below. The prices listed are valid at the time of writing but can change at any time. Click the link to see the very latest pricing for the best deal. 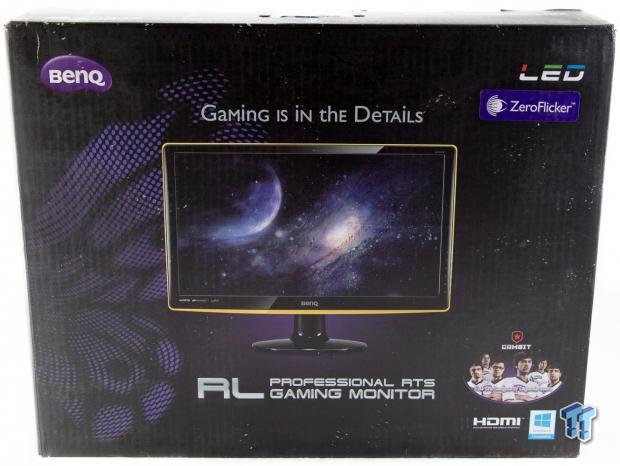 The RL2240HE comes in a black box with some of the various features called out on the front. It's somewhat understated, only covering the facts that it is designed for RTS gaming, has HDMI, is backed by Gambit, uses LED backlighting, has no flicker, and is Windows 8 compatible. 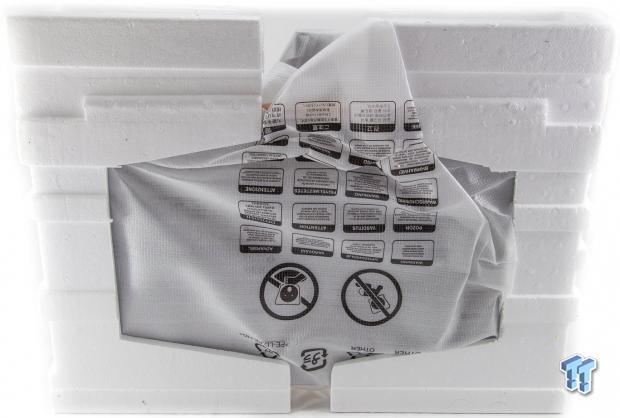 The panel itself is wrapped in plastic and protected by foam, as you would expect. Above, you can see the foam packaging out of the box.

No dead pixels were found in the monitor during our testing. 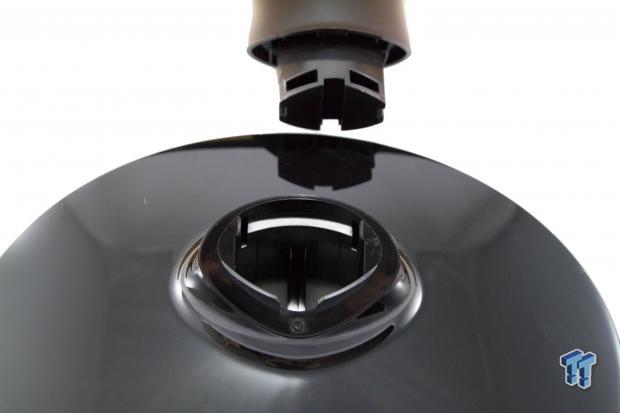 Assembly is incredibly simple since the monitor comes in just two pieces. All you have to do is slide the monitor into the base and it clicks in--no screws or otherwise required. 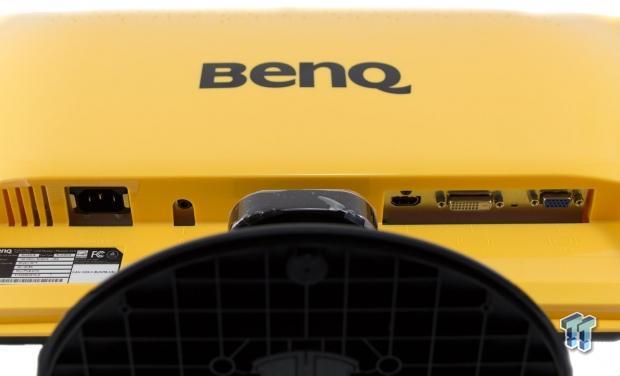 From left to right, we have the power in, headphone, HDMI port, DVI port, and VGA port.

The OSD makes use of five physical buttons on the side of the monitor, lined up quite nicely with their own screen functions. BenQ has made it extremely simple to adjust which picture profile you are using and the display mode scaling.

Of course, if you need more control, you need to drop into the full menu, which is easily navigated using the physical buttons. For more, be sure to watch the video above. 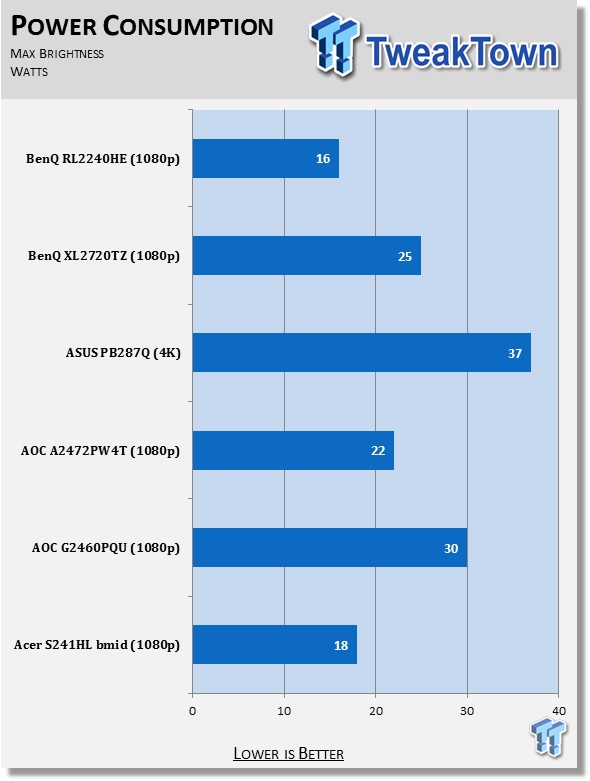 The BenQ RL2240HE sits at just 16 watts of power consumption. This is five watts lower than the spec provided by BenQ, and it is the lowest consumption we have seen from any display. But does it lack in brightness due to the low power draw? 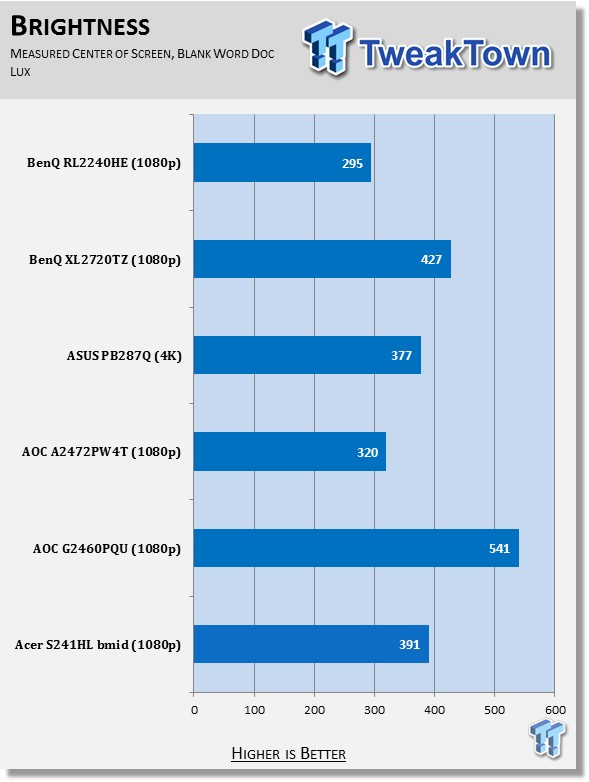 Along with the lower power draw comes a lower maximum brightness. We measured the RL2240HE at just 295, 25 lux behind the next brightest monitor. 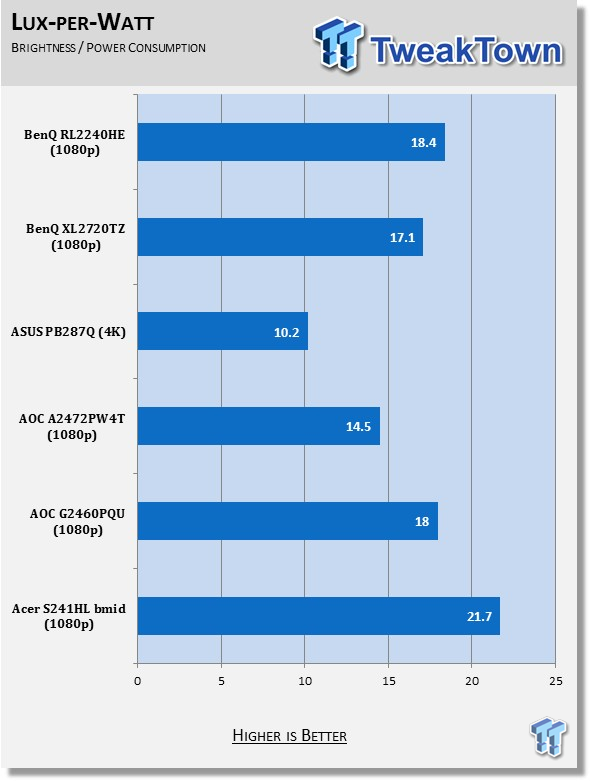 However, in this test, we see that in terms of how bright it is compared to how much power it consumes, the RL2240HE excels, producing a score of 18.4, behind only the 21.7 of the Acer S241HL bmid.

I realize this is an RTS monitor, but seeing as how I suck at RTS games, I thought I might also use Battlefield 4 so I could focus on the actual performance rather than getting killed constantly. What I found is that the RTS picture modes cause the screen to be washed out. The BlackEQ function is only available in the two RTS picture modes and the custom Gamer defined setting modes.

I found sRGB to be my favorite setting for gaming on Battlefield 4. Movie provides higher sharpness-something I can adjust on sRGB-but it looks washed out, too. In the RTS modes, fast moving vehicles had weird outlines that are hard to describe, but it certainly detracted from gameplay.

But enough about a use case that isn't what the monitor is designed for. I downloaded and fired up StarCraft II to see just how much better this monitor performs in RTS games.

As miserable as I may be at StarCraft II, I can start to appreciate the RTS picture modes offered by this BenQ monitor. These tuned picture modes allow better visibility of the battlefield, making commanding your troops much easier.

Adjusting the Black eQualizer, I found that it turned blacks into grays, which is partly what helped visibility. At the same time, it did bring with it a sort of washed out look, as noted above, but in this case, it is useful.

There aren't a whole lot of settings for me to go on about, but I can definitely see where this monitor has a home in the RTS player's arsenal. Having the pre-tuned picture modes means you can get to gaming without messing around with your monitor and wasting time, which is always a good thing.

Photo display mode dimmed the display some and adjusted various settings to make photo edited easier and more accurate. Photos in Lightroom were easy to develop, with colors being close to true-to-life.

Switching to video mode brightens the screen back up, and brings back that somewhat washed-out look. It also adjusts the color temperature some. I fired up a 1080p movie and found that I preferred Standard or sRGB mode to video mode, though this could be due to the choice of movie not featuring dark scenes.

Overall, the monitor works quite well as a general purpose monitor, should you find a picture mode or adjustment that you like. It has good colors, sharpness, contrast, and adjustments. But this isn't why we're here.

Instead, we're here to talk about how it games. In FPS games, it's not so great, for obvious reasons as discussed in this review, with the main one being it is aimed at RTS gamers, not FPS gamers. However, people usually play more than one type of game, so we play around with multiple to see how versatile the display is.

For RTS games, having the pre-tuned monitor settings are a large plus, and certainly help your gaming ability in RTS games. The Black eQualizer helps bring out details hidden in the shadows, making target acquisition that much easier. 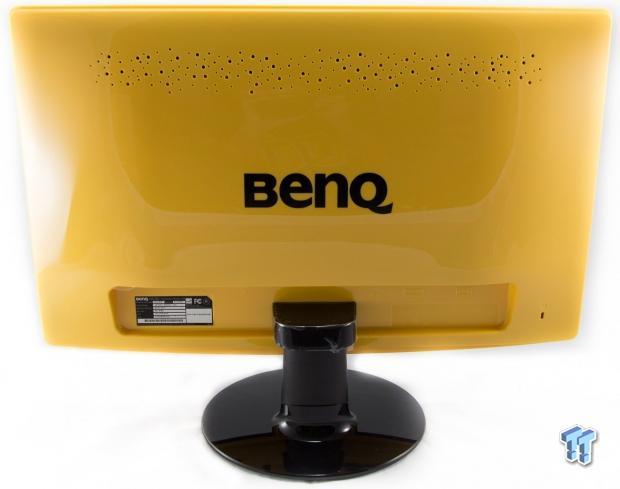 Something else to cover is the physical design. We like the simple assembly, but wish the stand had height adjustment. The eye-catching yellow backing is also quite nice, in our opinion, but it may not go with the theme of your PC, unless you're planning a yellow case build of course.

Using physical buttons for the OSD is a nice design feature, as we find ourselves having trouble with touch-sensitive OSD buttons. We also like the OSD menu options very much, as previously discussed. The monitor is also light and portable, due to its size and weight. It weighs just 3.2kg, so about the same as a desktop replacement laptop... or lighter. We also like the efficiency provided by its low power draw and relatively high brightness output.

But we're beating around the main bush, and that is price. BenQ sells the monitor for just $177, making it quite a deal for an RTS gamer. If you're not a huge RTS gamer, and find yourself as a general PC user or FPS gamer, there are other monitors for you. For the size, $177 is a bit on the high side, but it comes with BenQ's renowned quality and gaming performance.

At the end of the day, we wouldn't mind coming home to the RL2240HE on our desk for some RTS gaming. It is a solid product and should be on your list if you are in the market for a new monitor and mainly play RTS games.

PRICING: You can find the BenQ RL2240HE Gaming Monitor for sale below. The prices listed are valid at the time of writing but can change at any time. Click the link to see the very latest pricing for the best deal. 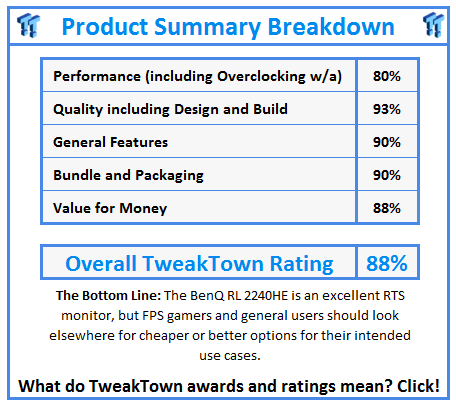