There's little doubt that Seth McFarlane is one of the hardest working guys in Hollywood, creating a number of television shows; two of which have survived to become long running hits and feature him voicing multiple characters, popping up as hosts of the Oscars, the Roast and now helming major motion pictures, with Ted in 2012 and now A Million Ways to Die in the West (he also wrote the film's tie-in novel). But is he perhaps stretching himself a little thin? From the looks of this, that may be so. 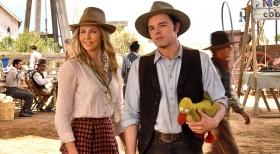 When wild west sheep farmer Albert Stark (Seth McFarlane) is dumped by his partner Louise (Amanda Seyfried), Stark attempts a number of ways to woo her back before realising she has moved on to local businessman Foy (Neil Patrick Harris), but strikes a conversation with a new girl in town, Anna Barnes (Charlize Theron). Whilst the relationship initially serves to lament his recent loss, it quickly blossoms into friendship.

When Stark shoots his mouth off to Foy, challenging him to a gunfight which he's sure to lose, Anna schools Stark in the way of gunplay, leading to a stolen kiss. The problem is, she's already married to a notorious and ruthless outlaw, Clinch Leatherwood (Liam Neeson) who's on his way to town and keen to make his mark. 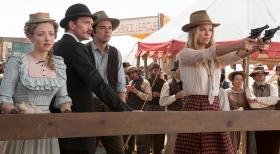 Regardless of the strength of the cast (even if they're as good as assembled here), the cinematography (which is often quite impressive) or the visual effects (even wanted to see a sheep dance? CG delivers in spades), as a comedy A Million Ways to Die in the West , lives of dies on the strength of its gags.

Unfortunately, I must admit I found many of them lacking. Whilst Seth McFarlane's Family Guy isn't generally known for its highbrow humour, A Million Ways lazy reliance on a combination of bodily fluid, dick and sex jokes, which are frequently telegraphed way in advance is disappointing and clearly not up to standard.

To compound issues, one of the film's rare genuinely inspired moments; a cameo which features actor Christopher Lloyd reprising his role as Back to the Future: Part III's Doc Brown was already spoiled in one of the theatrical trailers which leads me to my biggest criticism, even if it's not isolated to this film. 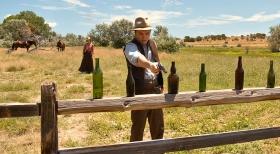 Sadly, A Million Ways to Die in the West suffers from the age old problem of revealing the best jokes and beats in the theatrical trailer; which subsequently feature a substantially higher ratio of laughs per second. Plus they're free.

Made for just $40 million, I highly doubt that A Million Ways to Die in the West is in danger of failing to make back its production and marketing budget. But a production from such a known, generally reliable pedigree of talent, a low benchmark shouldn't be the aim. It's not all bad - it's certainly entertaining and there a few good laughs to be had, however it's just not the kind of thing you need to rush out to cinemas to see immediately. 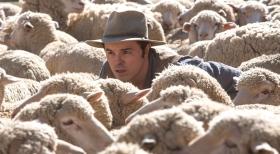 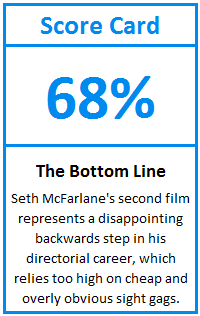