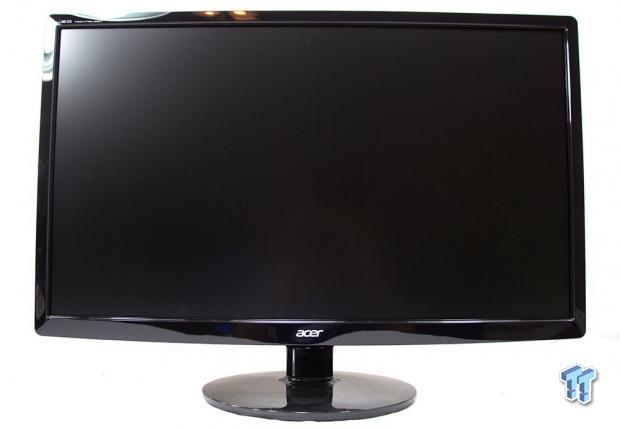 Welcome to TweakTown's return to regular display reviews. I will be your guide and host on this wonderful trip through display heaven. To start our return back to display reviews, I have in the lab a general purpose monitor from Acer.

We will be looking at the 24-inch S241HL bmid monitor from Acer. As part of this review, we will be introducing our testing regimen that will be used to test and rank monitors. As we are just starting back at this, the regimen is subject to change.

The S241HL bmid is a 24-inch LCD widescreen display. The panel features the standard 1920 x 1080 resolution that most have come to expect from a monitor of this size. The panel itself is of the Twisted Nematic Film (TN Film) variety, which means that color reproduction will not be as strong as an IPS monitor, but the cost of the monitor will be quite a bit less than an IPS display.

Being of the TN variety, viewing angles are not as good as other monitors on the market, specifically IPS-type monitors. The more off-center you view the monitor, the darker and more off the colors will become. Acer says that this panel has a horizontal viewing angle of 170 degrees and a vertical viewing angle of 160 degrees.

The stand for the monitor is capable of articulating the viewing angle, but it does not feature the ability to pivot or change height. The monitor is backlit with white LED light, which makes this monitor fairly efficient and bright.

Regarding the technical specs, the S241HL bmid features a maximum refresh rate of 60Hz, a response time of 5ms, a contrast ratio of 100,000,000:1, a rated brightness of 250 Nits, and support of 16.7 million colors. On the connector front, it features VGA, DVI, and HDMI inputs. The monitor also has built-in speakers.

Acer lists the monitor at $179.99, but you can find current market pricing below.

PRICING: You can find the Acer S241HL bmid monitor for sale below. The prices listed are valid at the time of writing but can change at any time. Click the link to see the very latest pricing for the best deal.

As far as packaging goes, the S241HL bmid was shipped inside of a white and green box that covered the more important aspects of the monitor. 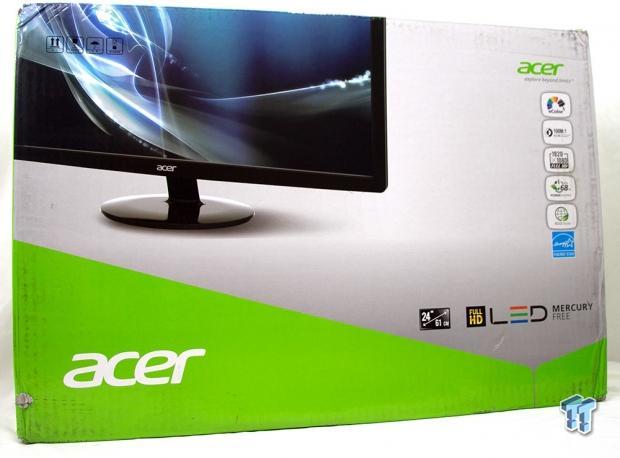 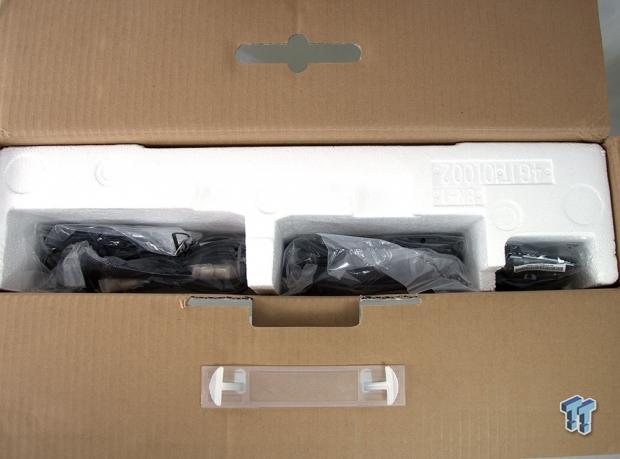 Below, you can see everything that was included in the box and roughly how it was all packaged. 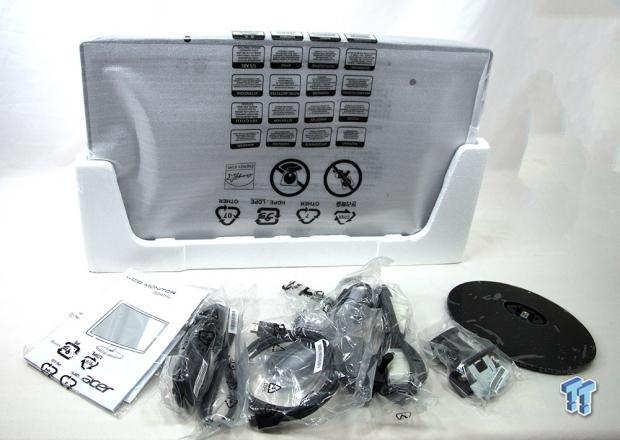 Moving onto assembly, you can see that we are dealing with three separate parts. Assembly is quite simple, but it requires both a Philips screwdriver and flat blade screwdriver. First, you slide the bracket, seen in the bottom left, into the monitor and tighten down the screw on the monitor. 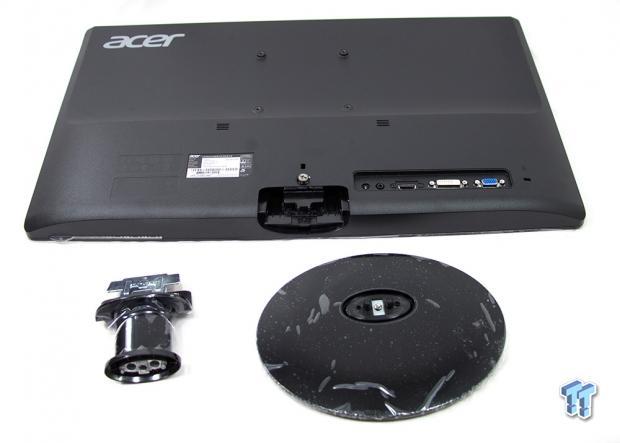 Then, you simply put the base onto the bottom of the bracket and tighten down the screw with a flat blade screw driver. 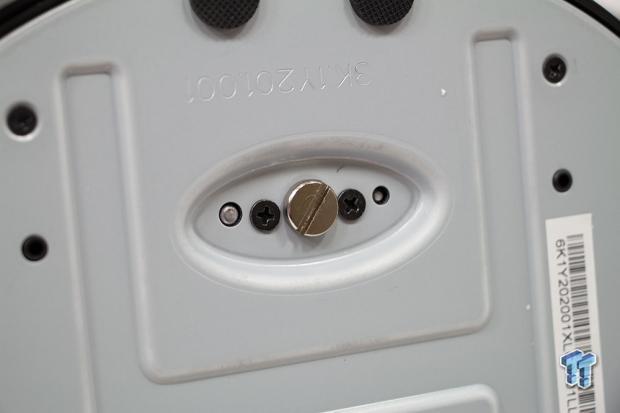 This is one of the few complaints I have with this monitor. Acer really should have used the same screw head in both locations. 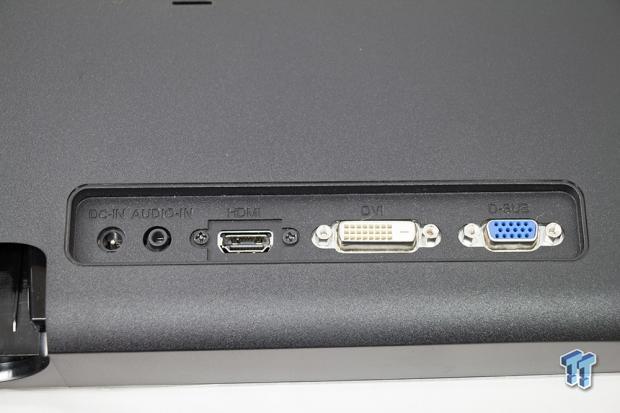 From left to right, we have the DC-in (power) jack, the audio-in jack, and the HDMI, DVI, and D-SUB ports. 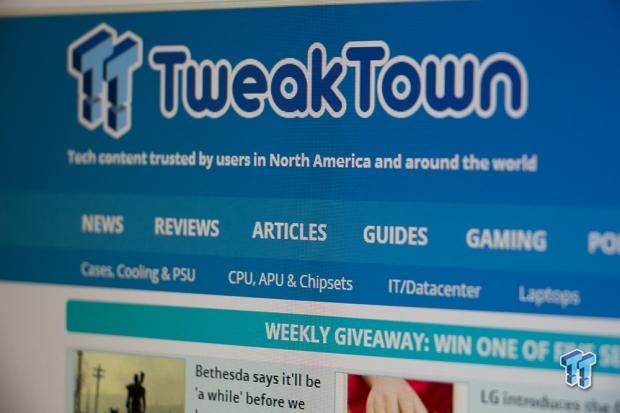 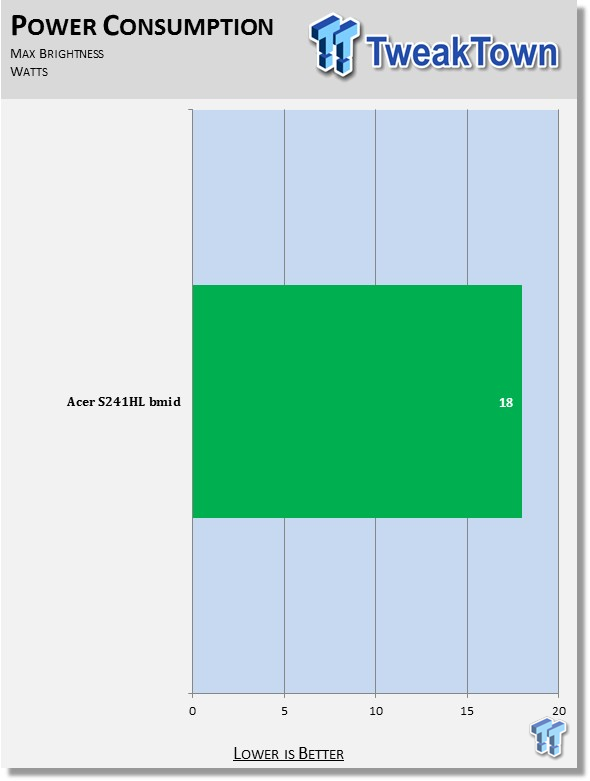 Since this is our first monitor review, we really don't have anything to compare it to. The Acer S241HL bmid consumed 18 watts in our test. 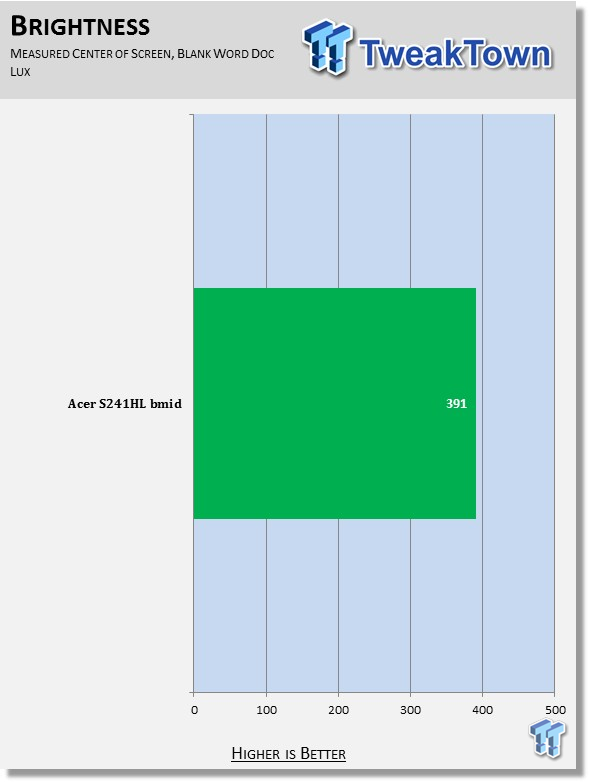 As you can see in the chart above, the Acer S241HL bmid produced a brightness of 391 lux. 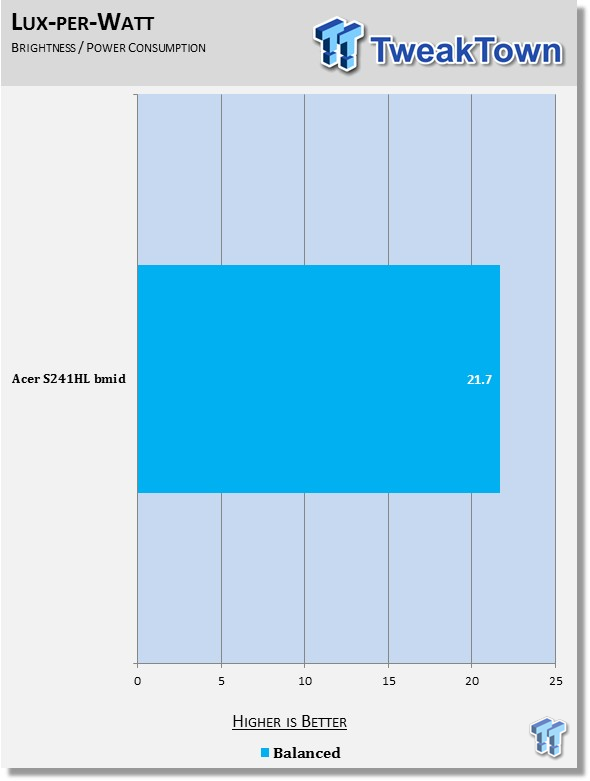 Let's start with the bad and then talk about the good. As far as complaints or concerns go, I only really have three. I've been using this monitor for several weeks now and only really have one complaint related to my use: if you turn the monitor off fully to conserve power, then the monitor takes a long time to start up.

I've already addressed one of my other complaints towards the very beginning of this review, but I'll restate it here. During assembly, I had to use two different types of screwdrivers. It's not a huge deal, but sometimes the little things really are the things that matter. It's a simple fix and it's not clear why Acer's engineers didn't do it from the start.

Finally, my last concern is in regards to the monitor's VESA mounting. As you can see in the picture below, the mounts are located in a recessed location on the back of the monitor. This, coupled with the fact that the ports project out the back as opposed to the bottom, leads me to believe mounting options will be limited. I foresee that the monitor would only be useful on an articulating arm and likely wouldn't work with a flat mount against a wall. Unfortunately, I didn't have a mount handy to check, so it is possible that I am wrong regarding this, but it is something you should definitely look into before purchasing if you are planning to mount the display flat on a wall.

On the flip side, I really like the way the ports are oriented horizontally on the back as opposed to vertically out the bottom. It makes connecting up the wires a breeze.

Overall, my impressions with the Acer S241HL bmid have been positive. The display really works quite well, produces a nice image, and won't break the bank if you are in the market for a mid-range, middle-of-the-road display.

PRICING: You can find the Acer S241HL bmid monitor for sale below. The prices listed are valid at the time of writing but can change at any time. Click the link to see the very latest pricing for the best deal. 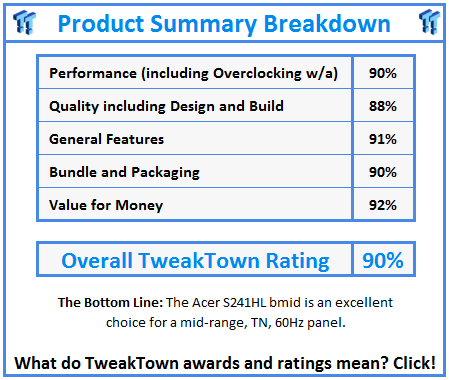