We're barely six weeks into 2014, and Hollywood has already launched its first big budget remake of the year, ahead of a raft of sequels and reboots that will inevitably follow in the traditionally safe summer blockbuster season. RoboCop circa 2014 is a black horse, however, abandoning much that makes it still memorable today in favor of a more populist, slick, and toned down re-imagination. Will this decision have fans up in robo arms? Read on. 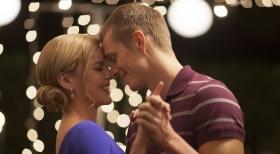 The year is 2028 and drone technology has improved to the point where mechanized robots patrol previously violent hotspots around the globe--everywhere except for the United States, thanks to the obstructions of Senator Dreyfuss (Zach Grenier).

OmniCorp CEO Raymond Sellars (Michael Keaton) continues to lobby for the domestic rollout, in order to strengthen sagging profits, and seizes his chance when Alex Murphy (Joel Kinnaman), one of the few good Detroit cops, is mortally injured in an explosion. With this event, Sellars has all the ammunition he needs to sell the benefits of his controversial program by putting a thinking man inside an OmniCorp battle suit. 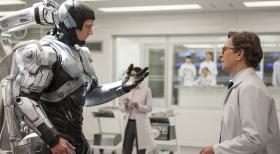 Rights holder MGM and Sony Pictures have toiled away for a number of years to bring the RoboCop reboot to fruition and they can't be accused of sitting on the laurels as far as any justification goes. The changes to the origin story are deeply rooted in reality and encompass thought-provoking moral dilemmas such as modern warfare, artificial intelligence, and at what point does someone scientifically cease to be human.

Still, there are olive branches to fans of the original, with homages including "I'll buy that for a dollar," the impossibly designed ED-209 mechas, and even a surprise update of Basil Poledouris' theme tune. 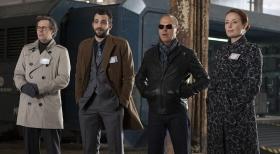 Much of the criticism levelled at the film revolves around the eschewing of the hard 'R' rating of the original, which reveled in blood, severed limbs, and language, one that even after 25 years still has the power to shock. RoboCop 2014 is a much more sanitized and accessible feature, which admittedly pushes the boundaries of a PG-13 even if it doesn't make sense (a mass shootout is played in the dark with bad guys donning infrared glasses, ignoring that RoboCop's visor is similarly equipped), but results in a significantly different tone and end product.

However, to be fair, I don't necessarily agree that RoboCop needs to be ultra-violent to carry the franchise name, although perhaps I just don't hold the original that close to my heart. 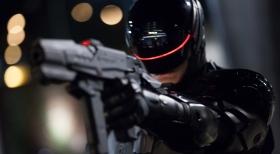 Despite my general antipathy to the deluge of reboots and the like, it's hard to ignore the obvious efforts and well-meaning intentions both in front of and behind the camera. Still, I can't help but feel that something is 'off', and the writers have not capitalized enough on the moral questions the film raises.

Ultimately, RoboCop just isn't that engaging; it's a sugar hit of effects that won't have much longevity, it's gotten fans of the original instantly off side, and, at the end of the day, it's just not a property that needed to be remade. Its worst crime, however, is that it put my girlfriend to sleep, and that's a damning indictment. 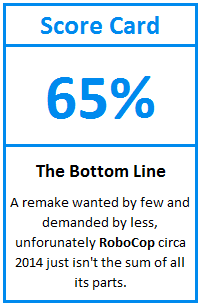