It's a perennial truth that kids love dinosaurs. I suspect it's something about the ruthless nature, and overbearing bulk of creatures past, which stands in stark contrast to the diminutive size, but vivid imaginations of youngsters. As such, the subject matter has been an evergreen favorite of Hollywood from Jurassic Park and We're Back: A Dinosaur Story, to The Land Before Time and Disney's Dinosaur, to name but a few.

While the film takes its namesake from the incredibly successful 1999 BBC series Walking with Dinosaurs, in truth the film has very little in common with the documentary. It's certainly something that the film's worst crime is not even the dinosaurs 'talking' with an inane and unrelenting stream of consciousness. The film's worst crime is that it takes the intelligence of children older than five years old for granted. That's not just a crying shame; it's a wholly missed opportunity, and a smack in the face to fans of the franchise. 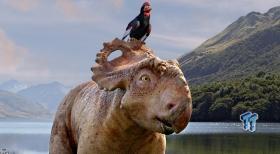 As seen through the eyes of a prehistoric bird named Alex (Voiced by John Leguizamo) : Walking with Dinosaurs follows a herd of Pachyrhinosaurus, and its youngest offspring, Patchi (voiced by Justin Long). Alex and the herd are navigating to greener pastures following a winter migration, whilst seeking to avoid the numerous threats, both environmental and predator alike; including the vicious Gorgosaurus. Along the way, Patchi will need to grow up, find love, and deal with the inevitable power struggles inherent in steering the herd to safety. 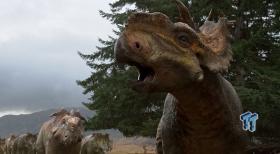 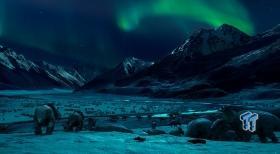 My expectations for a Walking with Dinosaurs movie were admittedly quite high. I was quite the fan of the original series growing up; its mix of animatronic and computer generated images was superb (especially accounting its relatively lower television budget), and its documentary style of storytelling and informative prowess were second to none. The television series even came complete with a rousing orchestral score by Ben Bartlett, which stands alone as a spectacular and soaring performance in itself. The film version shares absolutely none of these attributes. Bizarrely, the film is even bookended by a brief live action segment featuring actor Karl Urban as a paleontologist, with two tag-along kids, whose dubious contribution to the film is a head scratcher. 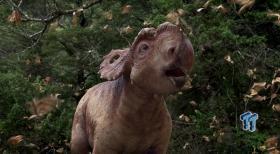 I understand that the original production plan for Walking with Dinosaurs was to create an entirely silent and brutal 'fly on the wall' adventure, which would have stayed true to the series, with updated and more spectacular visual effects. Obviously, at a certain point the intent altered significantly. Whilst the computer graphics are relatively impressive, the dinosaur designs are heavily anthropomorphized; exaggerating features for cutesy appeal. The awful voice work and narration is ceaseless, and really undermine the visuals. Worse, I'm certain that all of the key plot points could have been conveyed without any of them. However, if one looks hard enough, there are flashes of the film's grownup origins scattered throughout. Thankfully, no attempt is made to animate the dinosaurs' lips. Perhaps a saving grace would be for the home video release to include an isolated sound effects and music track.

Sadly, I can only assume that someone in one of the film's production companies ran the figures, and thought the film could do better as a heavily targeted kid's film. The international grosses thus far would seem to heavily indicate otherwise. 14 years ago, Disney similarly dumbed down their originally more adult Dinosaur, and that effort is hardly seen as a classic of the animation company. Cruelly, it's still a better film than this. What a tragically missed opportunity. 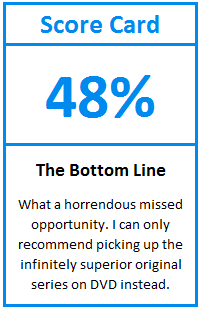