Framed as a response to the decision to film the feature film version of Thunderbirds with live action actors, rather than return to the quaint puppetry of the original 60's Gerry Anderson TV show, Team America: World Police became an absurd and over the top exercise in crassness, that underneath the dick jokes, vomiting and admittedly hilarious sex scene, also acted as a reaction to the controversial United States military action in Iraq and Afghanistan, which was unfolding at the time of release, along with the pathetic aggression of the then North Korean leader, Kim Jong-il.

While Team America: World Police has perhaps lost a little of its relevance (who can remember who Hans Blix is?), it's still a pretty damn funny film, even if it's MPAA censored theatrical cut reigns in some of the more eyebrow raising obscenities. 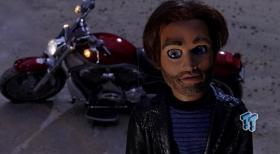 Of note is that version of the film presented on this Blu-ray release is the original theatrical release and note the later 'uncut' version released to DVD. While of course both cuts could have been presented via seamless branching technology, this just goes to the heart of the overt cheapness of this Blu-ray release, which I'll now elaborate on...

Clearly emanating from an old transfer of a questionably quality controlled print, Team America: World Police looks downright disappointing in its Blu-ray debut. With frequent film artifacts, poor color timing which is a number of stops too bright, and a general softness not indicative of a film of such recent vintage, there is clearly little here to commend. Rather than a crisp transfer from the films interpositive, Team America: World Police shows all the hallmarks of coming from a second generation release print - the same that would have been projected in a cinema.

The faintest praise that I can provide is that it does indeed look better than the standard definition DVD transfer, but a piss-poor benchmark after years of progression in Blu-ray encoding. 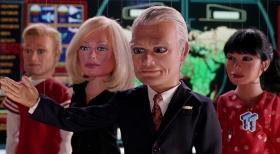 Hard pressed to not achieve less than the video transfer, Team America: World Police does indeed sound quite good in its lossless audio encode, but it's still a reasonably conservative audio mix by today's standards. The majority of the track is confined to the front soundstage, although there is a solid amount of bleep into the rears. Audio sync is a misnomer considering the puppetry utilized. Subwoofer use is adequate, but mostly takes on a rumbly and indistinct sound, rather than a tight response.

Overall, a reasonable track, but certainly nothing to write home about. 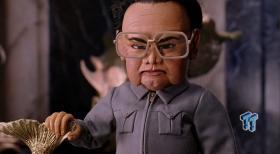 Sadly, there are no extra features at all to speak of, not even the special features created for the 2004 DVD release. Pathetic, but unsurprising considering the general lack of care evident in every other aspect of this release. I feel like I put more effort into my review than Paramount did in this Blu-ray release. 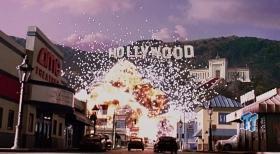