Disney have had a hard time these last few years, with some deep soul searching regarding what the company stands for. Under the leadership of Michael Eisner, the company ceased producing traditional animation features in 2004. But following the corporate upheaval which saw Eisner ousted in 2005, Disney vowed a return to traditional animation, along with the acquisition of Pixar animation studio, but since then have only released two traditionally animated features, along with three computer generated features. 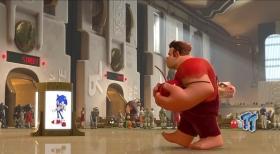 Set inside the world of arcade games, Ralph, (John C. Reilly) the adversary of the arcade hit 'Fix It Felix Jr', has become tired of playing the thankless task of the bad guy in the Rampage inspired game and decides to go 'turbo'; that is, jump from the confined world of 'Fix It Felix' to the first person shooter 'Hero's Duty' where he obtains the accolades and medal that he's been longing for.

Unfortunately for Ralph, porting out has unleashed a fearsome Cy-Bug, which has the power to obliterate any virtual reality world it infests. In doing so, Ralph continues to live up to his name, but the consequences of his latest actions may mean the obliteration of every game in the arcade, and the denizens that inhabit them.

Filled with an array of video game characters including Bowser from Nintendo's Super Mario franchise, numerous characters from Street Fighter, Pac Man and Sonic The Hedgehog, Wreck-It Ralph already has an in-built fan base of video game lovers and many have responded well to the film. It's clear that the filmmakers are big fans, too. In many ways Wreck-It Ralph is one giant homage to the games of old, and the juxtaposition between them and modern franchises such as the fake Call of Duty rip-off Hero's Duty. At one point Ralph asks "when did video games become so violent and scary?", a question many who grew up with the blue skies and upbeat tunes of the Sega Mega Drive may also ask. 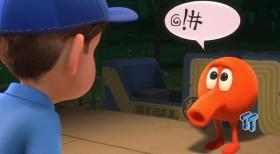 Wreck It Ralph is presented in the aspect ratio of 1.78:1, encoded with AVC MPEG-4 compression.

Barring only one recent CG animated Blu-ray that didn't fare so well in the video stakes (for those interested, it's Megamind, we've become so accustomed (and perhaps rightly so), to expecting perfection with CG animation that we take for granted that such perfect video origins will automatically result in a perfect 2k encode. However, I'm glad to say that Wreck It Ralph doesn't buck the trend.

With a swathe of color and motion, Ralph was born to succeed on Blu-ray, its character design and layout made to encode efficiently and without a hitch. I suspect that when the time comes, Ralph will even upscale to 4K nicely as well. In a nutshell, I didn't detect and video nasties - the encode is pretty much as good as it gets. If Disney keep their work to the same standard, I'll be out of a job.

Wreck It Ralph is encoded with the DTS-HD Master Audio codec with 7.1 channels, at 24 bits.

The time when Disney mixed their theatrical features with wimpy and submissive 5.1 mixes is long a thing of the past. Wreck It Ralph features an incredible aggressive audio mix that's up there with some of the best ever dished out for animated fare.

Importantly, there's no issue with audio intelligibility, nor any glitches or dropouts. Disney have gone well and truly out of their way to give Wreck It Ralph a superlative audio mix that holds little back. The surround channels are kept wholly active at all times, along with some deep bass note, which frequently pervade.

The score by Henry Jackman is mixed with contemporary music, including an appropriate contribution by that Skrillex fellow that the kids love so much. 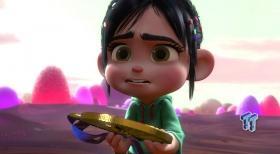 The 17 minute Bit By Bit: Creating the Worlds of Wreck It Ralph Documentary doesn't have the time to go into huge depth, but serves as breezy look at production, with interview sound bites by director Rich Moore and many of the main players. I would have liked a tad more meat on the bones, along with a deeper discussion to the choices made in utilizing video game characters, but what we have is probably sufficient for many.

The seven minute short film which featured before the theatrical release; Paperman is included in 1080p along with a 5.1 soundtrack. It's a really sweet, but heartfelt short which merges the digital world with traditional animation and represents what I think is the future for Disney animation.

Next, we have four Deleted and alternate Scenes, which would have made the film a few minutes longer. None will be particularly mourned.

Finally, we have four brief fake Video Game Commercials for the video games which feature in the movie. They're a nice touch, which mimic vintage and modern advertising with a knowing smirk. 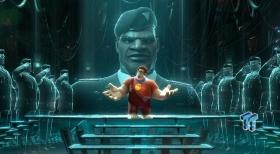