Australian made feature films are increasingly rarely high brow, and there will be precious few that won't pin point Housos vs. Authority as the lowest of the low brow. That doesn't mean it's not funny - it frequently is. But for the uninitiated, bracing yourself for the antics in store might be appropriate. 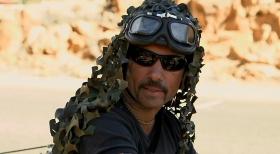 Based on SBS TV's controversial 2011 series Housos, the vast majority of the low-rent cast return for the feature film Housos vs. Authority. However make no mistake, this doesn't mean glossy camera work, explosions and famous cameos - this is very much an extended episode made with the same swiftness and penny pinching production values as the series itself, so fans will be quite at home here.

Not much has changed on the block. The Housos of Sunnyvale, welfare recipients of the low socio-economic suburb of Sydney are up to their old tricks, i.e. not much - evading the incompetent police and representatives of government welfare agency Centerlink and doing little to moderate intake of illicit drugs.

When Shazza (Elle Dawe) is contacted by her estranged mother, the gang of Franky (Paul Fenech) Dazze (Jason Davis), Kevin (Kev Taumatu) and Vanessa (Vanessa Davis) board a drug filled campervan to the Northern Territory in order to make good on her dying wish.

There's no subtlety to any of Housos jokes, with no segment of the community shielded from its mocking brand of humor. While almost all of it is crass and low brow, Housos knows its audience and plays up to expectations, freed from the constrains of TV's censorship board (even if some male genitalia has to be censored).

Love it or hate it, creator and star Paul Fenech has successfully carved out a rabid audience for this style of comedy, an extension of his previous series Fat Pizza that also culminated in a feature film. That same audience is who this film is made for. Allegedly made for a quarter of a million dollars, it was no question that the budget would be recouped with ease, but its contribution to the pooled history of Australian cinema remains naught. 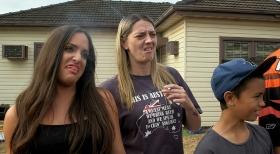 Housos vs. Authority is presented at 1080i 50hz resolution, in the film's original aspect ratio of 1.78:1, encoded with AVC MPEG-4 compression.

I couldn't ascertain how the film was lensed, but it's curious as to why the film was encoded at 1080i 50hz. It's quite possible that that was how the film was produced, but when pro-sumer gear is more than capable of progressive 1080, it's a head scratcher. As such, the interlaced transfer is instantly at a disadvantage, with vertical lines marring the image throughout, particularly affecting shots with significant movement. It also means that the film cannot be viewed on television units from traditional NTSC territories such as the United States.

This isn't the most professionally shot production in Australian history, with many scenes achieved in haste and hardly ever with professional lighting setups.

Overall, the picture isn't terribly ugly, but most people would expect movies on Blu-ray to be presented with a progressive image. That it's not is somewhat disappointing.

The subject matter doesn't really call for a bombastic surround track, which is good because we don't get it. Housos vs. Authority is a predominantly talky comedy, which lives up to the relatively low expectations I had for it. The sound design is punctuated by some over the top sound effects and with some basic ambience that leaks into the surround channels.

The bass channel is utilized to support a few songs, but lays mostly dormant throughout.

The soundtrack is punctuated by Australian rap and high-pop, primarily supplied by the Funkroars, who may be recognizable to listeners of the youth wing of the national broadcaster, Triple J. 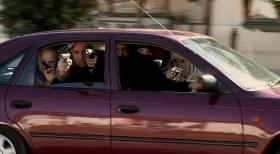 Amongst its dozens of bullet points over two menu screens, Housos vs. Authority holds around 80 minutes of extra features. I strongly dislike the lack of cohesion to the menu system along with an absence of anything resembling descriptors regarding what the items actually are. Most of the extra features are either short deleted scenes, outtakes or one or two minute interview segments from the set. Annoyingly, they all conclude with a few seconds of the films logo and a loud shotgun sound. Once the feature has been engaged, you can't press the menu button on the remote to go back to the menu. Poor disc authoring is what this is.

One of the more notable extra segments is a short Today Tonight segment, which Australian viewers will rightly recognize as the terrible info-tainment show. During the filming of this on-set feature, reporter James Thomas is roped into an awkward cameo sequence. 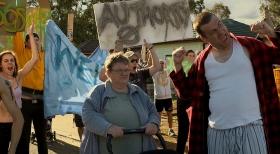