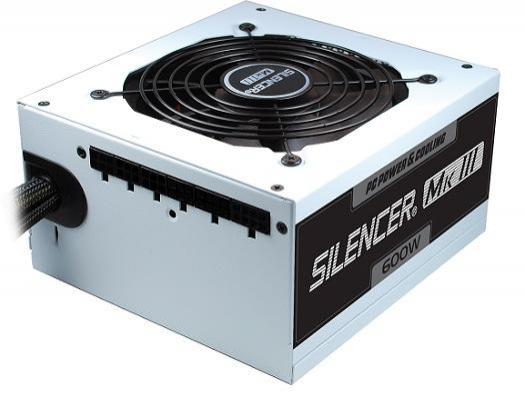 Most of our readers are very familiar with PC Power & Cooling, so we will skip right to the chase with their latest product. PC Power & Cooling has yet again revamped the Silencer series of power supplies that has become almost infamous for their performance, reliability and low cost.

This time around we have the Silencer Mk III series that comes in 400W, 500W and 600W varieties. Today we are going to be taking a look at the 600W model to see just what it has to offer.

One of the first things that you will notice is that this unit only has a single 46A 12V rail. It is becoming rare to find a power supply that isn't capable for outputting 99% or more of its power on the 12V rail, but here we have one. What it lacks in 12V output, it makes up for on the minor rails. Both the 3.3V and 12V rails are capable of 24A each with a combined maximum output of 130W. This is more juice on the minor rails than even the recently reviewed XFX ProSeries 1000W PSU. Total combined continuous output is 600W. 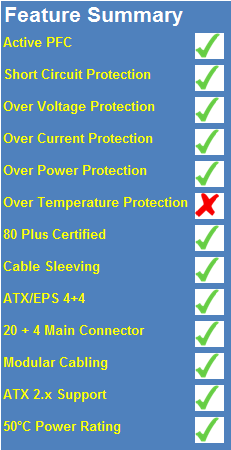 One of the many reasons that enthusiasts swear by PC Power & Cooling units is that they are always feature rich; even the lower end models. The same holds true for the Silencer Mk III series as you can see above. The unit has nearly a full suite of protections with the exception of Over Temperature Protection. The unit is fully sleeved with both native and modular cables. PC Power & Cooling rates the unit for 100% continuous output at 50C and it sports an 80Plus Bronze efficiency rating.

The PC Power & Cooling Silencer Mk III 600W has an MSRP of $89.99 and is readily available for purchasing. That is already a sweet price for the unit, but Newegg makes it even better because at the time of writing this article, you could pick up the unit for 69.99 after mail-in rebate and $5.99 shipping for a grand total of $75.98. PC Power & Cooling backs the Silencer Mk III 600W power supply with a five year warranty. 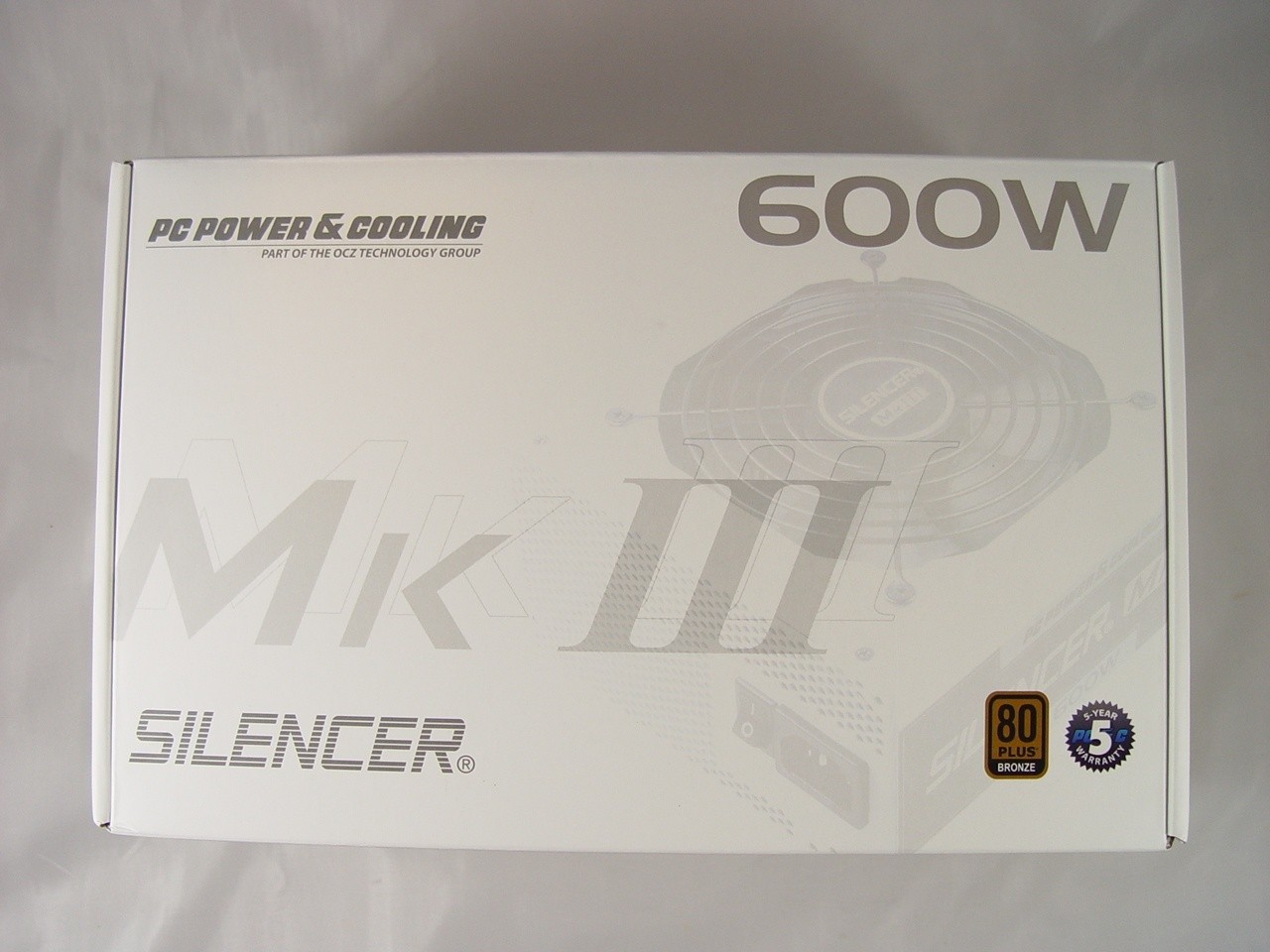 PC Power & Cooling gave their packaging a major upgrade for the Mk III as they have switched to white packaging. They keep it simplistic on the front with minimal information and a ghostly image of the unit. 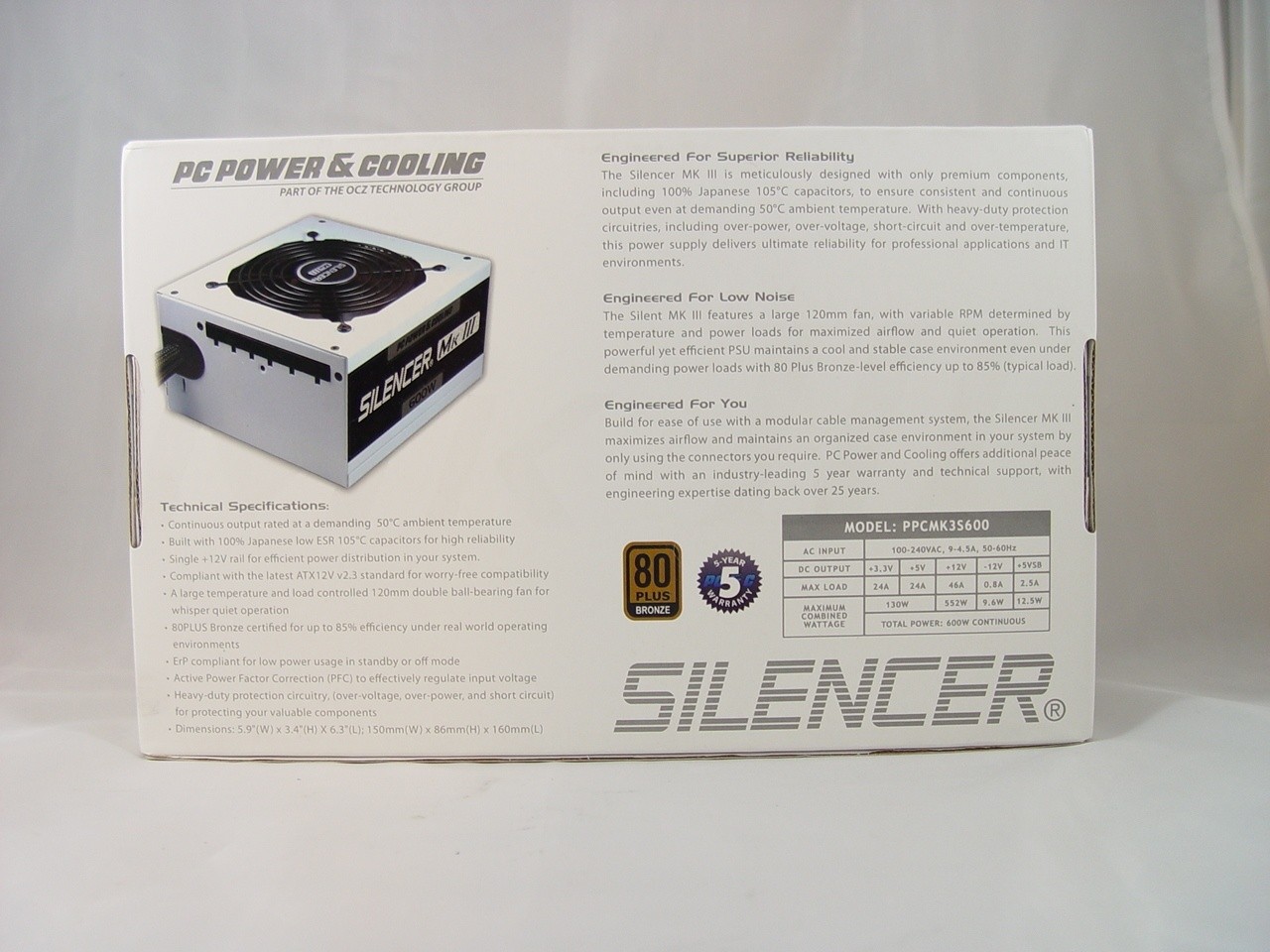 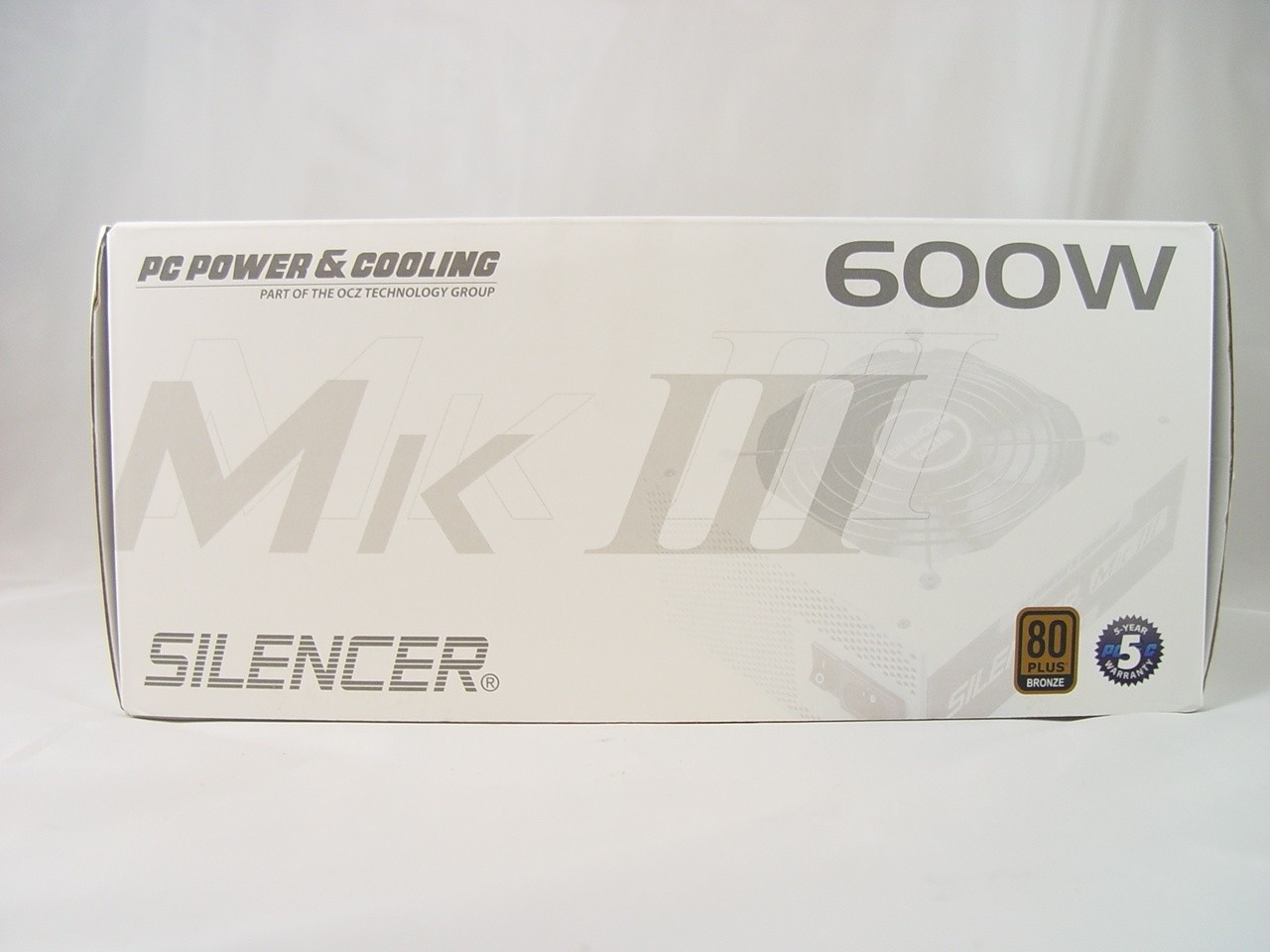 The top is identical to the front. 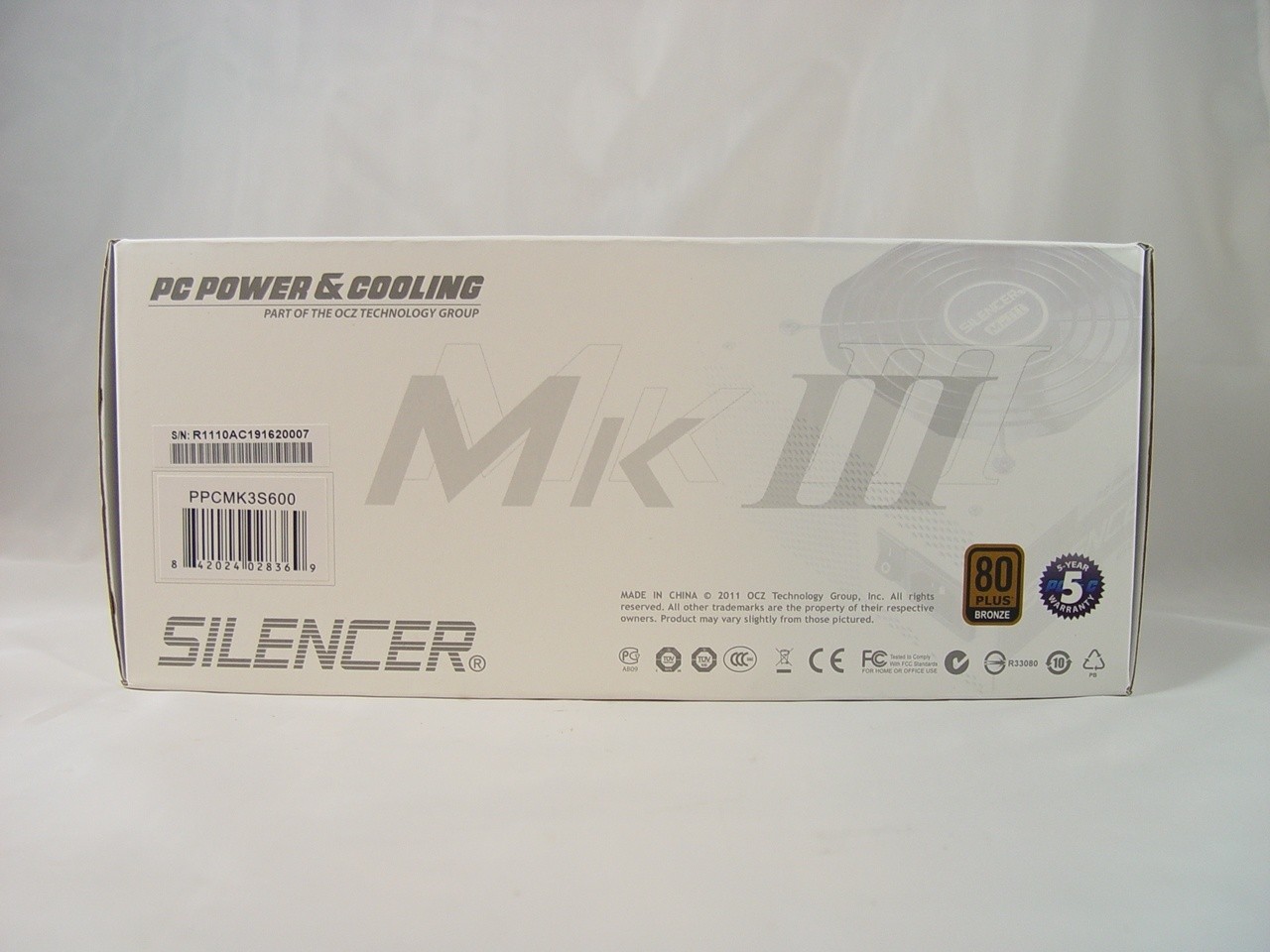 The bottom is the same with a few more pieces of information such as the model and serial numbers. 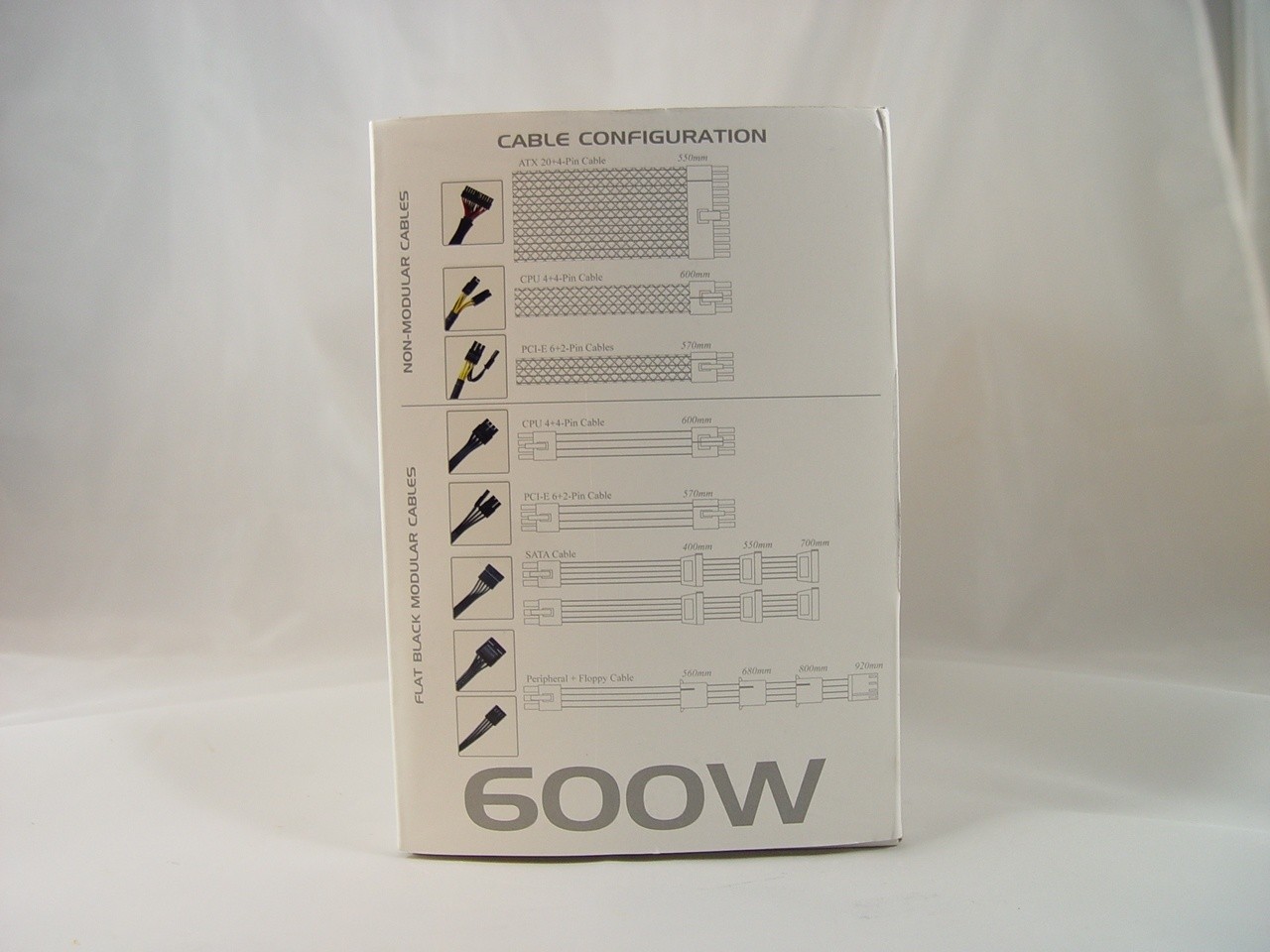 One side of the box displays a nice list of cables and connectors with lengths. 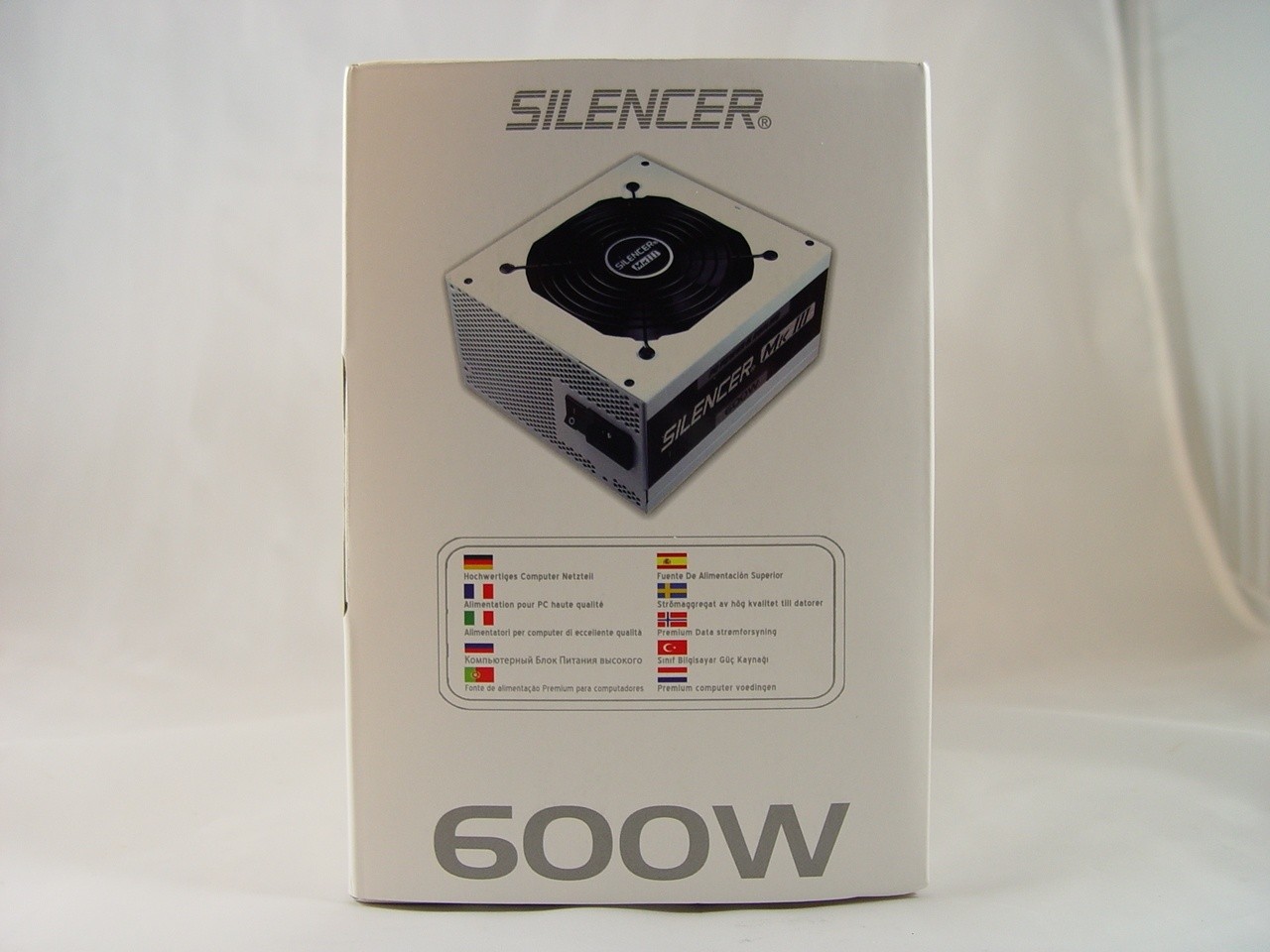 The other side is lacking any useful information, but does give a nice full color shot of the power supply. 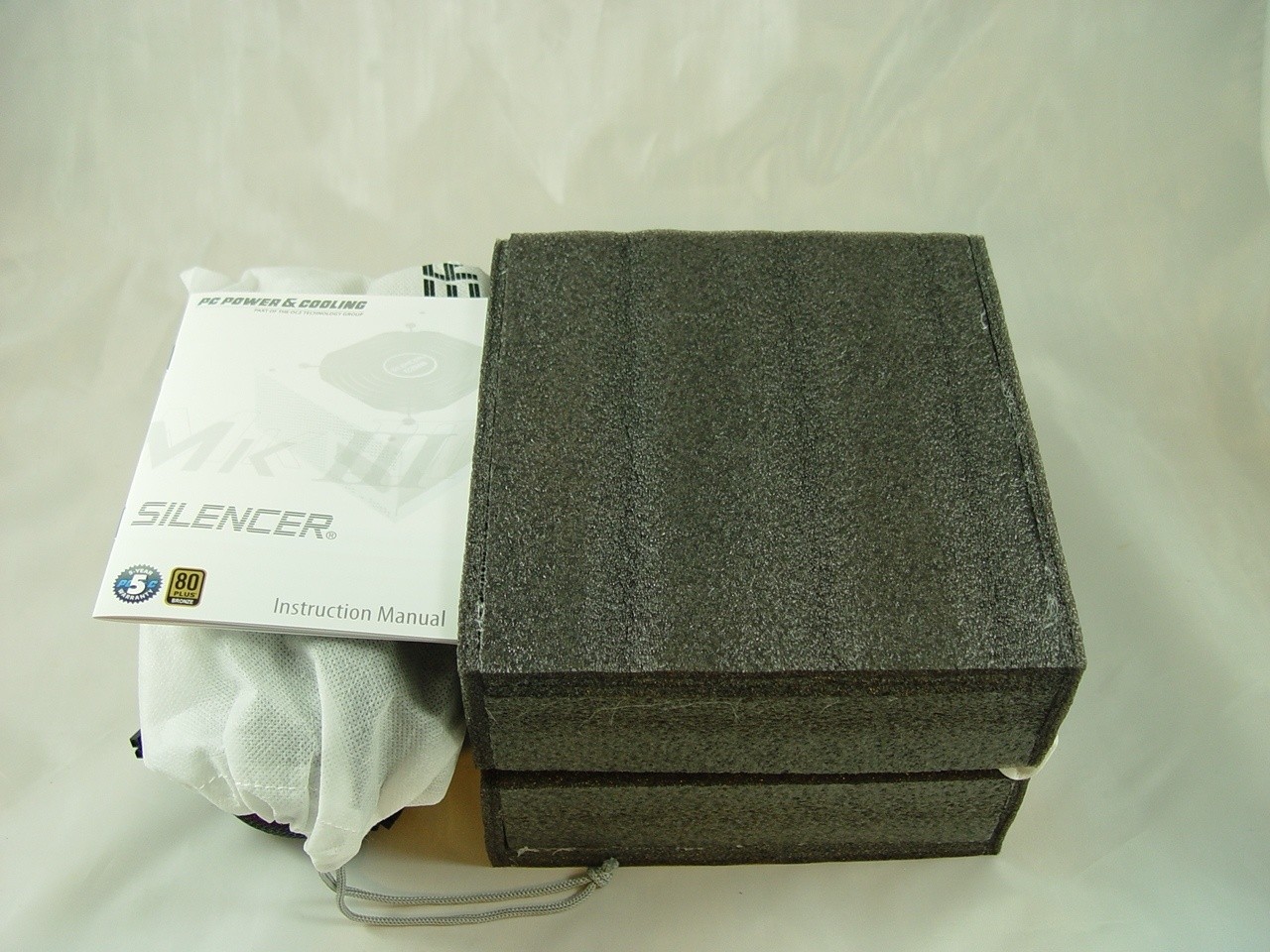 Opening the box, we find that the unit is sandwiched between a half inch of foam on all sides with the native and modular cables fitting snugly inside to hold it in place. 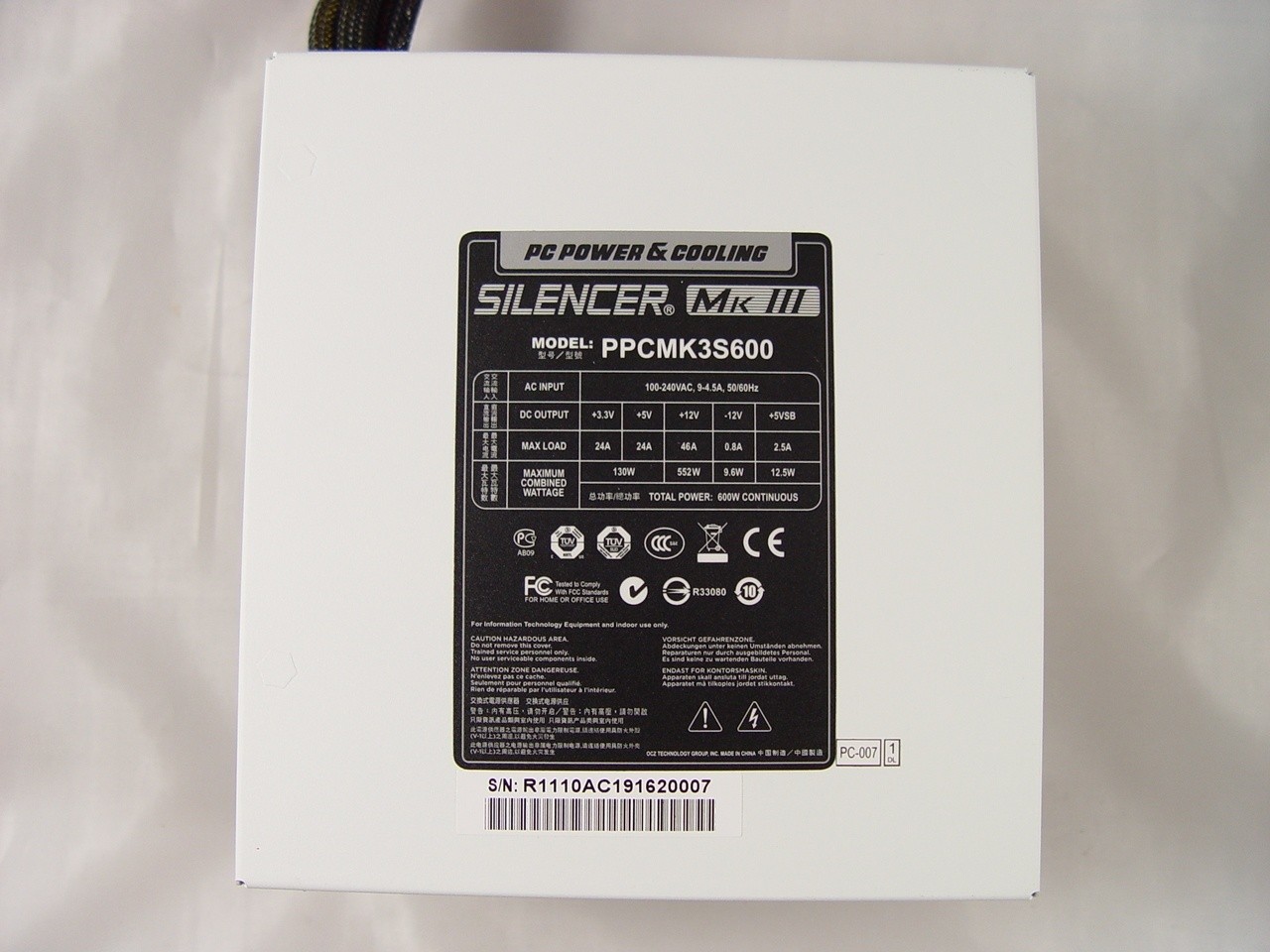 The top of the unit has become the de facto for placing the I/O specification label. 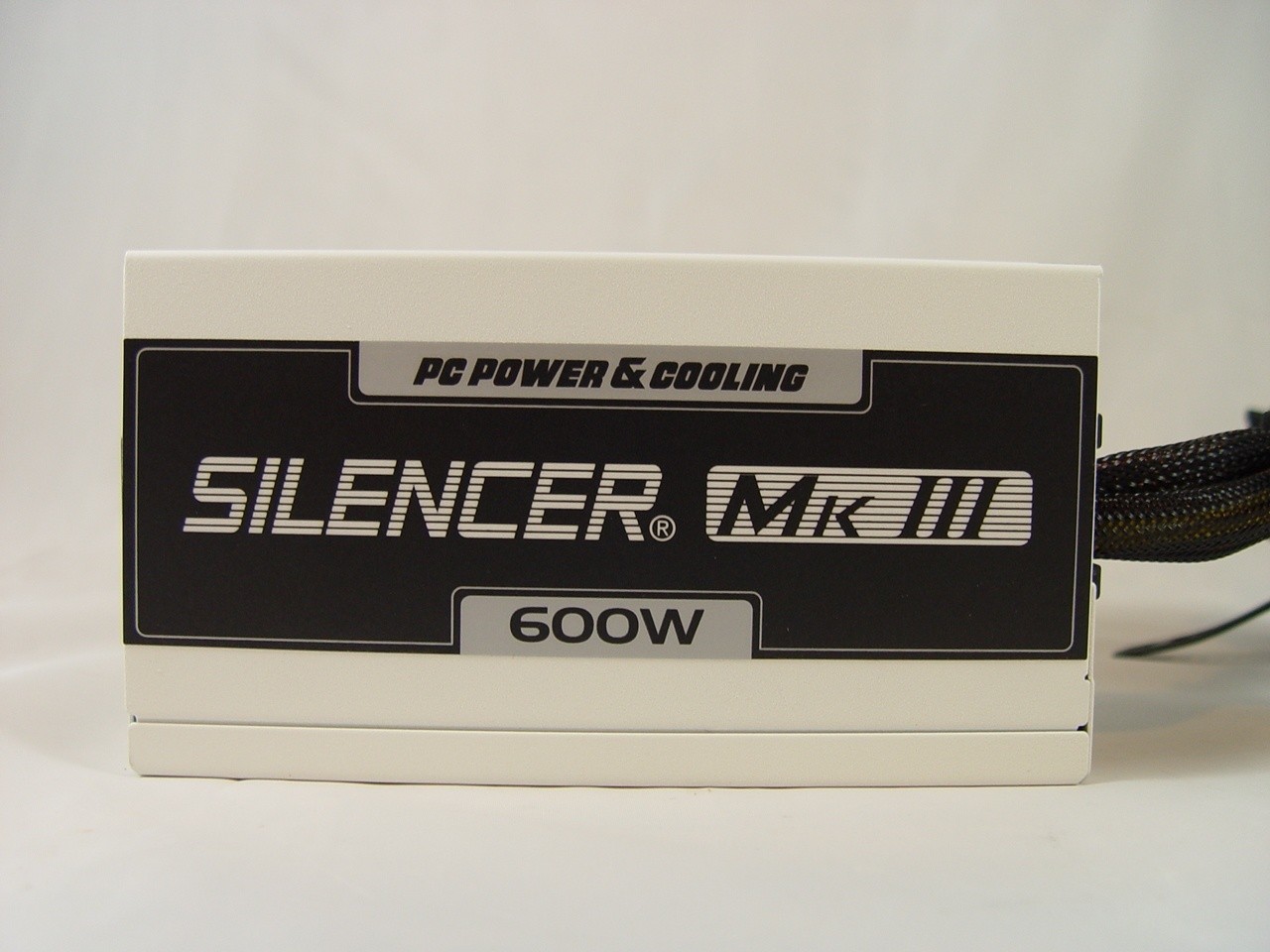 One side proudly bears the product identification label for the unit. 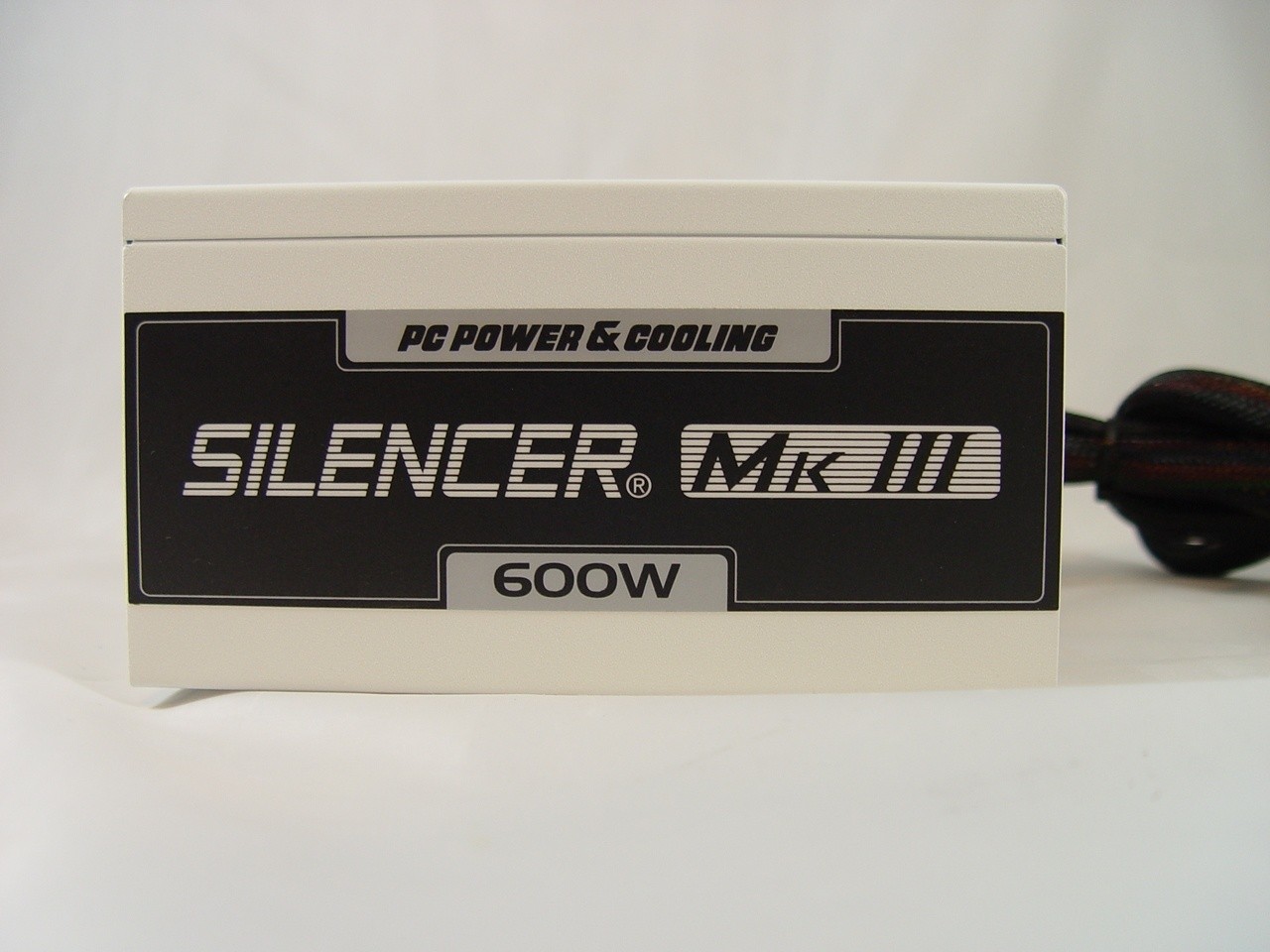 The other side is the same just upside down so that the label is displayed correctly when installed in both the top and bottom of the case. 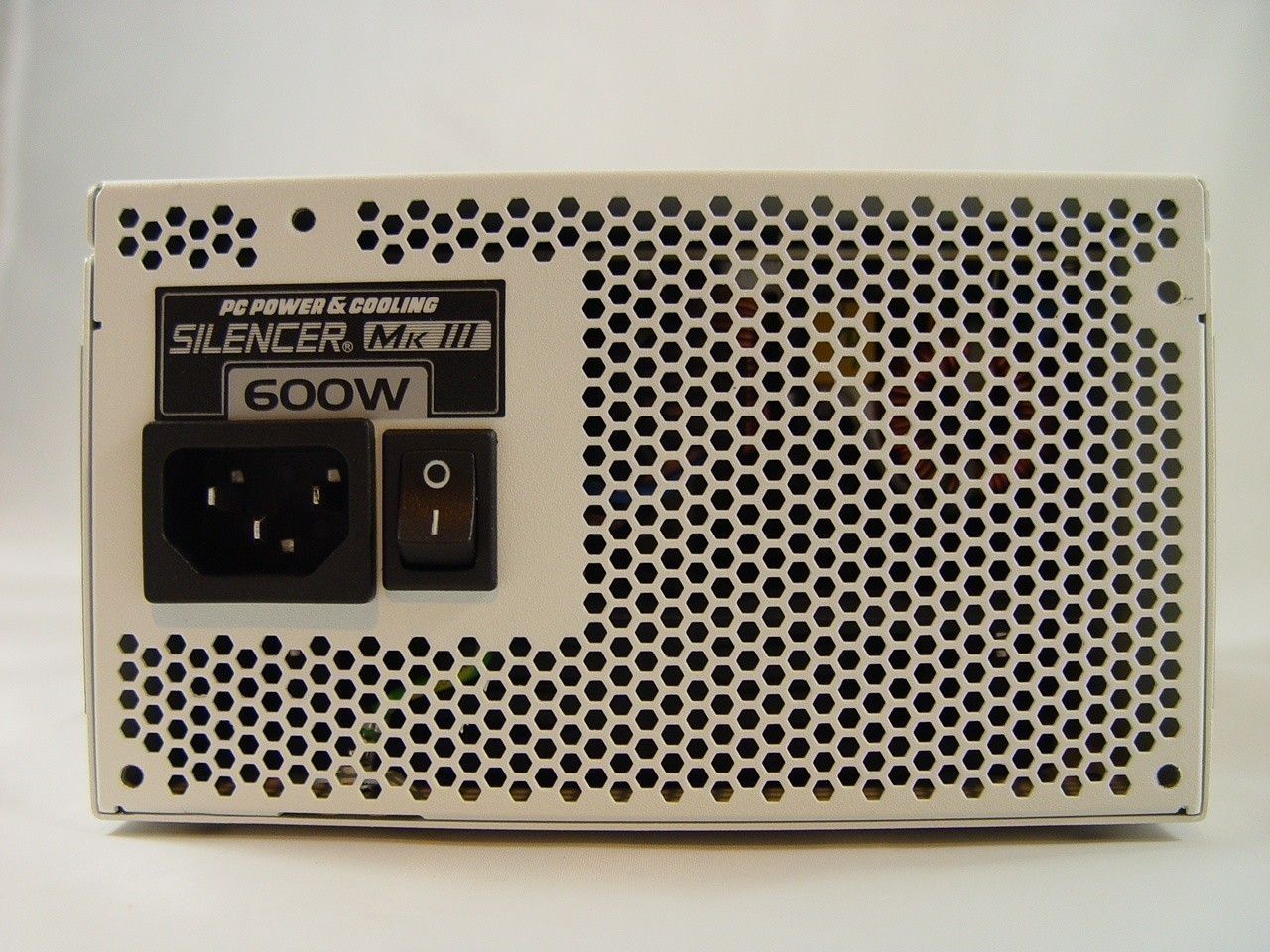 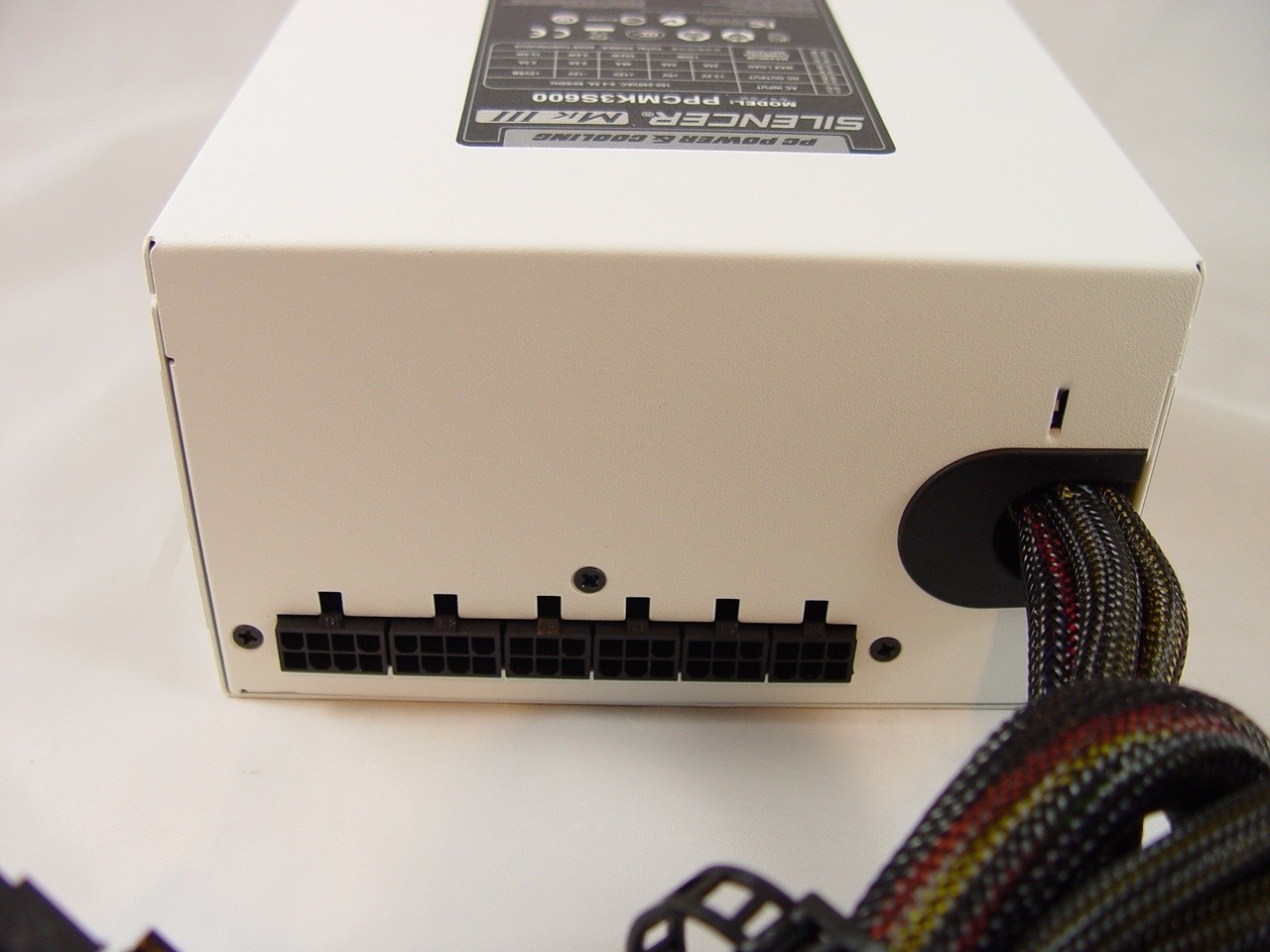 The front houses the modular connectors for the Silencer Mk III 600W unit. 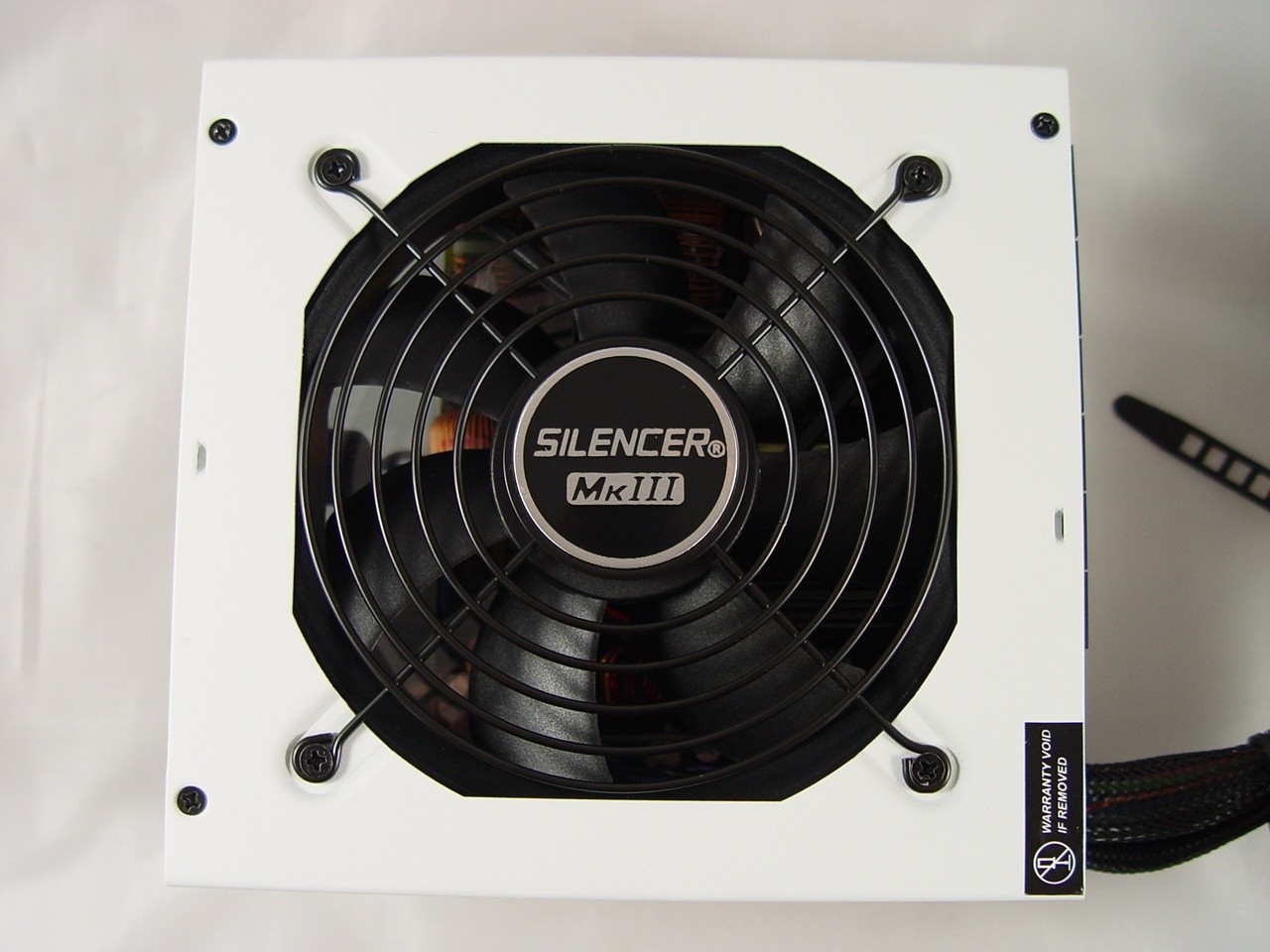 On the bottom, we find the 120mm fan with wire grill that cools the Silencer Mk III power supply. It is too bad they didn't opt for a 140mm fan instead. 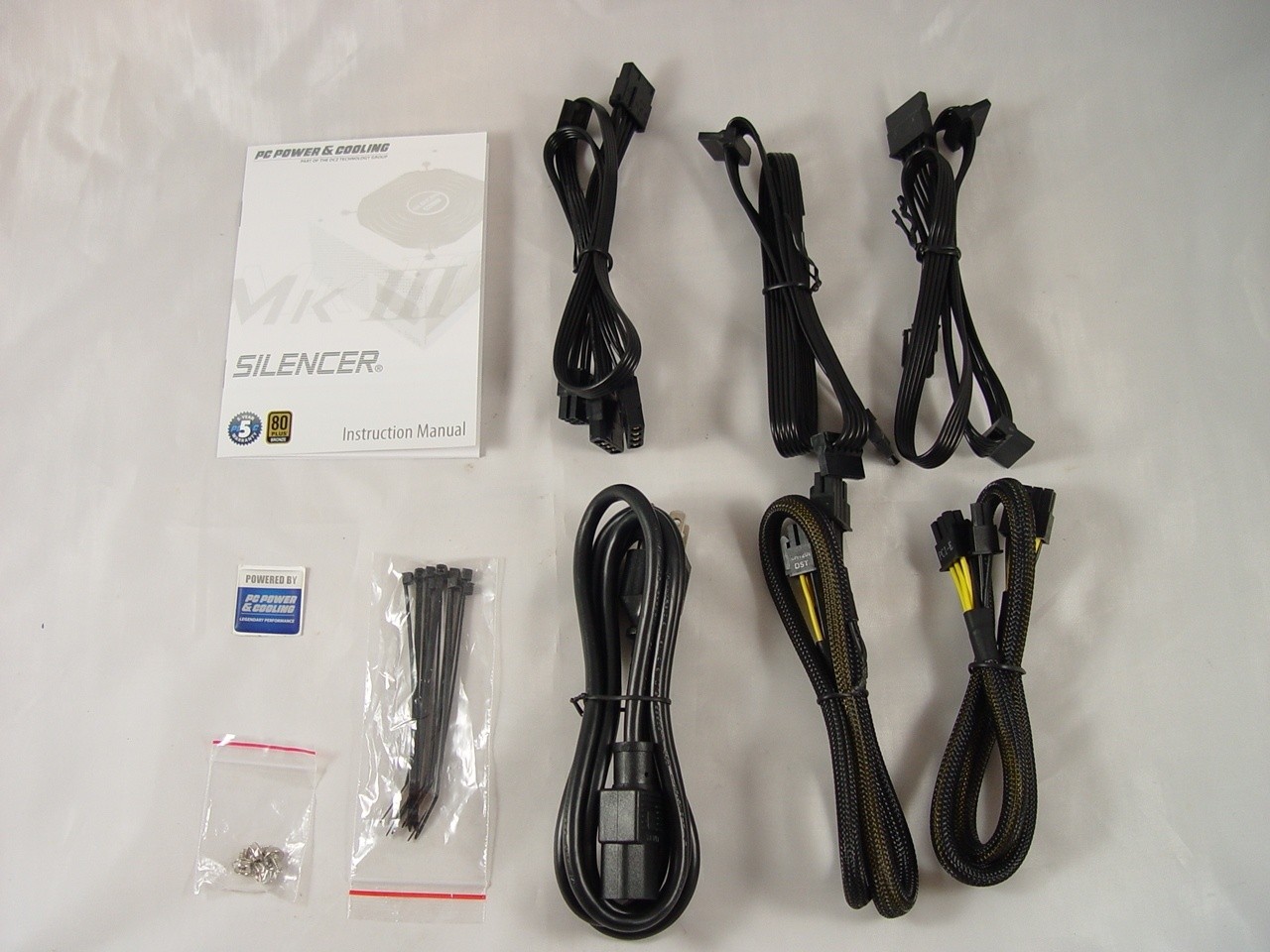 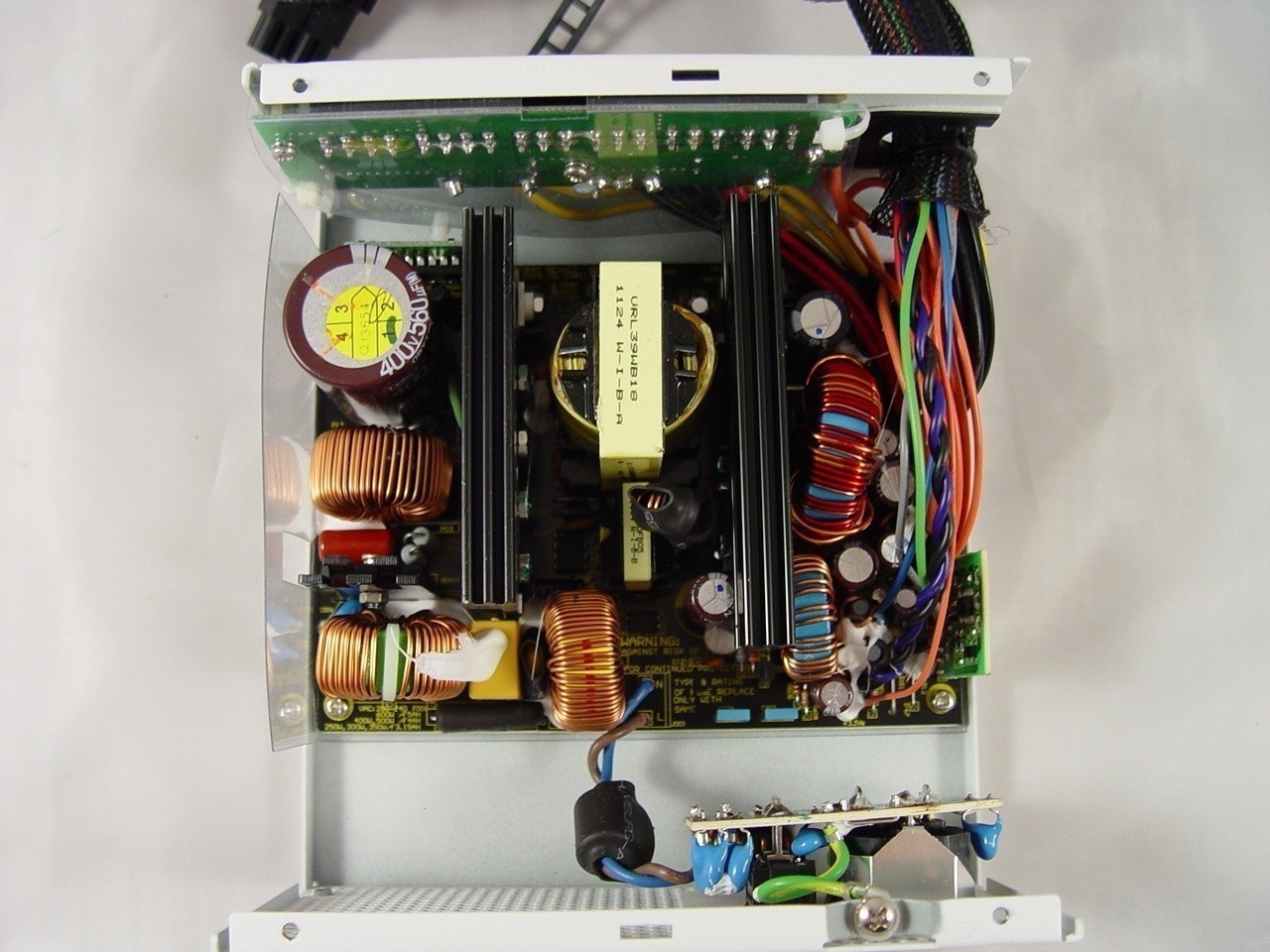 Opening up the unit, we find a very small unit. From the looks of things, PC Power & Cooling could have gone with a much smaller enclosure if they had wanted to. 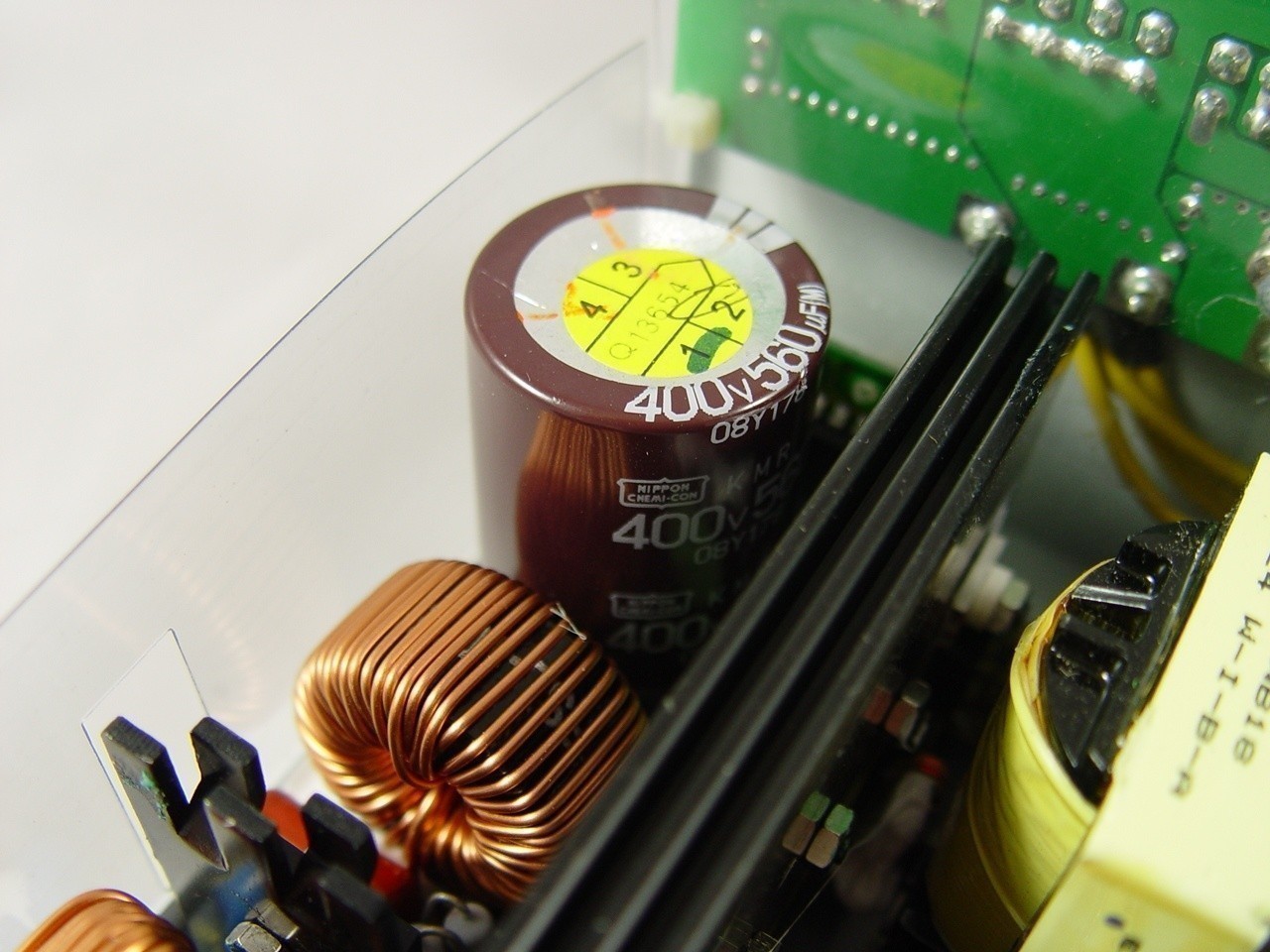 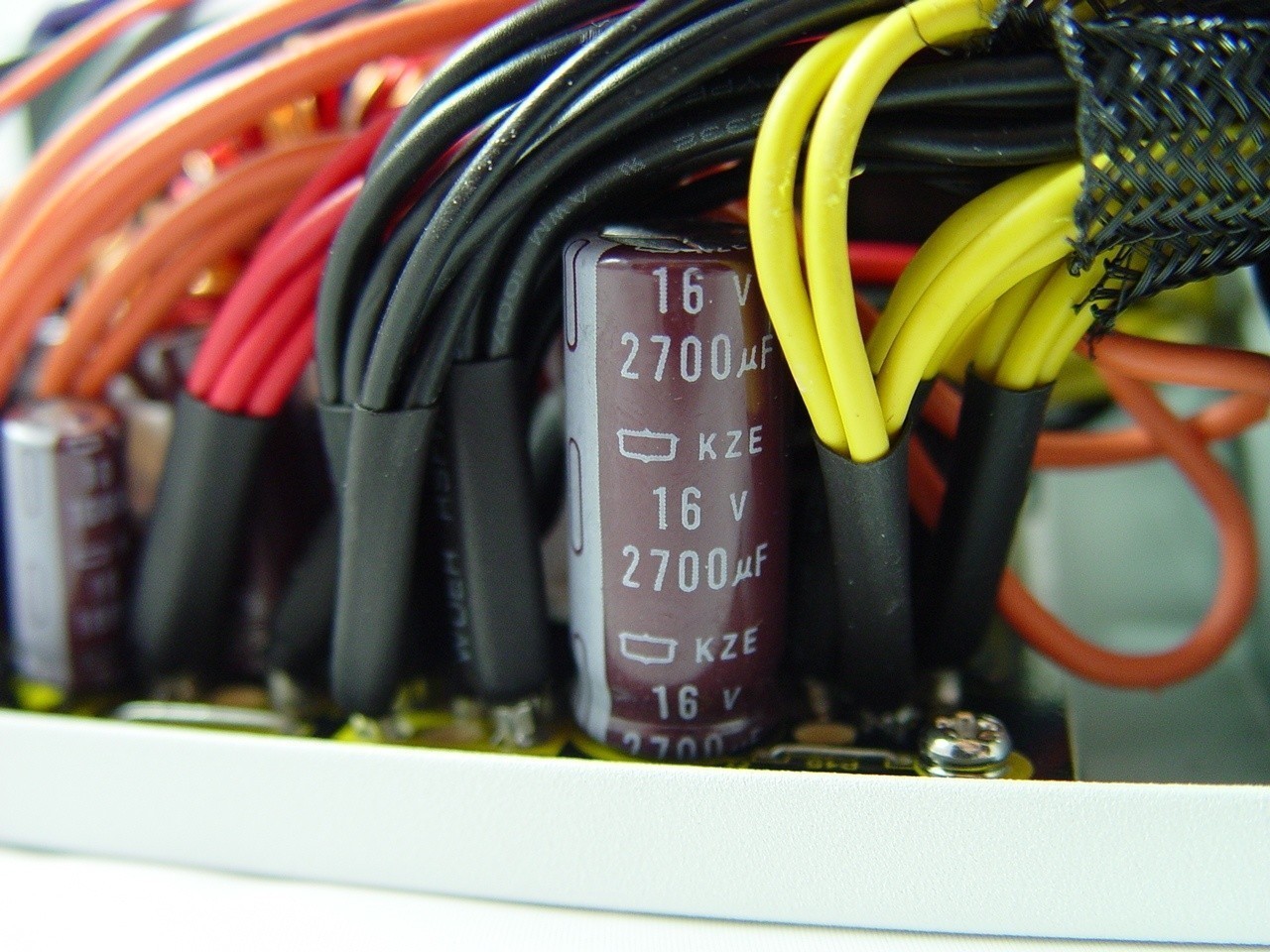 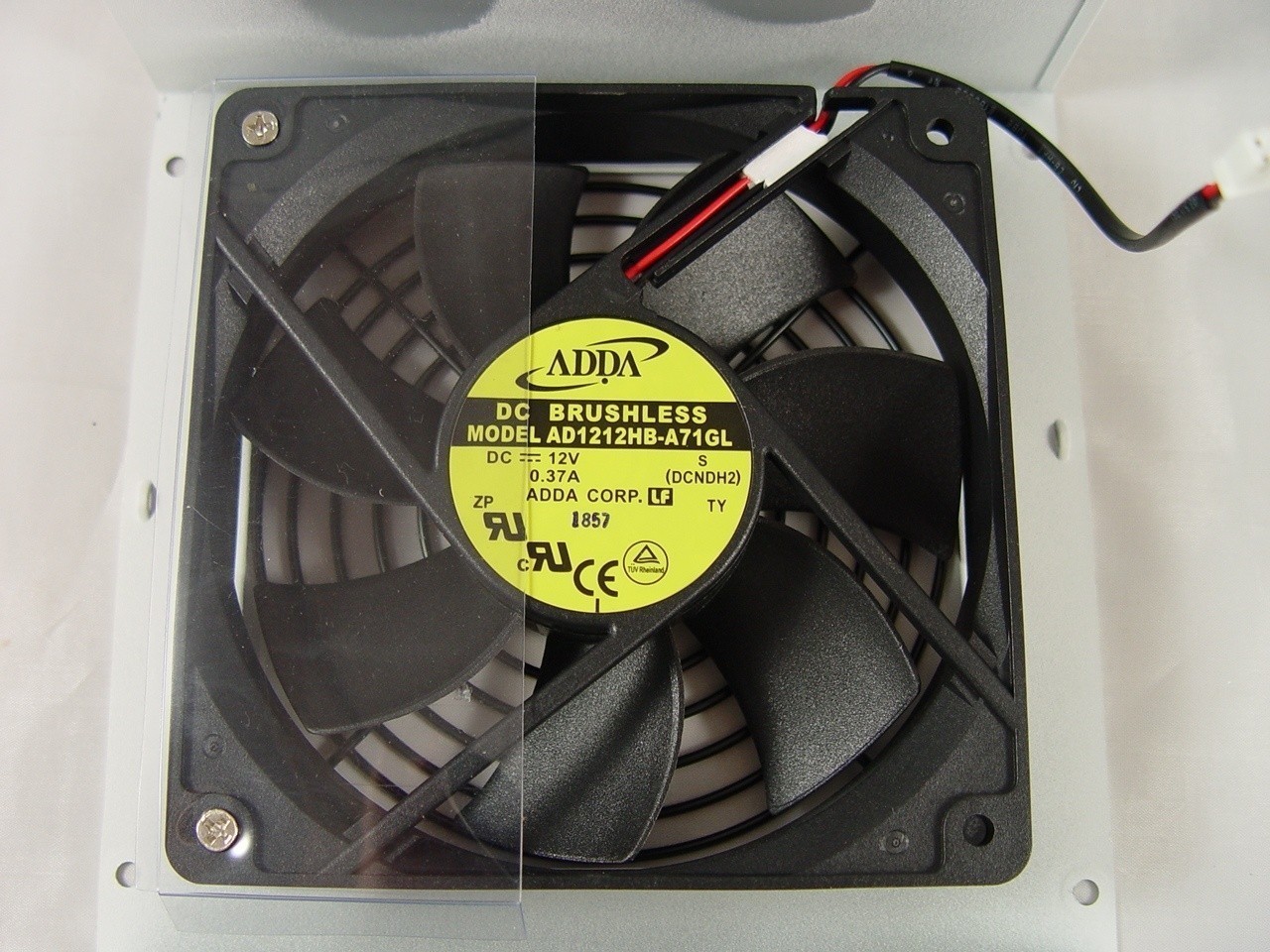 Here we find that the ADDA AD1212HB-A71GL fan is what provides the active cooling for the Silencer Mk III PSU.

The tests performed are based around six conceivable setups that are out there and progressively load down the PSU up to the power supply's limits or 1000W, whichever comes first. Since our test equipment's limits are higher than that of the PC Power & Cooling Silencer Mk III 600W, we can test it to the maximum.

DC output quality was fantastic for the Silencer Mk III 600W power supply. It started off with a barely discernible 9mV of ripple on the 12V rail in Test 1. At about 50% load, this had increased to 11mV peak to peak in Test 2. Upping the loads some more, we saw that the ripple increased to 19mV at around 94% load. Upping things to 600W, we saw a final reading of 23mV on the oscilloscope.

The PC Power & Cooling Silencer Mk III 600W carries an 80Plus Bronze certification with it. This means that it must be 82%/85%/82% efficient at 20%/50%/100% loads respectively. Things started off great during the first test and we had hopes of being right on the bubble for Silver efficiency through the rest of the tests. Test 2 shot that out of the water as efficiency didn't increase much, but does show that the unit is right where it should be and still passes. Under full load we see that the unit is well above the 82% minimum required for the rating.

Every now and then a unit comes across our desks that reminds us that it isn't always about the most expensive, highest end hardware that money can buy and that there is a very large group of enthusiasts that have to cut a few corners here and there to afford some higher end parts elsewhere. When you constantly have units in your hands that run upwards of $200 and put out 1000W or more, it is easy to lose touch with reality a little bit as to what the budget enthusiast really needs and can afford. The PC Power & Cooling Silencer Mk III 600W power supply is one of those units and it deserves plenty of praise on many levels.

The unit is very well built inside and out and PC Power & Cooling backs it by a great 5 year warranty which is almost the best in the business. Performance is great all the way around, even before you figure in the price. Voltage regulation is solid from start to finish with nothing being worse than 3%. DC output quality is fantastic and stayed under 25mV even under full load. Even the efficiency is good for an 80Plus Bronze rated power supply.

Once you factor in the price, the PC Power and Cooling Silencer Mk III 600W becomes a clear winner. At an MSRP of $89.99 the unit is already a steal and if you factor in the $20 mail-in rebate it becomes a phenomenal buy. You'd have to be crazy to turn down the Silencer Mk III 600W unless there was something lacking from the cabling arrangement that didn't suit your specific needs. 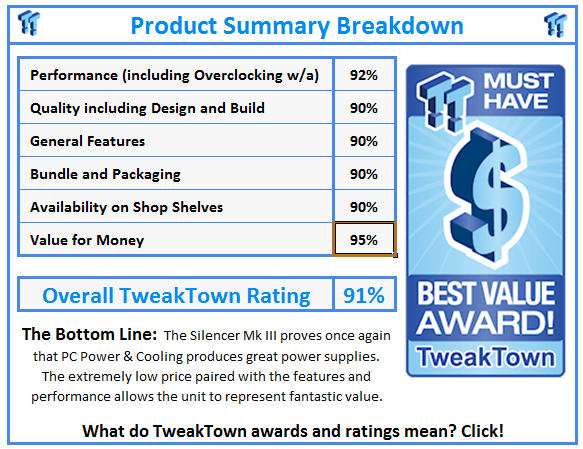