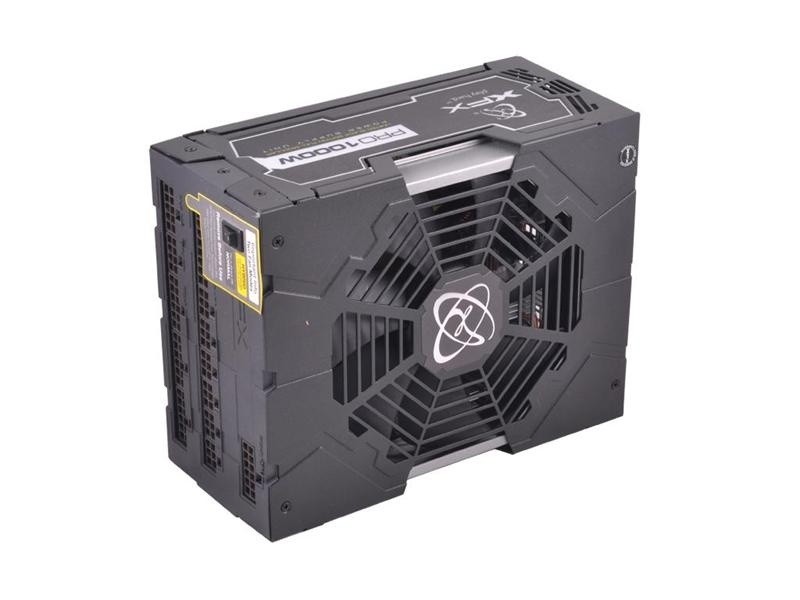 XFX's motto is "Play Hard," and their power supplies allow you to do just that. They offer a wide range of units to fulfill any need, from the low power user to the full enthusiast. XFX recently introduced a few new power supplies to their ProSeries line and we are going to take a look at a few of the new units over the coming weeks. Today we are taking a look at the new ProSeries 1000W Platinum PSU. It should offer enough power for nearly everyone out there and do so at high efficiency.

As you can see, the ProSeries 1000W PSU is a single rail unit that provides 83A of power on the 12V rail. Both of the minor rails are capable of 25A each with a combined total output of 125W. This isn't quite as high as we would like to see, but it will have to do. 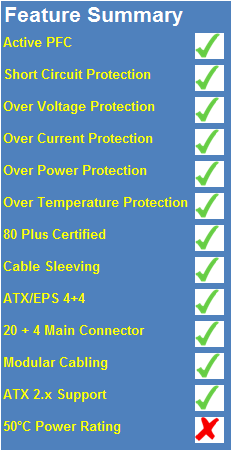 XFX's ProSeries 1000W power supply has nearly a full set of features and almost gets a green check across the board. All of the protections are there, including the Over Temperature Protection. The unit has an 80Plus Platinum certification, but isn't rated for 100% continuous output at 50C. All of the cables are modular and fully sleeved on the unit.

We were able to find the new ProSeries 1000W power supply readily available at a very wide variety of places and the power supply has an MSRP of $249.99. We couldn't find anyone that could beat Newegg's price on the unit, coming in at $249.99 with free shipping. XFX backs the ProSeries 1000W with a five year warranty. 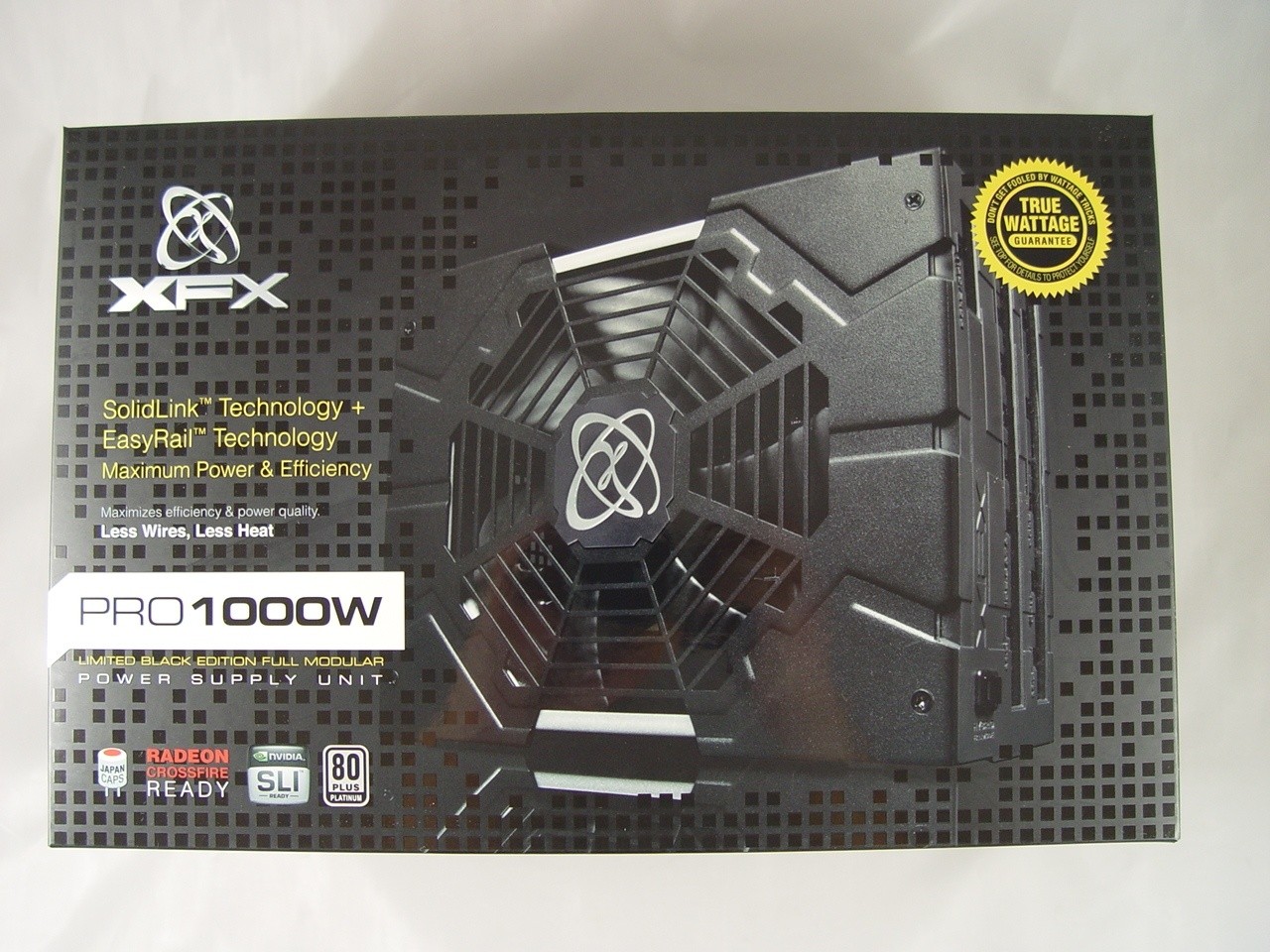 XFX keeps it quite simple on the front with just a little bit of marketing and decent shot of the unit. 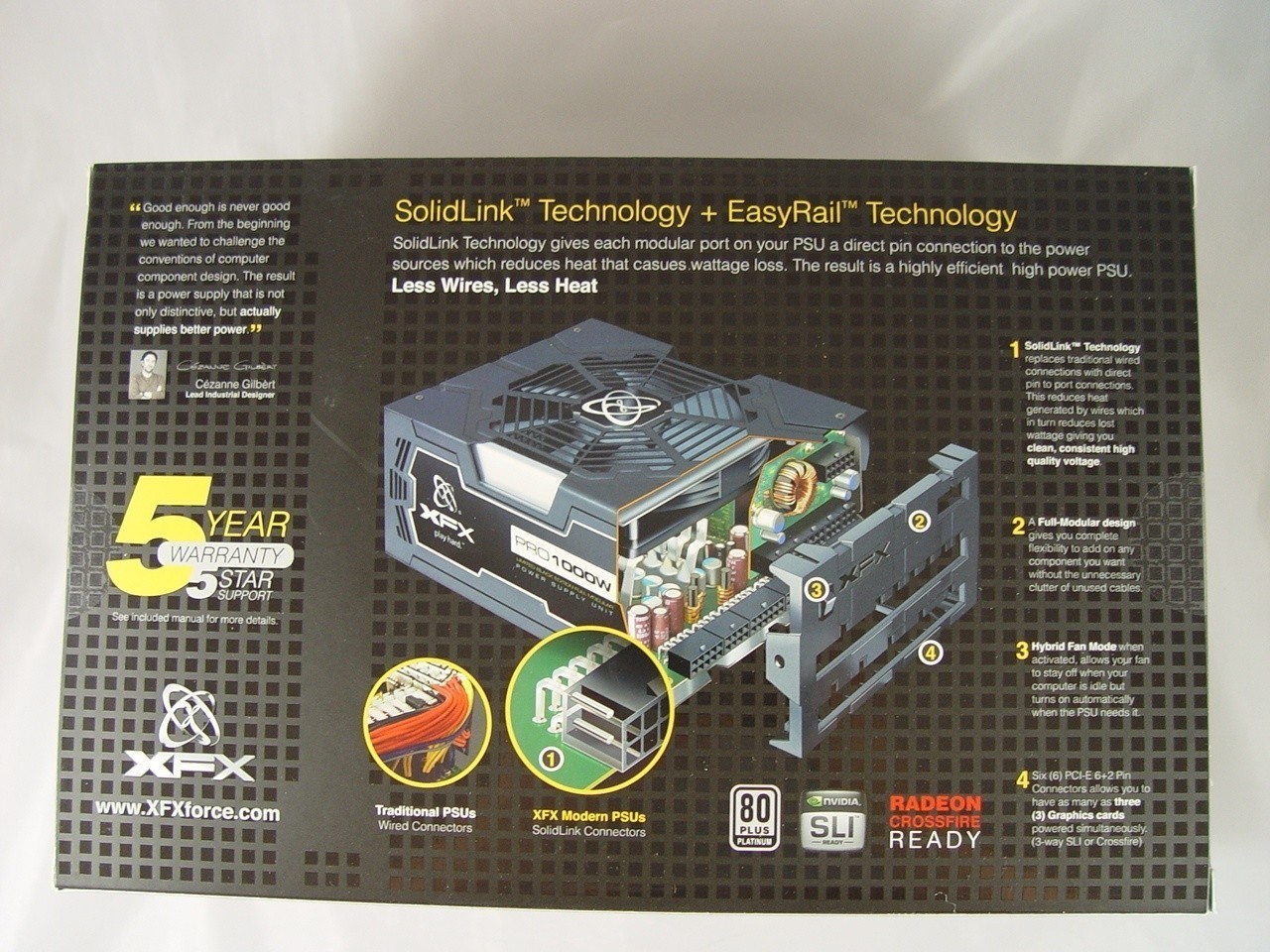 They hit you pretty good when you move over to the back. As you have probably noticed, they are pretty big on the SolidLink and EasyRail points since it is listed on both the front and back. 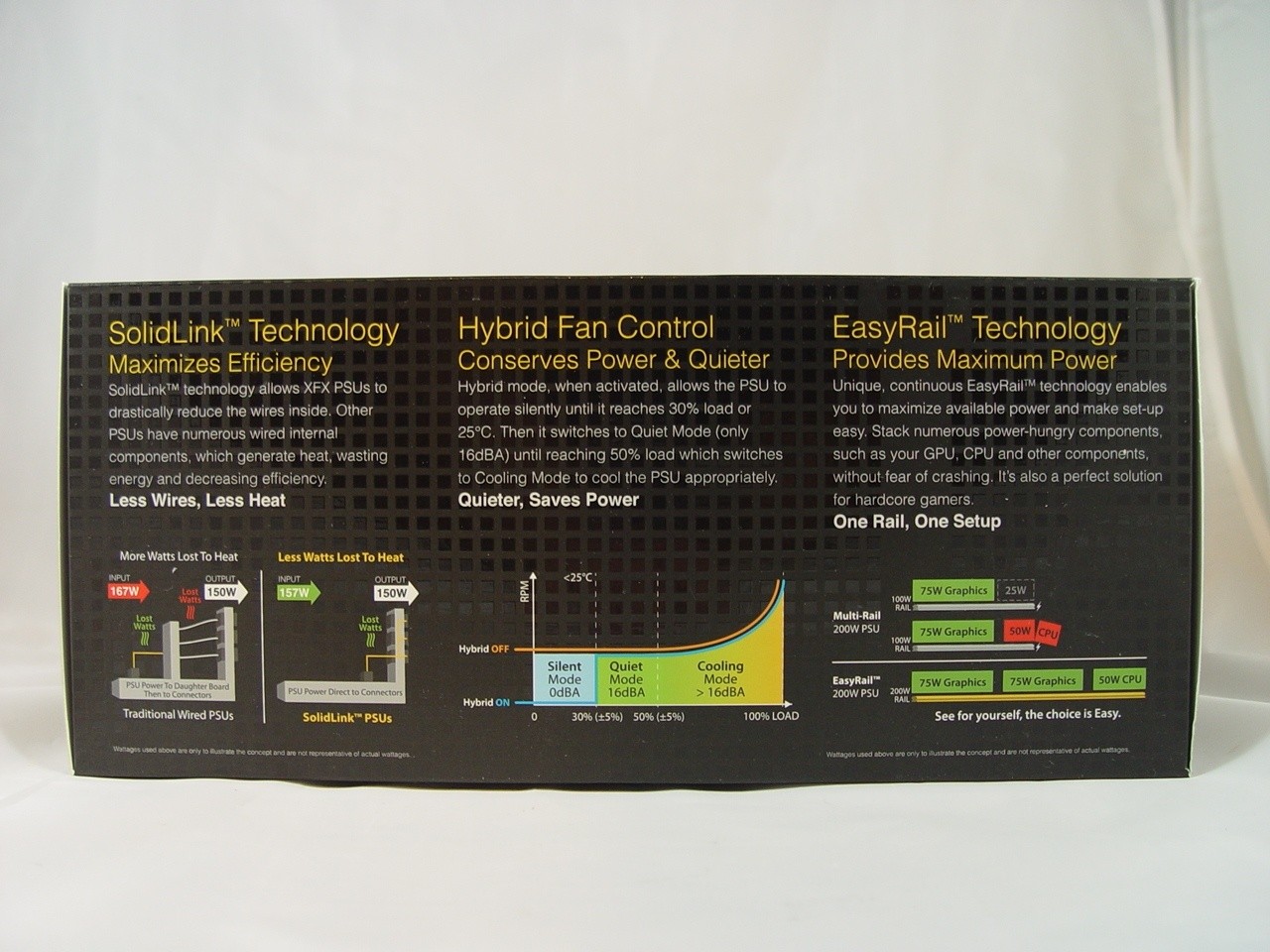 When you look at the top, you start feeling like they are beating a dead horse as you get pounded with more of the same marketing. 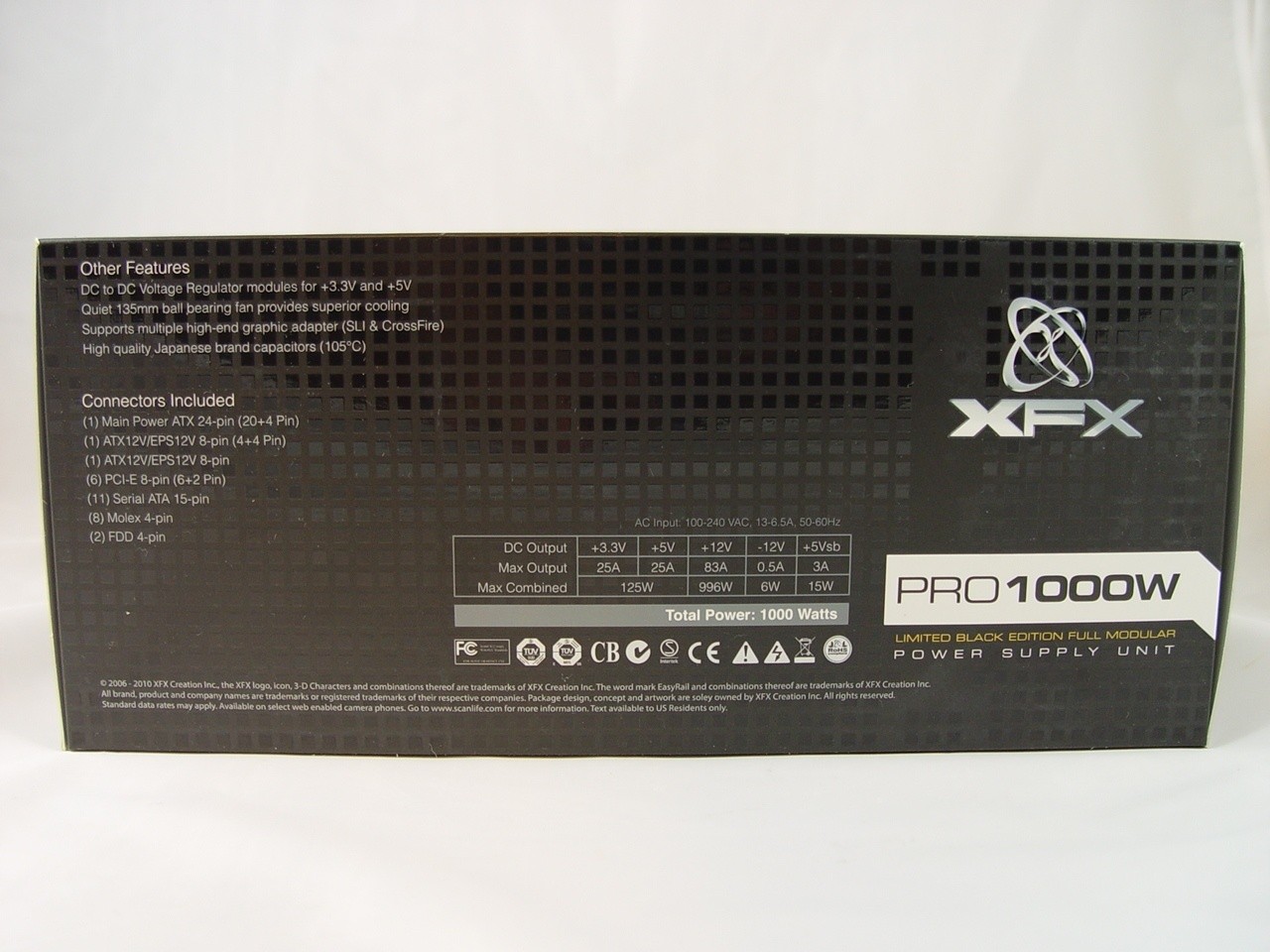 At least we finally get some real information when we look at the bottom. Here we finally see the I/O specifications and the cable list. 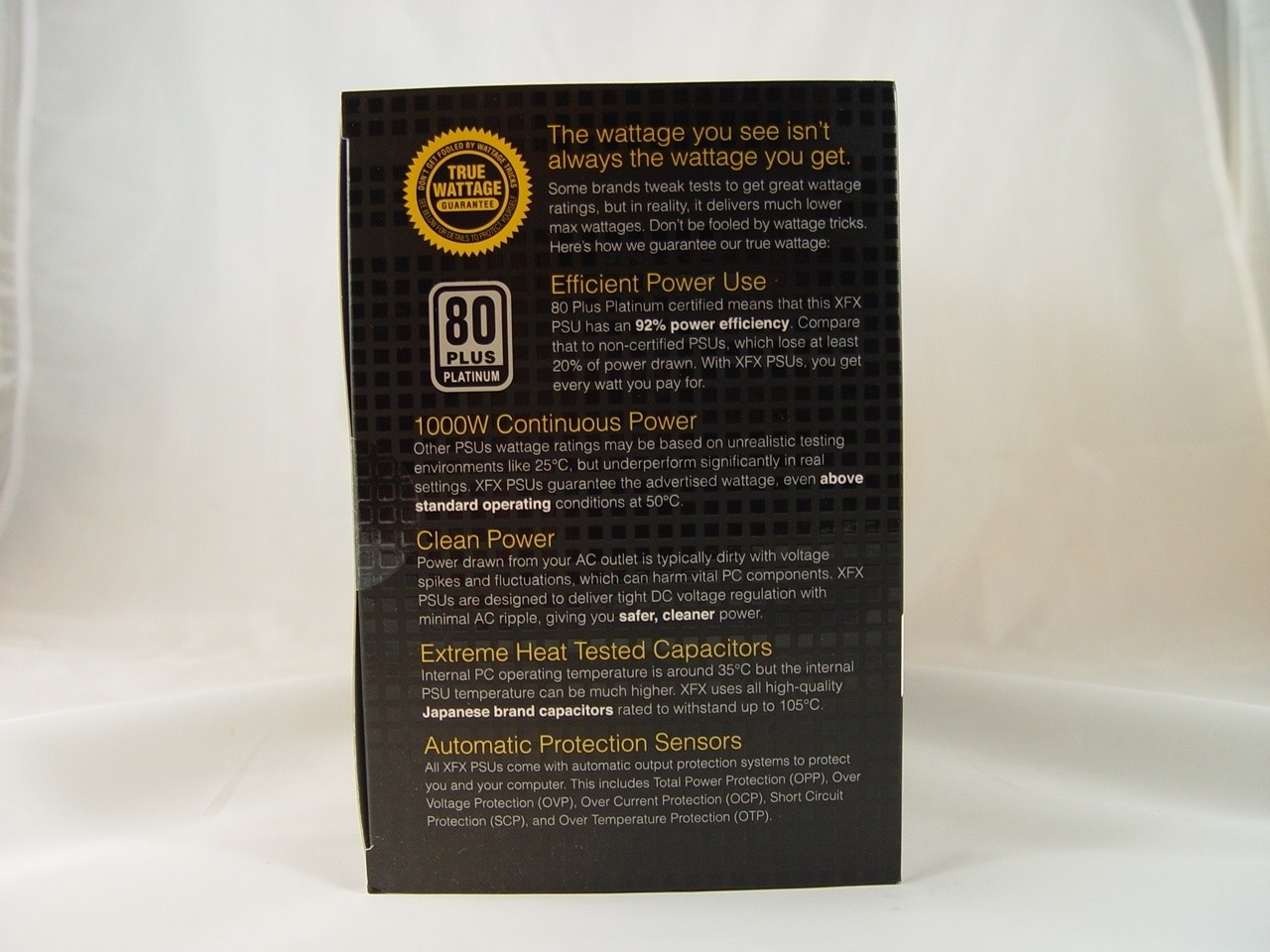 One side has some more information with bold text to highlight the important stuff. 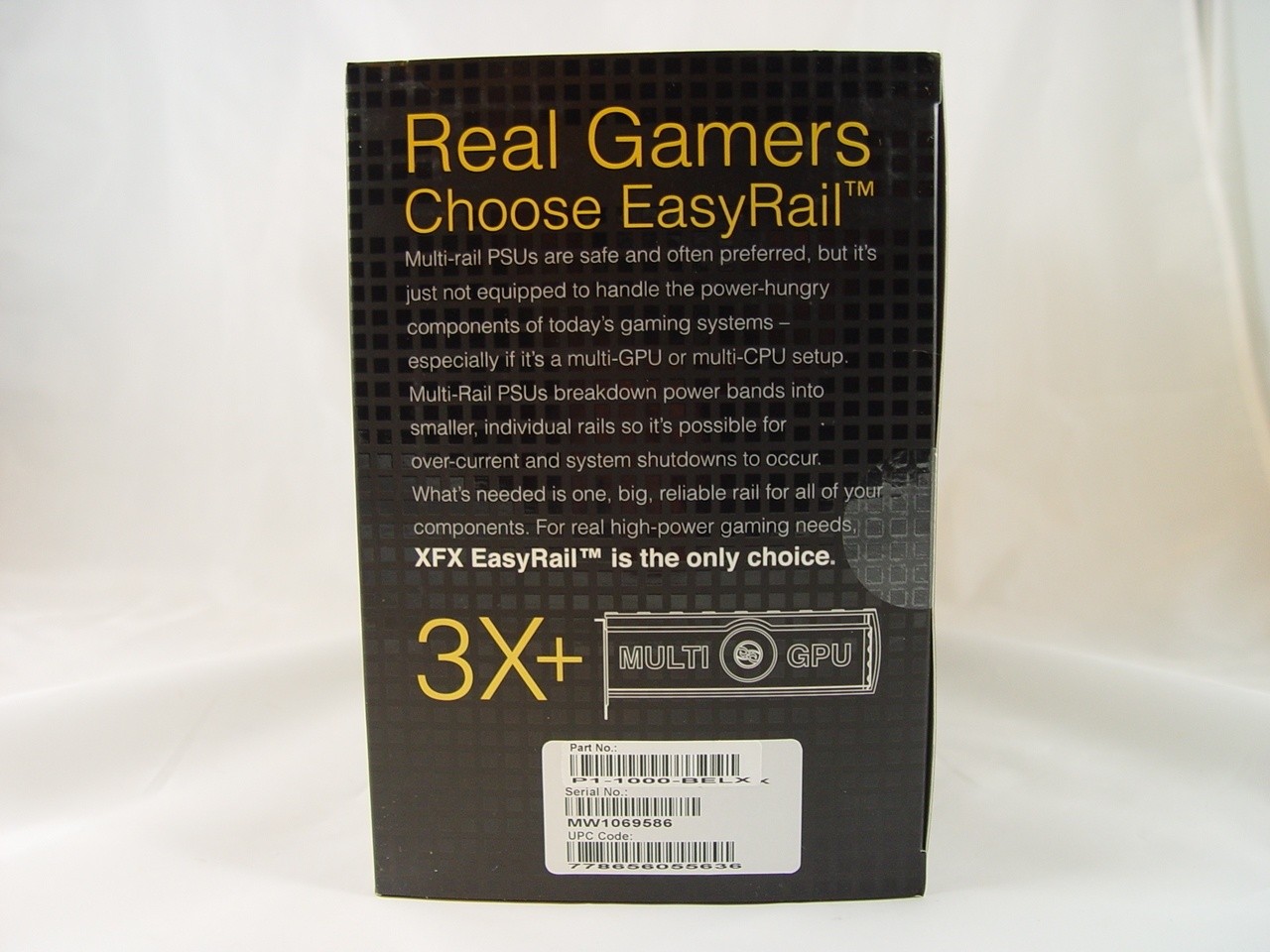 The other side finishes beating the horse on the EasyRail subject and lets you know that it is ready for triple GPU's. 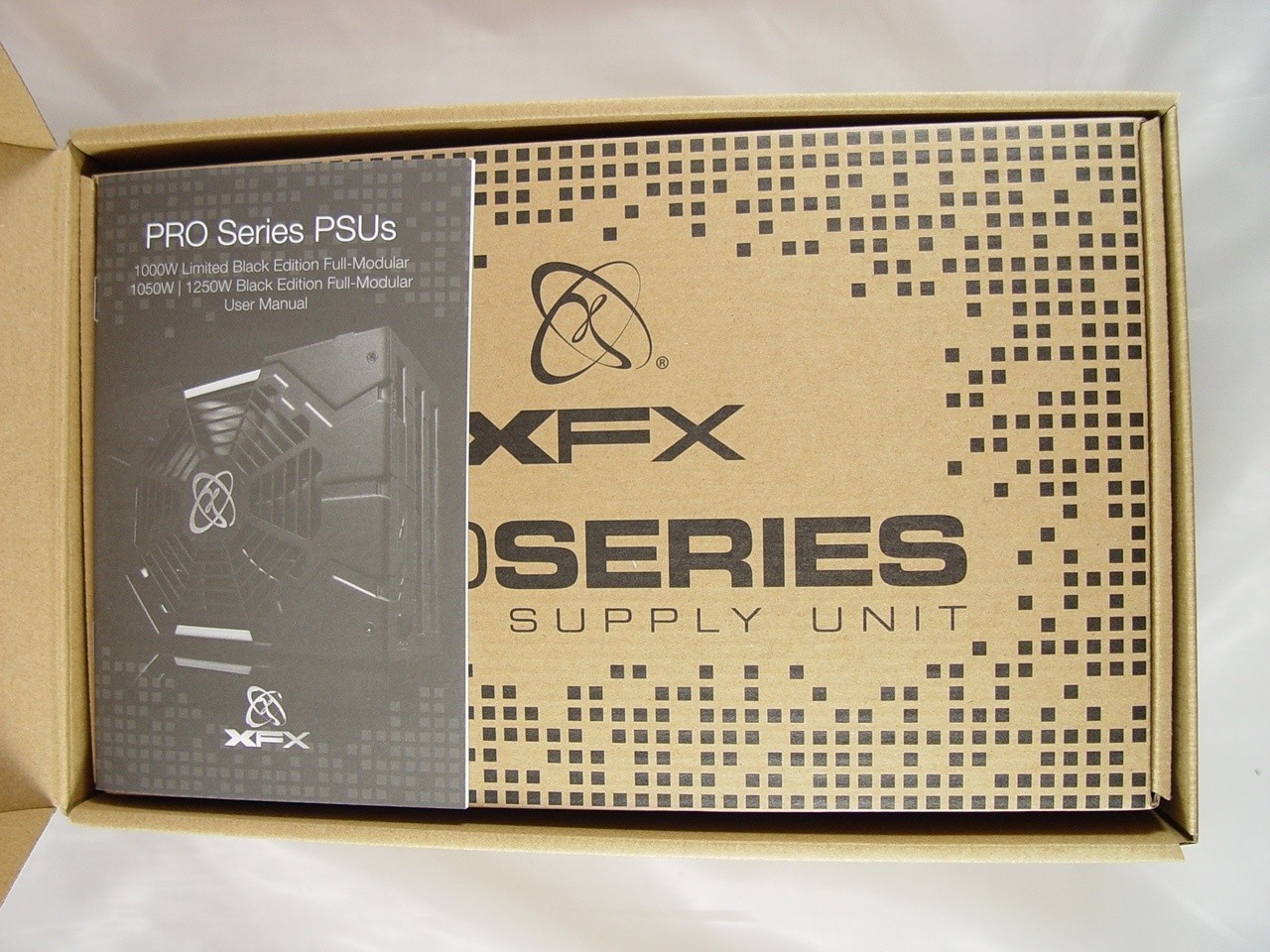 Inside the box we find the user manual and box of modular cables sitting on top of the power supply. 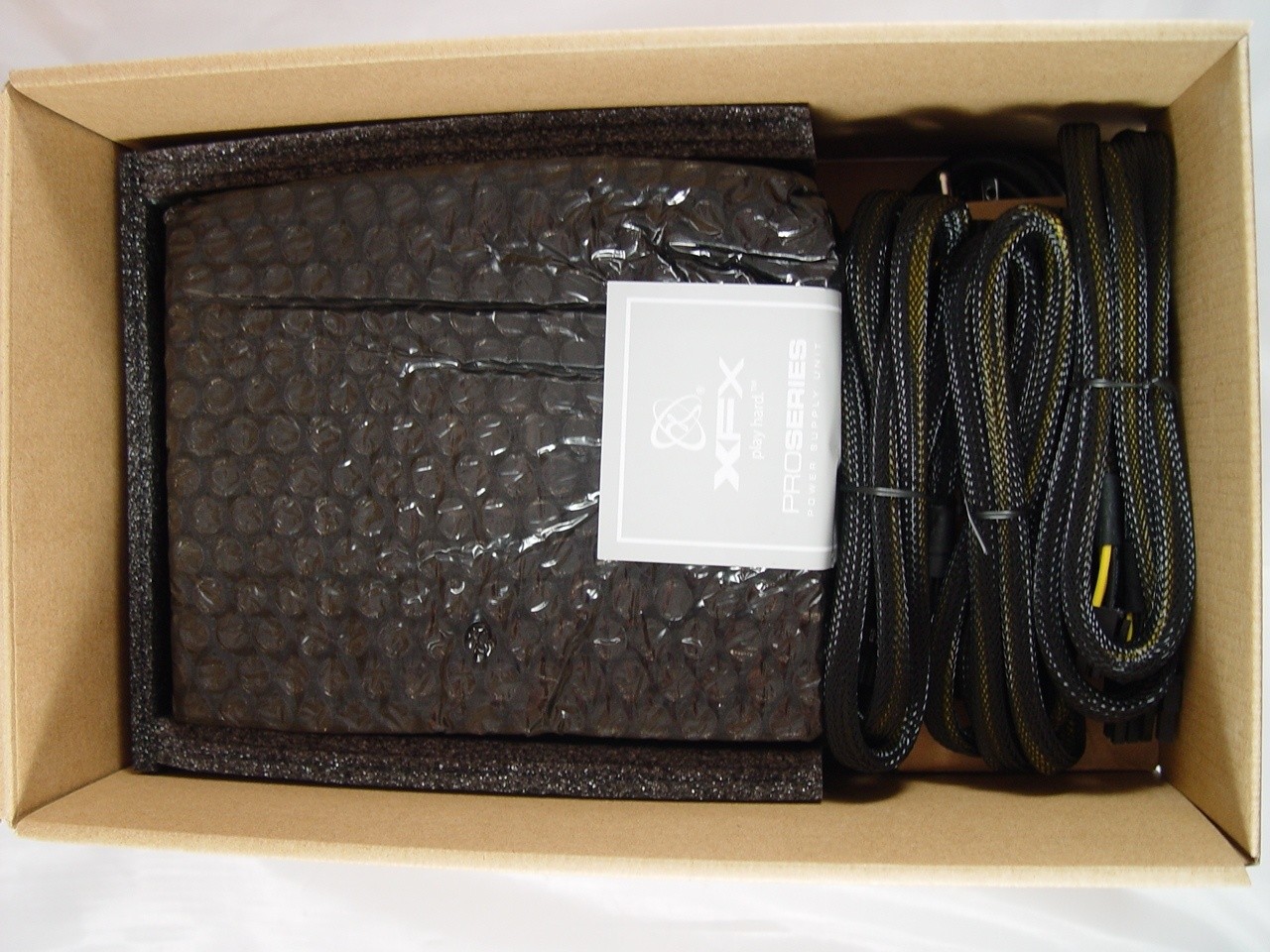 Once we remove that stuff, we find the power supply nestled in some foam and wrapped in bubble wrap. The cables you see there are for the PCI-E connections. 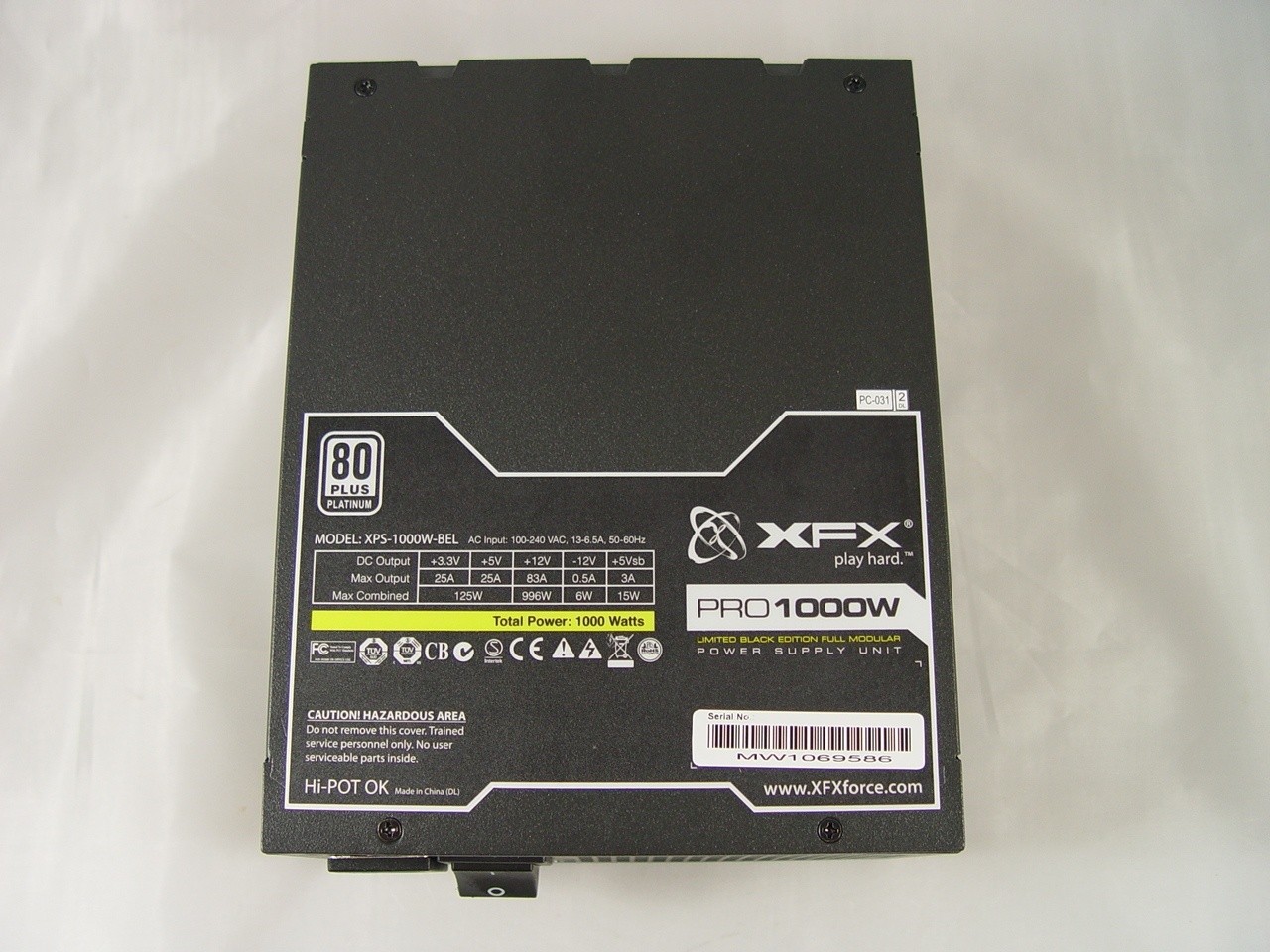 Taking a peek at the top, we see that XFX has placed the I/O Specification label here out of sight. 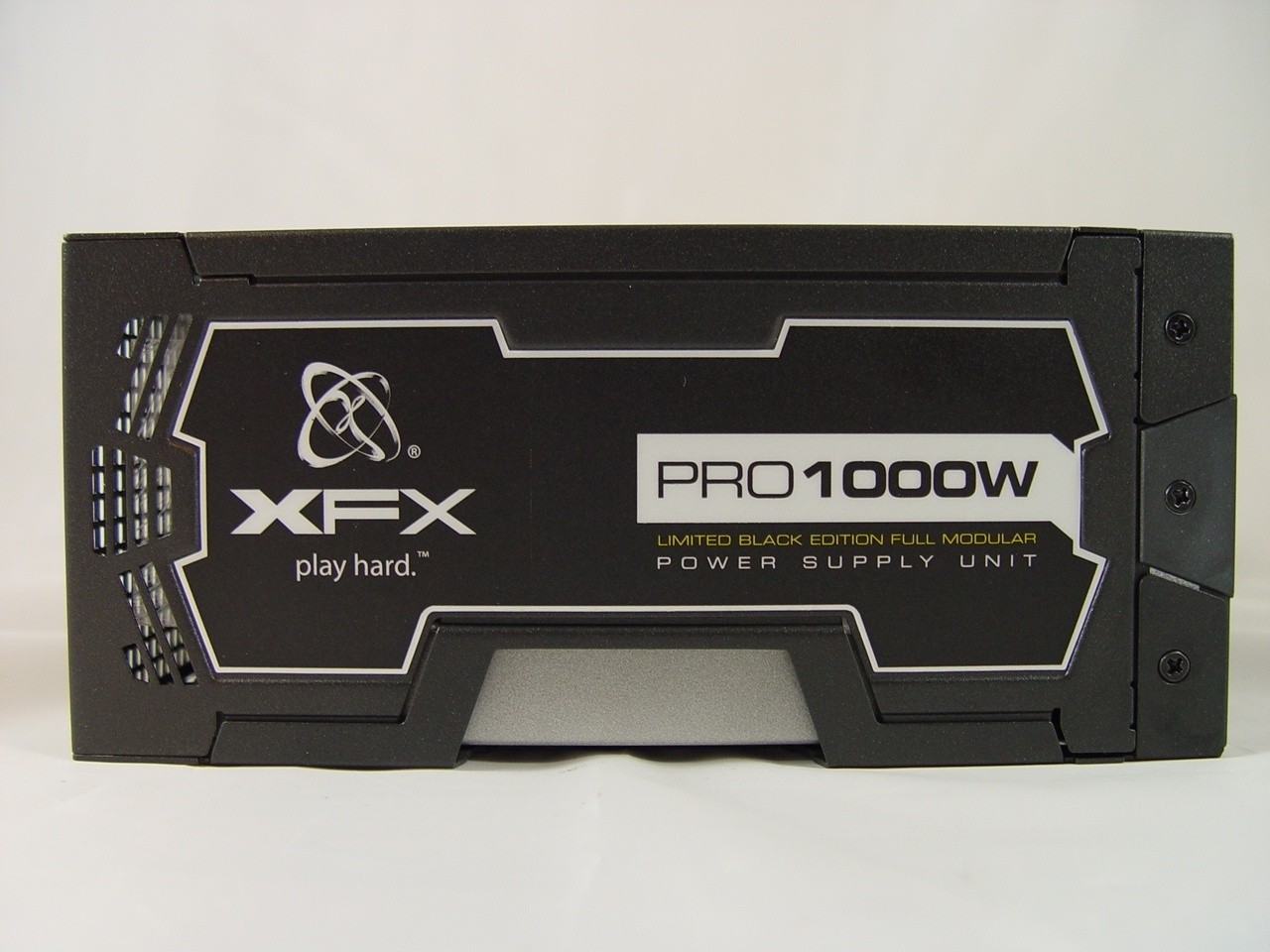 On the side we can see that there is some extra venting and that the standard style case isn't used. It will be interesting to see what we can find once we open this thing up. 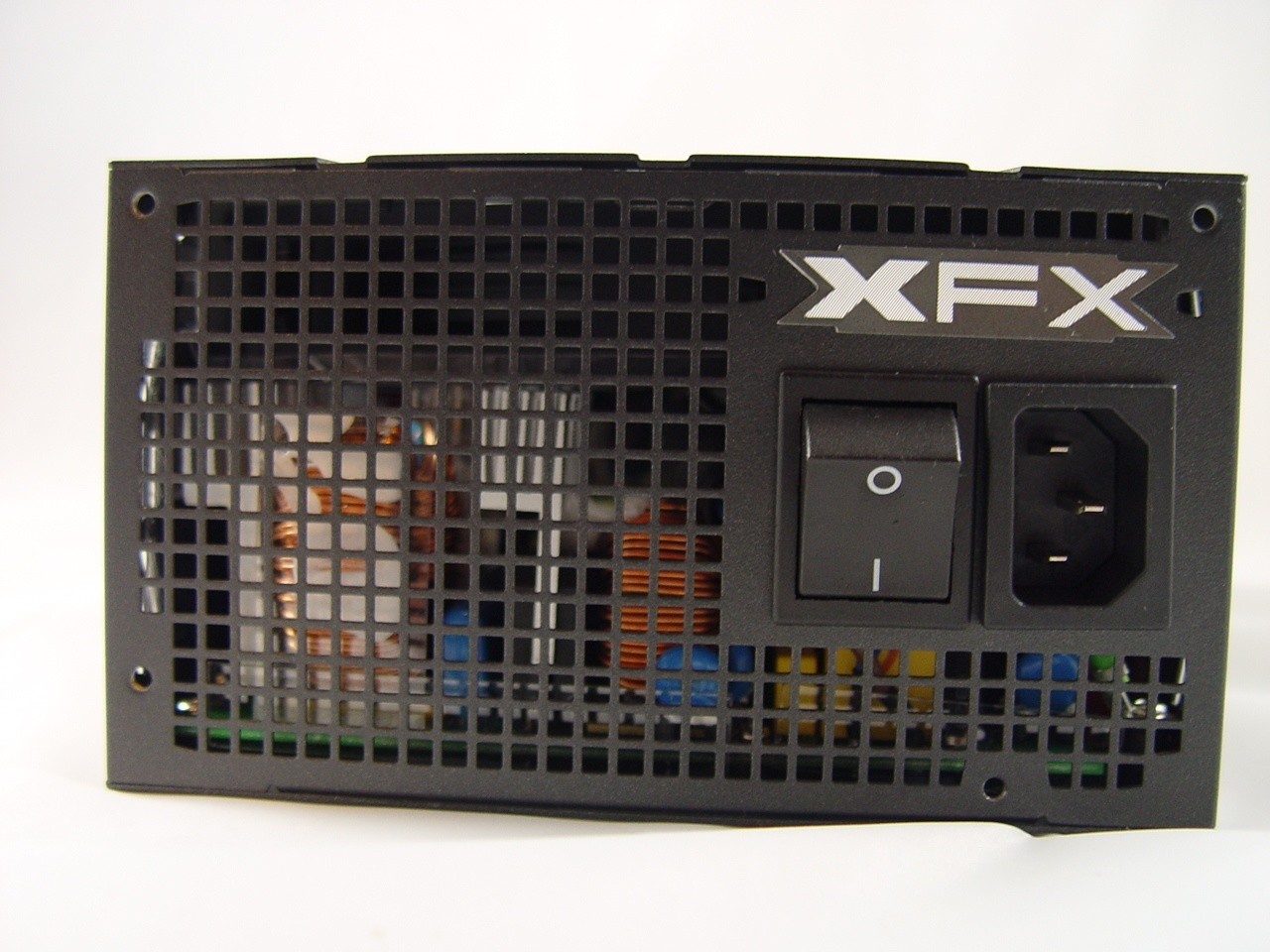 The back of the unit uses square vent holes similar to that of what Antec uses. It also has a large on/off rocker switch and the AC input. 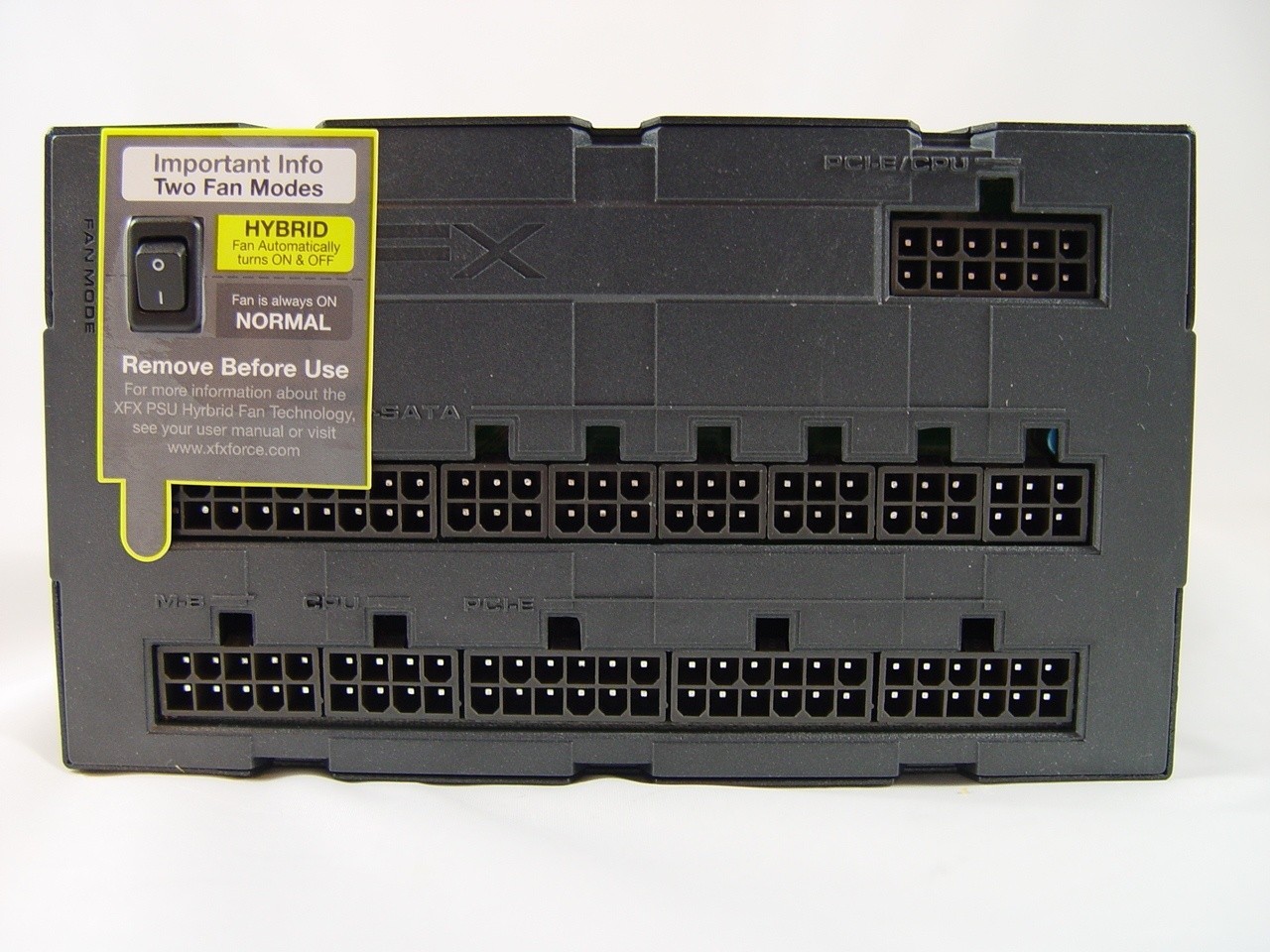 Checking the front, we can see all of the modular connections for the power supply. Also note that there is a switch to control the fan. This allows you to decide if you want to have the fan run all of the time or just let it be temperature controlled. 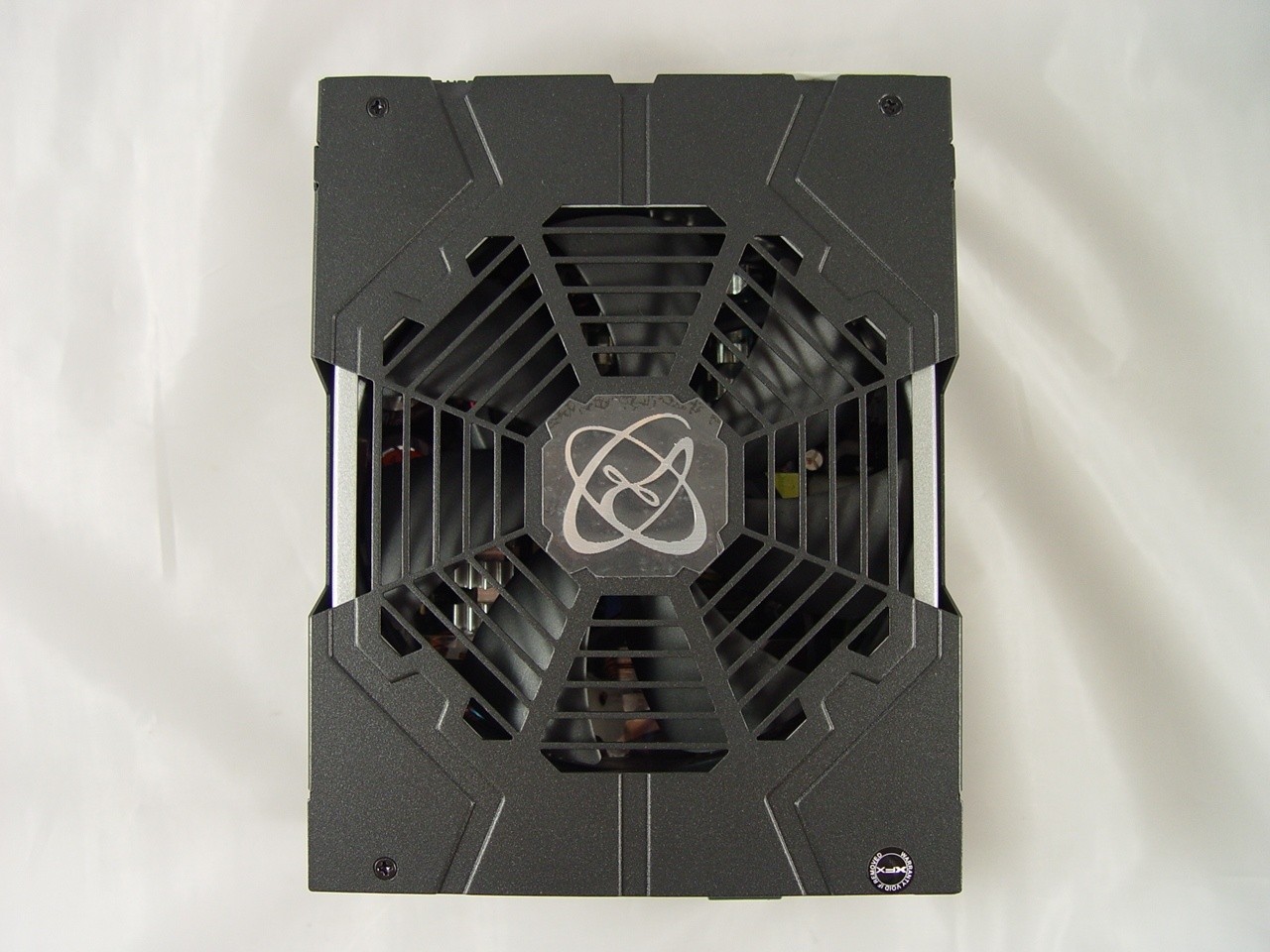 XFX uses quite a different design for the fan grill. While this may not be optimum for airflow, it does add some flair that we don't normally see in a power supply. 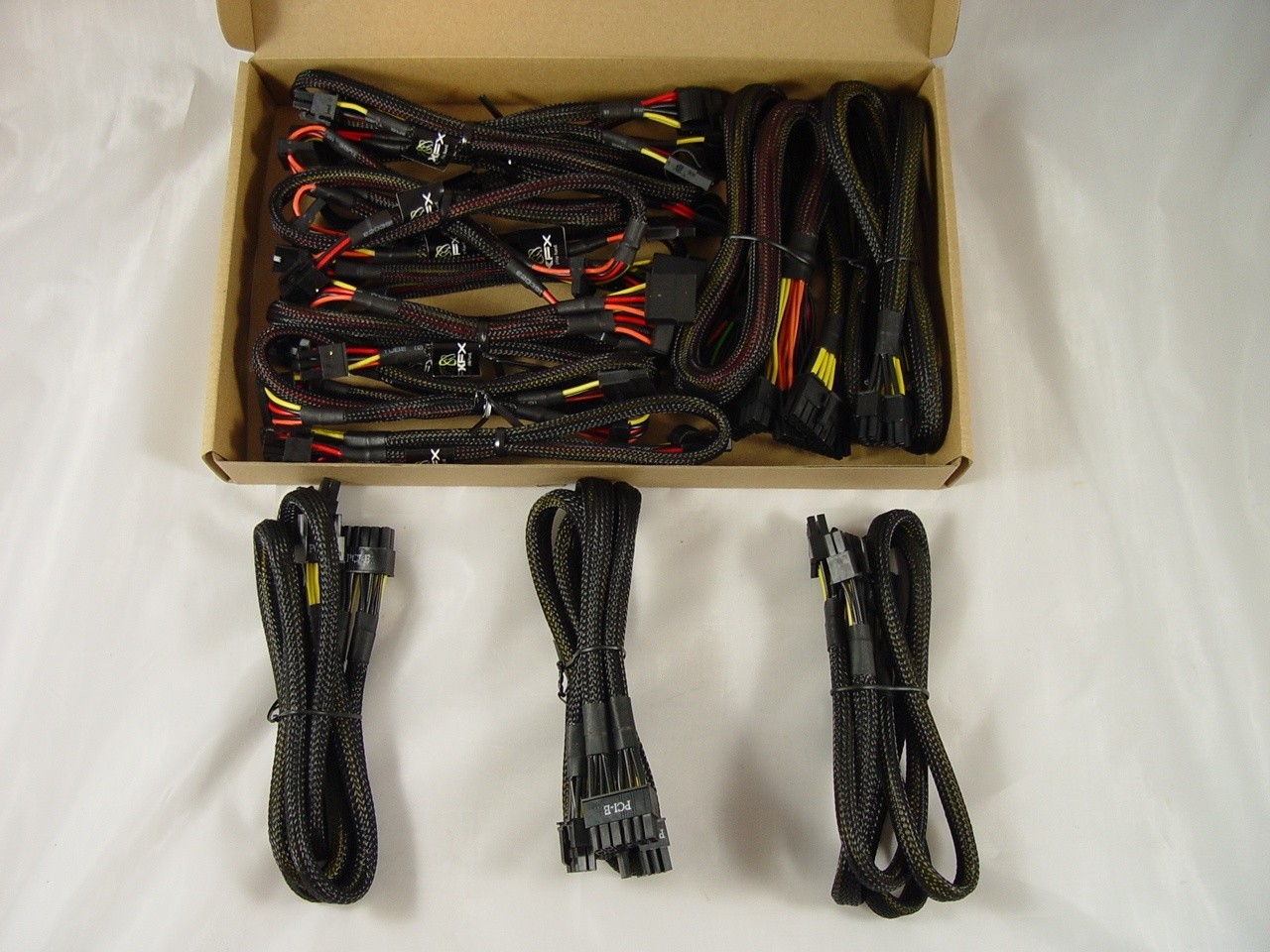 Also included are the AC input cable, black thumb screws to mount the unit and the user manual. 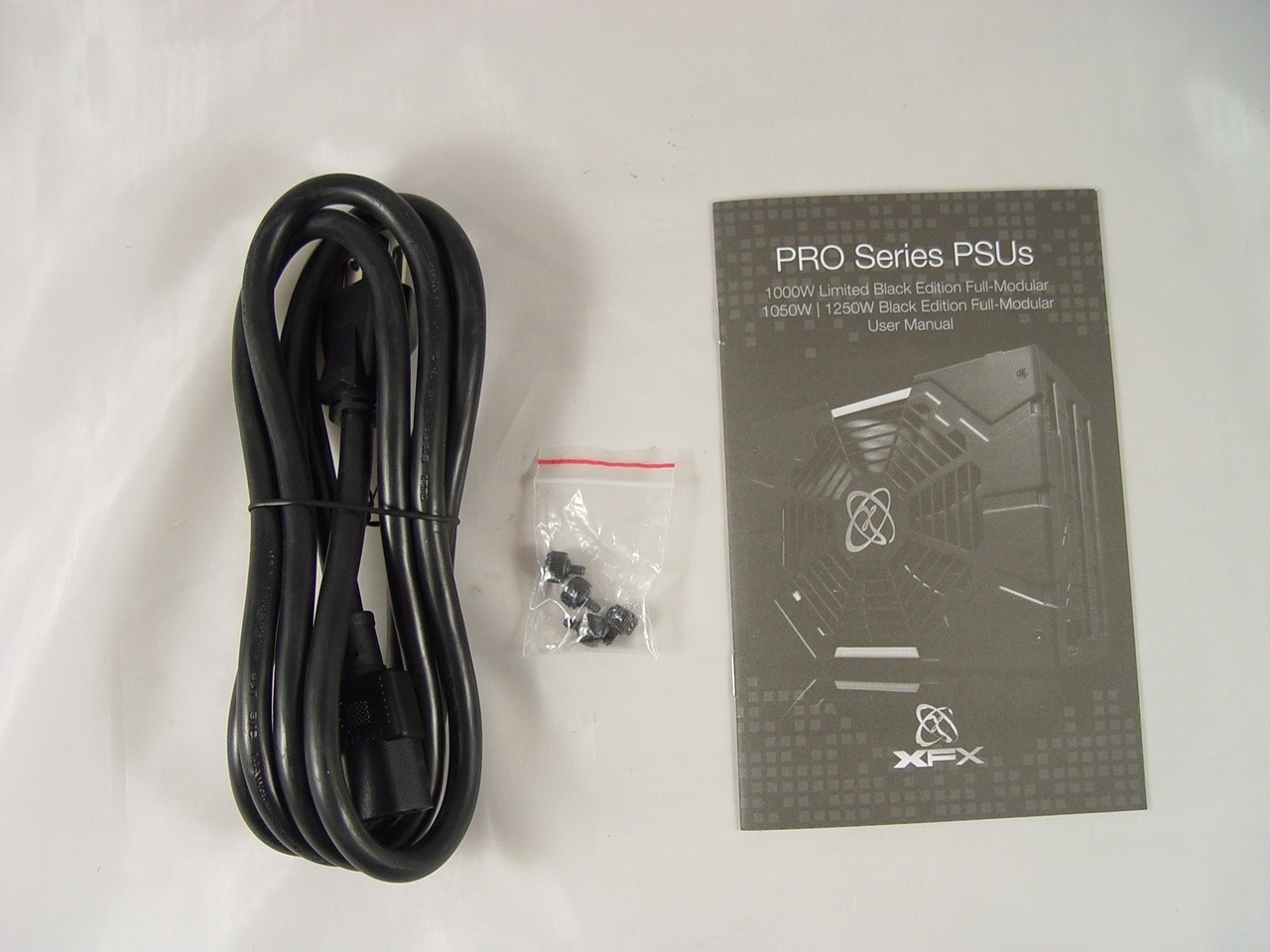 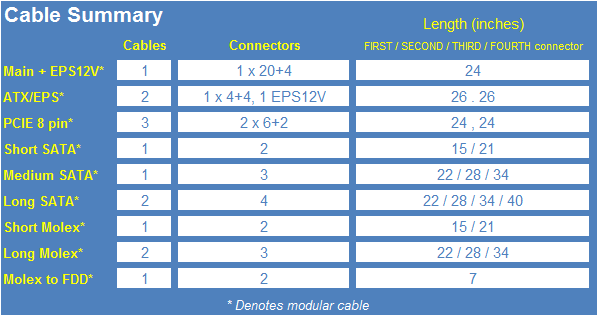 As you can tell from the cable summary, the ProSeries 1000W unit is fully modular. XFX includes a very comprehensive list of cables and connectors to cover you in just about any situation that you could come across. The only real complaint is that all three of the PCI-E cables are of the same length. XFX was smart enough to take care of this with the SATA and Molex cables as they have several different lengths, but not with the PCI-E cables. A few inches of variance in them would have been nice.

XFX keeps the rail distribution sweet and simple with a single 12V rail. This is the "EasyRail Technology" that they bombard you with on the front. It is just a marketing ploy to make you think it is something new when in reality it is something that we have been enjoying in high end power supplies for quite some time. 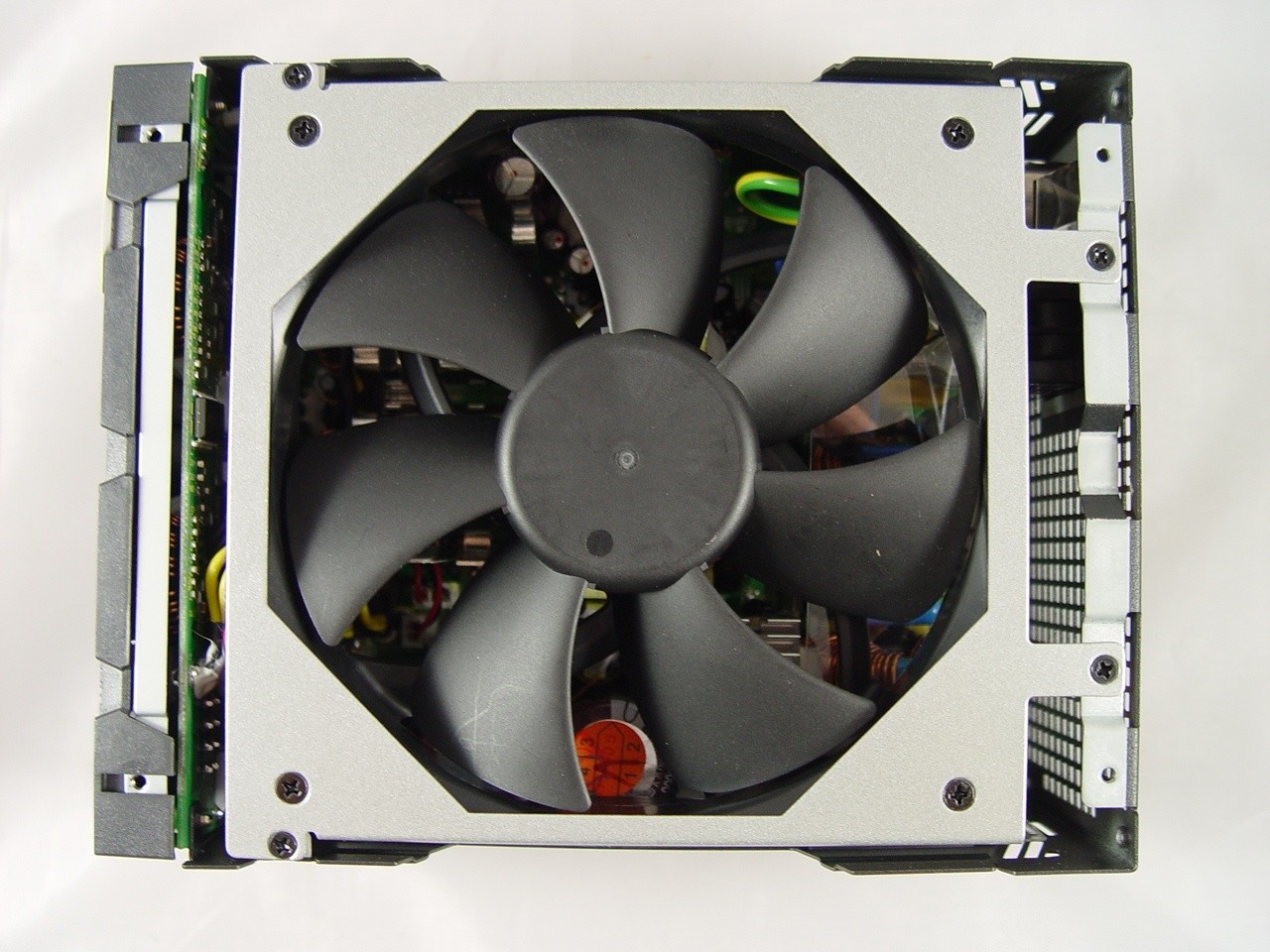 Popping the top off the unit, we find that the fan is mounted a bit differently as it isn't attached to the top of the case. 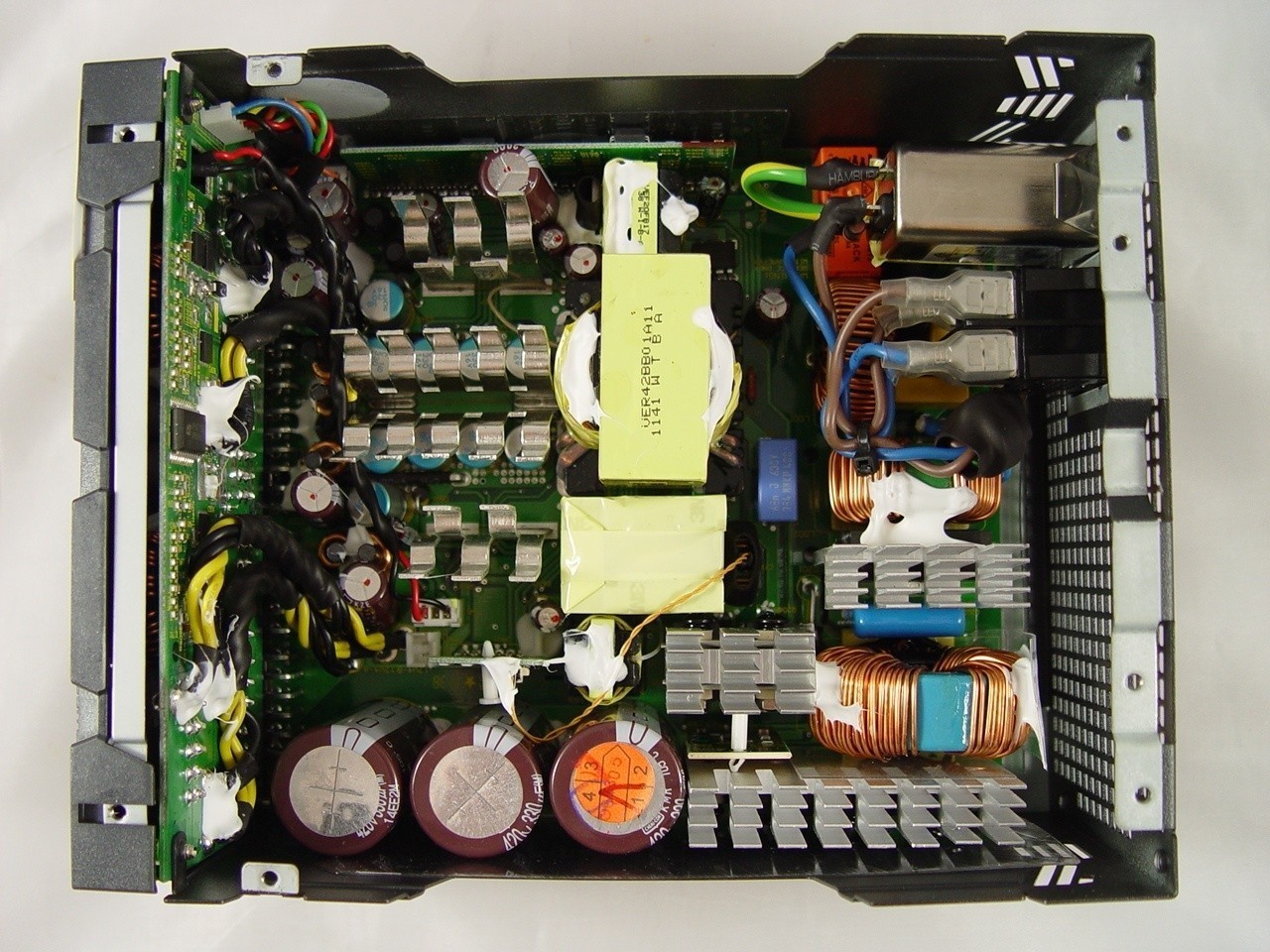 Once we pull the fan from the unit, we find that XFX has crammed quite a bit into the ProSeries 1000W unit. At least they have taken care to add heatsinks in numerous places to help cool the unit. 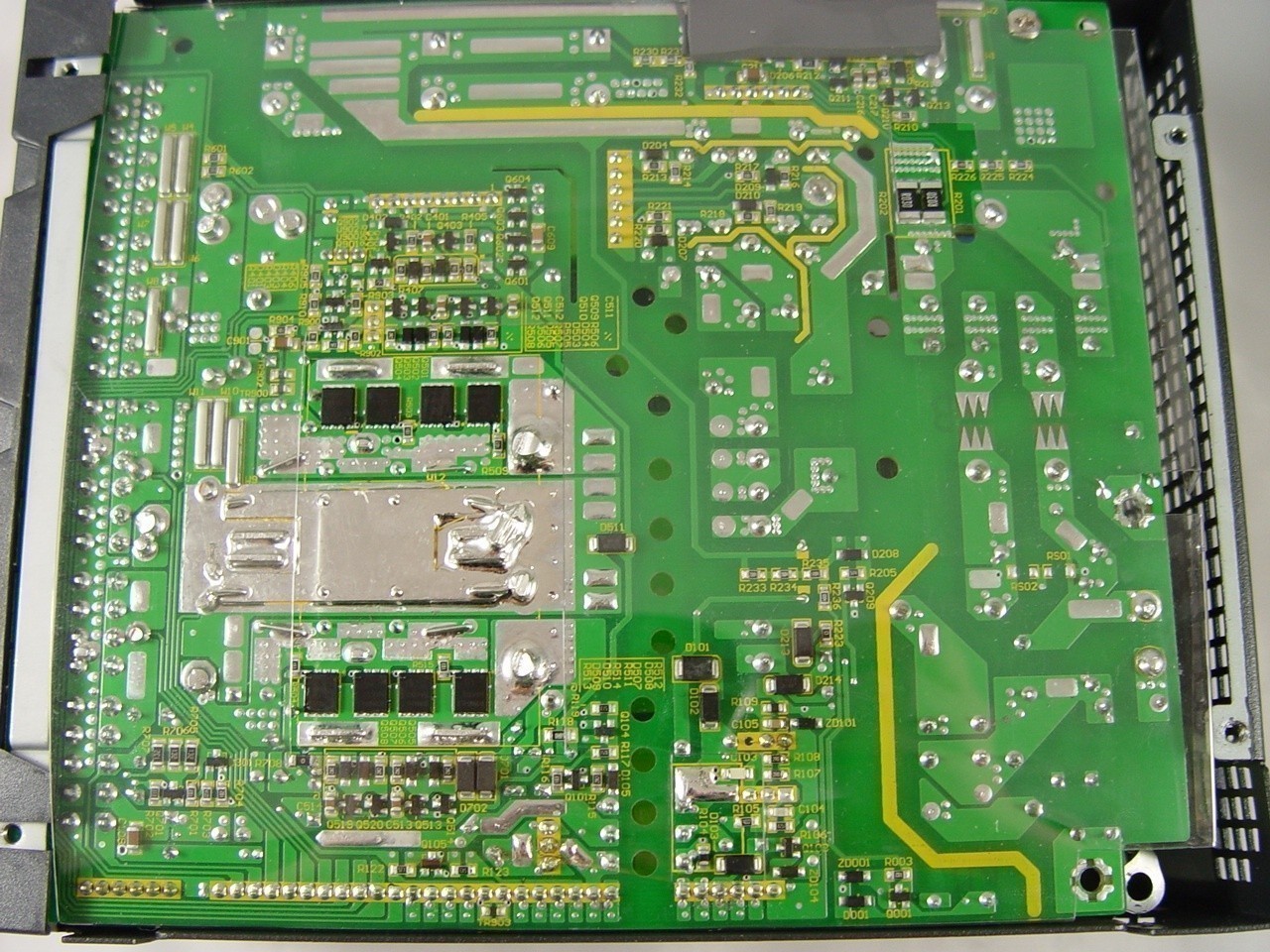 As part of taking this unit apart, we are actually able to see the bottom of the PCB. XFX has done a very good job of soldering here. 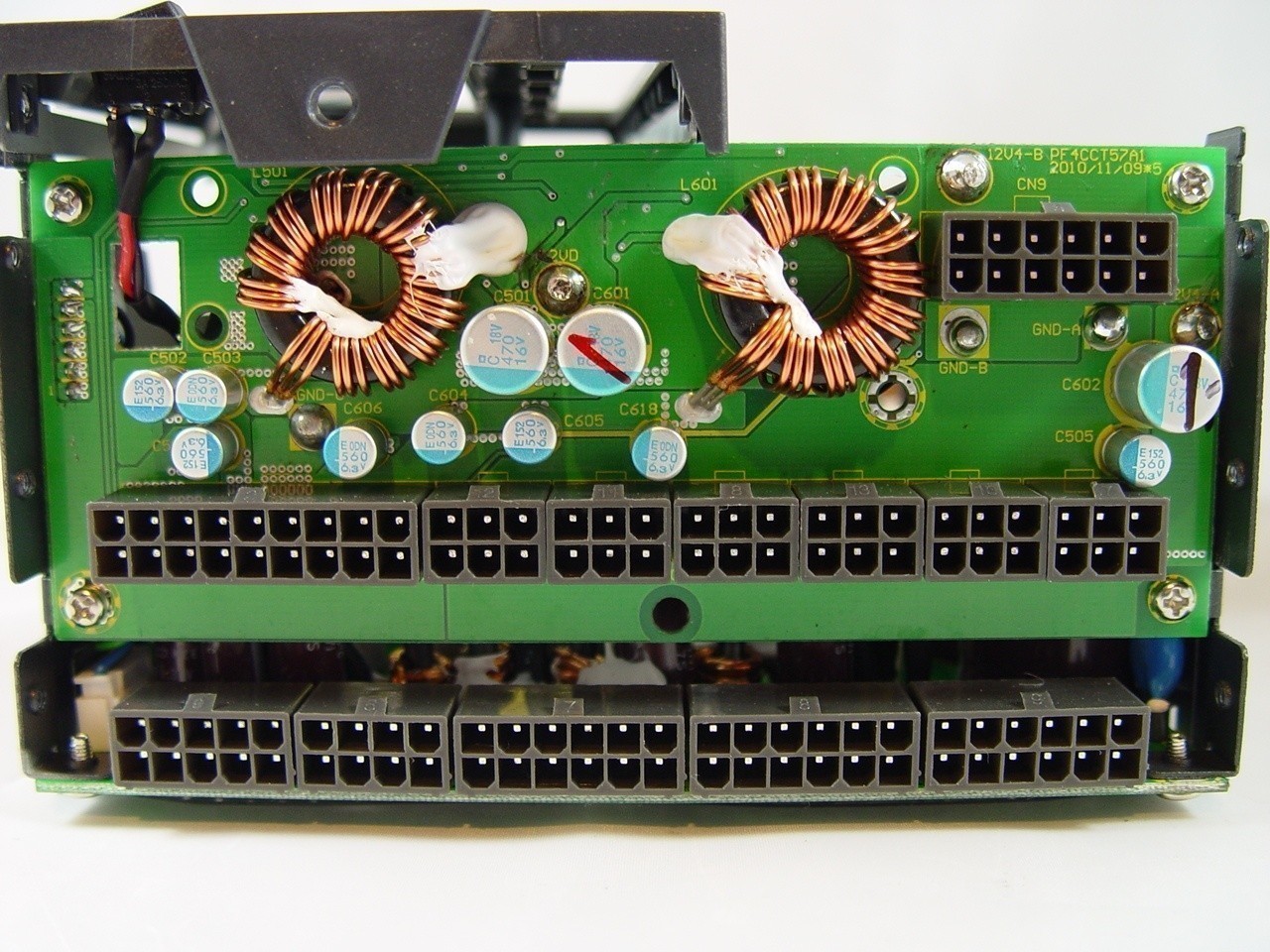 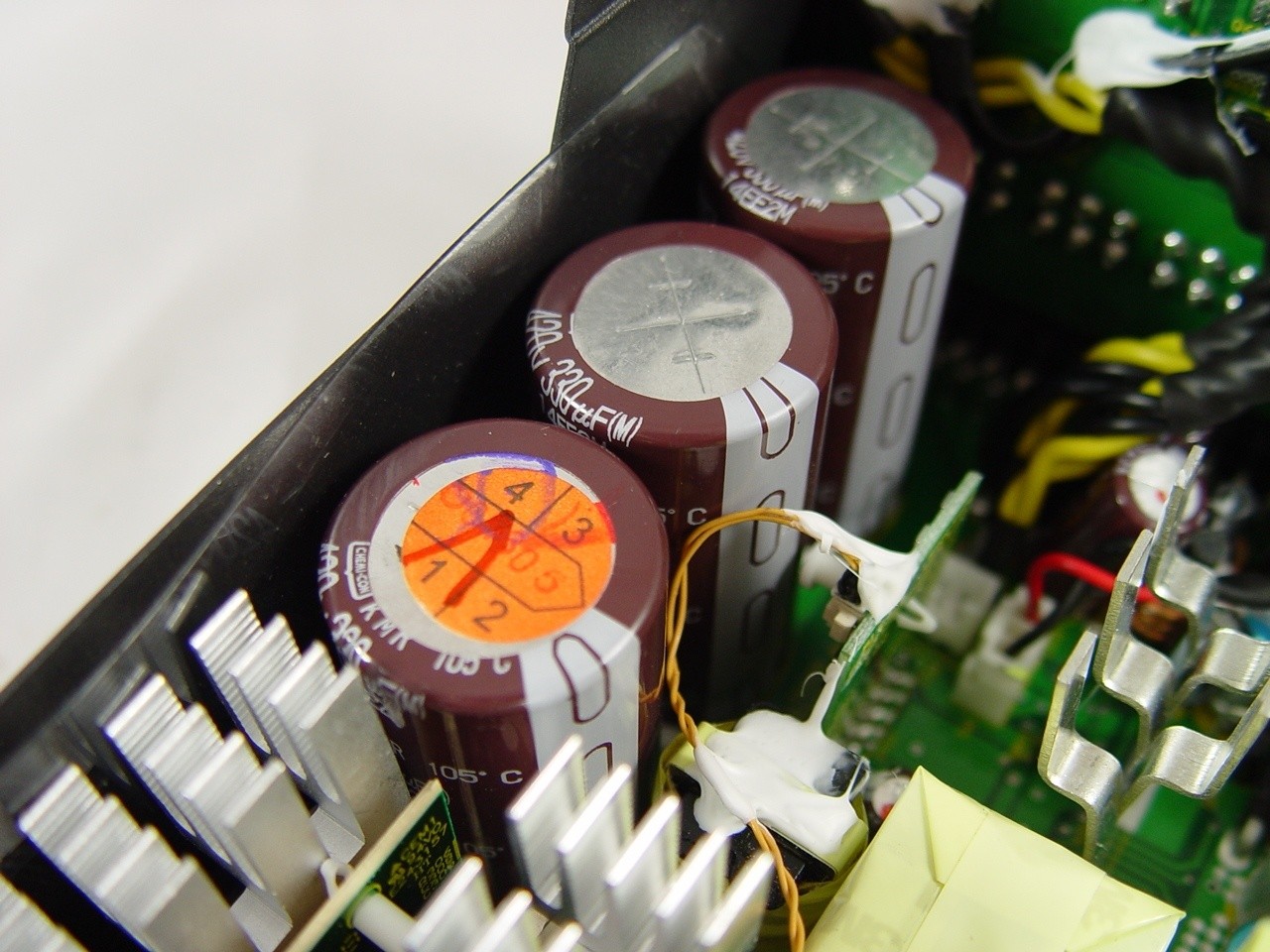 Taking a close look at the capacitors, we find a trio of Nippon Chemi-con caps on the primary side. This is something that we usually only see in power supplies greater than 1000W and that isn't necessarily guaranteed. Our best guess is that they used three slightly smaller caps instead of two because of space constraints between other components and the enclosure. 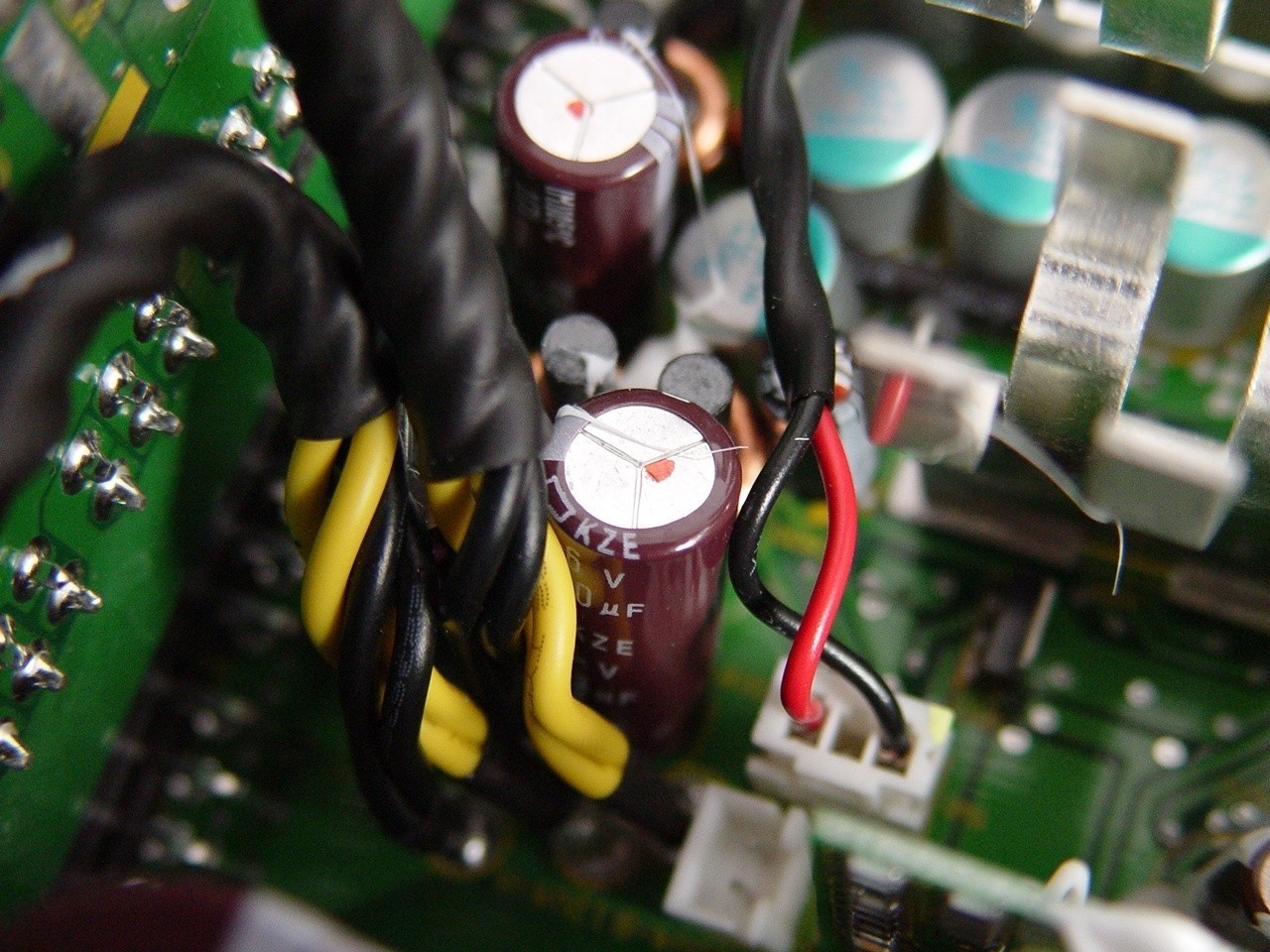 Nippon Chemi-Con capacitors were present on the secondary side as well. 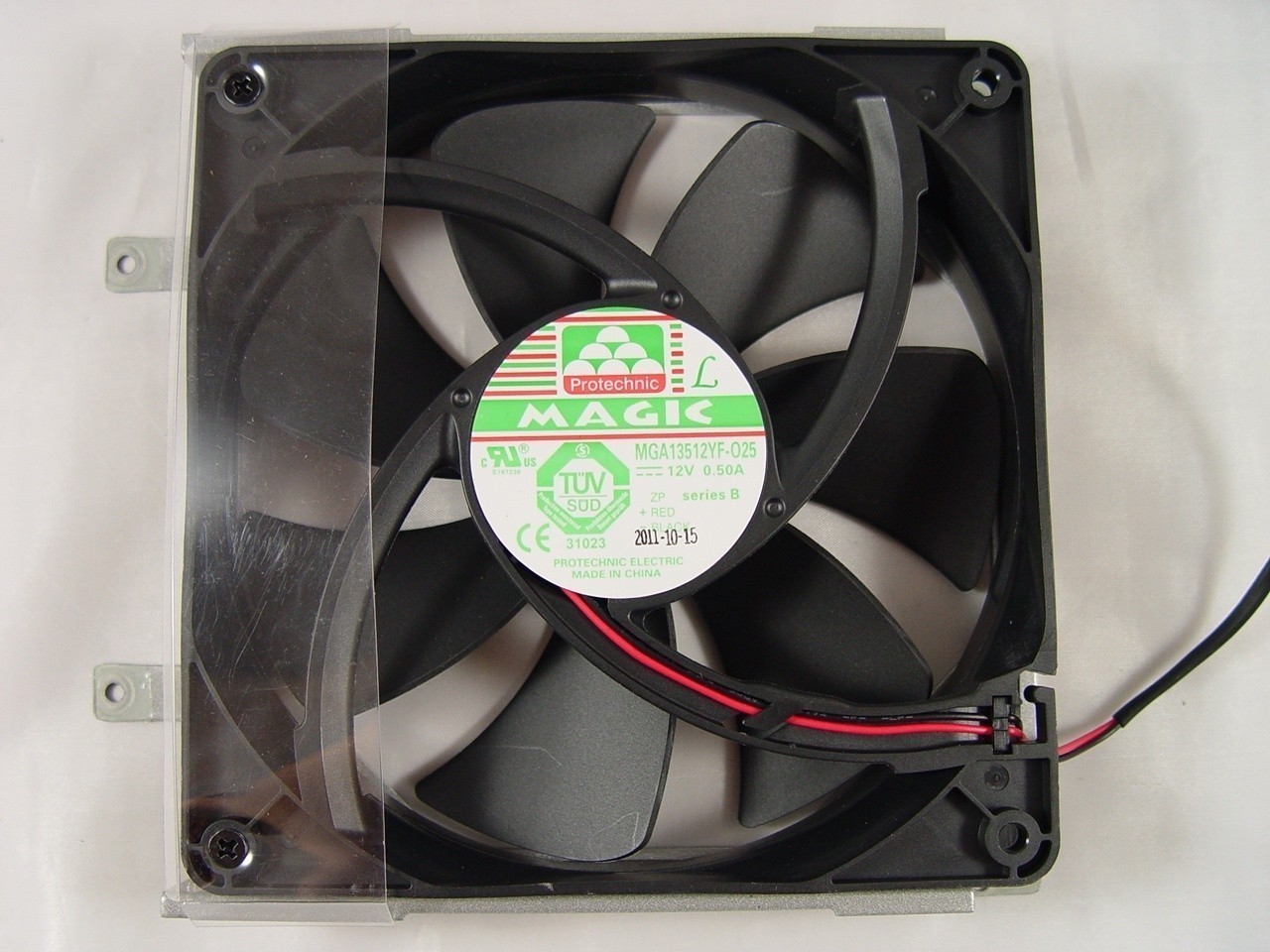 The tests performed are based around six conceivable setups that are out there and progressively load down the PSU up to the power supply's limits or 1000W, whichever comes first. Since our test equipment's limits are equal to that of the XFX ProSeries 1000W, we can test it to the maximum. 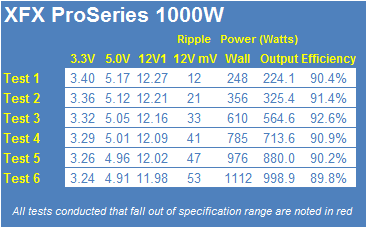 DC output quality was OK from start to finish. Starting out, we were clearly able to see a ripple on the scope during Test 1 where we measured noise at a low 12mV peak to peak. This steadily increased as the loads also increased. By the time we had reached around 50% load, the unit ripple had crept up to 33mV. Under full load, we saw that the noise on the 12V rail had crept up to 53mV.

XFX has a great power supply with the ProSeries 1000W. It is loaded with features, has great cable selection and a ton of power to handle just about whatever you can throw at it. Voltage regulation was good, with 4% regulation on the minor rails and 3% on the single 12V rail. The unit also had good DC output quality with a maximum of 53mV of ripple under full load and is backed by a five year warranty. On top of that, that unit has great efficiency, proving that it is worthy of the 80 Plus Platinum certification that it bears.

Unfortunately the unit comes at the very steep price of $250. Enthusiasts are used to paying a premium for additional features and better performance, but at that price, it is expected that more is included. On top of that, enthusiast level performance is expected and 4% voltage regulation with greater than 50mV ripple on the 12V rail is not acceptable. Those that are doing their shopping will find that they can get their hands on the Enermax MaxRevo 1350W for just a little bit more coin and get better performance all the way around. Hopefully XFX drops the price of the unit soon and makes it a bit more attractive. 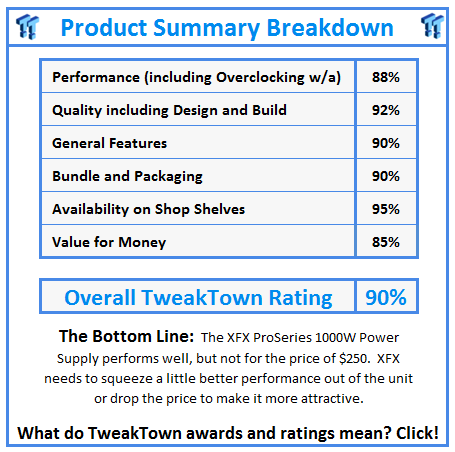