I find myself excited about Fusion. Prior to the launch of Llano; Brazos gave us a really good idea on what exactly AMD wanted to do with the new platform. Brazos is great and it clearly has its place in the market. Like I've said so many times, though, the power for everyday computing probably isn't quite there.

That's where the Llano platform comes in. We've already looked at it in great detail; you can see our original launch coverage AMD A8-3850 (Llano) APU and A55/A75 Chipset Review which concentrated more on the CPU side of the platform when it came to testing. So much of Llano, though, is the graphics capabilities of it and if you haven't already looked, I highly recommend you take the time to look at our other article here. That piece really covers the GPU side of Llano while also wrapping our final thoughts up on the platform.

Today, though, we're going to be looking at our first motherboard in the form of the ASUS F1A75-V Pro. Of course, we've already done a big preview on this board that covered everything on the board and the BIOS; because of that we'll be getting straight into the test system, talk about overclocking and get into the performance side of things. If you want to see more of the board, though, I'd recommend you check out our original preview piece, ASUS F1A75-V Pro (AMD A75) Llano Motherboard Preview.

If you've already checked out our original preview, then you will no doubt want to just get stuck into the performance of the board. On the next page you'll find the test bed we're working with today and you'll also see the overclock we managed to achieve with the board. With that done we'll get stuck straight into the performance of the board before wrapping everything up. So with haste, let's move on! 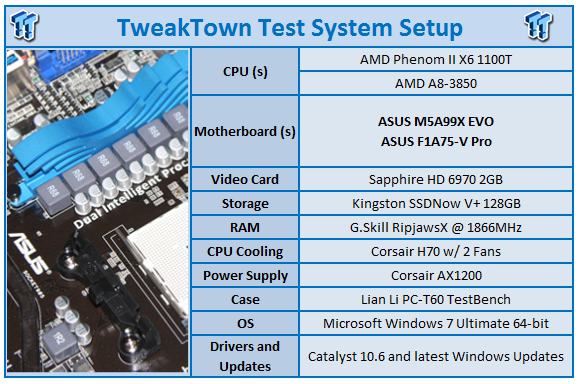 Today we'll be checking out our A8-3850 and ASUS F1A75-V Pro against our ASUS M5A99X Evo with our Phenom II X6 1100T. Before we get into the performance side of things, though, let's first look at what's going on with the overclock.

Since 1.5v on the core seemed to be what a lot of companies were going to prior to the launch, we figured that was a good point to start at. While you can adjust the multiplier up and down, moving up while showing an increase in speed, doesn't actually increase the speed.

What we ended up doing was moving our multiplier down one to 28x which allowed us to push the bus speed up to 125MHz. This results in a clock speed of 3.5GHz which you can see below. 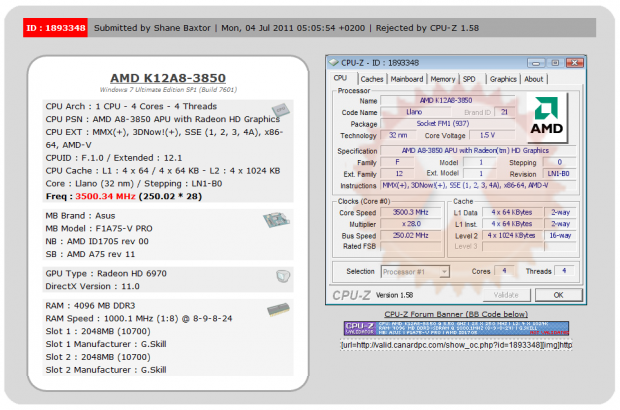 As you can see above, the CPU-Z validation isn't validated and it's probably due to the fact we're dealing with a new processor. With that said, it does still manage to give us all the main details including the clock speed and our RAM which are all correct. 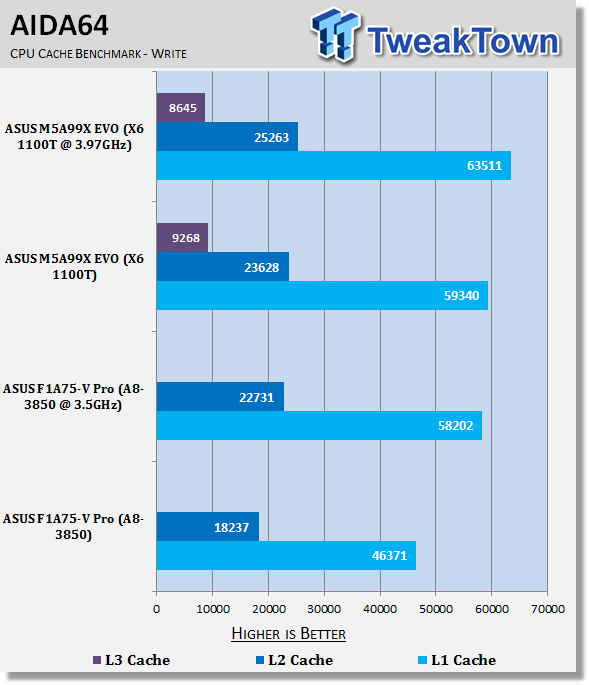 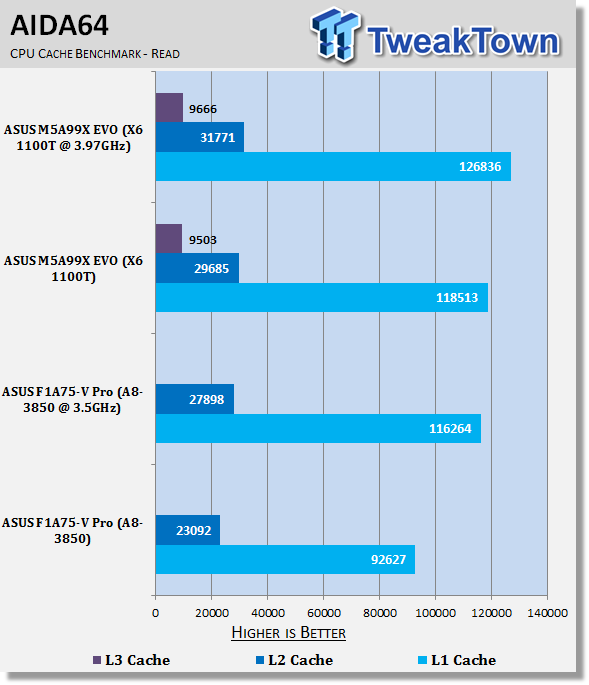 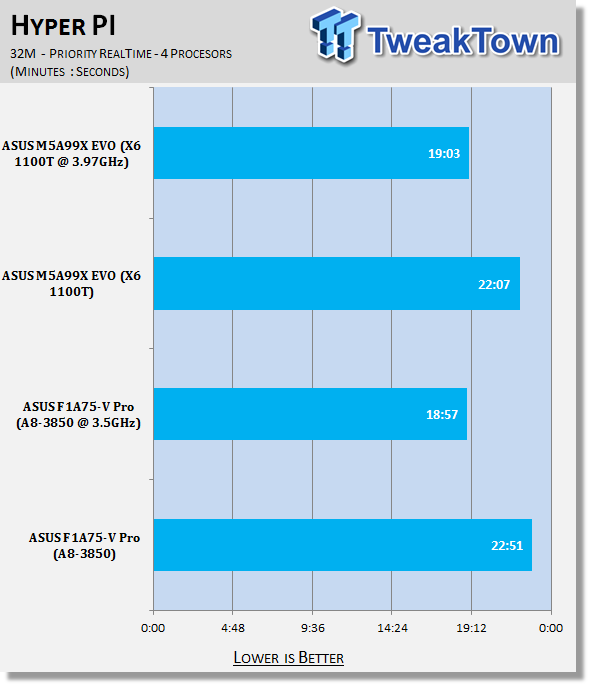 Looking at Hyper Pi, you can see that at stock the time is similar to that of the 1100T. When we overclock, though, you can see that even though our 1100T is clocked at a higher speed, the A8-3850 manages to come in a little bit faster. 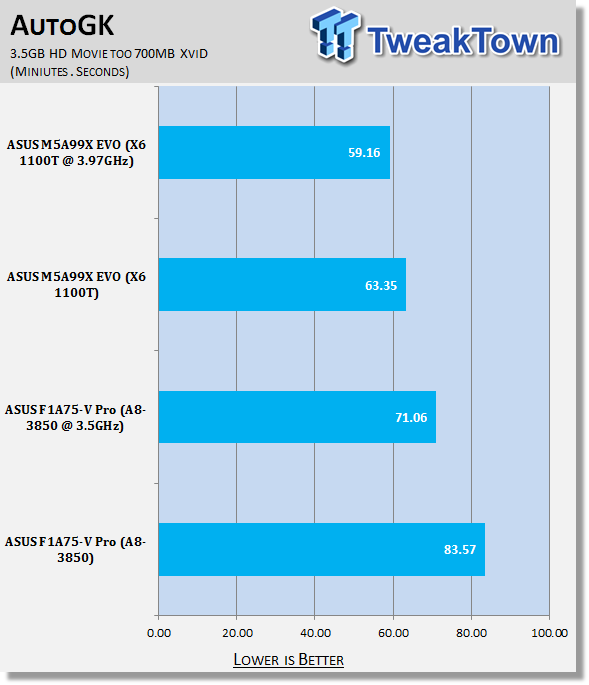 Checking out AutoGK, you can begin to see a bit of a weakness to the APU. Encode time at stock is extremely long coming in at over 80 minutes. Overclocking helps close the gap between the 1100T and the A8-3850, but you can see we're still a little behind the stock clocked 1100T. What's interesting is that the A8-3850 seems to benefit from the overclock a lot more than the 1100T in this test. 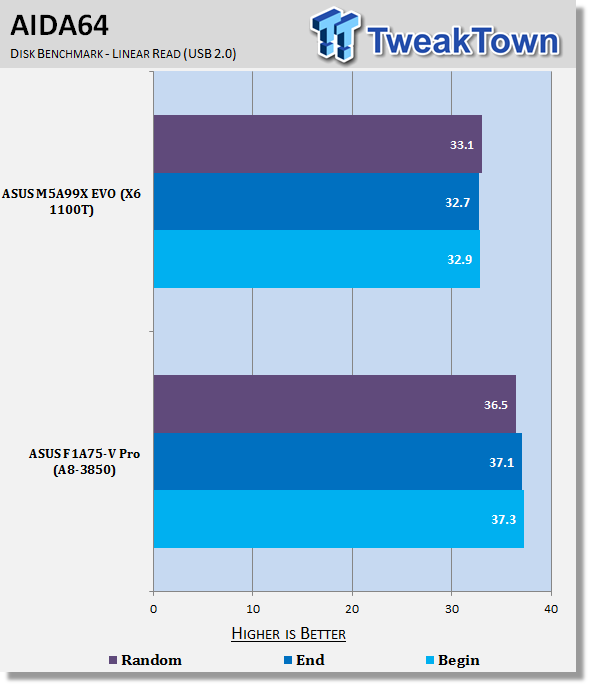 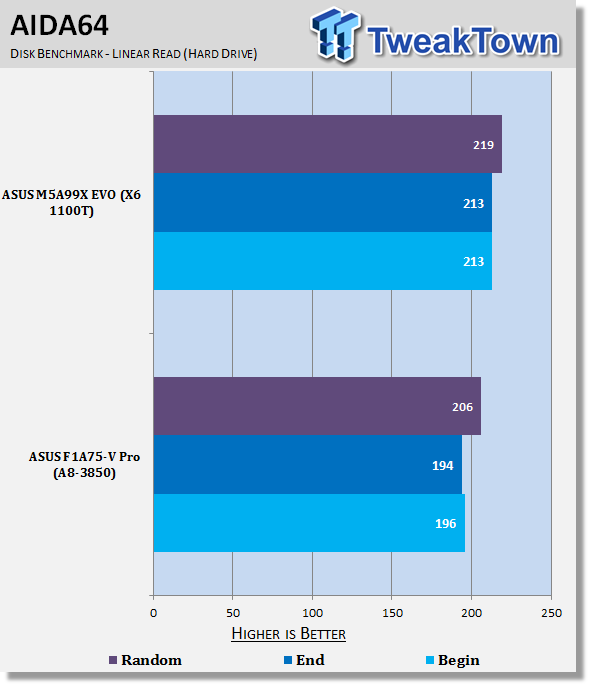 USB 2.0 performance is very strong on the F1A75-V Pro; you can see we've got a clear boost in performance. As for hard drive performance, we can see our SSD sits a little behind the 990X based chipset that our 1100T sits in. 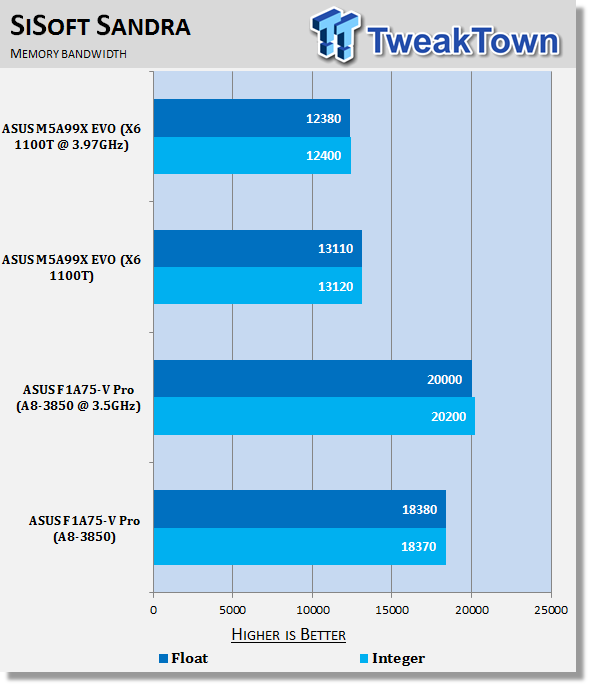 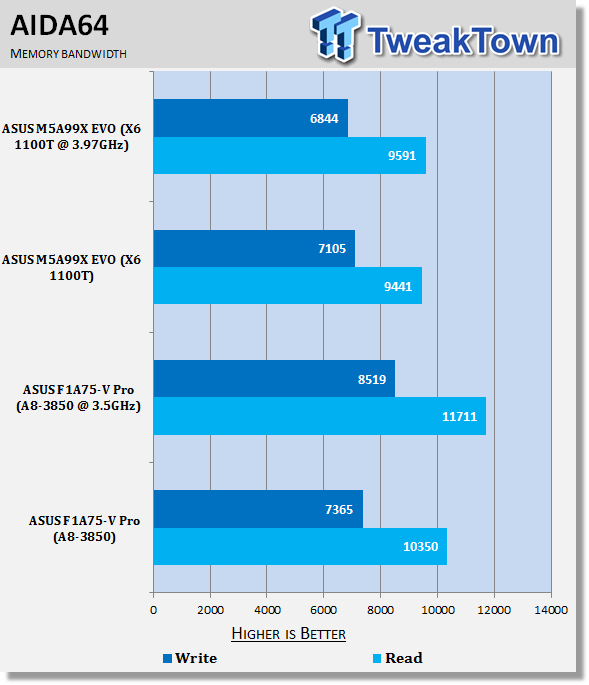 Memory companies have been praising the memory performance of the A75 / A55 chipset and you can see why. An area that AMD has never been the strongest in sees some good improvements on this new chipset. It will be interesting to see if we see more AMD focused memory from companies over the coming months. 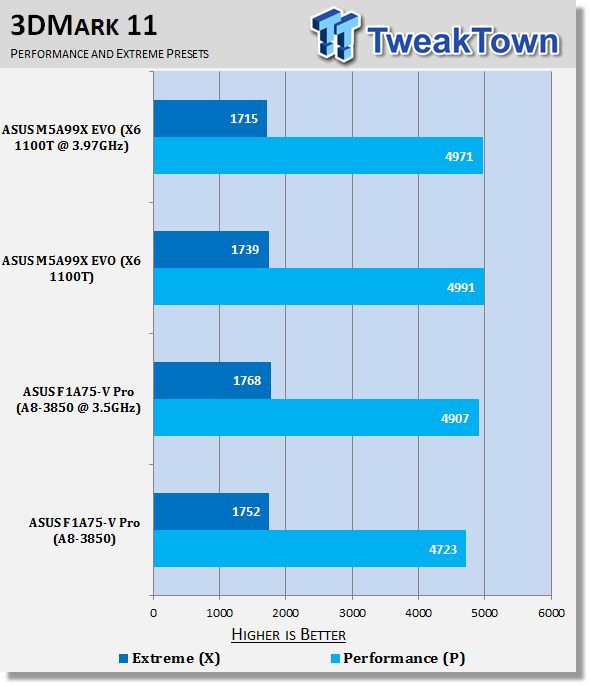 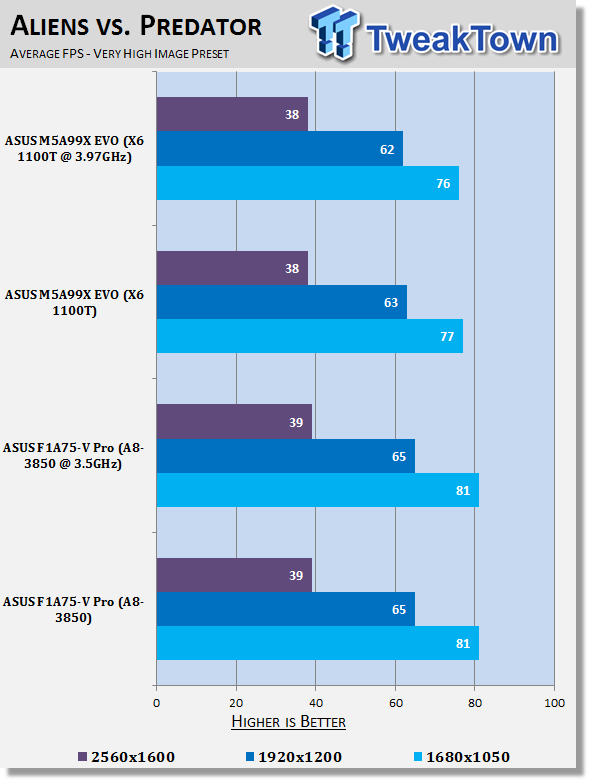 3DMark 11 seems to be hitting a bit of a CPU / APU limitation in the performance preset and you can see it sits a couple hundred points back from our 1100T setup. Overclocked we see that gap close, but it still sits a little bit behind; for the most part it seems that the HD 6970 can't reach its full potential in some areas because the CPU side of things just isn't as strong as something like the 1100T.

Under Aliens vs. Predator you can see performance is a bit stronger than the 1100T. That's because as part of the latest Vision driver suite, the Catalyst 11.6 driver is included which gave us some strong gains over the Catalyst 11.4 we normally test with. If we installed the 11.6 drivers on our 1100T platform you'd find the performance of that setup would line up with this setup. 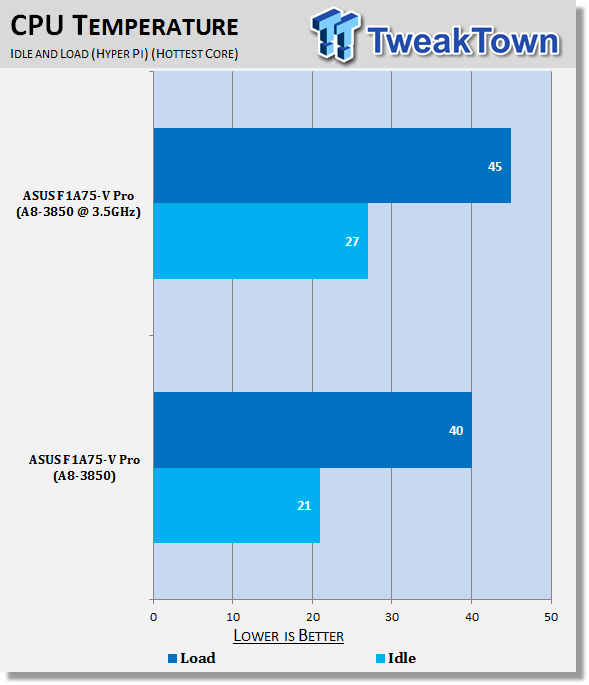 Temperatures aren't that bad and you can see overclocked does bump them up a little, but nothing too major. 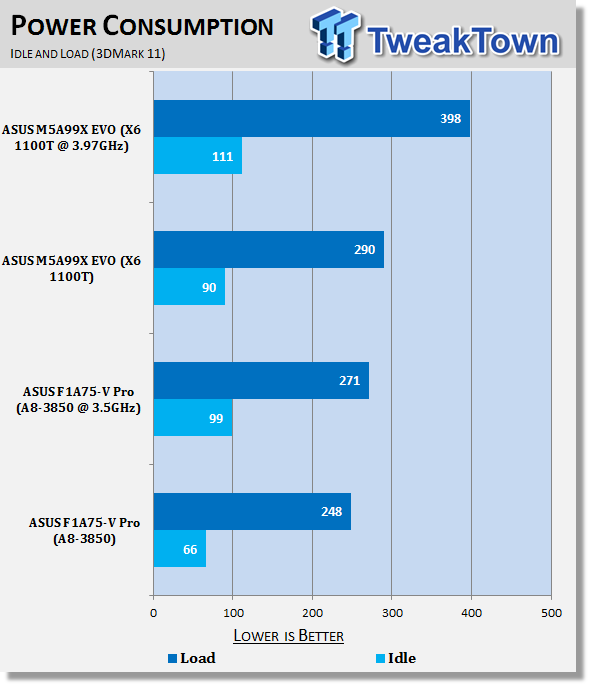 Power Draw is no doubt one of the biggest appeals to the system and you can see that's extremely clear here. Even when the system is overclocked it's not drawing near the same amount of power as the 1100T / 990X setup.

At $129.99 US the ASUS F1A75-V Pro just seems like it's priced wrong and should instead carry with it a higher price tag. It doesn't, though, and this pretty much helps sum up the Llano platform on a whole. Combined with a A8-3850 for $139.99 US, the value of a Llano based system is extremely apparent.

While Llano and the A75 chipset is indeed a cheap platform and probably cheaper than what we're used to looking at, there's some serious performance on offer. While it might not be extremely obvious in some areas, when you start to look at the results here today along with the results we saw in our launch coverage of the platform you can see that for just over $250 US you're getting a great combination.

At the moment there are not loads of boards with Newegg listing only nine. The ASUS offering is one of the more expensive at $129.99 US, but this is a really good board. It follows that typical ASUS quality that we have grown to love. We've got a UEFI BIOS and other ASUS exclusive software that can be installed once in Windows.

Memory overclocking on the board is great and it seems to be better than any other AMD board at the moment because of the quality of the A8-3850 APU. If you're interested in jumping on the Llano bandwagon and want to get yourself a quality motherboard, this is a great option.

It will be interesting to see what else ASUS do with the chipset as time goes on. I'd love to see them bring the ROG name to the Llano platform, because with strong overclocking potential on both the APU and RAM combined with the awesome price point, this is a really nice area for companies that will indeed become a key focus to them over the coming months and years. 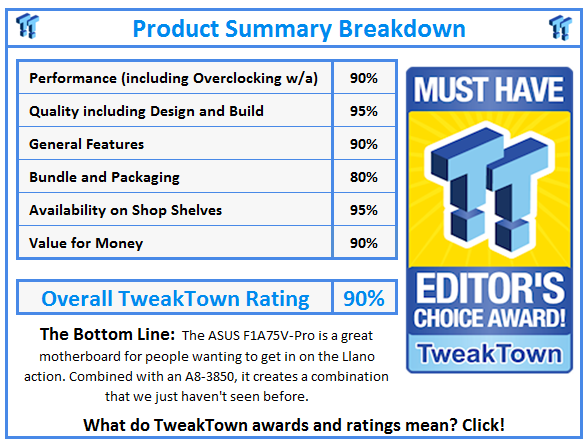