Ahh, the humble ROM drive. Really, it's probably one of the lesser items that don't get the same attention as some other components in the system, but it's also one of the more important components.

Today we're looking at an external one from Plextor and we've got to say, external ones are playing a bit more importance these days due to the fact that we're seeing so many laptops and netbooks with no ROM drive at all. 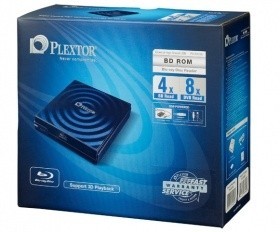 Inside the PX-B120U package there's not a whole lot going on. We've got a single USB cable, some paperwork, a cleaning cloth, driver CD and the drive itself. You might've realized that there's no power connector included and that's because the drive itself is powered by only the USB connector.

Checking out the drive itself, it's got to be said that this is a very good looking external drive. With aesthetics being so important to people these days it's nice to see that Plextor has gone to the effort to make the PX-B120U look good on your desk. Across the top we've got this really nice design which is a similar pattern to throwing a rock into still water. 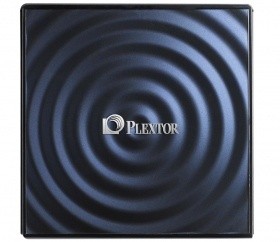 Outside of this, the rest of the drive is quite plain and simple; it's not a bad thing as it's very simple to use and setup. At the back we've got only a single mini USB port. When using the included cable the drive is both powered and connected to the system.

On the front we've got a single Eject button on the left which pops the hood up; a bit different to the standard pop-out design, but what it lets you do is use the drive in a smaller area where you don't need that CD length space for the tray to pop out. The fact it's a little different compared to what we're used to also makes it a little more interesting. 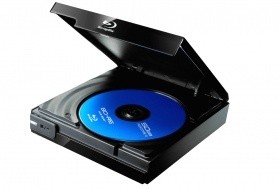 When it came to performance of the drive, we pulled out Nero DiscSpeed 10 to see how the drive performed against our Lite-On iHES208, which is a SATA driven 8x Blu-ray drive. On a 20GB Blu-ray movie (The Mask), our iHES208 achieved up to 7.66x which is close to its limit and an average of 5.8x. The PX-120U managed to hit 3.82x and an average of 2.89x, which are good numbers considering it's only a 4x drive. Its performance is almost exactly half of the 8x drive, as you would expect. It's spot on for what it's rated at and its connection via USB is handy.

Other important numbers include 23 MB/s burst, spin up time of 3.55 seconds and CPU usage at 1x, 2x and 4x are 0%, 1% and 2%, which isn't bad when again considering we're using USB connectivity.

For under $99.99 the Plextor PX-B120U is a really nice buy if you're looking for an external drive that's capable of Blu-ray playback. Limitations are present by the decision to offer USB-only and offer power via the same connectivity. The con to this is that speeds just not going to be as good as a drive that is powered by a separate connector, or something that's internal.

The pro to the connectivity is the fact that we've only got 1 cable. On our test bed the cable was a little short, but for most it won't be an issue as the drive is more designed for a laptop. With that said, we used a USB extension cable and that continued to let the drive work perfectly fine. The inclusion of an extension cable would've been a nice little extra as well, mainly because if your main PC didn't have a BR drive, you could use this as well. And really, the included cable is just a little short for that kind of usage.

All in all, the PX-B120U is a really nice drive. Its performance is good and fairly in line with what the drive is rated at. Outside of the performance and its usefulness, though, it's again got to be said that the PX-B120U is a good looking device. Small and a nice overall design which drops the traditional tray make it stand out. For some the PX-B120U is going to be something that doesn't interest them as they have no need for an External ROM drive, let alone a Blu-ray supporting one. But for others that are in the market for something like this, it's a fantastic piece of kit.