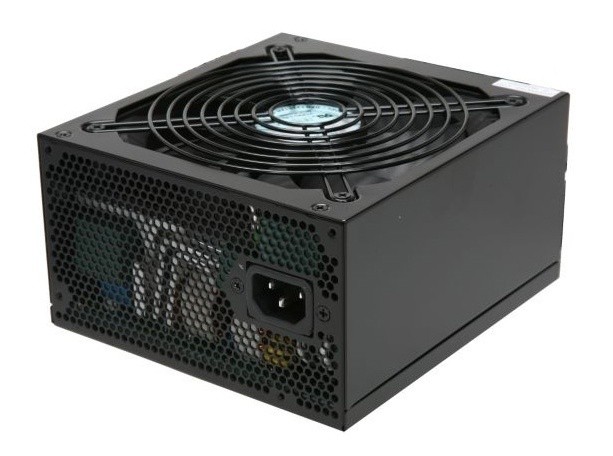 SilverStone has always been well known for their quality power supplies, and rightfully so. When the company was founded in 2003, their first products available were power supplies and shortly thereafter, cases. Since then the company has flourished building upon their strong company policies of outstanding design, perfect quality and customer satisfaction. And they now have a wide range of products to fulfill your computing needs.

Today we get to take a look at one of their latest power supplies. The Strider Plus Series ST1000-P is a fully modular 1000W power supply that boasts exceptional voltage regulation, a single 12V rail and a compact size to allow for a high wattage power supply in some of the smaller and tighter cases. Read on to see how well the ST1000-P performs in our full range of tests and if it is worthy of your hard earned cash.

SilverStone chose to supply 12V power via a single rail in the ST1000-P and provides plenty of power on the 3.3V and 5V rails as well. With very few exceptions, the ST1000-P has all the power you will need for almost any rig under any conditions. 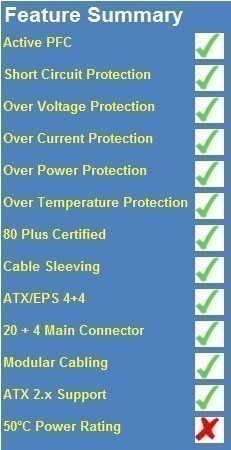 SilverStone packs the ST1000-P full of features and makes sure that you get plenty for your money. It lists for a price of $199.99, but a quick search will yield cheaper results at most e-tailers including Newegg which is shifting it for $184.99 at the time of writing. The ST1000-P has all the features that we look for, including all the power protections and an 80 Plus Silver certification. Note that while the ST1000-P does not have a 50C rating, it is rated at 40C for 1000W continuous output. 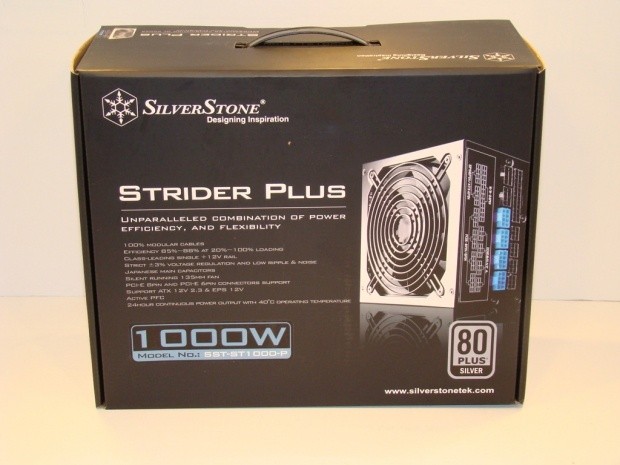 The external packaging informs the buyer of what they are getting very well. The front shows all of the important information to determine whether or not it will suit your needs, including power output, efficiency, support for 6/8 pin PCI-E connectors and more. 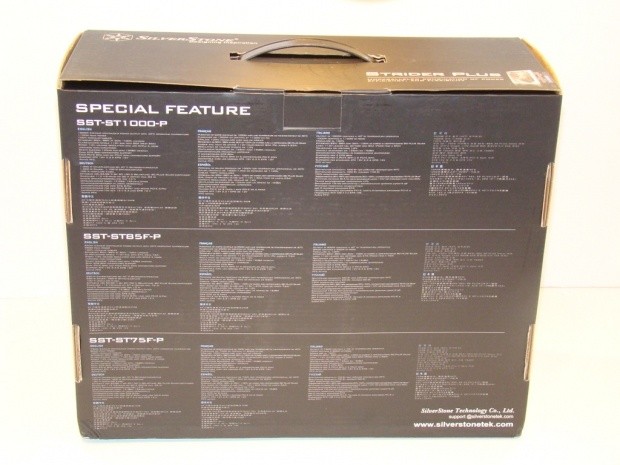 The back simply repeats the information listed on the front, but in a multitude of different languages. SilverStone also uses the same box for the ST85F-P and ST75F-P power supplies and their information is located here as well. 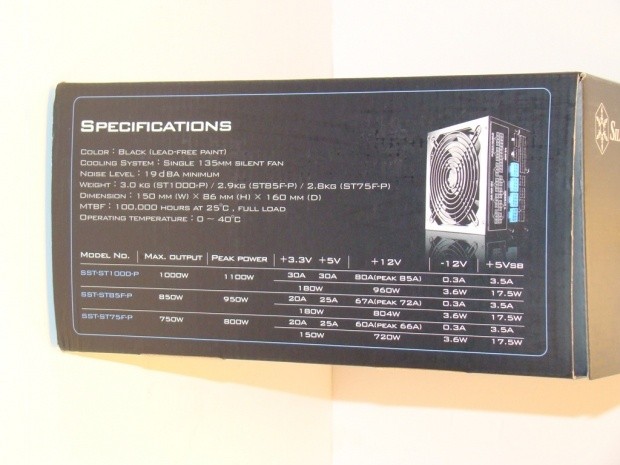 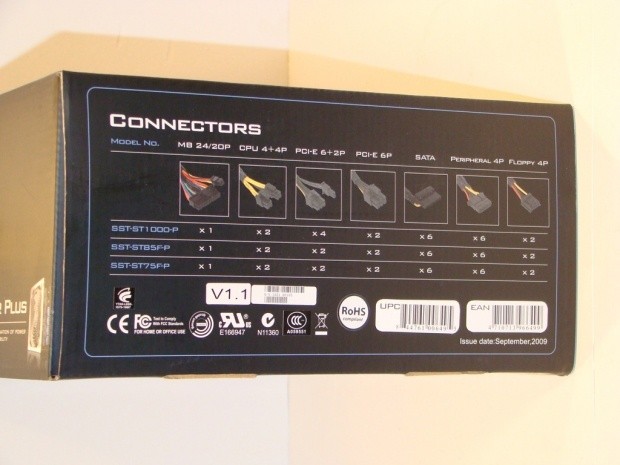 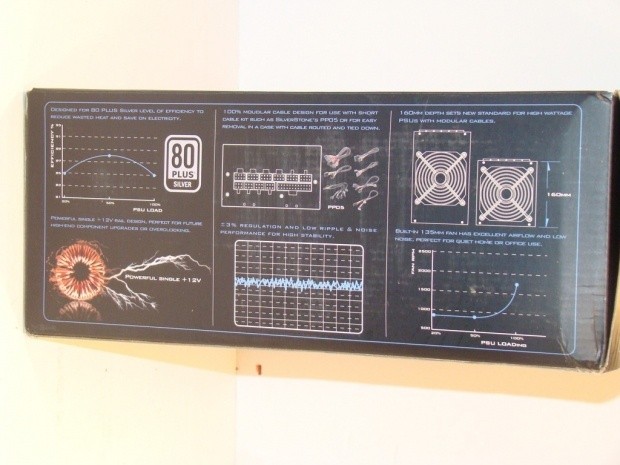 On the sides and bottom of the box we can find some expanded information about specific features of the ST1000-P such as the output specifications, connector availability, fan speed, efficiency, and even the optional short cable kit available separately. 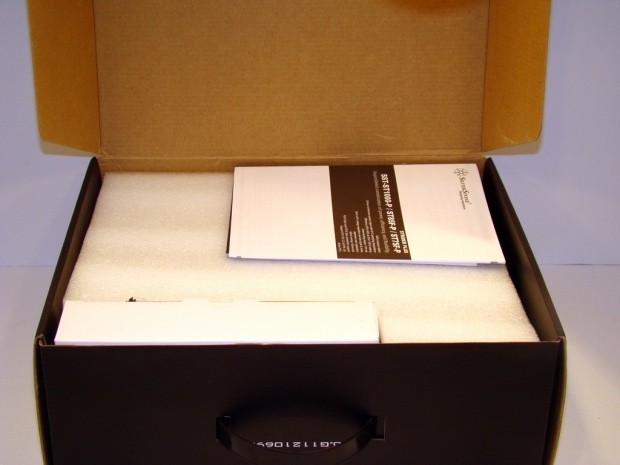 Opening the box reveals the user manual and a tightly packed and well padded box that will ensure the ST1000-P doesn't arrive damaged. The white box in the bottom left corner contains the power cable. 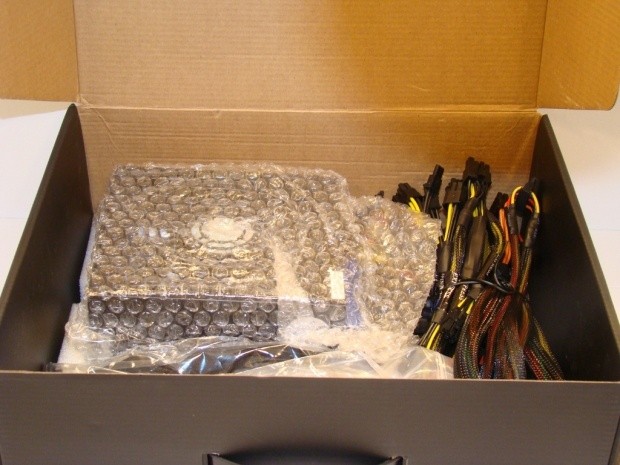 Removing the foam from the top reveals the power supply and a massive bundle of cables. 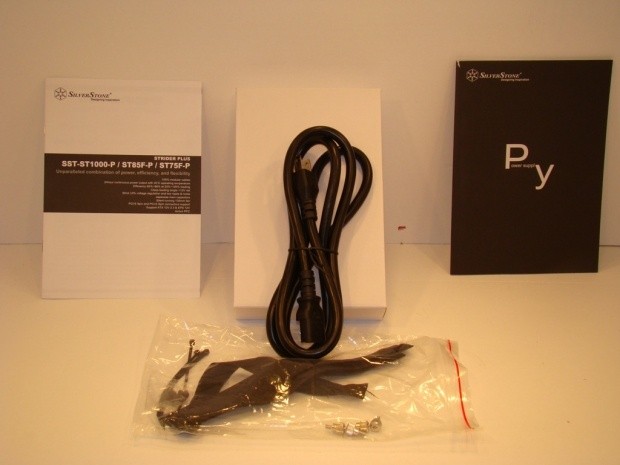 Other than the user manual and power cable, SilverStone also supplies you with thumb screws for mounting and several zip ties along with reusable velcro ties for cable management. 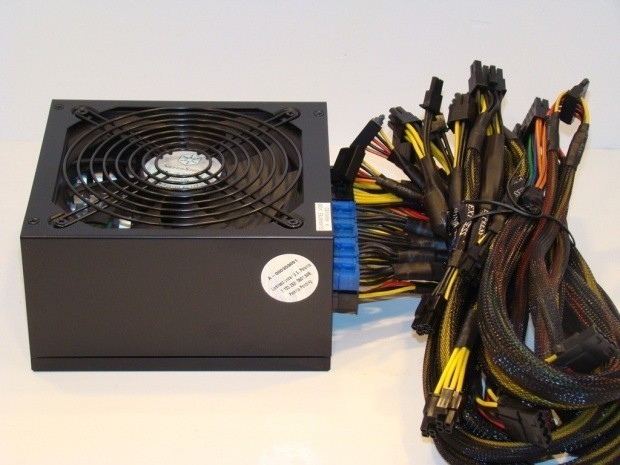 Here we finally get our first good look at the ST1000-P. While most manufacturers choose to ship modular power supplies with the modular cables separate from the power supply, SilverStone chooses to ship the ST1000-P with all of the cables pre-attached. 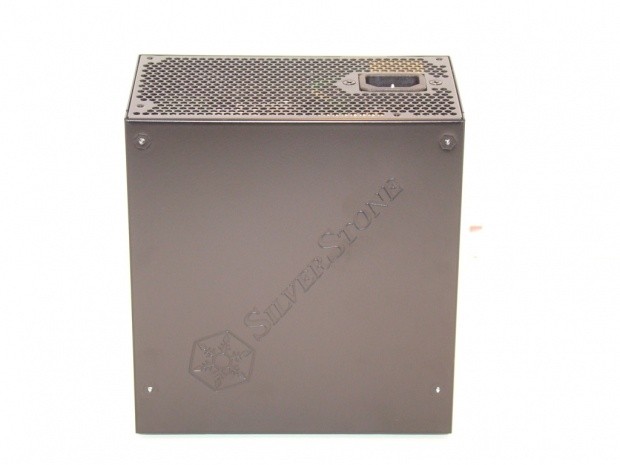 The top is void of information and features a stamped SilverStone logo in the power supply. 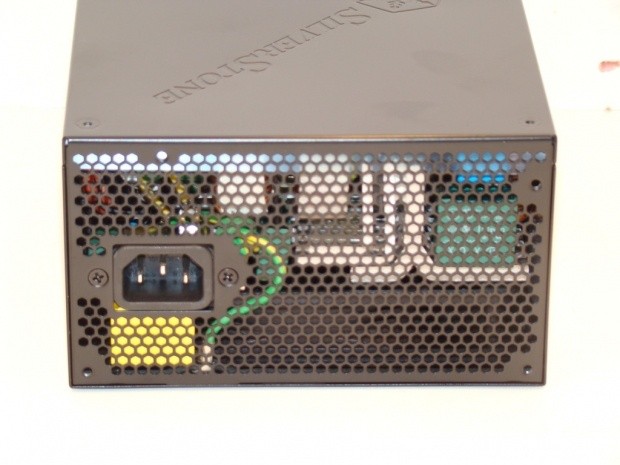 SilverStone keeps air restriction to an absolute minimum on the back of the ST1000-P. The only reason that there couldn't be any less restriction is because of the need for the mounting holes and connector for the power cable. 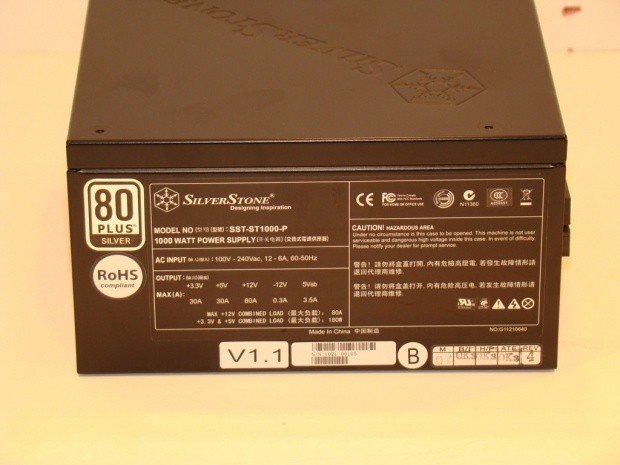 On one side of the ST1000-P is the output specification label, quality control labels, serial number, and an 80 Plus Silver sticker, while the other side is blank. 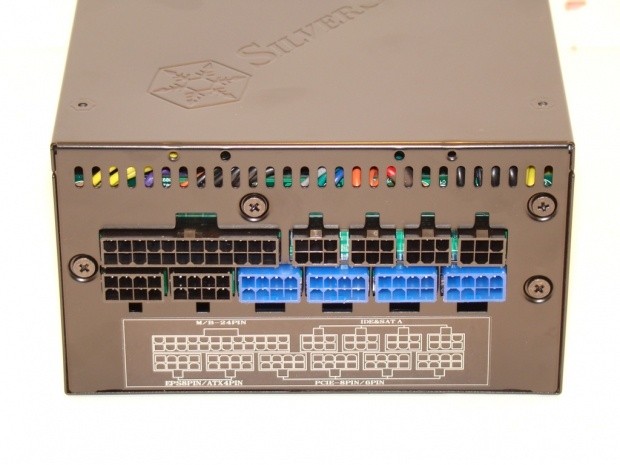 On the front we can see all of the modular connections. Even the 24 pin and ATX 4+4/EPS12V connectors are modular. SilverStone also offers a short cable kit for the ST1000-P for those that don't need the longer cables supplied in the box. 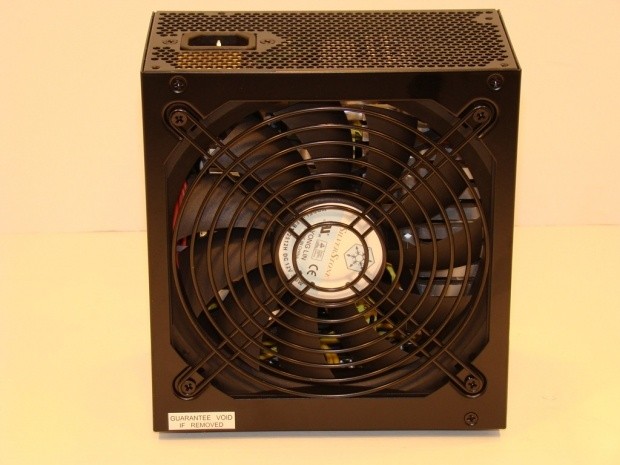 Cabling Arrangement and a Look Inside

The cabling arrangement on the SilverStone ST1000-P gives you plenty to choose from so that you can use the full 1000W of power available. Length of cabling for the most part is plenty for most of your needs, but it is the PCI-E cable lengths that bother me. It seems that someone at SilverStone thinks you need four PCI-E connections at 22 inches.

Since GPU's only require two at most, those who need all six connections might be out of luck if their first GPU is at the 22 inch mark, as it would render two of the connections useless. Sure, an extension could be purchased separately, but that isn't something you want, or should, need to do with such a high end power supply. 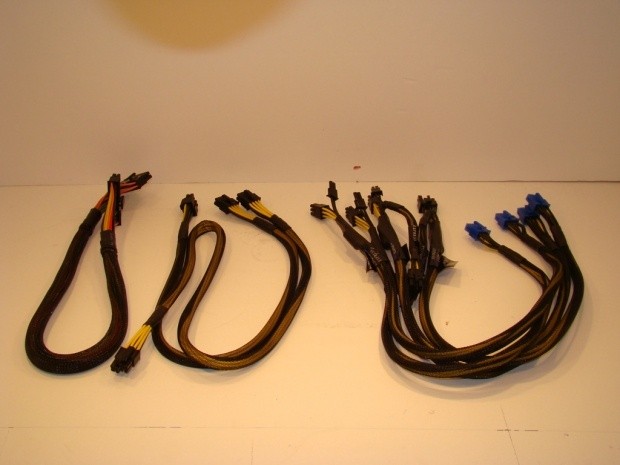 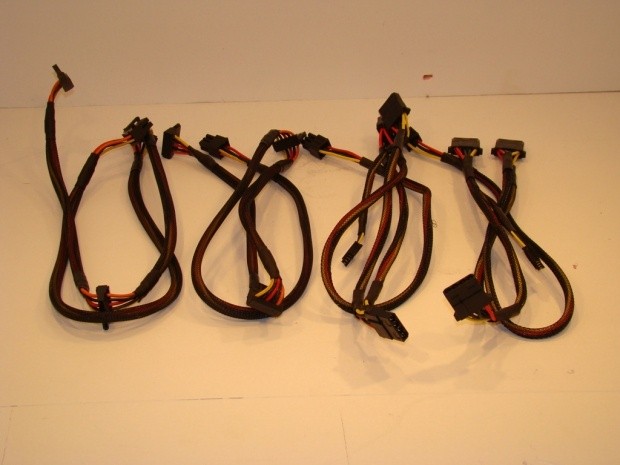 As all of the cables of the ST1000-P are modular, grouping them up just looks like a cluttered mess. Splitting them up for two pictures, we can see the main 20+4 pin, ATX 4+4, EPS12V, and PCI-E connectors in the first picture and the rest of the modular cables in the second. With all of the cables modular, SilverStone offers an optional short cable kit so that your system isn't cluttered with excessively long wiring if it isn't all needed. 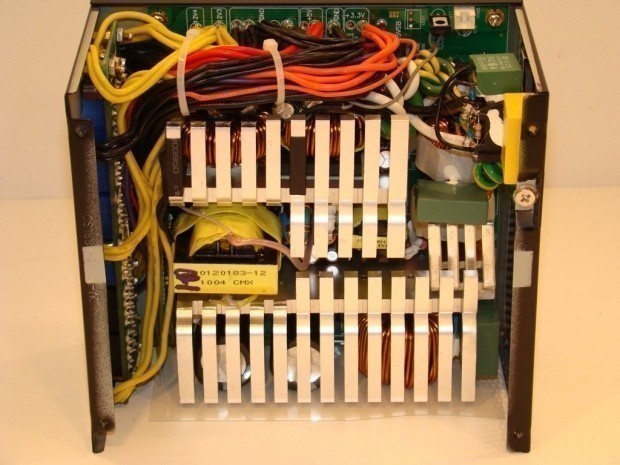 Popping open the ST1000-P, we see the ability for a large amount of heat dissipation via the implementation of heatsinks attached to almost everything. 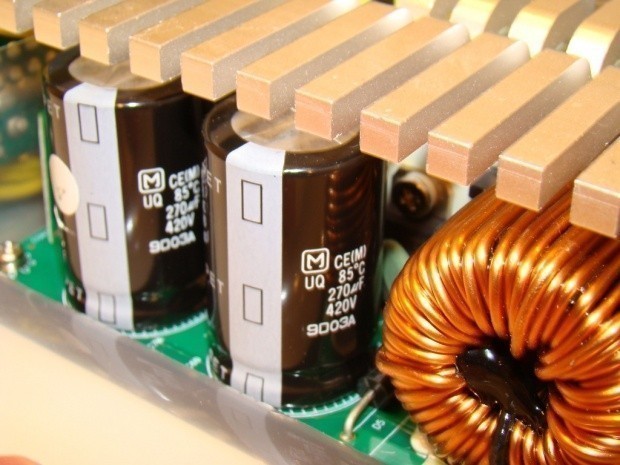 Primary caps are high quality Japanese made and are rated for 105C, but the secondary caps are Taiwanese Teapo capacitors. It is impossible to get a shot of these as they are tightly tucked in behind all the wires.

The tests performed are based around six conceivable setups that are out there and progressively load down the PSU up to the power supply's limits or 1000W; whichever comes first. Since our test equipment's limits are equal to the SilverStone ST1000-P PSU, we can test it to the maximum. 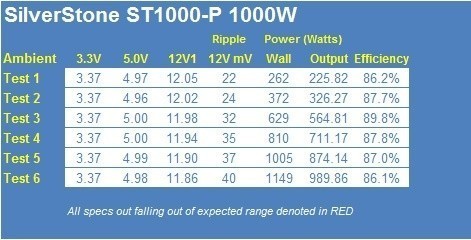 As you can see from the charts above, the SilverStone ST1000-P absolutely excelled in our tests. The voltage regulation is impeccable all the way across the board on what most would say borders on perfection. The 3.3V rail is rock solid at a steady 3.37V and the 5V and 5VSB rails barely change at all. Only the -12V rail showed any significant signs of voltage variation, but even it still stays well within specifications. As far as performance is concerned, one simply couldn't ask for anything better.

As I stated at the beginning of this article, SilverStone is well known for their quality power supplies. Their ST1000-P is no exception and performs better than any other PSU I've tested to date. It's good to see a product that stands behind a company's claims of quality and design. Silverstone has scored big with the ST1000-P.

Buyers themselves also score big with the ST1000-P as it offers something exceptional for what you spend on it. The performance alone is well worth the cost of the ST1000-P which is also competitively priced amongst similar units. Adding in the 3 year warranty, the option for shorter cables if needed, relatively high efficiency and some included cable management just seals the deal to where you can't go wrong at all with the SilverStone ST1000-P.