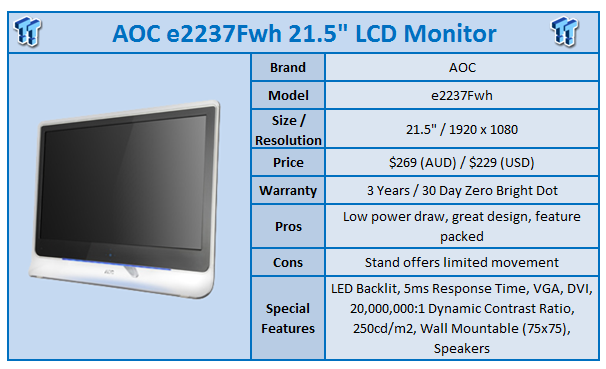 While LED backlit technology has been floating around for a while now, we've really only seen TV companies make use of it. Recently we've begun to see press releases start floating around with computer monitors jumping on the bandwagon and today we'll be checking out the AOC e2237Fwh which utilizes the said technology.

Looking at the full colour box, there's a fair bit of information being shown, but nothing too out of the ordinary. Its size is good and all the main features are mentioned on the front. We'll get into them in just a moment.

As for inside, we've got the monitor itself and a little stand, some standard paperwork along with a driver CD and cleaning cloth. In the cable department we've got a power cable / transformer along with VGA, DVI and HDMI cables. Also included are some stickers which are designed to go on the monitor. Personally I think they're a little tacky and would just avoid them.

On the specification front the numbers are quite impressive. The main feature is the LED backlit panel. Not only does it help offer 20,000,000:1 Dynamic Contrast Ratio, but it also keeps power draw and thickness down. We've also got 16.7m colours, 250 cd/m2 brightness, 5ms response time and a Full HD 1920 x 1080 resolution. 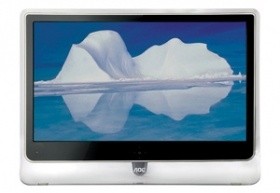 Pulling the monitor from the box for the first time, you get a real elegant feel thanks to it being only 22mm thick for the most part. Only at the bottom does it come a little chunkier. The clear border around the black looks nice and the bottom is used as part of the stand. 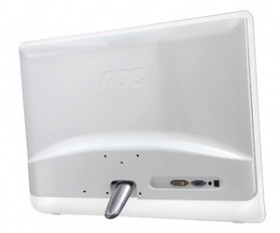 The rear of the monitor has a little stand along with our DVI, VGA, HDMI and Power connection ports. Also included is a audio jack and while you might not be able to see it, there's speakers in the monitor which is a nice addition. Sure, you're not going to be enjoying Pearl Harbour in DTS HD on them, but they're fine for some YouTube videos and other kinds of entertainment. 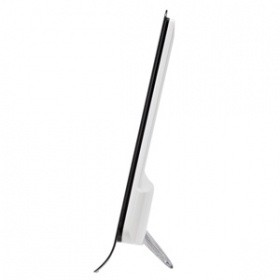 Once turned on and in Windows, the monitor really pops. That's mainly thanks to that LED lit screen which does look great. Coming in at 21.5", the 1920 x 1080 resolution looks sharp and everything is nice and clear.

Checking out the OSD, we don't run into the same problem as the iF23 which required software. Instead we're ready to go with a beautiful touch sensitive setup that's really easy to use. You hit the Power button, four little dots show up and then the Power button is used to enter and exit menus, while the four buttons are used for navigation.

Getting into the nitty gritty, colour representation is very good with the difference in blacks being seen at .4% and whites at 1%. On the bleed front the monitor is FANTASTIC. On a solid black and white screen you just can't see any bleed. This is thanks to the LED backlit technology for the most part; it really helps keep the lighting even across the board.


In standby we're drawing up to .9w with it bouncing mainly around the .7w and .8w mark. AOC quote .5w, so we're alright. It becomes difficult at these very low wattage numbers when only .1w or .2w separates them.

When running with the out of the box settings, we're drawing 20.2w, which coincides with the 25w typical number AOC quote. Changing the presets via ECO Mode, we begin to see a bit of change in numbers. At default we're set to Game which gives us the 20.2w number we just quoted. Moving to text which darkens everything up; that number comes down to an even 16w. Moving to Internet boosts the brightness a little and takes that number to around the 17.5w mark.

In games, the performance of the monitor is good. It's not great and you can tell that it's really more so designed for an environment where a person doesn't do loads of gaming. With that said, in no way is the e2237Fwh painful to use in games. It's clearly not as strong in this area when compared to some other monitors we've looked at, though, which must be mentioned.

Outside of all that, there's a few other stand out points that need to be mentioned. As far as features go, AOC offer us something called i-care which uses a sensor to adjust the brightness of the display. This helps keep power draw at a minimum with it using only the brightness it needs, instead of just having it on "Game" all the time.

Something else that needs to be said is what AOC has dubbed the "Desk Light". To be honest, I thought it was a little corny initially, but it's actually really nice. Across the bottom of the screen we've got a blue light that AOC say in the dark helps you see your keyboard. To be honest, though, it doesn't really; not anymore than the actual monitor does, but it looks really nice and just adds to the aesthetics. In the event you don't like it, or it's too bright, you can turn it off or just dim it via the menu.

I mentioned in the iF23 review that when thinking of AOC, cheap looking and cheap priced monitors came to mind. Having a look at what AOC are offering these days, however, and that just can't be thought. The e2237Fwh might be a bit of a tongue twister, but is a really beautiful monitor that offers some fantastic features. The impressive power draw, LED lit design, built in speakers and great design are to name just a few.

When it all comes down to it, the only gripe we've got with the e2237Fwh aside from the model number being long and awkward is the fact that the stand it uses gives us limited movement options. Apart from that, though, the monitor is nearly flawless considering its price and the market it's aimed at and while it won't shine in certain areas, the budget hunting users who want a feature packed monitor with good picture quality will love it. We're not dealing with an IPS panel that's 3x the price and that's something that has to be noted.