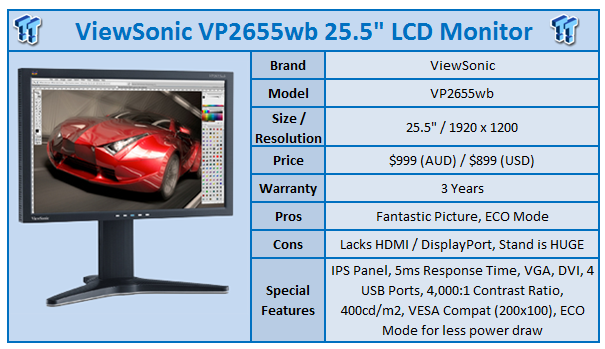 While some people may choose to let the price of a monitor determine which model they'll buy, some choose to dive a little deeper and base the purchase on the panel the model has opted for. Ultimately we've got two choices; TN which tends to favour gamers and people on a budget, and IPS for those who want higher quality and are happy to pay a little more for it.

The latest screen to grace us with an IPS panel comes from ViewSonic and is the VP2655wb. The first thing we have to say is, the box it comes in is massive! Unlike a lot of larger displays that separate the stand and panel to help keep the package down, ViewSonic has left it connected, which results in this massive box which is going to bring with it a nasty freight bill.

Inside we've got a huge amount of packaging to help protect the display. We've also got a power, USB. DVI and VGA cable along with some paperwork and a CD. Really, we've got everything you need to get up and running as soon as possible.

With the package out of the way, it's time to have a closer look at the monitor itself. We've of course got the IPS panel which is the main feature of the monitor; that brings with it 4,000:1 Dynamic Contrast, 400 cd/m2 brightness and a 5ms response time. Connectivity isn't as strong as some recent monitors we've looked at with only DVI and VGA being offered along with four USB 2.0 ports.

The monitor itself is really big outside of the screen that is 26" (or 25.5" viewable). The stand is just massive; it seems just over the top massive. To give you an idea, the dimensions without the stand are 595mm x 389mm x 100mm and with, 595mm x 389mm x 388mm. The stand itself takes up almost 40cms which is just huge and when you're setting it up you really notice it. Something else is the thickness of the screen which is very bulky. The latter doesn't affect you so much, though. 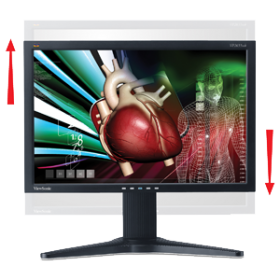 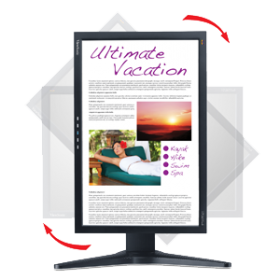 The overall design of the monitor is very plain like we've seen from most IPS screens. I think the reason for this is the panels are designed for more professional use and its target market doesn't want anything too loud. Instead the let the panel do the talking.

The understated design is something I'm quite a fan of. Whether you like it or not will be personal preference, though. The screen itself does give us the ability to move it around in most ways; left to right, up and down along with pivoting it to portrait. 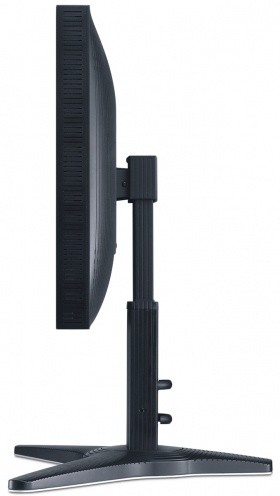 The VP2655wb offers us 1920 x 1200 which I feel is a lot nicer than 1920 x 1080. You'd be surprised at just what those extra 120px do for screen real estate. In saying that, considering its large size and the fact that we've dealt with some 1920 x X screens over the past few months that have been as small as 22"s, I was a little worried the dot pitch would be a little too high on this monitor as it carried a similar amount of pixels, but instead spread it across a larger area. 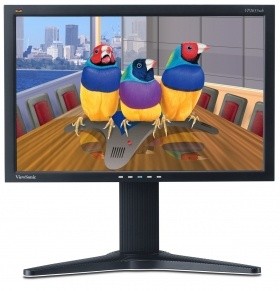 Once turned on, though, the VP2655wb stood out like a full moon on a cloudless night. When getting into Windows and seeing our background, everything just popped out at us. We decided to use it instead of our much older 30" 2560 x 1600 screen for some mid range video card benchmarking that didn't need to go higher than 1920 x 1200 and the picture was just stunning.

The IPS panel alone is beautiful, but the VP2655wb really looked amazing in our games including bright ones like Far Cry 2 and darker ones like Batman: AA. Sure, you've got those same issues as other IPS panels in where we've got some ghosting when you really look closely, but honestly, it's not something you notice easily.

While we had a little bit of bleed on the left side, it was only visible on a completely black background. HD content looks good, especially since it's larger than some of the recent displays we've looked at. You do get borders on native 1080p content due to the 1920 x 1200 resolution, though.

In standby we're drawing 1.8w and while ViewSonic say typical power when running is 100w, we ended up with only 69.5w which isn't the lowest we've seen, but is lower than the Dell U2711. That monitor does carry with it an even higher resolution, though.

Within the quite boring looking, but really easy to use on screen display, there's ECO mode which adjusts the brightness of the monitor. This of course drops the power needed and turning to optimize gave us power draw of 46.4w and conserve was 41.7w. This comes at the cost of brightness, but it may not bother you, depending on what you're working on and the light conditions in the room.

The few things I don't like about the VP2655wb include the huge stand which just seems unnecessary and does nothing for the box, which is now huge as well. The lack of extra inputs is also a little bit of a bummer as more and more people hook consoles and other devices up to the monitor alongside the standard PC to get better value out of the unit.

What I do like; actually, make that love, is the screen. It might not carry the same resolution as the U2711 from Dell we looked at, even though its size is similar, but honestly, ViewSonic are offering us just a beautiful picture on the VP2655wb and really, when it comes down to it all, that's the most important aspect of a monitor. This beauty comes at a cost like all IPS screens; you just need to decide if you're happy to fork out that amount of money.