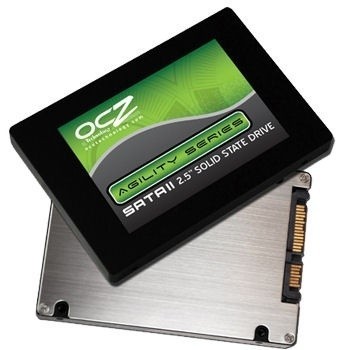 
When solid state drives first started entering the consumer market, OCZ Technology lead the charge. The company was one of the first to sell low cost drives that brought the technology out of the enterprise and into enthusiasts' hands. Ever since the first Core Series SSD was released OCZ has lead the way in consumer SSD innovation and is often the first to market when a new controller is offered.

When it comes to solid state drives, most people tend to think of the technology in 2D terms, kind of like a sliding scale. The controllers come from just a few companies; JMicron, Samsung, Indilinx and Intel and the products brought to market from these controllers tend to line the scale in that order. OCZ plays the game differently, thinking in 3D, adding an additional slide to the scale. This 3D approach to the OCZ SSD product line means that you will need to become more involved during your research stage of the buying experience. Luckily OCZ has done a fabulous job of detailing the product information on their website and divided products according to their speed instead of product launch date.

Today we are looking at the OCZ Technology Agility Series, OCZ's mainstream SSD. The Agility is just one of many drives sold by OCZ that uses the Indilinx Barefoot controller. Let's have a look at the Agility specifications and see what sets this product apart from other Indilinx drives sold by OCZ. 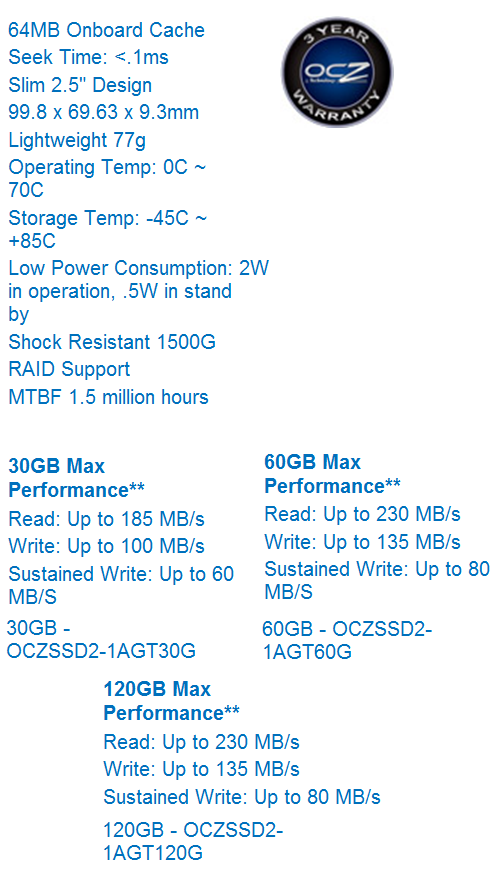 OF the nine solid state product lines currently offered by OCZ Technology, six use the very successful Indilinx Barefoot controller. We can quickly eliminate the Mac specific Vertex Series drive, leaving us with a total of five PC drives. The Vertex EX and Agility EX drives use higher cost SLC memory and are considered the flagship products from OCZ. The Vertex Turbo is next on the list and it features higher host and cache clock speeds, 180 MHz compared to 160 MHz for standard Barefoot controlled drives.

We are left with the OCZ Vertex and the drive we are looking at today, the Agility. When companies design a product they detail each component and make a Build of Materials (BOM) list. When the BOM changes, usually a product is given a new revision number; worst case scenario it is logged in the batch number. As we all know, memory, be it DRAM or NAND flash, can fluctuate in price daily; there is even a sort of RAM stock exchange. This is where the Vertex and Agility differ. The OCZ Vertex has a fix BOM and the Agility has a flexible BOM. It really comes down to the NAND flash memory; the Agility could potentially come with different memory at a later date. Our sample used Intel / Micron flash, but it is possible that another drive purchased off the shelf could have Samsung flash. To be honest, it really isn't that big of a deal unless you are running a pair or more drives in RAID. A good way to avoid the RAID scenario issue would be to purchase all of your drives at the same time.

Now that we have looked at the Cliff Notes of the OCZ SSD product line, let's get to the Agility in detail. Like most SSDs, the more capacity present, the faster the drive. OCZ claims the Agility is capable of up to 230 MB/s read and 135 MB/s write speeds.

Like most SSDs sold, the Agility has a 2.5 inch form factor, making it a drop in replacement for nearly all notebooks. OCZ sells a 3.5 inch form factor adapter plate, making for an easy install in a desktop computer.

OCZ Technology is now in several retail and e-tail stores, including our go to spot Newegg. The 30GB drive at Newegg is currently being offered for 159 USD, one of the lowest priced Barefoot drives on the market. The 60GB and 120GB drives are also available from Newegg for $214.99 and 369 USD. 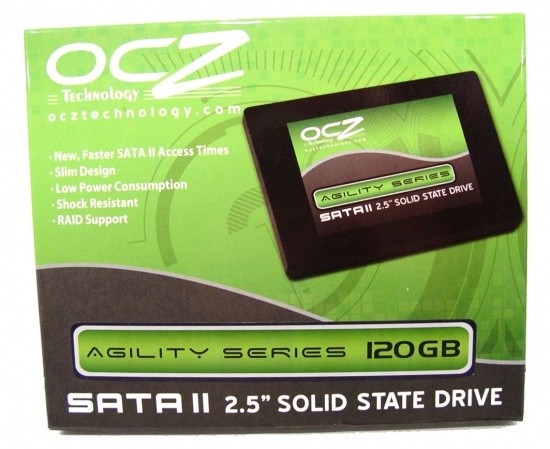 OCZ has a retail friendly package for their Agility Series drives. On the front we are able to find the capacity information as well as some of the features. 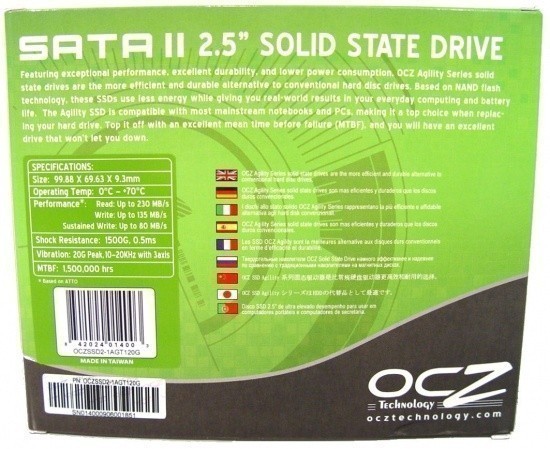 The back of the package has a specifications list and some benefits of solid state drives. 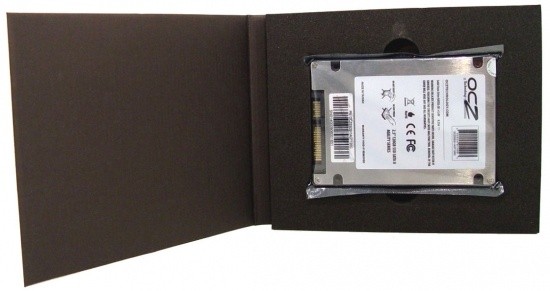 The inner package is made of hard, close cell foam and it does a really good job of keeping the drive secure during shipping. 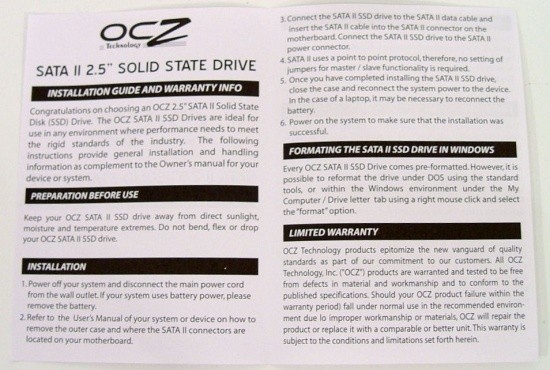 OCZ ships the Agility with a generic manual that will walk you through some of the general details on installing the drive in your notebook or desktop. 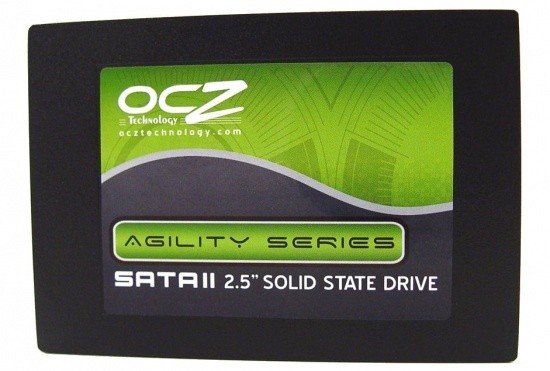 The Agility uses a black aluminium case that is on par with the other Barefoot drives we have looked at in the past. 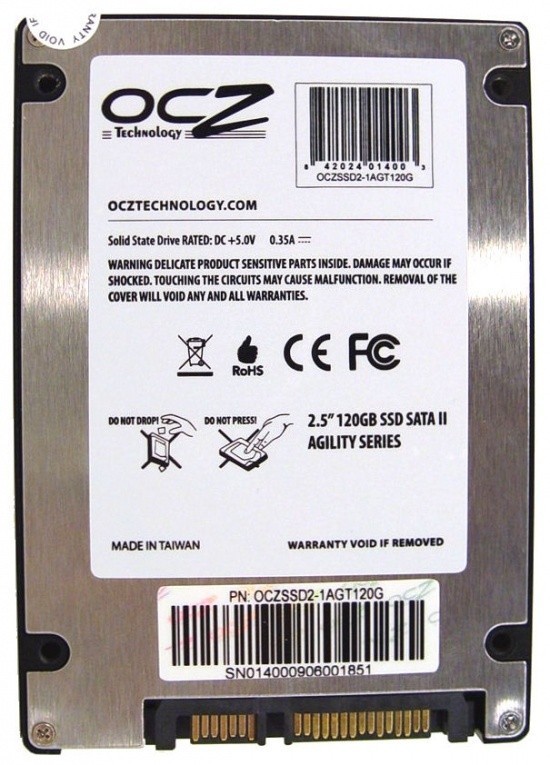 The back of the drive is also aluminum and has all of the product and serial number information.

The power and data ports are in their standard locations. The Agility also has a jumper on the side, a feature we have not seen in an Indilinx controlled drive for some time. 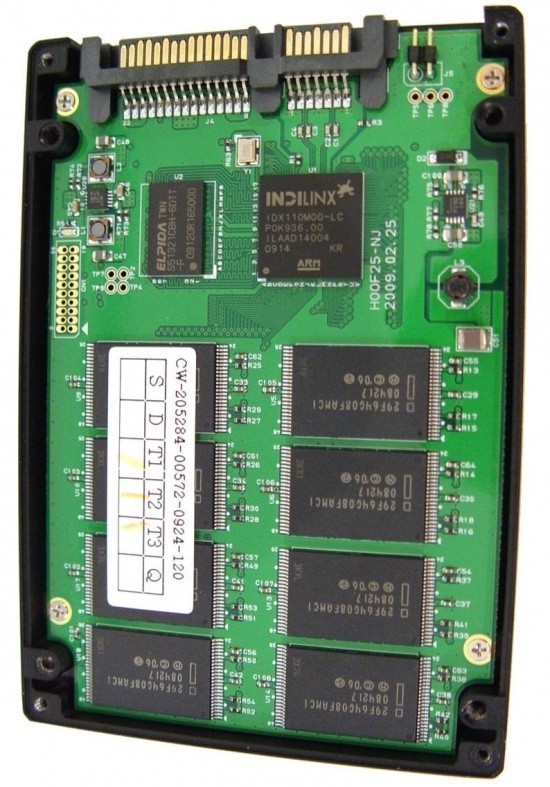 Our drive used Intel flash memory, but your mileage may vary depending on when your drive was manufactured. 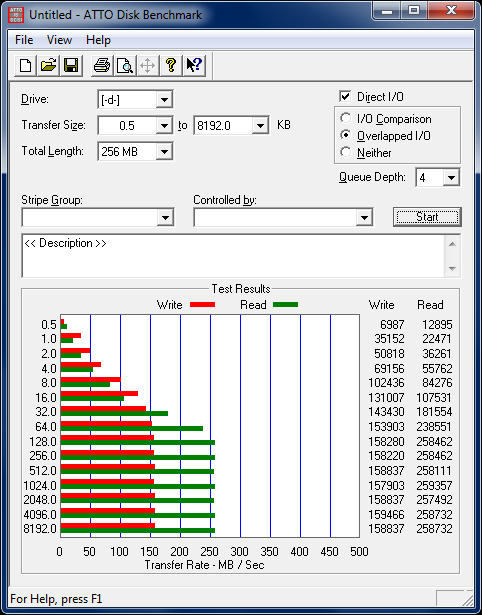 The OCZ Agility performs much better than the published numbers shown on OCZ's website. This was a pleasant surprise, but we were expecting this since the other Indilinx Barefoot drives we have reviewed have performed similarly. 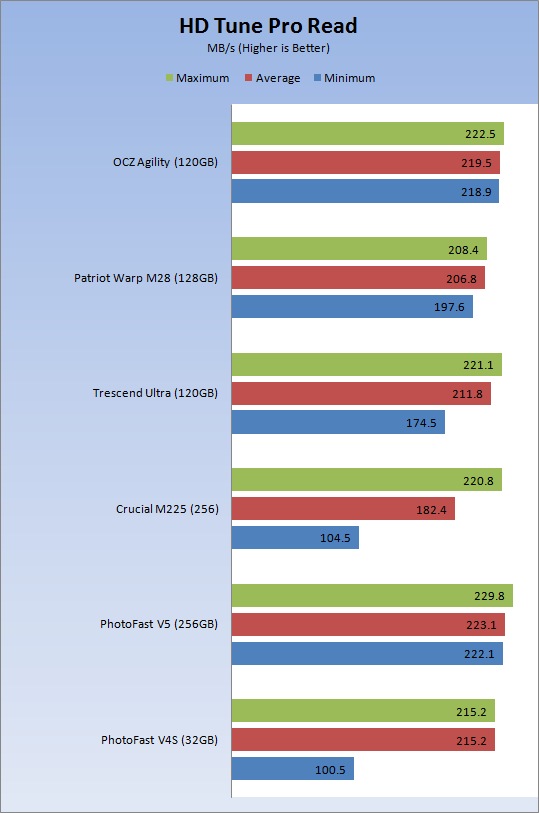 Every drive listed on out chart for this round has an Indilinx Barefoot controller on board, other than the Patriot Torqx M28. The PhotoFast V5 is a RAID 0 product and the V4s uses SLC flash. The direct competitors to the OCZ Agility are the Crucial M225 and Transcend Ultra.

The STR read speeds of OCZ's mainstream SSD are comparable to the products of the competitors' high end flagship models. 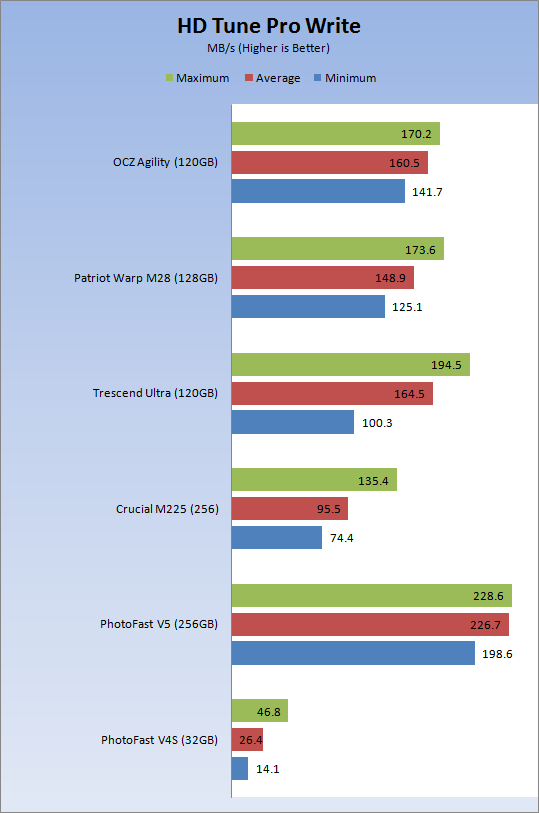 The STR write speed of the Ultra is a little faster than the OCZ Agility in maximum and average speeds, but the numbers are not too far from each other. 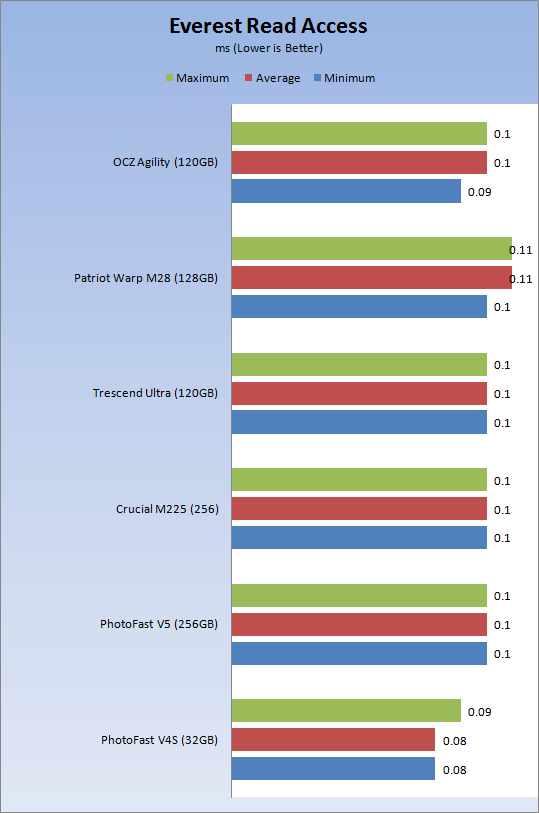 Random access time is where solid state drives make up so much ground on traditional hard drives. Here we see the Agility running on par with the rest of the competition. 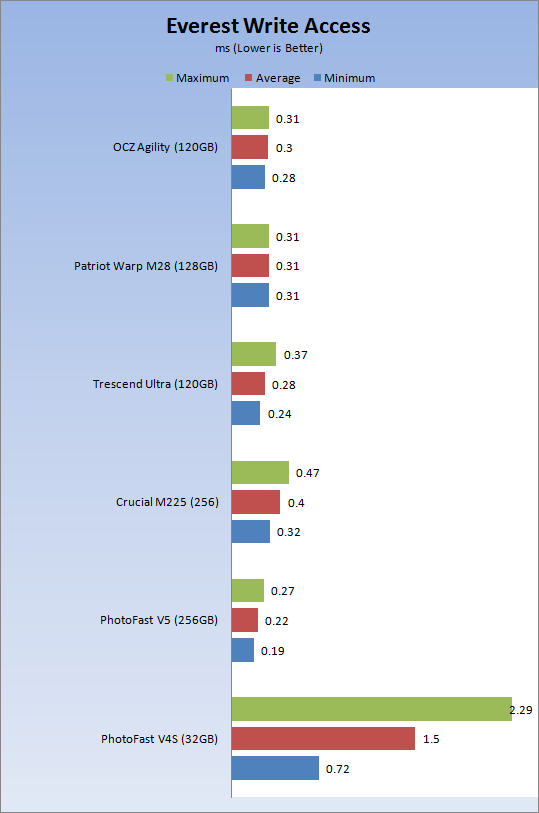 The Agility is also on par with the herd for write access times as well. 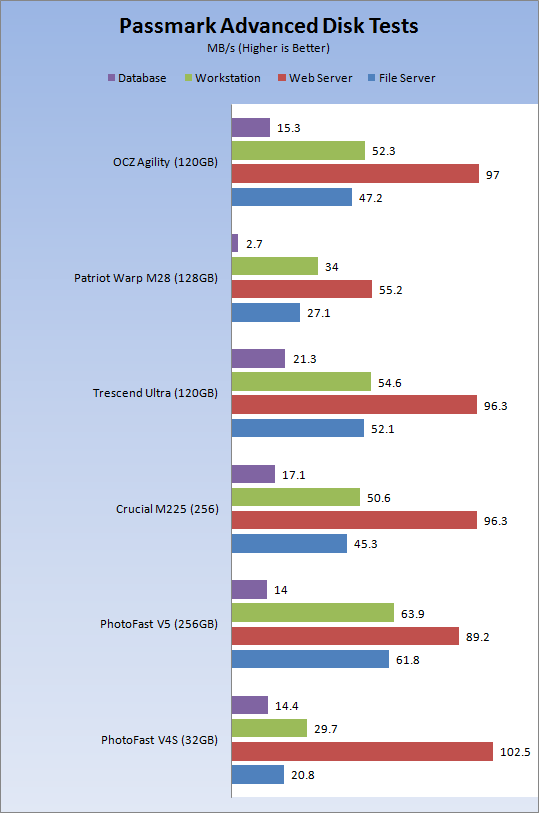 Once again we see the Barefoot dominating the Samsung controller. Of the standard Barefoot drives the OCZ Agility performs admirably and is even able to beat the RAIDed PhotoFast V5 in a couple of tests.

OCZ Technology has attacked the solid state market head on and is leading the charge. The Agility is the company's base, mainstream product and it is able to outperform some of the competitors' flagship drives. This makes us wonder just how fast the upper tier products from OCZ really are. Being the entry level, the cost of the Agility is quite a bit cheaper than the other drives like the Vertex Turbo, Agility EX and Vertex EX. OCZ releases more firmware updates than any other manufacturer and for the most part they release the updates before anyone else.

The drive we reviewed today, the Agility in 120GB form is currently available from Newegg for under 370 USD. The 60 and 30GB drives are now all the way down to $214.99 and 159.00, very competitive pricing when looking at similar drives in the same category.

The only thing that really hurts the Agility is the fact that the 120GB OCZ Summit costs around 30 Dollars less. The Summit is listed as being part of OCZ's Performance Series of products, but uses the Samsung controller. We have looked at several Samsung controlled drives and to date they have all performed right around the same, but given that OCZ has managed to squeeze just a little more out of all their SSDs we can't very well claim that if you've seen one, you've seen them all.

So, where does that leave us; the Summit or the Agility? - The jury is still out but from past experience I would go with the Summit for RAID due to Samsungs hardware garbage collection and the Agility for single drive use.