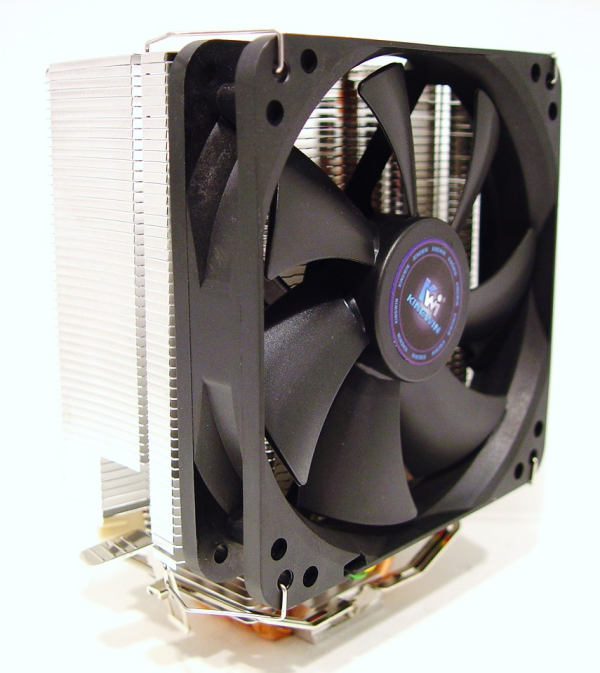 
When discussing on forums what to buy next, or what has the best bang for the buck, a lot of the smaller companies are left out of the conversation. To me there are good reasons for this. First off, there is the unknown factor. Without many reviews around it's hard to get a grasp on what these companies offer. Secondly, they just don't get the advertising space on the major sites, announcing their presence in the world. With this company's entry to the marketplace in 1992, they are starting to create a name for themselves.

Kingwin is the company we have the pleasure of working with this time around. They are better known for their Mach 1 power supplies, but make storage solutions and coolers as well. Kingwin entered the market with the idea that each PC has its own individuality and get used more and more in our daily lives. They want to satisfy their customers with quality products that perform well and offer them great customer service. I can only really test the first two of those ideals, as I really hope I don't run into any issues that require support.

Today Kingwin delivers the XT-1264 Xtreme CPU cooler from their H.T.C or Heat-pipe Touch Chip technology. This is not unlike their previous H.D.T. coolers, just a different naming scheme this time around. Either way you want to refer to it, let's take this cooler with exposed heat-pipes and get some images, then on to the testing. 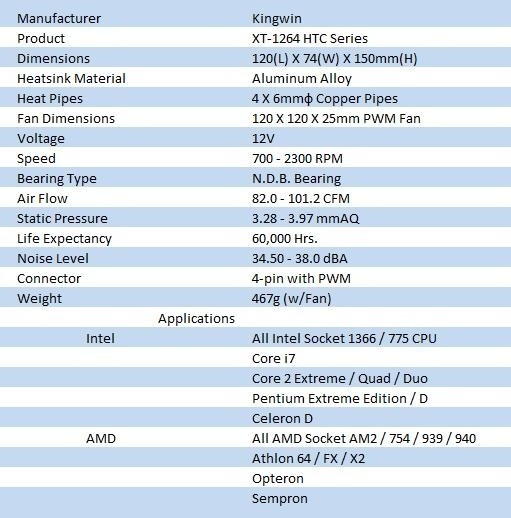 The XT-1264 H.T.C. cooler is comparatively lightweight, coming in on the scale at 467g. Don't let its weight fool you, the XT-1264 packs quite a few tricks up its sleeve to get the job done. Let's start with the name H.T.C.; this simply means that the four 6mm heat-pipes are in direct contact with the chip, or processor. These pipes are surrounded by an aluminum base that incorporates a pre-cooler on the top. Aluminum fins start at the bottom, surrounding the pre-cooler and continuing all the way to the top. There are no exposed heat-pipes protruding from the top. Kingwin has covered this with a stamped riveted on top fin to clean up the look.

Cooling all the specially designed fins is the job of the included 120mm fan. There are no LED's or any special blade designs, just a straight forward black fan designed to do one thing, cool. This is no average slouch of a fan, mind you. This fan is capable of up to 2300 RPM and just over 101 CFM. This fan should be able to get the job done in my mind, but let's wait for the results to tell us what the XT-1264 is capable of as a system.

Universal mounting for both AMD and Intel i7 and LGA775 is a nice addition, making the XT-1264 a nice offering to both sides of the fence. IF you plan to buy one, this should be no problem at all as many e-tailers show current stock of it. With an asking price of 36.99 U.S. Dollars at Newegg, the XT-1264 is very competitively priced, as a lot of coolers are in the $30 to $40 range. Time now for me to get some images to explain all the tricks and strap this to the T.E.C.C and see what Kingwin coolers are all about! 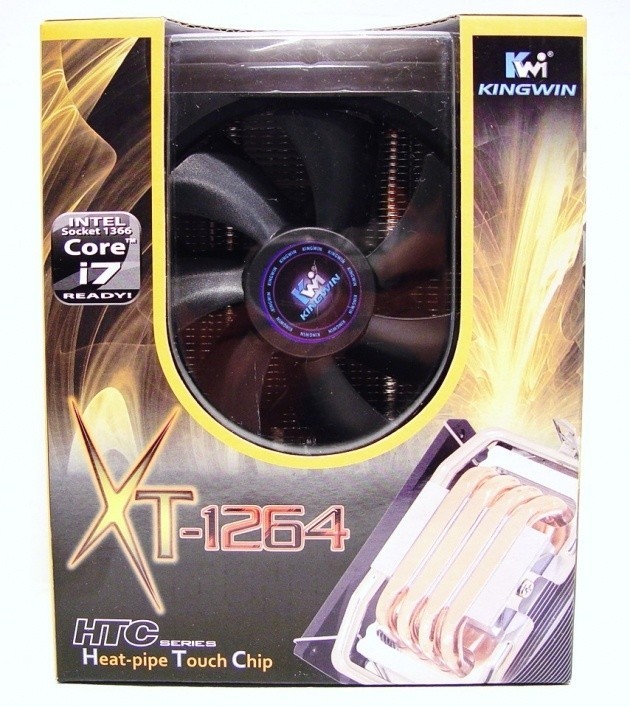 Kingwin displays the XT-1264 Heat-pipe Touch Chip cooler in a very flashy yellow and black package. The cut-out in the middle of the top allows for a pretty good peak of what you are buying, if you are lucky enough to shop from a shelf versus a PC. 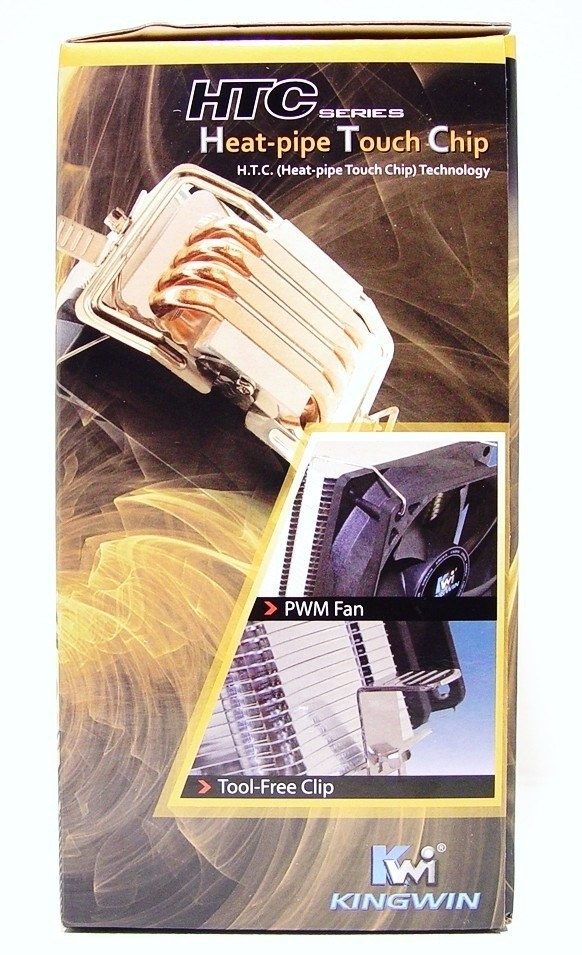 Kingwin places some close up product images on this side. Again, they show the H.T.C. base, but also a look at the PWM fan included as well as a look at the AMD tool-less mounting. 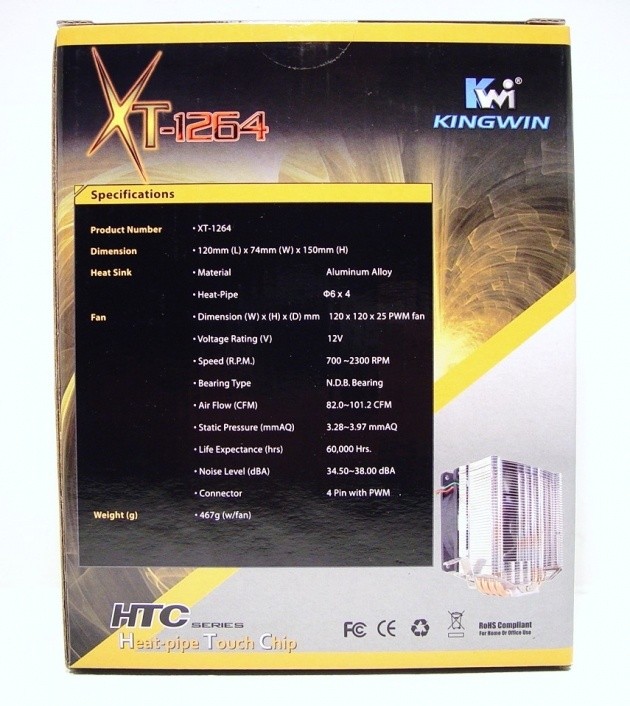 The rear of the XT-1264 is where the specifications are placed. The bottom right corner gives the first glimpse of the entire cooler. 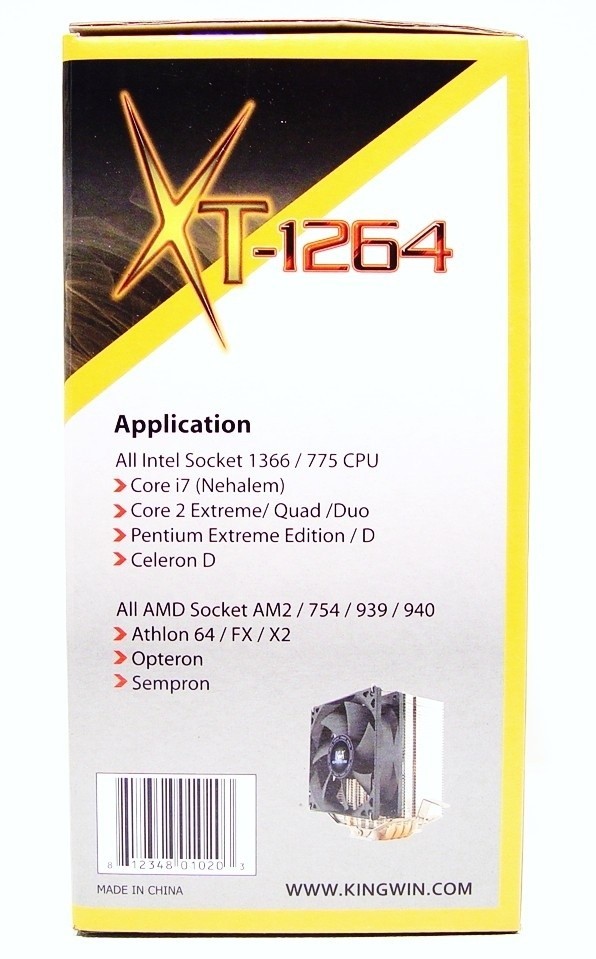 The last look at the outer packaging is where the compatibility list for the XT-1264 is located. 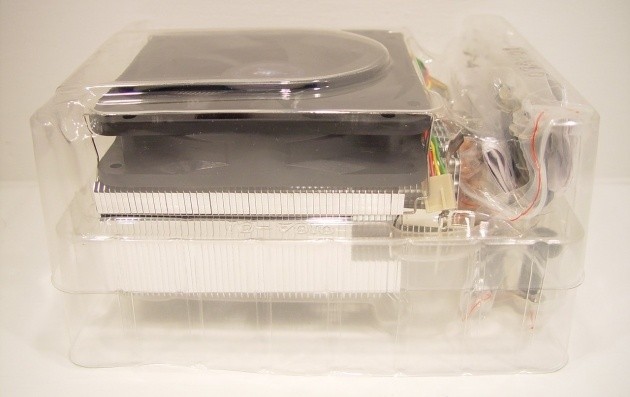 Sliding the cooler out of the box, I found it was housed in this. The plastic tray underneath supports the cooler during shipping and provides room to house the extra mounting hardware and instructions. The tray half is then covered with another layer of plastic, this time a little less supportive and more of a protective layer. 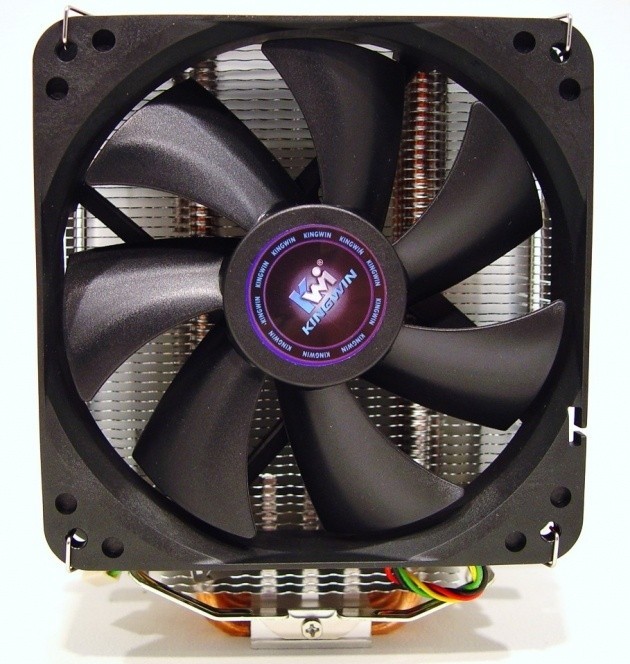 The fan Kingwin chose to accompany the XT-1264 with fits well and covers the fin area nicely. With its 101 CFM possibility, it should handle the job with relative ease. 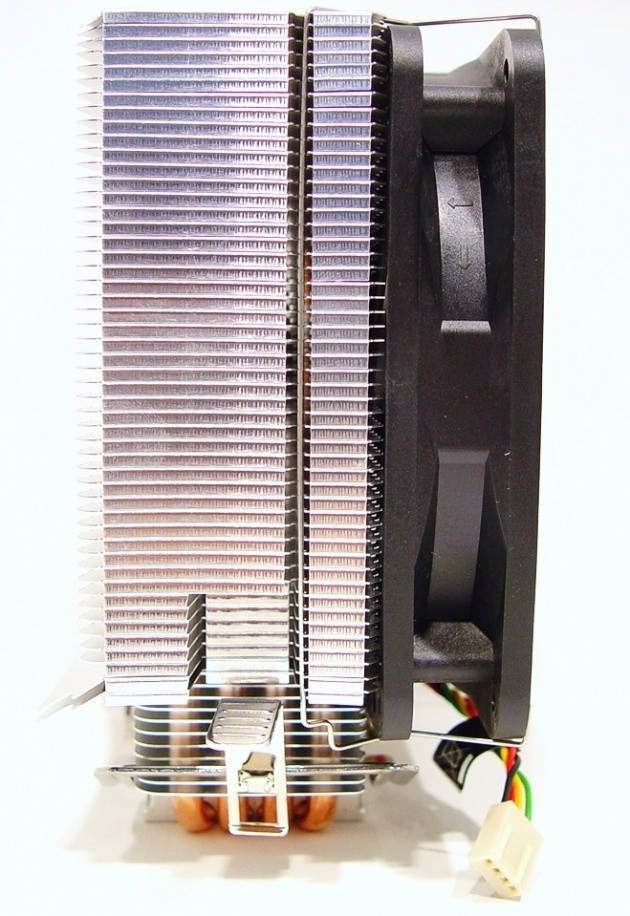 Getting a glimpse at the profile, Kingwin offers only a single groove for fan mounting. However, they did close off the edges of the fins to keep that 101 CFM inside the cooler by redirecting the air that typically gets deflected outwards by the heat-pipes. 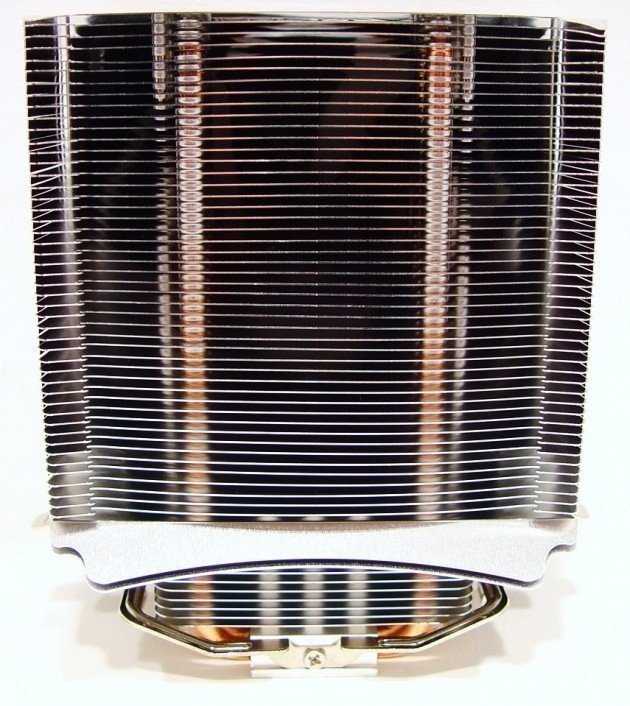 Spinning the XT-1264 to the rear, you can see at the top it took a bit of damage during shipping. This is nothing major to fix, a quick few minutes with a set of needle nosed pliers and they were back in line with the rest. Moving to the bottom, Kingwin has used two longer fins. These are angled to direct air toward vital motherboard components. 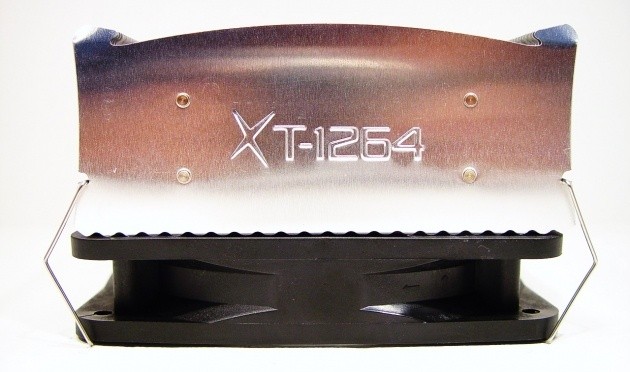 Looking down at the top, the Kingwin cooler uses a rippled fin edge on the fan side and a contoured shape with little tips on the ends. Here we have the only bit of flash as well. Kingwin stamped the fin with the XT-1264 name. 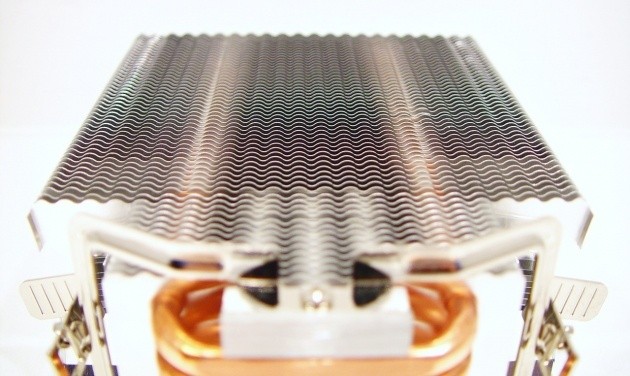 After removing the wire fan clips, you can get a better idea of how they shaped all the leading edges. This has a twofold benefit. One being that it has added spacing from the fan, while the second is that it also creates a bit of turbulence in the flow to aid in cooling performance. 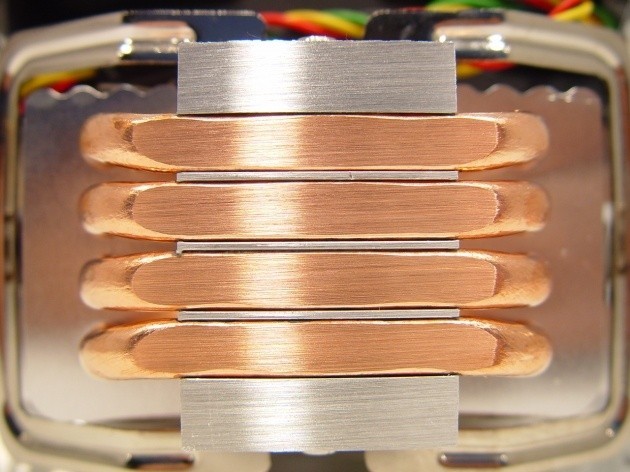 The business end of the XT-1264 shows the H.T.C. 6mm diameter heat-pipes. There are very defined gaps between the pipes, but all four pipes are level in their milling. I will be filling those grooves by rubbing TIM into them, then using our typical method of testing. 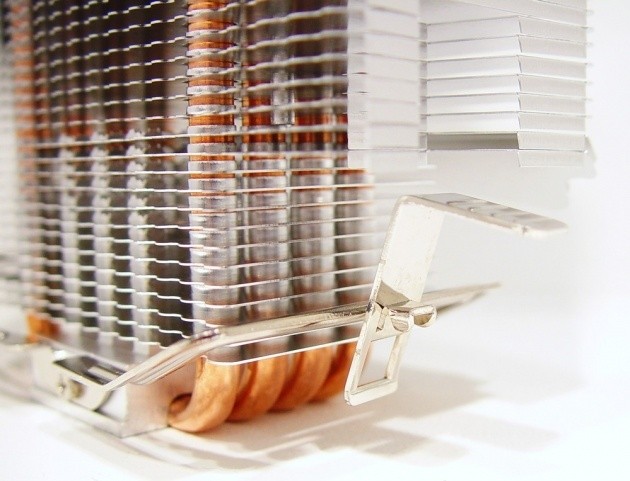 Getting a little closer to the heart of things, there are pressed on fins that are started at the very bottom of the heat-pipes. The cooler comes shipped out of the box, ready to install on an AMD socket with the tool-less clip. Kingwin even provides a notch in the side of the fins for easier access to the mounting. 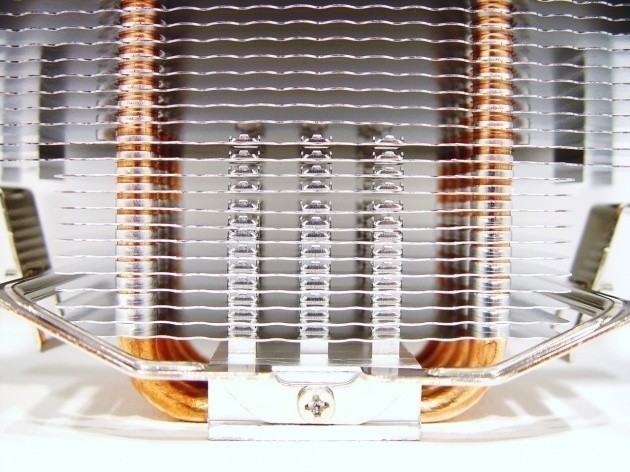 The reason the fins start so low is they surround a bit of a pre-cooler. The aluminum top plate of the base has three rows of towers that the fins slide over. On the side of the base is a Phillip's head screw, this and another on the opposite side allow for mounting hardware changes. 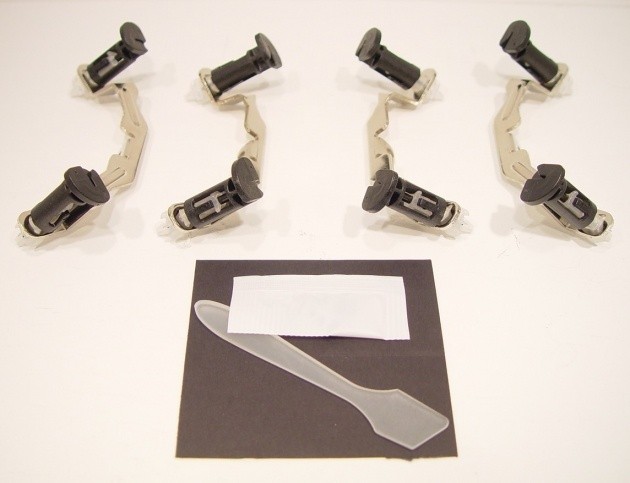 As I mentioned, removing two screws from the base allows the removal of the AMD latch. Included with the XT-1264 are the LGA775 and LAG1366 push-pin mounts. These are really simple to install and swap out when needed. At the bottom, backed in black is the included plastic spreader and packet of nameless compound. 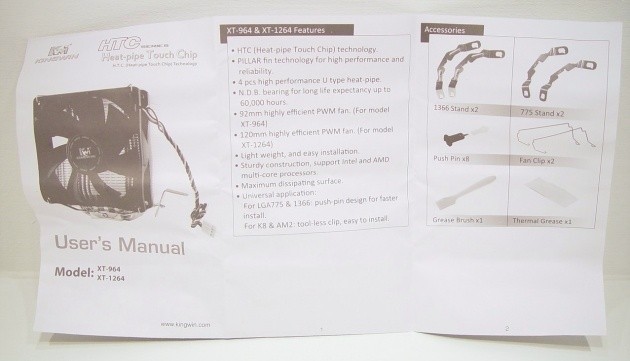 The instructional foldout isn't really needed to get you under way. A bit of mechanical aptitude and a screwdriver are all you really need. This foldout opens up to three times the size shown and does offer great images with well written step by step instructions. 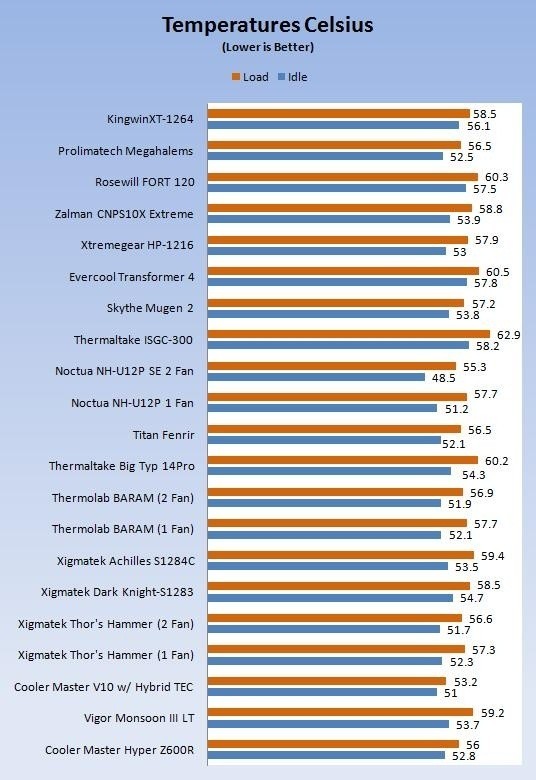 Temperatures of the XT-1264 aren't all that bad. Then again, it is nothing chart topping either. For its price, though, being very close to that of a Xigmatek 1283, it offers very similar performance, just with a much more powerful fan. 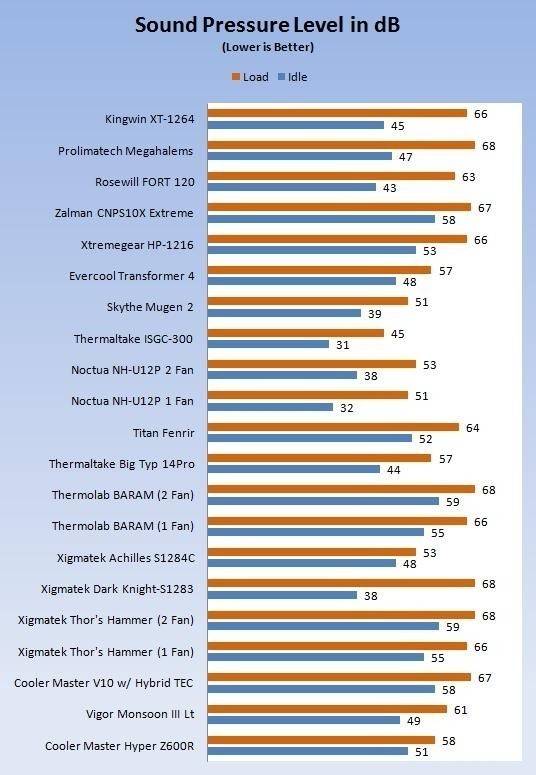 The fan equipped with the XT-1264 is of course 101 CFM at maximum RPM. This does exceed most other fans equipped with other coolers, but as you can see by the charts, it is toward the top in noise levels as well.

So, where does all this leave us? To me, I need to address a few things first to explain my angle on this. First, while it isn't always needed, this cooler has no flash. There isn't one thing that makes this cooler stand out in my mind. Second, while I know most things have been tried, some with greater success than others, with all the components of this cooler all packed in I would have expected a bit better performance. Lastly, I feel that a cooler that is shipped with a 101 CFM fan should be able to overtake most of its direct competition, but this time it just isn't the case.

Other than the obvious numbers comparison, there is one other issue I found with my specific sample. There is no sort of anti-vibration measures taken to prevent the fan from rattling the pressed on fins. During idle testing I heard a faint "shing" metallic noise, but at that time I just passed it off as the fan breaking in or something. When I sped the fan up for load testing I finally figured out what the noise was, as it got louder this time. I'd come to find out it was the folded over edges vibrating against the fin below it making the noise and not the fan at all.

Don't get me all wrong here; the XT-1264 is a good cooler, no matter what it looks like to me. Aside from the small vibration issue, I do find the cooler acceptable. It comes down to this. For $36.99 at Newegg plus shipping, Kingwin's XT-1264 is placed right alongside coolers that have similar results. I can't personally say it's my "cup of tea", but I am spoiled and see quite a few coolers.