The SteelSeries headquarters are located in Europe (Copenhagen, Denmark) and host the primary office facilities for the company.

The company's staff is distributed throughout the world, working from offices in Europe, North America and Asia.

With that said, we're expecting a high quality pair of gaming headphones here and look forward to seeing how they fare as a top notch choice for serious gamers.

Right then, let's take a close look at the contents of the package and then see what's included.

The sample I received came with quite an engaging package design, featuring a well laid out box made of a nice quality cardboard, the top of which is adorned with several of the reviews the product has received praising its performance.

Inside the Siberia Red package is of course the headphones themselves along with an in-line volume control and microphone.

The high-quality cable the volume control connects to also acts as an extension for the headphones, at the end of which there are two stereo mini-jacks to allow for the simultaneous connection of both the headphones and the detachable microphone.

Next in the package includes a product manual, a small catalog of other SteelSeries products and a sticker for your case if you're so inclined.

On closer examination we can see that the Siberia Red has been provided with a frequency response figure of 18Hz-28,000Hz which is very good indeed, meaning in short that these headphones should pack some acoustic punch.

Sound pressure levels generated are given at a healthy 99-104db at 1 KHz which will be ample for generating more than enough gain to satisfy most users I would say.

Now, with the microphone side of things frequency response is given at 80Hz-15,000Hz which is plenty for a microphone intended for the uses that this one is.

From a technical standpoint there is not a great deal more to discuss here and from the looks of the figures given and the overall design and feel of the product, things look good so far.

Once the headphones themselves are taken out of the box and connected to their extension cable, there really is not a whole lot left to do.

All that's remaining is to match your sound card or other audio source you're using to the stereo mini-jack connection provided with the headphones.

Secondly, if applicable, connect the other remaining cable to your microphone connection on your sound card.

Once this has been done the next step is to set the master volume for the headphones using their in-line volume control.

When you boot up into your sound card drivers, I would also recommend setting them to 'headphone' in most cases, as your sound card will be able to 'pre-set' itself to perform best when it's told the device to which the audio is being sent out to.

Now that the headphones have been connected successfully to your audio device and you have told your device that they're headphones rather than speakers, it's a case of finding some great material to start putting them through their paces.

After taking into account the impressive specifications of the headphones themselves and also the above average build and construction quality, I feel that my test results are going to fair quite well.

When evaluating the high-end performance of these headphones I felt instantly in-touch with the music I was hearing; that is to say I felt an instant emotional involvement in what I was hearing. The high-end felt smooth, unobtrusive, yet full and present in the mix, adding just the correct amount of presence without being bright or tinny.

In short, the high-end sounded beautiful. It did not cause fatigue after a solid amount of testing at full power, which is a testament to a well designed product, period.


Middle of the road

Drums and other percussion instruments sounded fantastic in the mix and these headphones give a real timbre to the sound that simply surprises the heck out of me, because it says it's for gamers on the box.

Now, maybe gamers in Germany have higher standards than in other places, but either way these could easily be sold as general purpose headphones.

The bass frequencies manage to maintain their integrity without sounding over exaggerated or boomy. The low-end of the Siberias is somewhere between the roaring bass of the 5.1 Sharkoon X-Tatics and your average pair of headphones.

While it's always present in the mix and never takes over from the other frequencies, it's also a little on the thin side and does not seem to really achieve excessive amounts of depth, nor volume.

However, depending on the user this could be either good or bad, but I think what's really worth mentioning is how well low, mid and high all fit together in the Siberia package. I really cannot stress how balanced the mix felt during testing. I never found myself racing to the EQ to make adjustments in order to find an equilibrium; they just sounded good out of the box.

When discussing comfort, I found these to be without exception the most comfortable pair of headphones I've used in recent times. I do not need to repeat myself here; they simply feel like you're not wearing headphones.

This is in part due to the head band which conforms to the size of the users head and also due to how incredibly light they are compared with some others out there.

During my testing I was happy to conclude that these are not only well built and comfortable, but they sound silky smooth, too.

The included microphone is, as I always say about these little mics, adequate for the job at hand.

Taking into account what has been said already about this product and that it is not a surround system as such, what I'm going to add here will be limited.

During testing I found these headphones held up incredibly well, no-matter what was being played through them.

To keep it simple, I'll just add a word of warning continuing on from my comments about the low-end (bass). These are not the 'deepest or lowest' headphones I've heard or tested, but in my opinion this works to their merit.

However, if you're mad about your low-end and music listening is not a big deal, there are other products out there that will be able to satisfy 'bass junkies'.

The SteelSeries Siberia Red is a fantastic product that is built out of strong rugged materials along with a very competent design. And best of all, these headphones simply sound fantastic out of the box.

And did I mention they are virtually weightless on your head after using them for a long gaming session or music, games and movies? - This is an issue with many other gaming headphones, but not with these.

However, nothing is perfect and the low-end of the Siberias is simply not going to suit everyone, but that's life. Personally I think the 'slimish' low-end suits the overall tone of the product. But some won't; inevitably.

Overall, I'm very impressed with the Siberias and feel that SteelSeries' asking price of around 60 U.S. Dollars for this headset is well warranted indeed; yet another big plus which makes them worthy of the Editors Choice Award. 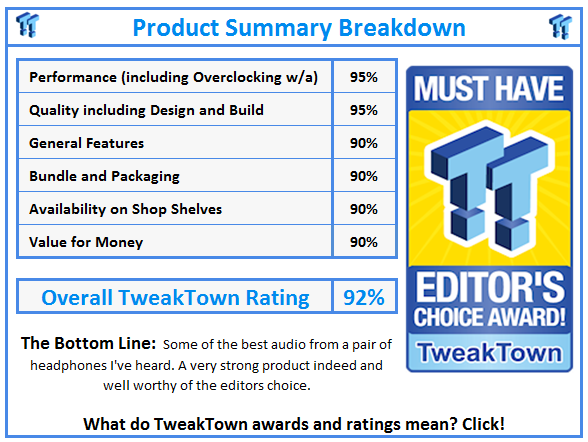