The Q11 has potential to be a fantastic cost effective Wi-Fi 6 solution but was mired by hardware issues that we only hope have been fixed with the latest firmware update.

Motorola is easily one of the most recognizable vendors in the world, operating in several market segments, one of them being home networking. Their product portfolio includes broadband cable modem solutions, network routers, and mesh WiFi6 and 6e solutions. One of these new platforms is the Q11, and luckily, we could snag a sample to give it a drive through our testing and use in my home network.

The Motorola Q11 is an AX3000 class solution. It offers 574Mbps on the 2.4GHz band and 2.4Gbps on the 5GHz band. It supports 1024QAM, Beamforming, and OFDMA technology with a peak transmit power of 30dBm. This solution offers a single WAN and LAN, both 1Gbe connections on the wired end.

The Motorola Q11 is available in a single-node pack and a three-pack. The former carries an MSRP of $189, while the latter comes at $449.99. Both have a one-year warranty. 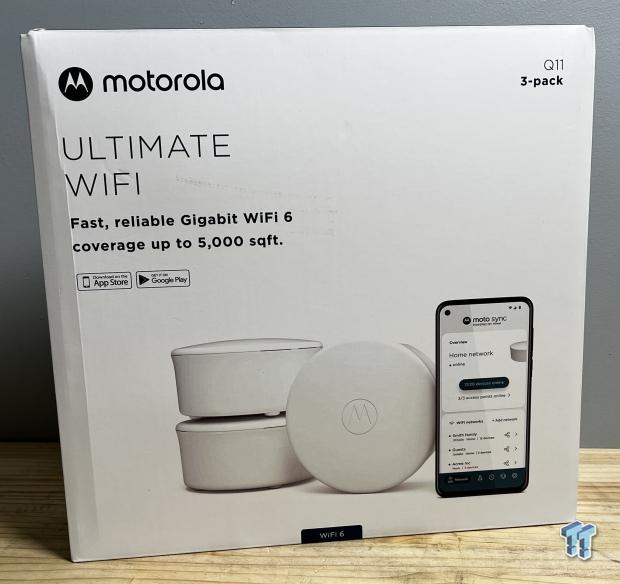 The Q11 arrived in its retail packaging. Scope of delivery includes the model top right and an image of the kit in the middle. 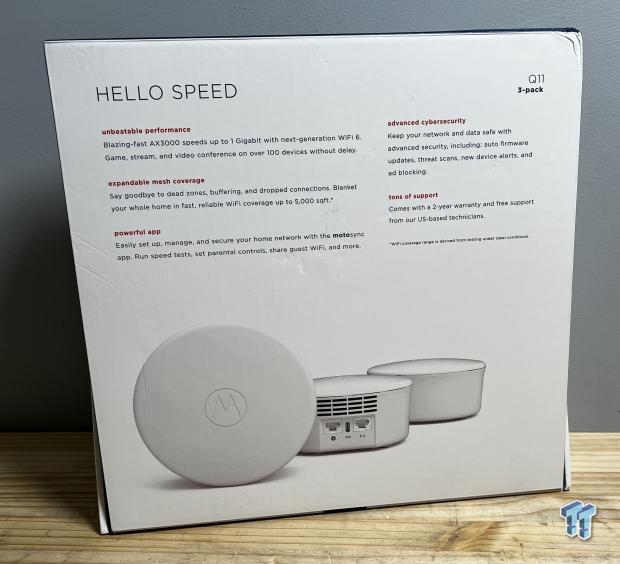 On the back, you will find the features of the platform listed. 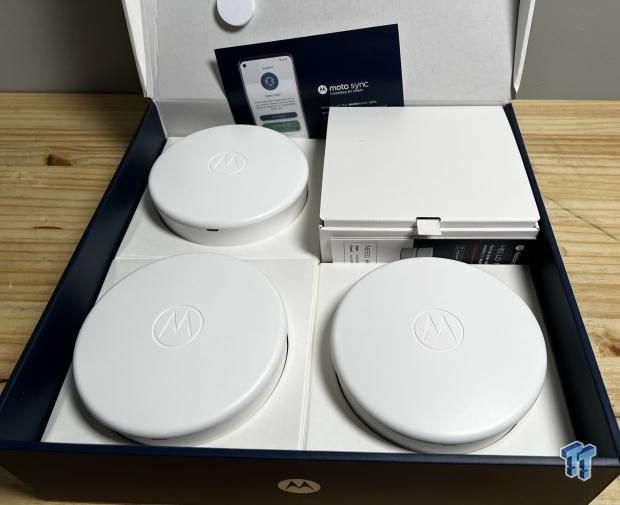 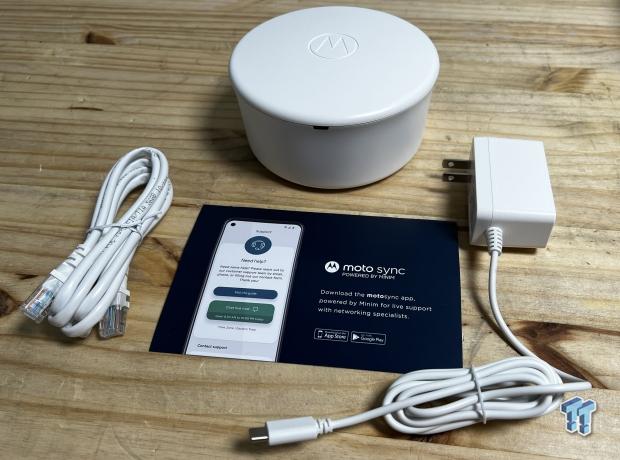 Each node includes a USB-C power adapter. The included card notes the need for the motosync app. 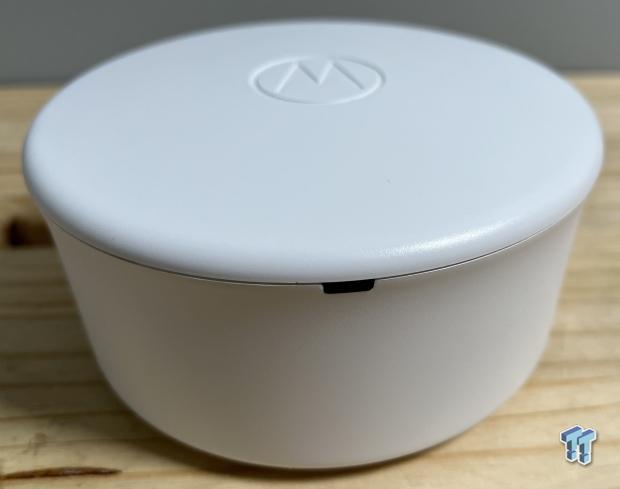 In our closeup of the node, each unit has a front LED with branding molded into the chassis. 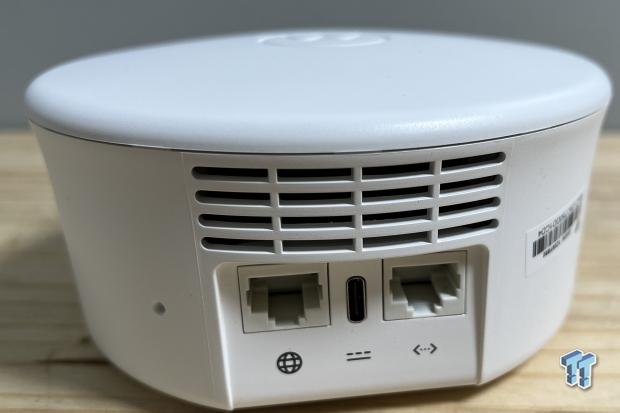 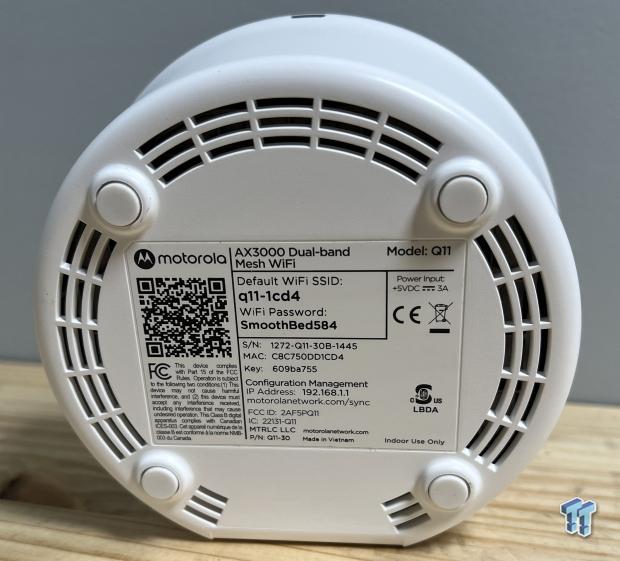 The bottom of the unit holds regulatory information and the default SSID and password.

The app above, Motosync, is needed to set up and manage the Q11.

With setup complete, we have the dashboard as seen above, including a connected device list.

Moving into the menus, we have the security center, home filter, and connection.

The connection menu allows you to manage your ISP speed and performance, giving you an idea of what your network can handle at the top.

The support menu in-app live chat allows you to quickly figure out any issue you are having with the Q11.

The Motosync app does offer more basic controls of the network. These include the ability to set up filters and users and add additional nodes to the mesh network.

Advanced settings include port forwarding options, ISP options, and Wi-Fi optimization. You can also reset device history in this menu and delete the network if needed. 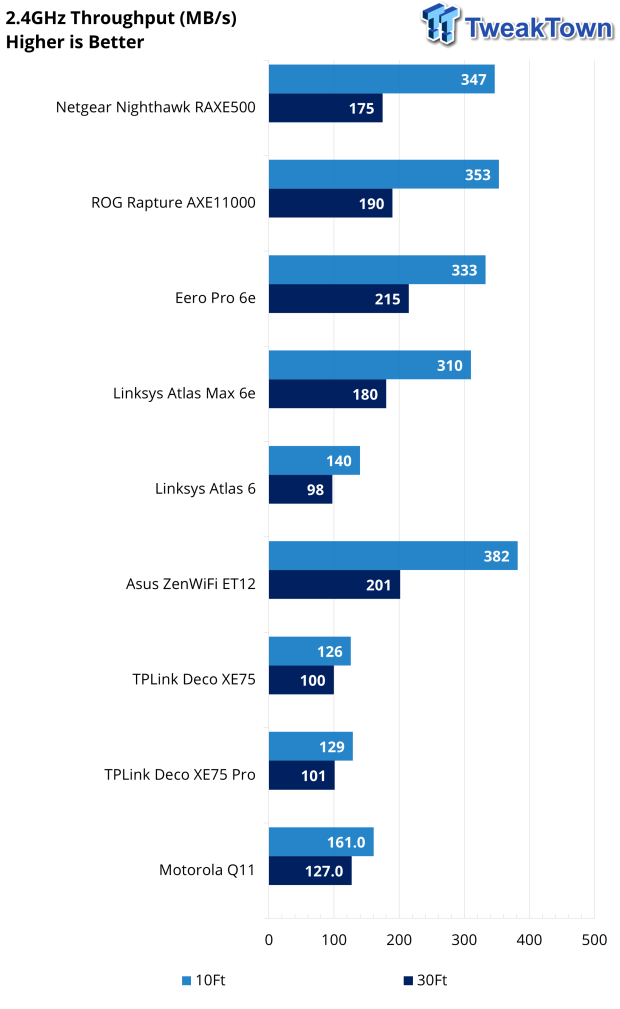 Testing used our Lenovo X1, and I found 2.4GHz performance to be on par with an entry-level platform. Numbers landed at 161Mbps at 10ft, and if I moved out to 30ft, a small drop to 127MBps. 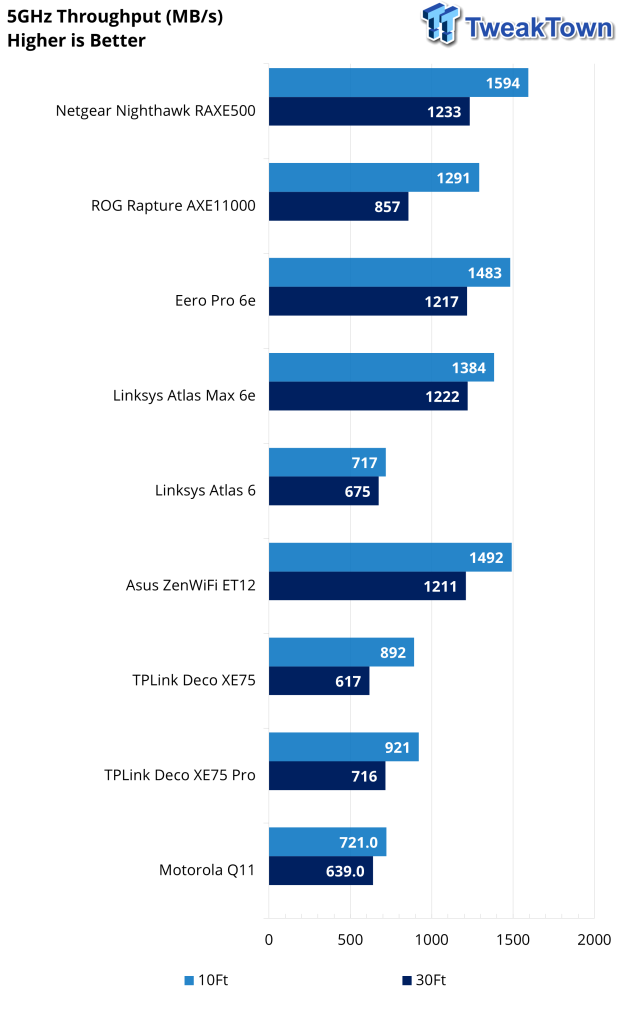 5GHz was, of course, a bit quicker. I saw a rather decent 721Mbps at 10ft. At 30ft, this dropped to 639Mbps, still quite respectable for entry-level.

Right off the top, I did have issues with the Q11 after testing using it in my home network - this is like the second testing phase for routers here at TweakTown. I use every platform in my network for a minimum of a couple of weeks.

That said, the Q11 tested well. The numbers can be seen above, but I noted laggy moments with the Q11 towards the end of the first week in daily use. I didn't have to reboot the unit as the issues would resolve independently after a few minutes. Later in the test period, the Q11 would drop the network completely; this required a unit reboot. During the last few days of home network testing, things did appear to clean up after a firmware update was pushed through. I'm hopeful Motorola has these issues sorted.

As for the rest, performance in testing was good, entry-level, but fine for homes with less than 100 devices wanting to connect. At peak, our 2.4GHz performance landed at 161Mbps, and 5GHz came in at 721Mbps. The app works well but does require account creation, a negative for those concerned with data privacy.

Functionally, the Q11 has the most basic set of options for a home network, including port forwarding capability and UPnP to handle some of that automatically. It offers decent security built into the router, none of which you have to pay extra for, and live chat right in the app for any issues you may have.

Overall, a solid platform (after the firmware update) but certainly not perfect - good for consumers with a small number of devices to connect. 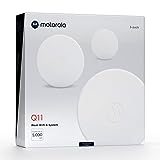 The Q11 has potential to be a fantastic cost effective Wi-Fi 6 solution but was mired by hardware issues that we only hope have been fixed with the latest firmware update.