To bring their product portfolio up to date, eero recently launched several platforms to market, the first being eero 6+, a new entry-level solution, small form factor dual band aimed at getting the cost of entry into the Amazon ecosystem lower, and the eero Pro 6E, a new flagship taking over from the Pro 6. Since we just looked at the eero Pro 6 a touch over a year ago, I found the 6E right up my alley for testing, so we asked to have a unit sent over for just this.

Like Pro 6, the new 6E platform shares the same aesthetic and design, possibly even the same chassis. For hardware, we have a 1GHz dual-core processor, 1GB of DRAM, and 4GB of flash storage, while the integrated radios offer 600Mbps for 2.4GHz and 2.4Gbps for the 5 and 6GHz bands. 2.5Gbe has also made an appearance on the Pro 6E alongside a second port at 1Gbps, both autosensing.

The eero Pro 6E is offered in three configurations; single, two-pack, and three packs. The top end goes for $699.99 while the single lifts off at $299.99. Warranty is listed at one-year for all models. 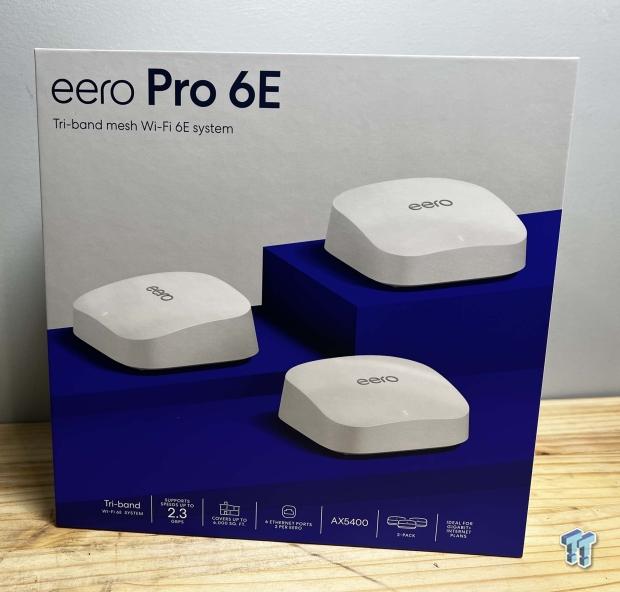 Packaging is quite like the Pro 6. We have an image of the nodes on the front of the box and branding along the top. 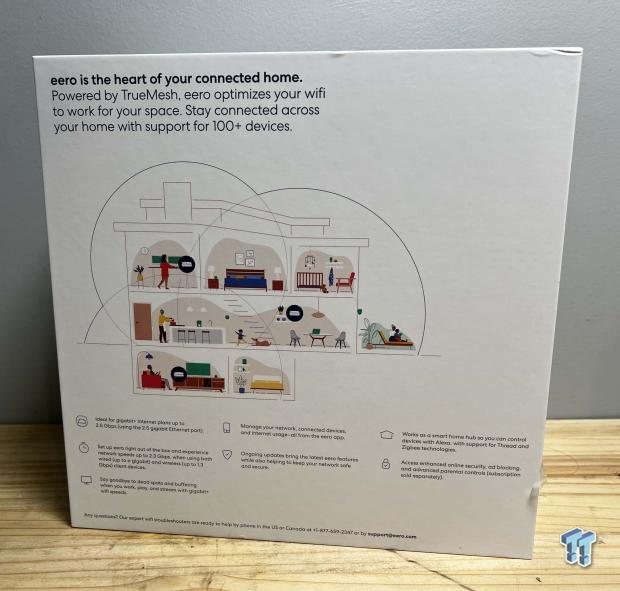 The back of the box goes into more detail on the features of the 6E platform. 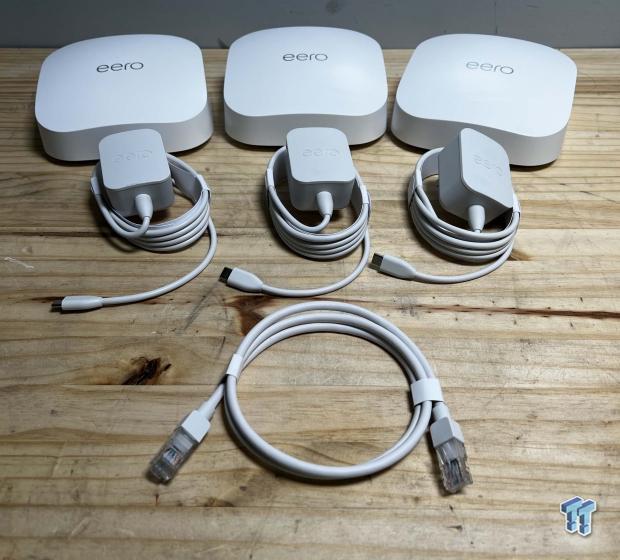 Included in the box, we found all three nodes and their power adapters. Also included was a white ethernet cable. 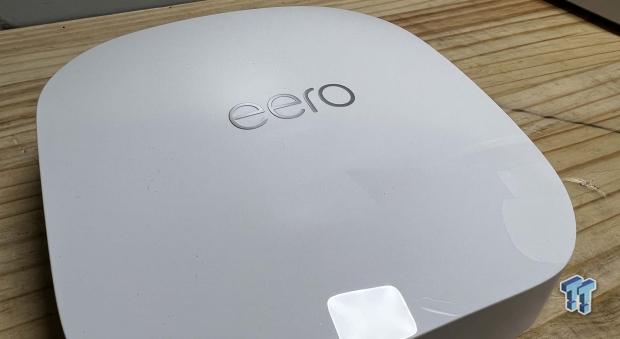 Up close, we have a glossy white finish with eero branding. 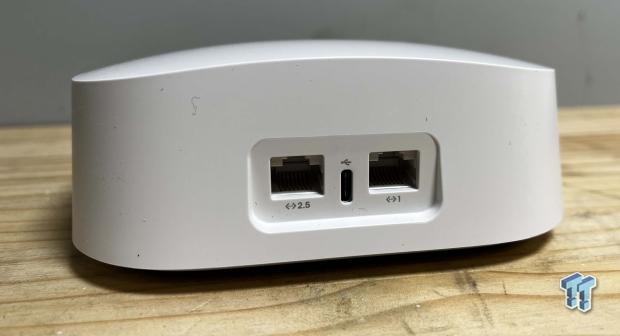 The I/O of each node offers a 2.5Gbe port and 1Gbe port; auto-sensing WAN/LAN. 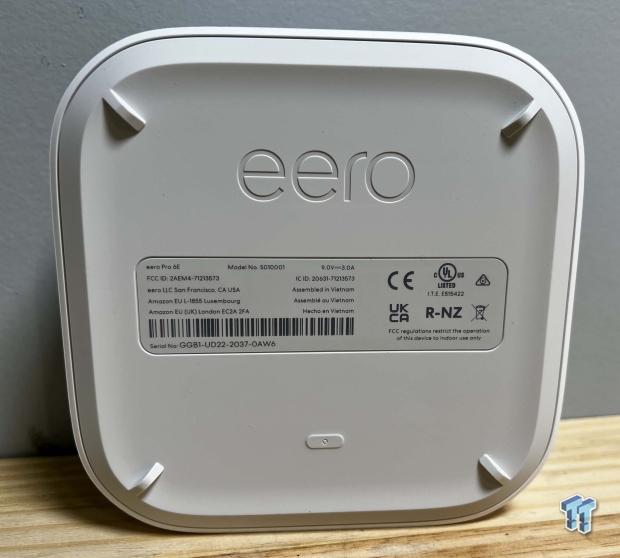 The bottom of each node offers model and regulatory information.

Like most mesh networking platforms, eero runs off an application, seen above, available on iOS and Android.

The app does offer guidance through setup, starting with the list above to get you started.

Traffic stats are on the app as well, broken down by week, including the fastest download and upload for the week with a total of downloaded and uploaded data.

A little deeper, we find settings for the nodes, including the current SSID and password, along with the guest network.

Looking at each node, you can see the devices connected to each node and its backhaul rate. You can choose to manage the status lights along with advanced menu items at the bottom.

Speed test tests your ISP connection, our current rate being 487/24. 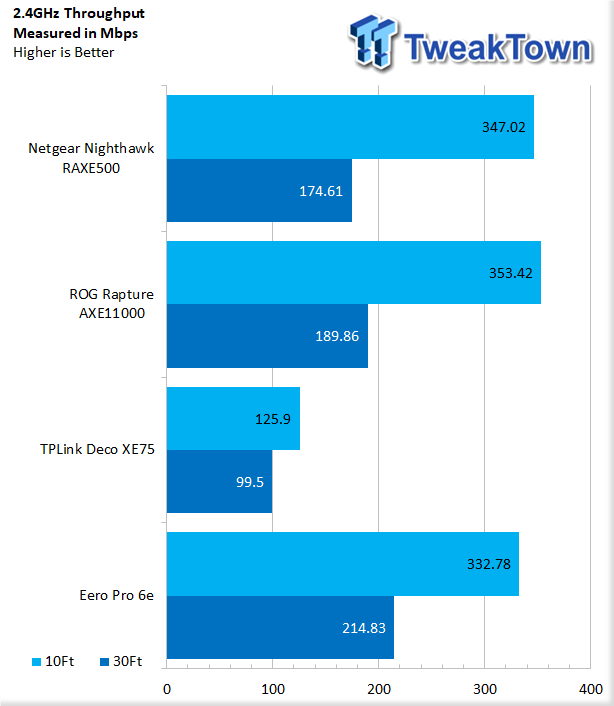 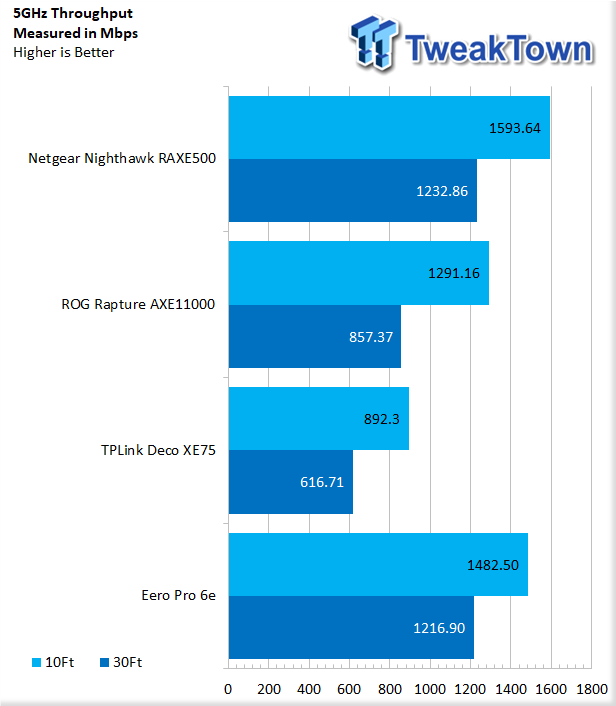 5GHz turned things up a bit, offering 1482Mbps at peak. 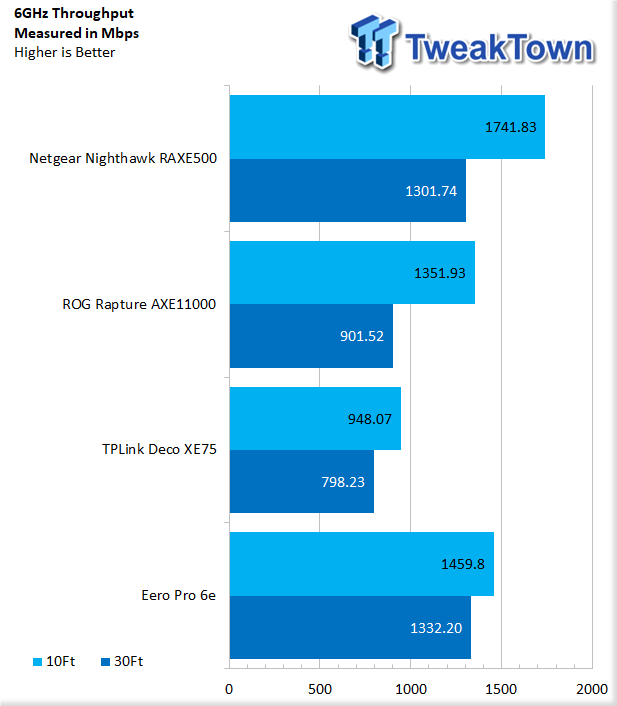 Pro 6E won't be a huge upgrade for current users of the eero Pro 6 platform from last year. Unless you have recently updated your notebook or have the latest-gen phone, you likely have no 6E client devices to push yourself to make the upgrade. That said, consumers that want the cutting edge or are moving from an older WiFi5 or Wave 1 WiFi6 platform should certainly put an eye on the Pro 6E.

For me, the downside of eero Pro 6E is the lack of high-end controls. Besides that, eero Pro 6E is one of the better mesh platforms I have tested. The ability to wire your backhaul to each node is a simple feature not always implemented, and eero does it without any intervention.

The app offers all the basics needed to set up a proper network, including SSID control, traffic analyzer, parental controls, and speed tests for consumers to confirm the setup. 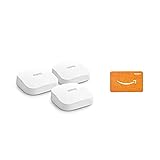 Consumers looking to make the move to a Mesh Wi-Fi 6e platform should certainly put an eye on the Pro 6E from eero as it is one of the better solutions on the market.