From the accounts of those who worked there, 1980s Disney was neither a particularly pleasant nor creatively uplifting place. Since the departure of their name's sake in 1966, the company had slowly slid into cultural irrelevance, with their animation output such as The Rescuers and The Black Cauldron failing to live up to the quality and success of previous hits, while live action films such as The Black Hole and Return to Oz also proved disappointing.

Low on cash, Disney sought equity from Silver Screen Partners, which allowed the studio to reinvest in quality filmmaking with titles that set up its future success, such as Oliver and Company, The Little Mermaid (and everything that's come since) and perhaps the riskiest venture - a technically challenging live action/ animation noir detective story called Who Framed Roger Rabbit.

In an alternate 1940's Los Angeles, Toontown is home to Hollywood's eclectic stable of animated characters, including Maroon Pictures' star Roger Rabbit (voiced by Charles Fleischer) and his wife, Jessica (voiced by Kathleen Turner). Concerned for the health of their marriage and Roger's ongoing viability, studio head R.K. Maroon (Alan Tilvern) hires down and out detective Eddie Valiant (Bob Hoskins) to investigate Jessica Rabbit's alleged adultery. Flung headfirst into a world he doesn't understand, and with more than a chip on his shoulder, Valiant is dragged into a scheme hatched by Toontown's villainous Judge Doom (Christopher Lloyd), which would see it wiped off the map.

Director Robert Zemeckis, fresh from the success of the original Back to the Future, turned his attention to what would prove to be an immensely difficult production which merged hand drawn cel animation with live action photography in ways that far exceeded previous attempts, broke through studio politics to include characters from the golden age of animation including those from Warner Bros. and Disney (in the same frame, no less) and crafted a massive hit for the studio that's as relevant and engaging 35 years on. 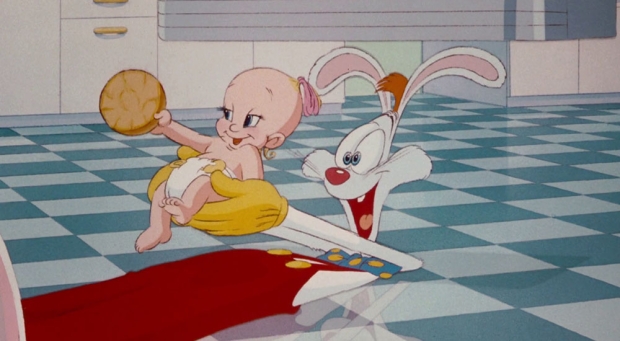 Who Framed Roger Rabbit is presented in its original aspect ratio of 1.85:1, encoded with H.265 compression, and finished with an HDR-10 pass.

Owing to the film's decidedly analog production methods, which featured layers and layers of cel animation on top of live action film negative, for the first 25 years of its existence, Who Framed Roger Rabbit always had a somewhat compromised appearance - that is, until film scanning and digital restoration tools allowed the film to film to shed the dirt and grime that was embedded in the negative since production.

For its 4K debut, Disney has assembled a new restoration that takes full advantage of improvements in negative scanning and restoration to present the film in unparalleled quality.

Trumping the still-impressive Blu-ray version from 2013, the new master takes the image to new heights by pushing this format's ability to better resolve color through WCG and HDR and overall improvements to image stability and grain retention. Live action scenes look particularly gorgeous, with excellent shadow detail and crisp highlights that deserve pausing from time to time.

While understandably, scenes with animation take a dip in perceived resolution, it's all kept surprisingly consistent, and nothing ever really stands out as problematic - only serving to highlight that this was made at a time long before digital compositing and CG tools made this type of thing a walk in the park.

By any measure, this is a superb presentation that will particularly please long-time fans. 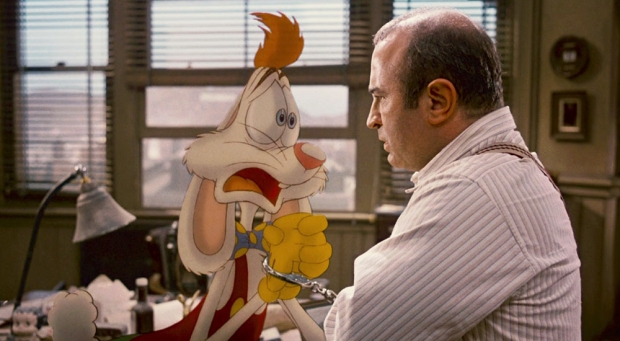 In a rare move for a non-Marvel Disney title, the studio has seen fit to give Who Framed Roger Rabbit a brand new Dolby Atmos upmix, which does marginally improve on the previous 5.1 DTS-HD mix from the Blu-ray, but perhaps they might have reserved their resources for a more aggressive title.

There's little to complain about here, with the track doing everything expected of it, even if it does little more. The audio sync is good, there are no pops or crackles, and Alan Silvestri's iconic score fills the gaps with bombast. As per Disney's modus operandi, subwoofer usage is a little lighter than perhaps ideal, although it adequately supports some more dramatic sequences.

Overall, a fine, perfectly capable track that won't tax your system to breaking point, but the 4K disc likely presents Who Framed Roger Rabbit in the best aural presentation heard yet. 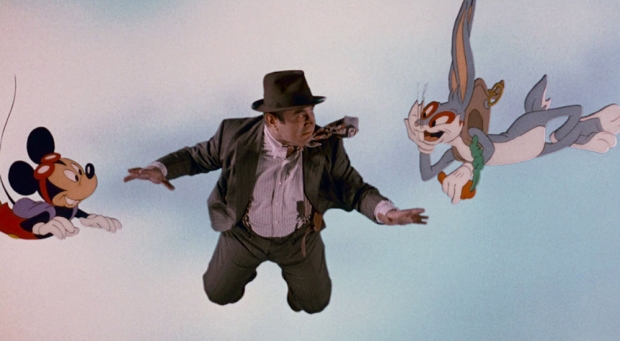 While the previous DVD and Blu-ray releases of Who Framed Roger Rabbit included a range of features such as a 36-minute long 'making of' documentary, three short films, and multiple featurettes, these haven't been provided here due to the absence of a pack-in Blu-ray.

Who Framed Roger Rabbit holds up today as a standalone detective noir adventure, and as a once-in-a-lifetime celebration of animation.