The last DRAMless SSD from Western Digital we reviewed, the 1TB WD Black SN770, turned out to be the most amazing SSD we've ever seen. This power-sipping, 4-channel DRAMless SSD changed everything we thought we knew about DRAMless SSDs. The PCIe Gen4 x4 interfaced SN770 defied all our preconceived notions about what the necessary ingredients for an Elite performing SSD had to be.

This drive clearly demonstrated that power-hungry, fire-breathing 8-channel controllers and expensive onboard DRAM are no longer required for hyper-class performance. In fact, the SN770 demonstrated that HMB (Host Memory Buffer) technology has become so efficient that we just might be witnessing the beginning of the end of onboard DRAM. After all, the SN770 is the overall most powerful consumer SSD WD has ever brought forth in terms of real-world performance. Just mind-blowing for a single package, 4-channel DRAMless SSD.

We should also point out that a huge part of the winning combination for the SN770 is the 512Gbit 112 Layer BiCS 5 flash it's arrayed with. BiCS 5 is true 4-plane flash and, as we've pointed out previously and provided it's managed by a controller running firmware that plays nice with it, is by far the best-performing flash currently adorning consumer SSDs.

We think so highly of the 1TB WD Black SN770 that we could not stand to wait for Western Digital to send over a 2TB review unit, so we bought our own. We need more of that DRAMless goodness. Now, we just assumed the 2TB model would be arrayed with two 1TB flash packages, and if so, despite WD's quoted performance specs, it might be even faster than the 1TB model. It turns out that's not the case. The 2TB model, like all others in WD's DRAMless stable, is arrayed with a single flash package.

2TB in a single flash package is something we've not seen before and is pretty amazing in its own right. But what that means is the 2TB model, just as it's spec'd by WD, will not be as fast as the 1TB model due to its 1024Gbit die composition. So, will it still be an Elite performer? That's what we want to know. Join us as we find out. 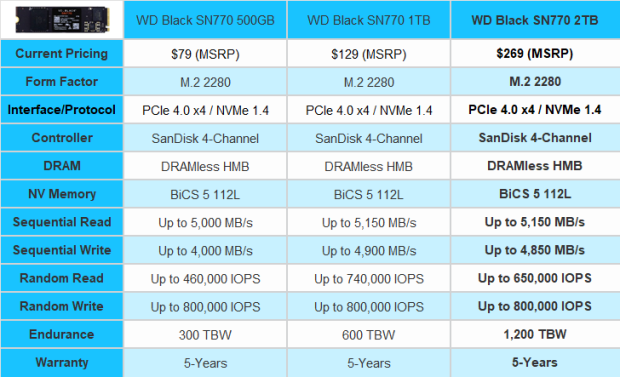 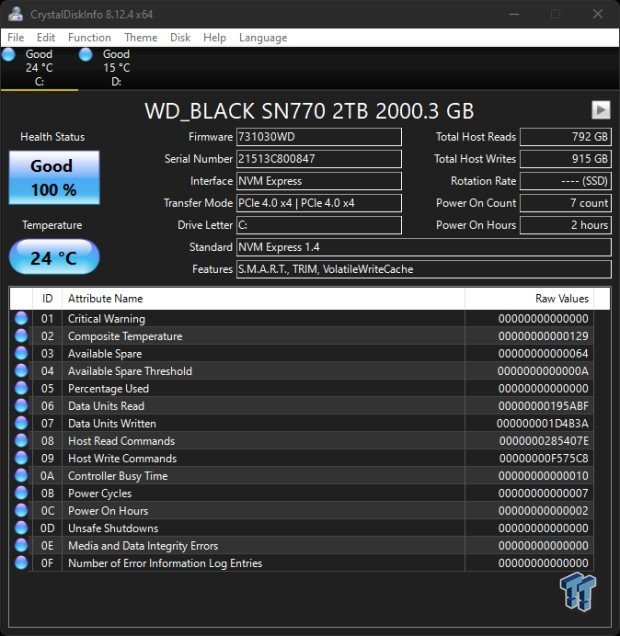 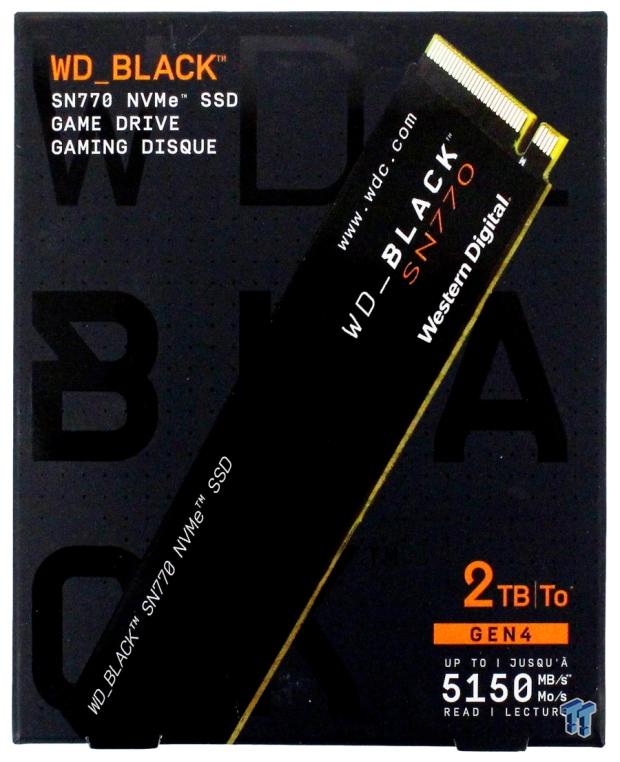 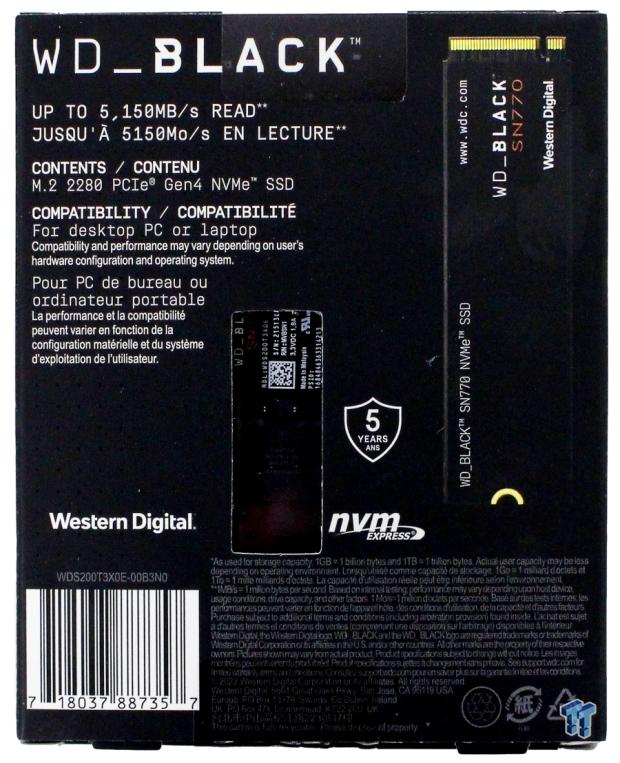 We anticipated the 2TB model would need two flash packages to reach its capacity, but nope. The 2TB WD Black SN770 follows right along with what we've seen physically with Western Digital's DRAMless offerings for some time now. A single-sided 2280 PCB with a tiny SanDisk 4-channel controller upfront, some sort of coprocessor to the right of the controller, and a single flash package at the rear of the PCB. 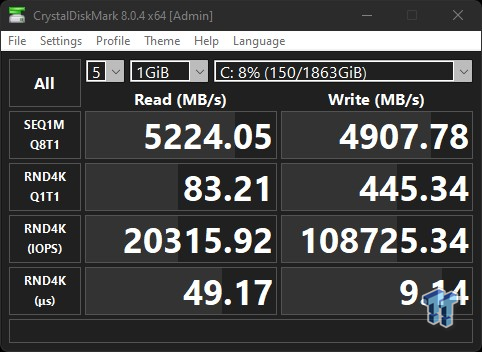 Testing with CDM reveals Western Digital's sequential throughput specs for the 2TB model to be pretty much spot on, if not a bit on the conservative side. In terms of sequential throughput, not much has changed by going to 1024Gbit flash. Random read performance, however, is down considerably compared with the 1TB model, which will have an impact on consumer workloads and gaming. This is what we expect to see whenever die capacity increases, so no surprises here. 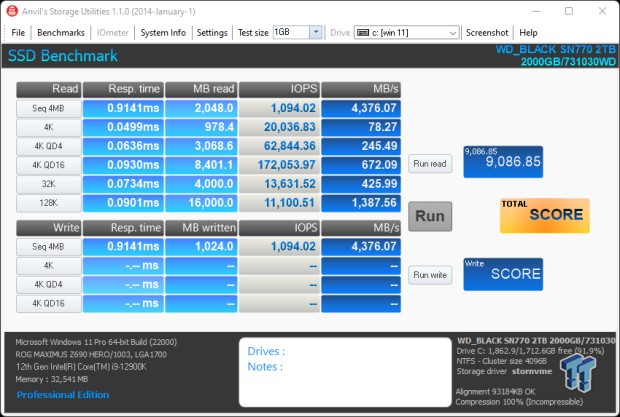 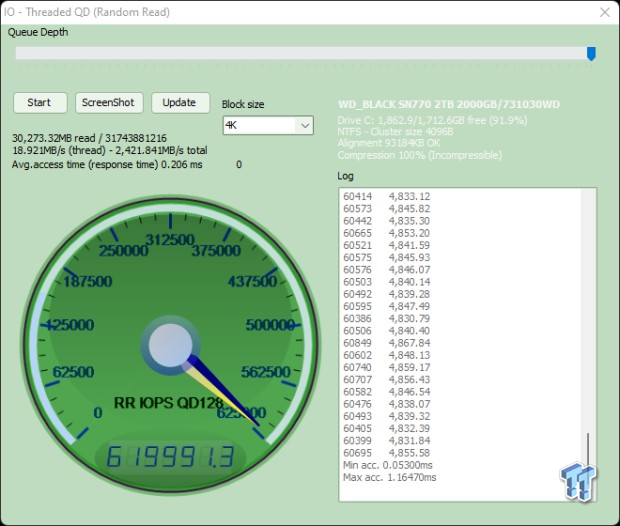 Scoring here is down around 900 points compared with its 1TB sibling. Nevertheless, 9,000 points still lands our 2TB test subject in pretty good company, especially considering this is a DRAMless SSD.

Moving over to IOPS at QD128, we find the 2TB SN770 delivering a maximum IOPS of 620K, roughly 100K less than its 1TB sibling but still quite extraordinary for a DRAMless SSD. 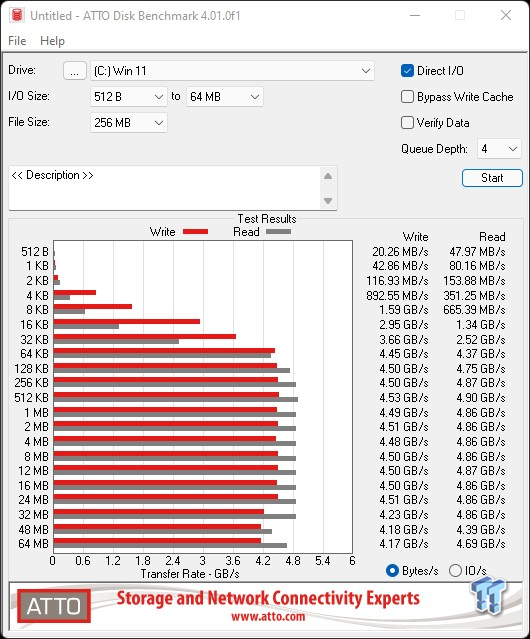 As we've seen so far, higher capacity dies have little to no impact on sequential throughput. In fact, our 2TB test subject managed to best its 1TB sibling in 128K read throughput. Very nice. 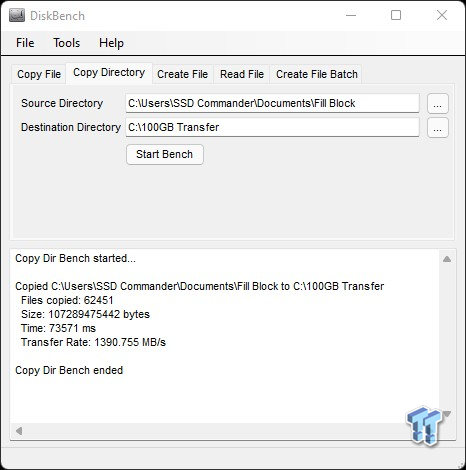 The 2TB model continues to pretty much match its smaller sibling. Both are beating a bunch of 7,000 MB/s capable 8-channel SSDs. Impressive. 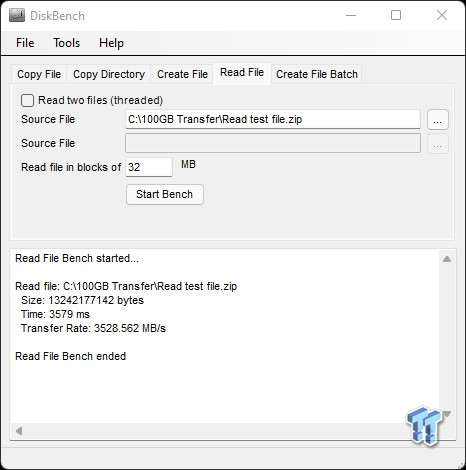 It is quite impressive that the 2TB SN770 is the fastest of the Gen4 5,000 MB/s class SSDs, even outpacing several 8-channel drives with onboard DRAM and its smaller sibling to boot. 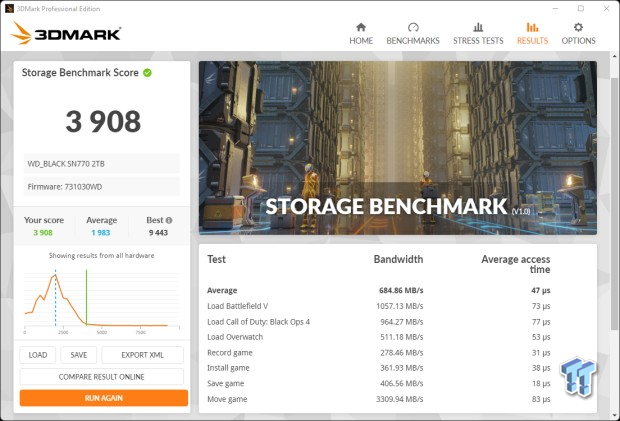 Gaming is a performance metric that matters to the majority of DIY consumers, especially to the enthusiast crowd that TweakTown caters to. We knew 1024Gbit flash would lower performance here. The question was, by how much? Roughly 10%, but even so, the 2TB SN770, despite its inherent handicaps, can outperform SSD the likes of Samsung's 2TB 980 Pro. Wow. 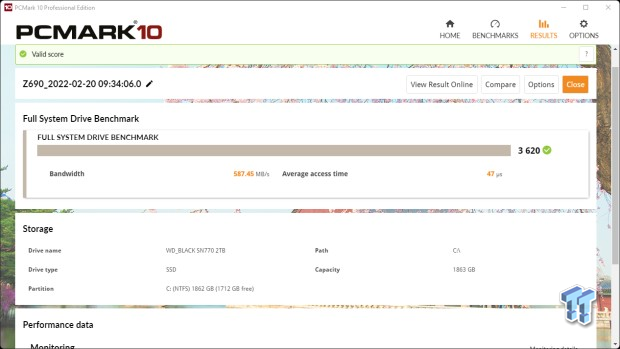 Roughly 9% less performance than its 1TB sibling. However, this performance hit is minimal in reality as the 2TB SN770, although slower than the 1TB model, is still among the fastest SSDs ever made. It's faster at heavy consumer workloads than most 7,400 MB/s Hyperclass SSDs, and that's with only one flash package and no onboard DRAM. Considering the 2TB model is made with 1024Gbit die, we find this to be an even more incredible accomplishment than we saw with the 512Gbit based 1TB model. 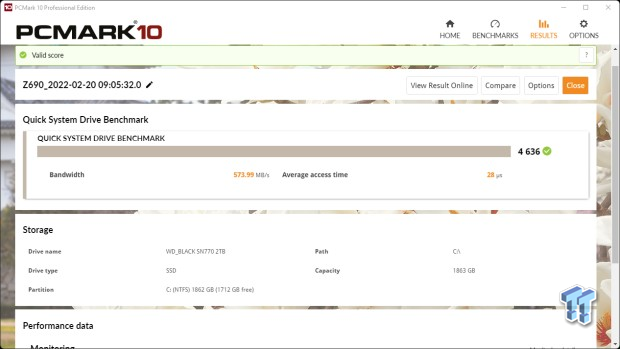 Once again, a roughly 10% reduction in performance from 1TB to 2TB. But who cares? Look at where it lands on our chart. This is performance that matters.

Low power PCIe Gen4 x4 DRAMless SSDs are looking incredibly attractive at this point. By far, the best of this new class of value-centric hyper-performing SSDs is Western Digital's SN770. Overall, we deem it the most accomplished flash-based storage device ever made. Period, end of story. At 1TB, the WD Black SN770 is indeed the best performing SSD available in the Americas. At 2TB, its overall 9-10% slower than the 1TB model, but that still doesn't matter as we see it, based upon where it lands on the following chart: 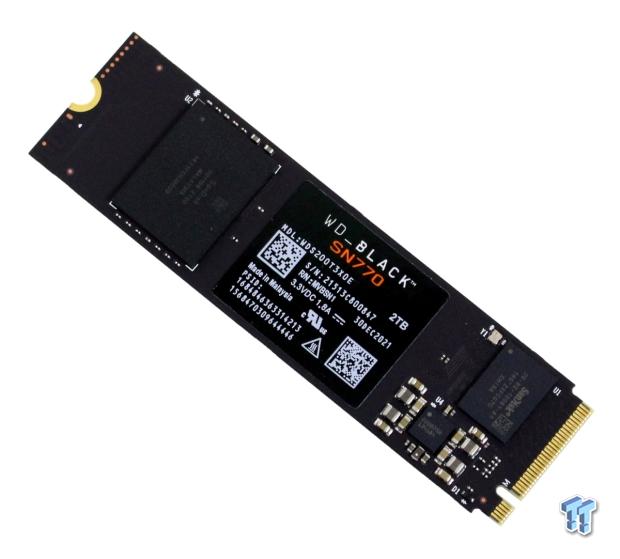 For Western Digital to do this with 1024Gbit flash on a single package, mind you, is even more incredible than doing it with 512Gbit flash. The 2TB model is almost as fast as the 1TB model, our current performance champion for the Americas, but offers twice the capacity. Even though it's DRAMless with only 4-channels to work with, we find it to be the most desirable flash-based SSD money can buy. Western Digital's WD Black SN770 2TB is TweakTown Elite and worthy of our highest award.

2TB of the most accomplished flash-based storage device ever made. You need this.